To compare the impact of the fusion of intraoperative transrectal ultrasound (TRUS) images with day 30 computed tomography (CT) and magnetic resonance imaging (MRI) on prostate volume and dosimetry.

When fusing TRUS images with CT and MRI, the differences in prostate volume between those modalities remain clinically important in nearly half of the patients, and this has a direct influence on how implant quality is evaluated.

As a modality of the evaluation of implant quality, magnetic resonance imaging (MRI) is becoming more and more widespread because of its superior ability to delineate the prostate from its surrounding tissue [1]. To evaluate the quality of the implant, dosimetry is done on a computed tomography (CT) scan performed 30 days (± seven days) following the procedure (day 30). An evaluation of dosimetry on CT is complicated because of the artifacts caused by the seeds, thereby triggering difficulties in delineating prostate borders. On the other hand, it seems impractical to use scarce medical resources to determine the quality of an implant, especially because it is done post-facto and since most published data on implant dosimetry and its correlation with clinical outcome have been done on CT [2].

Furthermore, it was our impression, after contouring on post-implant CTs for many years with residents and fellows, that a good implant does not depend so much on the skill of the person contouring. The contouring had little bearing on whether an implant was a good implant.

Similarly, it has been shown that implants considered as excellent quality on the day of the implant were not influenced by the degree of edema subsequently on days eight and 30 [3].

This present study aims to evaluate whether the fusion of images from an intraoperative trans-rectal ultrasound (TRUS) with MRI can improve the accuracy of prostate volume determination in postimplant dosimetry on day 30.

Seventy-five consecutive patients treated with I-125 permanent seed prostate brachytherapy (PB) from November 2013 to September 2014 were evaluated, of which six received 110 Gy as a brachytherapy boost to the external beam radiation therapy received. All the other patients received the standard 144 Gy dose.

Patients were treated with the FIRST system (Nucletron, an Elektra Company, Columbia, MD, USA) using TRUS-guided intraoperative interactive planning. For TRUS, the Flex Focus 400 (BK Medical, Peabody, MA, US) was used. The intraoperative prostate volume was contoured on 2.5-mm thick slices. To determine the prostate volume on TRUS, a three-dimensional TRUS acquisition in the treatment position was performed with two fixation needles inserted into the prostate. These needles have a special harpoon to avoid prostate movements as much as possible. The prostate volume was then contoured by one of the two treating radiation oncologists in the operating room.

On day 30 after implant, a CT and MRI were done. The CT scan was performed with 3-mm thick slices. The Fast Spin-Echo T2-weighted 1.5 T MR sequence was used according to Crook et al. [4].

A statistical analysis was done using SPSS 17.0 for Windows (IBM SPSS, Chicago, Illinois). Differences between groups were calculated using the student t-test. A difference of < .05 was considered statistically significant.

All differences in prostate volume between each other are P <.001 (student’s t-test).

Influence of difference in prostate volume on dosimetry

All differences in dosimetry between each other are P <.001 (student’s t-test). 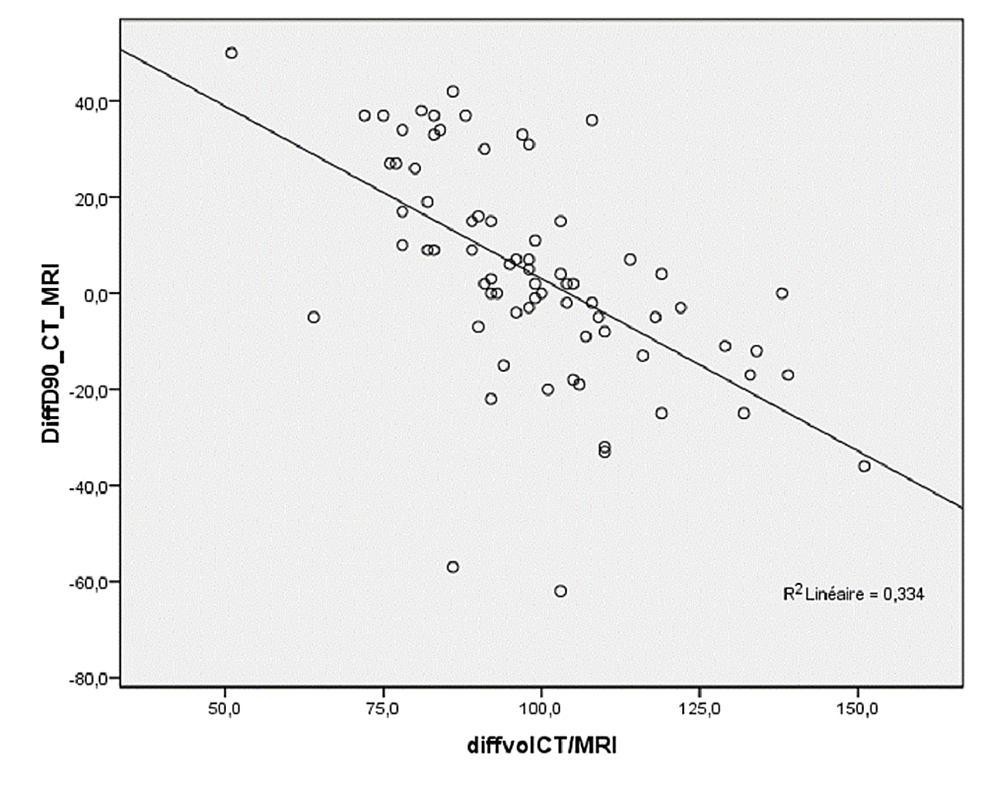 Whether an implant can be labeled “good” depends considerably on the imaging modality used for dosimetry evaluation. In our present study, only in a minority of patients did both dosimetry on MRI and CT agree on whether D90 was > 130 Gy or V100 > 90%.

To our knowledge, we are the first group to copy contours from the prostate on intraoperative TRUS and merge them with the CT and MRI on day 30 and, thus, to assure consistency in prostate volume definition. Superficially, this seemed to work well with an average difference in prostate volume between TRUS and CT of only 8.1% and between TRUS and MRI of 5.9%. The mean difference between CT and MRI was even smaller, with a difference of 1.4%. The large standard deviations of differences in prostate volume between imaging modalities in 35%-49% of patients where the difference was larger than +-10% were surprising to us and underline the inherent difficulties in evaluating postoperative dosimetry: reporting implant quality depends very much on imaging modality and the observer. Unfortunately, we did not perform an interobserver variability analysis that could have shown which imaging modality has less interobserver variability.

We were able to show that this difference in prostate volume matters and why an exact definition of the prostate volume is so important; the difference in prostate volume between CT and MRI was significantly inversely correlated to D90 (r = -0.58, P < .001). Our study contributes to the ongoing debate on whether D90 is predictive of biochemical outcome [5-6]. We were able to show, not surprisingly, that despite great efforts to identify the prostate correctly with the help of adding the intraoperative TRUS, D90 was still very variable. Therefore, our study underlines the need for each center to evaluate their way of contouring the prostate on their postoperative CT or MRI and analyze whether dosimetry in their center predicts outcomes.

In a very interesting and similar paper, Bowes et al. [7] compared TRUS-CT fusion with CT-MRI fusion in 20 patients. Their study differentiates from ours in that CT and MRI were manually fused on seed positions, while we merged on the prostate itself. Bowes et al. fused the TRUS-CT images on the urethral position overlying sagittal positions [7]. We believe that their CT-MRI fusion on the seed position is advantageous compared to our technique, but such a fusion was not technically possible with our software. On the other hand, we believe that their TRUS-CT fusion was less optimal because the urethra position and curvature can change significantly with the catheter position. They found that six of 20 patients had a difference of at least 5% in D90 between MRI and TRUS. Contrary to our findings, a difference in V100 of > 5% was present in only one patient.

It has been recognized that there is significant variability in contouring structures, even among experts in the field. Therefore, there are efforts to develop tools to account for contouring uncertainty, to quantify experts’ level of agreement, and to estimate a consensus structure [8]. MRI, especially on 3.0-Tesla, has been shown to have less interobserver variability than contouring on CT, especially at the level of the prostate base [9]. Automated atlas-based segmentation algorithms have been created to aid in the delineation of target volumes. An “atlas” of expertly contoured CT images for different organs has been created as a model and guide for target volumes' delineation. In one study, there was a moderate agreement (dice similarity coefficient (DSC) 0.71) for prostate contour values contoured by an expert genitourinary radiation oncologist compared to CT atlases [10]. It has been long recognized that prostate volume estimation on MRI and CT is very observer dependent, as is its influence on prostate dosimetry [11].

Crook et al. analyzed 10 patients treated with PB. Prostate contouring was done on MRI and CT [4]. They found an average variation in the prostate volume of 4.1 to 5.9 cubic centimeters (cc). Interestingly, similarly to the results of our study, they found a small mean difference in prostate volume.

The principal investigator who had the preplan TRUS at his disposition found a 2.6 cc (SD, 1.6 cc) difference between preplan TRUS and CT at one month. Again, similar to our study, the impact of contours on dosimetry was considerable; V100 on CT compared to MRI-CT fusion differed by only 2.4% for the experienced brachytherapist but differed by 4.4% and 9.1% when contoured by experienced radiation oncologists without PB experience. The influence on D90 was 9.3 Gy for the brachytherapists and 14.4 Gy and 30.3 Gy for the other two radiation oncologists.

Others compared prostate volume on TRUS with MRI, without a direct fusion of the two modalities, as in our study. Chung et al. found that TRUS significantly overestimates prostate volume compared to MRI, on average by 15% (SD 25%) [12]. This was even more pronounced in smaller prostates, where it can be as high as 36%.

Other disease sites have similar issues in defining the target depending on the imaging modality. A recent comparison of 23 experts in gynecological radiation oncology on three different cases of cervical cancer showed considerable differences, especially for MRI-based contours. The conformity index was higher for CT-based contours. In general, the conformity index between experts ranged from 0.37 to 0.48 and was slightly better for CT. MRI-based contours were consistently smaller than CT contours, but CT contours were more similar [18].

Although this was not evaluated in this present study, we believe that MRI reduces interobserver variability in prostate contouring.

We further believe that every center practicing PB should establish its standard of care by determining if implant quality is well evaluated whether on CT alone or in combination with MRI to be able to compare their results to those in the literature.

Despite the use of intraoperative TRUS images to determine the prostate volume on day-30 MRI and CT, differences between both modalities remained clinically significant in nearly half the patients. This difference had a direct influence on the value of D90. ’Even though many advances have been made in prostate imaging in the last few years, the exact determination of prostate contours remains a major challenge and is essential to evaluate implant quality.

We thank Amal Nadiri, PhD, for her help in preparing the manuscript.

© Copyright 2018
Delouya et al. This is an open access article distributed under the terms of the Creative Commons Attribution License CC-BY 3.0., which permits unrestricted use, distribution, and reproduction in any medium, provided the original author and source are credited.

All differences in prostate volume between each other are P <.001 (student’s t-test).

All differences in dosimetry between each other are P <.001 (student’s t-test).