Thermography is a form of radiography that images the skin surface temperature. Thermograms are pictorial representations of thermal maps of the entire body’s outer surface. Thermography was applied as an attempt to evaluate its usefulness in the diagnosis of chronic sinusitis (CS). Hence, this study was done to determine the diagnostic value of thermography for patients suffering from CS.

Patients attending the Department of Otorhinolaryngology and Head and Neck Surgery over a two years' duration with symptoms suggestive of CS were included in this diagnostic evaluation study. X-ray paranasal sinuses (PNS) and nose, thermography of head and neck, and computed tomography (CT) of PNS and nose (axial and coronal sections) were performed on them. The thermograms and X-ray sinuses obtained were compared with the computed tomography of PNS findings.

Chronic sinusitis (CS) is one of the most common diseases that affect the majority of the population. It is a group of disorders characterized by the inflammation of the mucosa of the nose and paranasal sinuses (PNS) for at least 12 consecutive weeks [1]. Many possible diagnostic methods are available to confirm the diagnosis of CS, but there is no consensus reached on the best-available, most cost-effective diagnostic method. A plain sinus radiograph is a commonly used initial diagnostic test but not of much diagnostic value. Computed tomography (CT) of paranasal sinuses (CT PNS) scans have been very helpful in diagnosing and assessing the severity of the disease. CT PNS is the gold standard test for both confirming diagnosis and assessing the response to the treatment of CS [2-3]. But there is a risk of radiation exposure, and it is an expensive investigation. Magnetic resonance imaging (MRI) scans have limited usefulness in the diagnosis of CS, as they are too sensitive in assessing the mucosal lesion and lack bony details needed for surgical treatment.

Thermography is a form of radiography that images the skin surface temperature. Thermograms are pictorial representations of thermal maps of the entire body’s outer surface. The principle behind thermography is to detect and measure variations in the heat emitted by the body in the form of infrared radiation and convert them into electrical signals [4]. The electrical impulses are fed into the computer, which analyzes the temperature and vascular changes, thereby producing high-resolution images [4-6]. The thermogram images are recorded photographically, thereby diagnosing the diseased conditions. The images of hotter areas in the body appear red and the colder areas appear blue in color. Areas of normal temperature appear green in color. In this study, thermography was applied as an attempt to evaluate its usefulness in the diagnosis of CS. This study was done to determine the diagnostic value of thermography for patients suffering from CS.

Patients attending the Department of Otorhinolaryngology and Head and Neck Surgery over a two years' duration with symptoms suggestive of CS (Rhinosinusitis Task Force's criteria) were included in this diagnostic evaluation study. Children below 15 years of age, patients with facial trauma, nasal masses, nasal polyposis, and unwilling candidates were excluded from the study. This study was approved by the Institute Ethical Committee. Detailed history and clinical examination were done followed by diagnostic nasal endoscopy (DNE) in all the patients with suspected CS. As an initial investigation, digital X-ray PNS and nose (Water’s view) was done followed by thermography of the head and neck. Before doing the thermographic imaging, patients were allowed to rest at a room temperature of 28oC. This was to achieve body temperature equilibrium with the surrounding ambient temperature and to fix all the variables that might influence the thermal imaging of the head and neck.

An infrared thermal camera was positioned one meter away from the patient’s head. Thermography of the head and neck was performed using a high-resolution digital, non-contact thermographic camera, MED2000 Elite Iris (Meditherm Inc. Digital Infrared Thermal Imaging, Cheyenne, WY, USA). The standard views - frontal view, frontal view with open mouth, right lateral, and left lateral views were taken. A thermal difference of 0.5°C between the homologous regions of the face or a difference of 0.5°C compared to the surrounding area with color change was taken as the criterion for abnormality [7]. CT PNS (axial and coronal sections) was also performed on all patients included in the study. The CT machine used in our study was the Pro-Speed Plus 4 Slice Multidetector CT machine (GE, Boston, MA, USA). The sections were taken with a slice thickness of 5 mm. In our study, CT PNS imaging with 4 mm or more mucosal thickening in the sinus cavity was taken as positive for CS [8]. Each sinus was studied separately, and data were collected. In thermography, sinuses that showed red color were taken as positive for sinusitis (Figure 1). 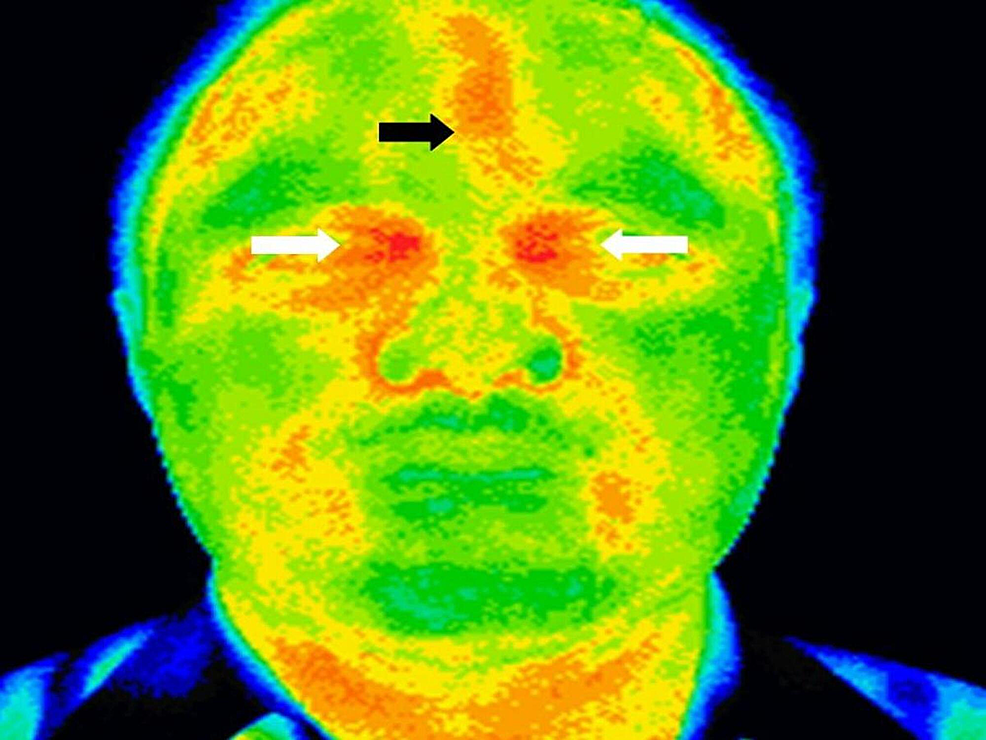 In a digital X-ray PNS, haziness rather than orbit was taken as positive for sinusitis. The thermography results and digital X-ray PNS results obtained were compared with the results of the CT PNS findings. Open Epi version 3 Software (Centers for Disease Control and Prevention, Atlanta, Georgia, USA) was used for analysis and the test applied was the Wilson score test. 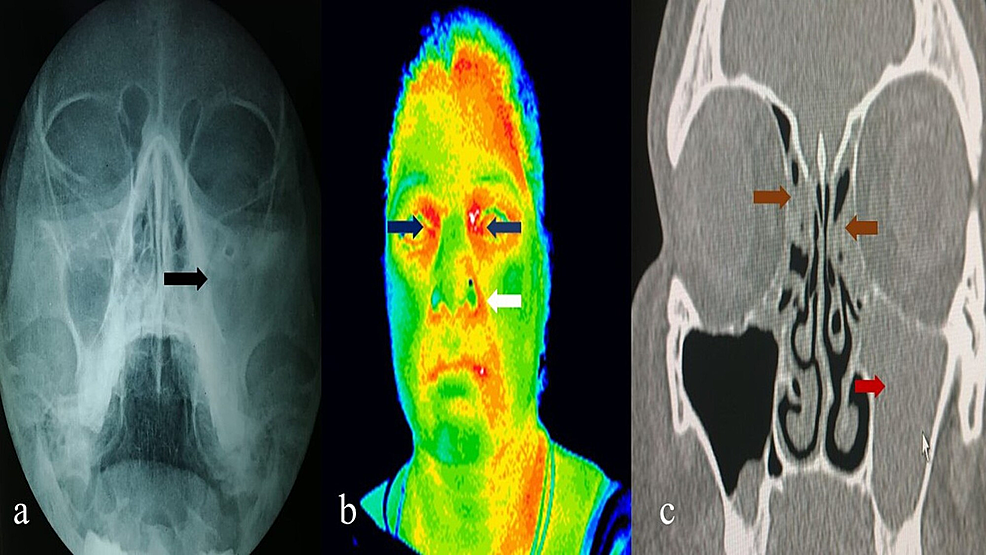 Inflammatory processes are characterized by high temperature, which is the basis for the use of thermography in medical practice. Thermography has principle application in screening and diagnosing breast diseases and in arteriovenous diseases [4-6]. In both fields, thermography has been used as the screening method and to assess the treatment response [9-10]. The use of thermography in the diagnosis of CS has been seldom reported in the literature. In the literature, there was a study concerning its use in PNS diseases [4,11]. Thermography provides information regarding the functional aspects and does not give information about the morphological characteristics of the sinuses.

The role of thermography is only supplementary to other techniques, as it is a test of physiology that alone is not sufficient for physicians to make or confirm a diagnosis. The limitations associated with the wide application of infrared thermography in research include the expertise required to interpret the results and the need for doing the test in a highly controlled environment. The specificity of this modality is less, but it can be compensated by correlating with a clinical examination, which can enhance its diagnosing ability. The limitation of the study was the relatively smaller sample size of the study population.

The advantages of thermography are early detection and its radiation-free, non-invasive, painless, and cost-effective modality. Correctly done thermography provides helpful information about sinus diseases without the risk of radiation exposure. Thermography does not supersede CT and X-ray scanning or other necessary methods of diagnosis for CRS. Infrared thermography is a good supplemental test and further large-scale research is necessary to determine whether it can be used as a diagnostic tool for diagnosing CRS.

Thermal imaging is a harmless imaging method that can be easily implemented in routine clinical practice. We conclude that thermography is a useful supplementary investigation in gaining information regarding sinus diseases. However, it should not be considered as a standalone diagnostic tool in itself but interpreted in conjunction with other clinical clues in the patient’s history and examination findings.

© Copyright 2018
Kalaiarasi et al. This is an open access article distributed under the terms of the Creative Commons Attribution License CC-BY 3.0., which permits unrestricted use, distribution, and reproduction in any medium, provided the original author and source are credited.