The purpose of this study is to determine the effects of obesity on perioperative outcomes in OLLIF, MIS-TLIF, and TLIF.

This is a retrospective cohort study.

We included patients who underwent OLLIF, MIS-TLIF, or TLIF on three or fewer spinal levels at a single Minnesota hospital after conservative therapy had failed. Indications included in this study were degenerative disc disease, spondylolisthesis, spondylosis, herniation, stenosis, and scoliosis.

Obesity is a major public health concern around the world. According to the World Health Organization and the National Institute of Health, individuals with a body mass index (BMI) of 30.0 or above are considered obese, and those with a BMI of 40.0 are considered morbidly obese. Today, 37.7% of Americans are obese, and 7.7% are morbidly obese [1]. Obesity is associated with increased all-cause mortality [2] and increased risk for a wide variety of health conditions including lower back pain [3]. Lower back pain remains one of the more prevalent and expensive health conditions in the Western world [4,5] with up to 80% of all people suffering from it at some point in life. According to a recent meta-analysis, obesity is associated with an increased prevalence of lower back pain (odds ratio [OR] = 1.33), and an even larger increase in the likelihood of seeking care for lower back pain (OR = 1.53) [6]. Lower back pain may increase sedentary lifestyle, which can lead to further increases in BMI.

Lumbar fusions are one of the mainstay surgical treatments for lower back pain and have become one of the more common surgical procedures in the United States [7]. Fusions performed on obese patients are associated with increased complication rates mostly related to wound site infections [8,9]. As a result, obese fusion patients require longer hospital stays and are more expensive to treat than non-obese patients [9]. Spine surgery in obese patients is generally considered more technically challenging than in non-obese patients. Some surgeons may refrain from offering surgical treatment to patients with higher BMI due to concerns about these technical challenges.

In this study, we compare the impact of obesity on perioperative outcomes in patients who underwent transforaminal lumbar interbody fusion (TLIF), minimally invasive-TLIF (MIS-TLIF), and oblique lateral lumbar interbody fusion (OLLIF). TLIF is the most commonly performed open fusion technique on the lumbar spine today. In 2005, MI-TLIF was described as a mini-open approach to TLIF [10]. OLLIF is a recent innovation for performing lumbar fusions [11]. In OLLIF, the disc is approached through Kambin’s triangle using bilateral fluoroscopic imaging and electrophysiology to guide the approach. Variations of OLLIF enable a surgeon to approach technically difficult areas such as L5-S1 [12] and the thoracic region [13].

MIS fusions of the lumbar spine have been shown to be effective in obese patients [15,17,18], but scant evidence is available on how obesity impacts the benefits of MIS fusions relative to open fusions. Here, we compare the effects of obesity on perioperative outcomes for TLIF, MIS-TLIF, and OLLIF in a series of 321 patients in a single hospital setting.

Patients were considered candidates for surgery if conservative therapy had failed. Indications included in this study were degenerative disc disease, spondylolisthesis, spondylosis, herniation, stenosis, and scoliosis. Patients were included in this study if their surgery involved three or fewer levels. Patient demographics are provided in Table 1.

Data were collected in the hospital EMR and exported for analysis. The differences between study groups were tested using analysis of variance (ANOVA) with equal variance assumptions for continuous variables and Chi-Squared tests with Yates correction for continuity. To determine the effects of BMI on surgery time, multivariate regression was performed. Statistical analysis was performed in R Version 3.4.1.

Study groups did not differ significantly in terms of gender or BMI (Table 1). OLLIF patients were slightly younger than MIS-TLIF and TLIF patients. The distribution of surgical levels differed significantly between the three procedures. To account for these differences between the study groups, we corrected for number of levels, age, and sex in the subsequent multivariate analysis.

All values are mean (SD).

We ran a multivariate regression to determine the effects of BMI on surgery time, blood loss, and length of stay, controlling for age, sex, and the number of levels fused. The effect of BMI on surgery time is shown in Table 3 and the relationship between surgery time and BMI for single-level fusions is illustrated in Figure 1. BMI has positive effects on surgery time for all procedures, but this effect varies in size and statistical significance. More specifically, a one-point increase in BMI increased surgery time by 0.56 ± 0.47 minutes (p = 0.24) in the OLLIF group, by 2.8 ± 1.43 minutes (p = 0.06) in the MIS-TLIF group, and by 1.7 ± 0.43 minutes (p < 0.001) in the TLIF group. Table 4 demonstrates the effect of BMI on blood loss. BMI has positive effects on blood loss for TLIF (p < 0.001) but not for OLLIF (p = 0.68) or MIS-TLIF (p = 0.67). BMI does not have significant effects on length of hospital stay for any procedure (results not shown).

Table 3: Regression coefficients for the effect of BMI on surgery time. 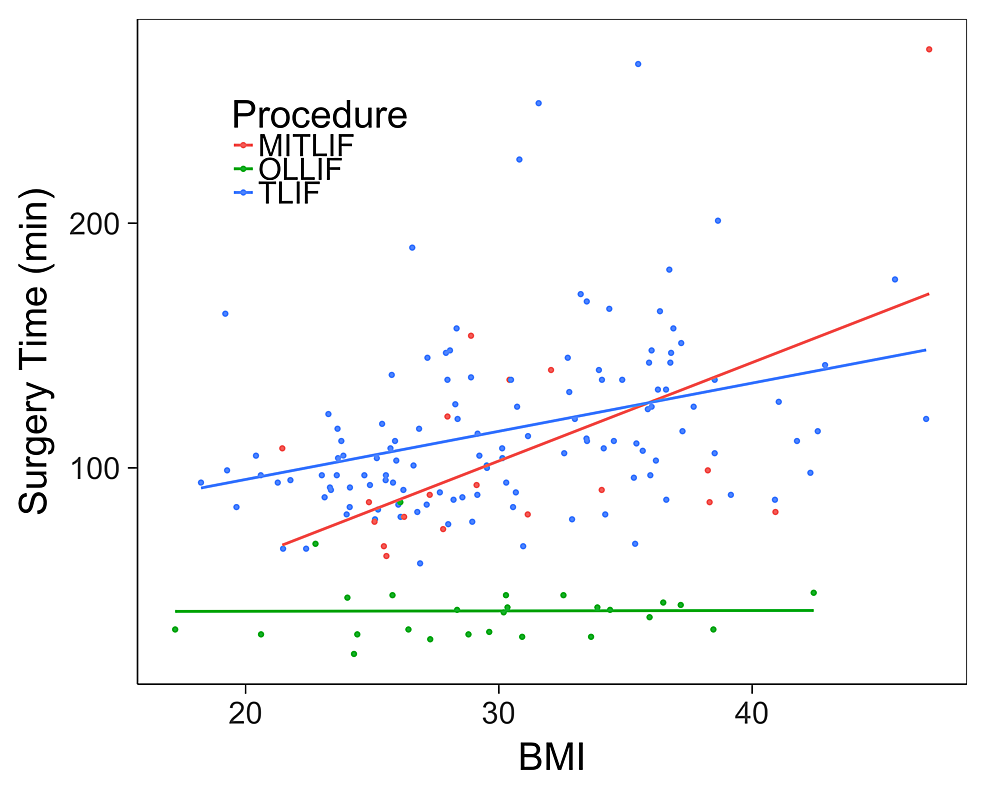 The surgery time and BMI of each 1 level procedure for OLLIF (green), MI-TLIF (red), and TLIF (blue). Univariate regression lines are plotted for reference.

Table 4: Regression coefficients for the effect of BMI on blood loss.

We found that OLLIF significantly reduces blood loss relative to TLIF, a finding that is consistent with the literature on minimally invasive fusions [14]. MIS fusions decrease blood loss due to the use of smaller incisions, reduced dissections of muscles and soft tissue, and avoidance of epidural bleeding. Additionally, OLLIF does not require osteotomies during approach, further limiting blood loss. Unlike other MIS fusions, OLLIF also reduces surgery time relative to open equivalents. This finding is consistent with the results from our previous study [11]. This result is important because a clear correlation has been established between surgery time and surgery/anesthesia-related complications [19-21]. Therefore, OLLIF may avoid the increase in complication rates generally associated with surgery in obese patients.

In contrast to OLLIF, MIS-TLIF does not significantly reduce surgery time relative to TLIF. This finding is consistent with the literature on mini-open approaches as MIS-TLIF is not generally associated with reduced surgery time [16]. We also found no statistically significant difference in blood loss between MIS-TLIF and TLIF. This finding is not consistent with the literature on mini-open fusions. However, this result may be due to the small size of the MIS-TLIF study group. Notably, there were only eight cases in the two-level MIS-TLIF group, with one patient losing 800 mL of blood, which skewed the overall statistics.

For TLIF and MIS-TLIF, surgery times increase significantly with increasing BMI, which is consistent with other studies [22]. For OLLIF however, the effect of BMI on surgery time was much smaller and not statistically significant. In TLIF, the spine must be exposed and directly visualized. For obese patients, more time must be spent dissecting tissue during approach, and closure may also require more time. For OLLIF on the other hand, no dissection of soft tissues is required. The probe that is used to access the disc space can be advanced quickly through the subcutaneous layers of fat, muscle, and fascia. The surgeon then inserts the working tube, creating a sealed connection from the skin to the disk space. As subsequent tools are fed through the working tube, obesity does not affect the difficulty of the OLLIF procedure. The OLLIF approach may even be easier when performed on an obese patient because the perineural fat creates a cushion around the nerve root, lowering the risk of nerve injury in moderately obese patients.

Other MIS fusions approach the spine anteriorly. Anterior approaches have been demonstrated to improve patient outcomes relative to posterior approaches because posterior muscle groups are left intact [23]. Unfortunately, access to the lumbar spine from an anterior angle is difficult because the surgeon must traverse abdominal or retroperitoneal structures, which often requires an access surgeon. In morbidly obese patients, these approaches may be extremely difficult. OLLIF combines the advantages of anterior fusions with a simpler approach that is not significantly affected by obesity.

Previous studies have shown that the perioperative costs of spinal fusions are increased for obese patients [9], while minimally invasive procedures may reduce costs due to decreased surgery time and hospital stay [24].

This study’s key limitation is that no clinical outcome data were collected. Therefore, it remains to be seen whether reduced surgery time would also deliver improved patient outcomes. Furthermore, the study’s setting was a single hospital in Minnesota. Further evaluation is required to understand whether the results of this study can be generalized and applied to other settings. Finally, this study is also limited because it is a retrospective analysis.

Perioperative outcomes in OLLIF are not affected by obesity. Therefore, OLLIF may significantly reduce the additional costs associated with performing lumbar fusions on obese patients.

Human subjects: Consent was obtained by all participants in this study. Animal subjects: All authors have confirmed that this study did not involve animal subjects or tissue. Conflicts of interest: In compliance with the ICMJE uniform disclosure form, all authors declare the following: Payment/services info: All authors have declared that no financial support was received from any organization for the submitted work. Financial relationships: Hamid R. Abbasi declare(s) personal fees from Zyga. Hamid R. Abbasi declare(s) a grant and personal fees from AMW Spine LLC. Intellectual property info: Hamid R. Abbasi has a patent pending for an OLLIF cage. Other relationships: All authors have declared that there are no other relationships or activities that could appear to have influenced the submitted work.

© Copyright 2018
Abbasi et al. This is an open access article distributed under the terms of the Creative Commons Attribution License CC-BY 3.0., which permits unrestricted use, distribution, and reproduction in any medium, provided the original author and source are credited.

The surgery time and BMI of each 1 level procedure for OLLIF (green), MI-TLIF (red), and TLIF (blue). Univariate regression lines are plotted for reference.

All values are mean (SD).

Table 3: Regression coefficients for the effect of BMI on surgery time.

Table 4: Regression coefficients for the effect of BMI on blood loss.