Online adaptive radiotherapy (ART) with frequent imaging has the potential to improve dosimetric accuracy by accounting for anatomical and functional changes during the course of radiotherapy. Presented are three interesting cases that provide an assessment of online adaptive magnetic resonance-guided radiotherapy (MRgRT) for lung stereotactic body radiotherapy (SBRT).

The study includes three lung SBRT cases, treated on an MRgRT system where MR images were acquired for planning and prior to each treatment fraction. Prescription dose ranged from 48 to 50 Gy in four to five fractions, normalized to where 95% of the planning target volume (PTV) was covered by 100% of the prescription dose. The process begins with the gross tumor volume (GTV), PTV, spinal cord, lungs, heart, and esophagus being delineated on the planning MRI. The treatment plan was then generated using a step-and-shoot intensity modulated radiotherapy (IMRT) technique, which utilized a Monte Carlo dose calculation. Next, the target and organs at risk (OAR) contours from the planning MRI were deformably propagated to the daily setup MRIs. These deformed contours were reviewed and modified by the physician. To determine the efficacy of ART, two different strategies were explored: 1) Calculating the plan created for the planning MR on each fraction setup MR dataset (Non-Adapt) and 2) creating a new optimized IMRT plan on the fraction setup MR dataset (FxAdapt). The treatment plans from both strategies were compared using the clinical dose-volume constraints.

Online adaptive MR-guided lung SBRT can provide better target conformality and homogeneity and OAR sparing compared with non-adaptive SBRT in selected cases. Conversely, if the PTV isn’t adjacent to multiple OARs, then the benefit from ART may be limited. Further studies, which incorporate a larger cohort of patients with uniform prescriptions, are needed to thoroughly evaluate the benefits of daily online ART during MRgRT.

Lung stereotactic body radiotherapy (SBRT) has proven to be effective in the local control of lung tumors [1]. However, significant motion of the lesion, motion of the organs at risk (OAR), as well as their proximity to the lesion and alterations to the anatomy, and motion characteristics throughout the course of treatment make radiation therapy of lung tumors challenging. Online adaptive radiotherapy (ART) has recently become available with the arrival of MR-guided radiotherapy (MRgRT) devices, which allow for both high-resolution three-dimensional (3D) magnetic resonance imaging (MRI) scans, allowing for accurate daily visualization of the disease and OARs, as well as real-time cine imaging to accurately gate a radiation treatment in the proper phase of the respiration cycle. Utilizing MR-guided ART has the potential to improve target coverage and to provide better OAR sparing by using the daily 3D MRI to account for anatomical and functional changes and adapt the plan to deliver the optimal treatment for that day [2-4].

The benefit of online ART using MRgRT systems has been demonstrated for several types of cancer but only limited experience with lung SBRT ART has been published [2]. Work by Henke et al. investigated the potential benefits of the simulated online ART MRgRT for five central thorax and five non-liver abdominal cases. For thoracic cases, the results revealed that common OAR violations were the trachea and esophagus. Increased PTV coverage in 21 of 30 fractions was obtained. Furthermore, additional OAR sparing was achieved in 63% fractions while escalating the dose to PTV.

The MRgRT system by Viewray™ (ViewRay, Inc., Cleveland, OH, USA) has been described previously but briefly consists of a 0.35-Tesla split-bore design MRI scanner with three Cobalt-60 sources separated by 120 degrees mounted on a ring gantry [5]. Each of the three Cobalt-60 sources utilized a dual-focused multileaf collimator (MLC) with 1.05 cm leaf thickness; when all three heads are treating simultaneously, the nominal dose rate is 550 cGy/minute. The real-time MRI capabilities of the system allow for soft tissue imaging throughout radiation therapy (RT) delivery and the IMRT delivery is achieved by a “step-and-shoot” technique. The MRI system is a vertically gapped (double donut) horizontal solenoidal superconducting 0.35 T whole-body MRI. The split gradient coil has an inner diameter of 80 cm with a maximum gradient strength of 18 mT/m and a maximum slew rate of 200 T/m/s.

For all patients, a deep inspiration planning MRI and a planning computed tomography (CT) were collected at the time of simulation where the MRI was utilized for treatment planning. The electron density was deformably propagated from the CT to the planning MRI and was reviewed by a medical physicist. The treatment planning targets and OARs were contoured by an experienced radiation oncologist and a GTV to PTV expansion of either 3 mm or 6 mm was utilized for planning. Step-and-shoot IMRT plans were created using a single-isocenter, typically seven or nine beam groups (19 - 25 beam angles), avoiding beams that pass through the couch edges. Monte Carlo dose calculations with a 3 mm dose grid were employed by the treatment planning system (TPS), and all plans included the influence of the 0.35 T magnetic field on the radiation dose calculation. Real-time MRI-guided gating was utilized during treatment delivery to ensure that the treatment planning target was within the treatment field. 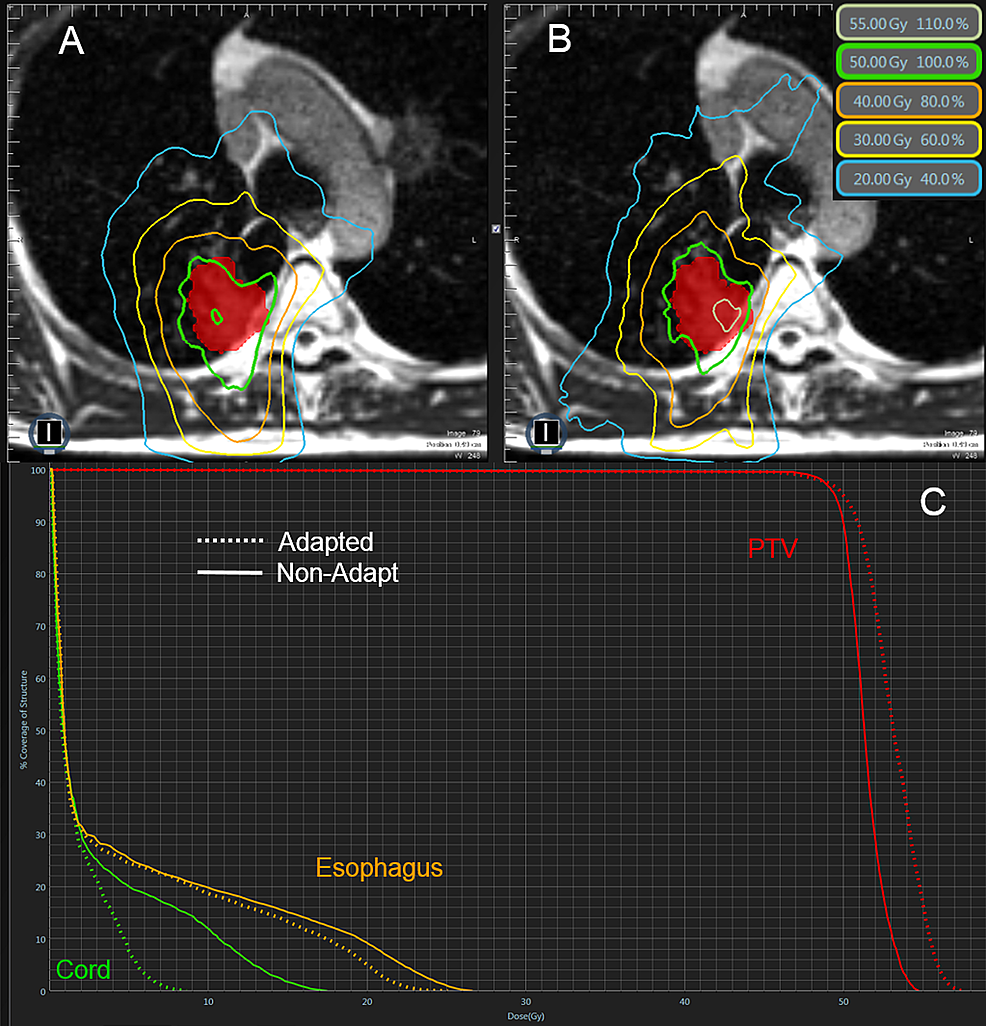 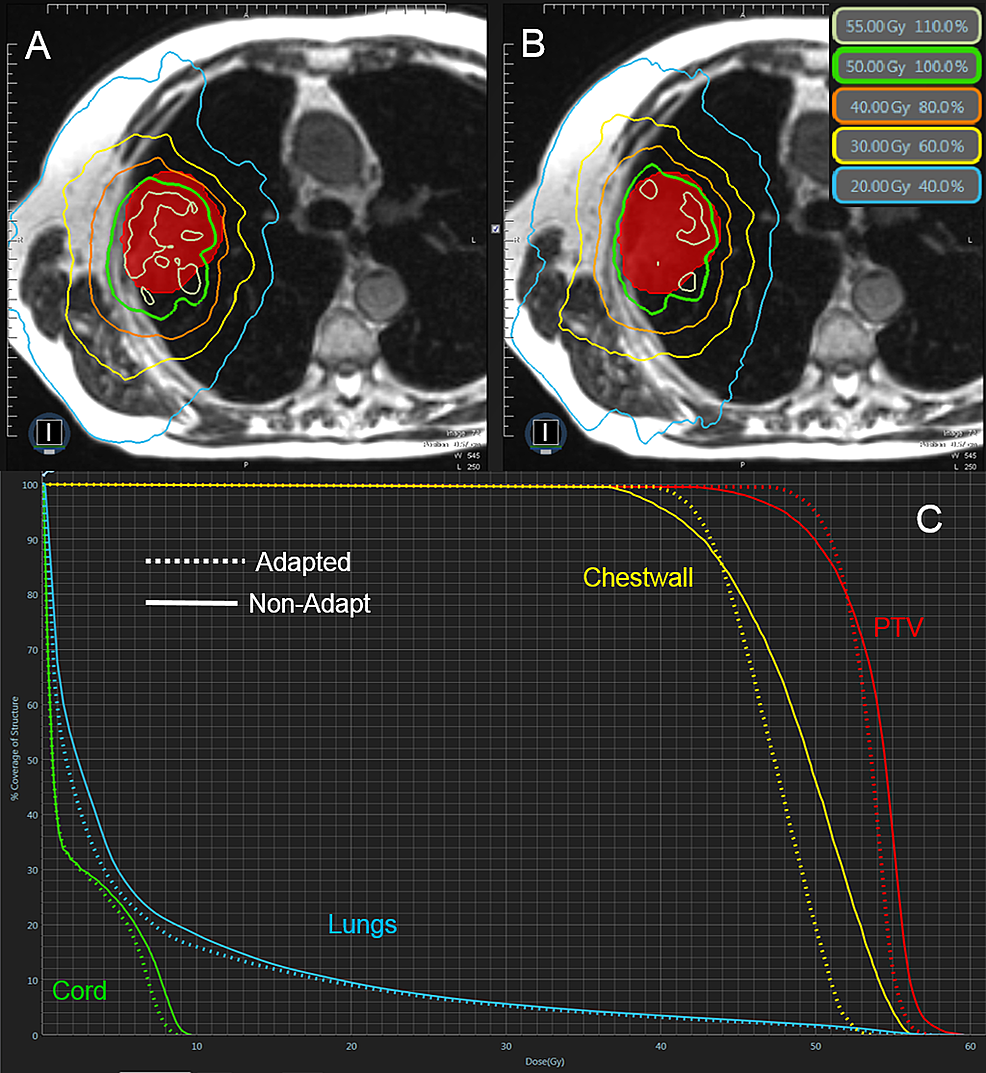 Case 3 was different than the other two examples in that it was a smaller (2 cc) peripheral lesion that was not adjacent to another OAR other than the proximal bronchial tree (PBT). The prescription dose was to deliver 48 Gy in four fractions where 95% of the PTV was to receive 100% of the prescribed dose. The initial plan, the Non-Adapt, and FxAdapt plans all satisfied the PTV coverage constraints. The FxAdapt fractions were slightly cooler (Dmax average 55.0 Gy) than the Non-Adapt fractions (Dmax average 53.5 Gy). Similarly, the max dose constraint of 39 Gy to the PBT was achieved for all Non-Adapt (average 16.5 Gy) and FxAdapt fractions (14.4 Gy) (Figure 3). 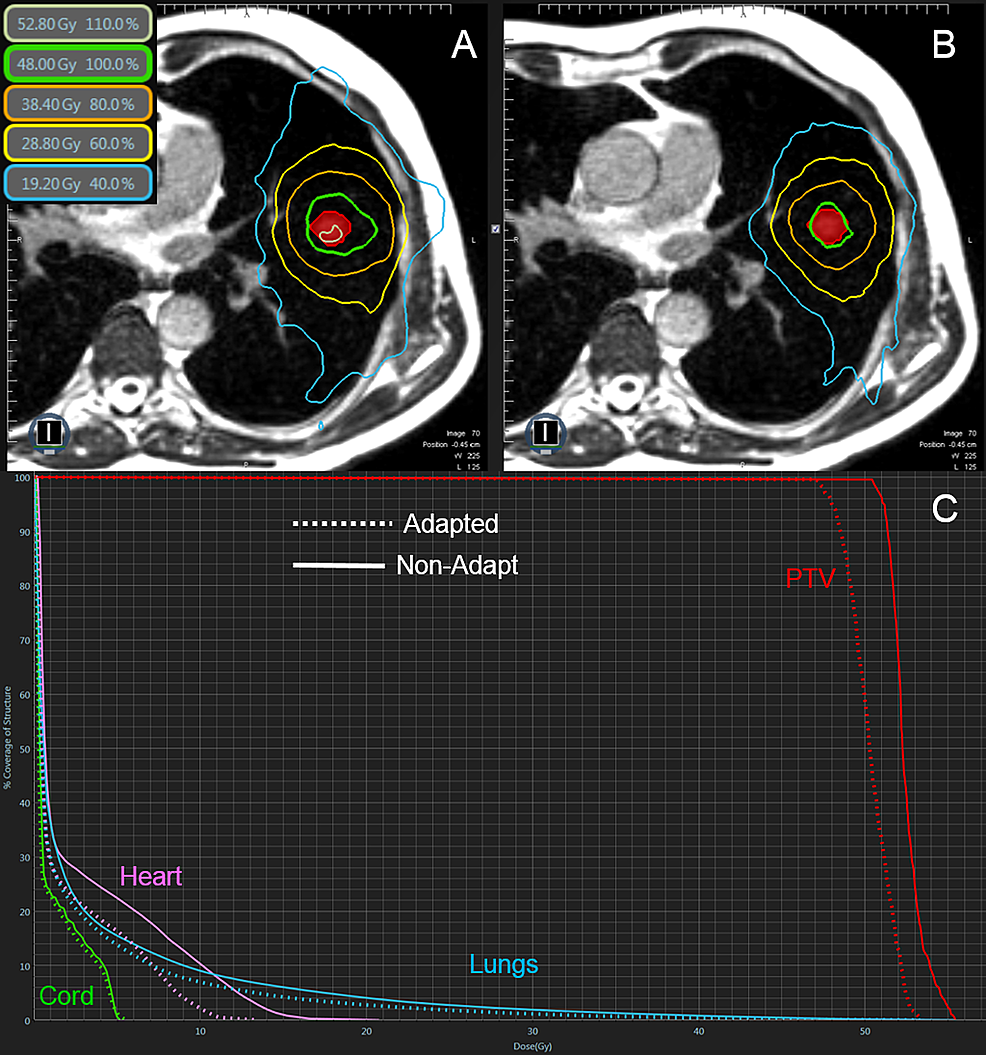 There are several limitations in our study, namely, the small population size, diverse prescription doses, variable OAR constraints, and diverse tumor characteristics (such as varied histology, staging, and diverse locations within the lung). Additionally, Linac-based MRgRT systems have become available which have significant dosimetric advantages over the Cobalt-60-based MRgRT system used in this study. While the dosimetric properties of a Linac-based system are superior, the relative benefits one experiences from ART strategies should be independent between the two modalities. Therefore, our experiences should translate to those institutions that have access to the Linac-based MRgRT systems. To fully answer the question as to how much of a benefit MR-guided ART provides to lung SBRT patients, a more comprehensive study should be designed. It is our hope that the interesting cases presented here will help enlighten those that wish to treat these complicated cases and those that wish to design future studies.

For certain lung SBRT patients, ART strategies have significant benefits when using MRgRT systems while others have more subdued or negligible benefits. From these few examples, having several OARs adjacent to the PTV is the strongest indicator of deriving a benefit from ART. In these cases, only slight changes in volumes or relative positions between the PTV and the OARs resulted in significant differences in both PTV coverage and OAR dose. In cases where the PTV coverage and constraints can be met without adaptation, further OAR sparing is a benefit of ART and potentially allows for dose escalation strategies. While our findings are consistent with the limited publications in this area, the work presented here focuses on lung tumors. Nevertheless, from our work and previously published studies, there is a consistent message that ART techniques combined with MRI guidance often achieves better PTV coverage and OAR sparing. In essence, online ART using MRgRT has the potential to provide better target conformity and OAR sparing for lung SBRT treatments allowing for dose escalation. Future studies are needed to confirm and characterize these potential benefits.

© Copyright 2018
Padgett et al. This is an open access article distributed under the terms of the Creative Commons Attribution License CC-BY 3.0., which permits unrestricted use, distribution, and reproduction in any medium, provided the original author and source are credited.

A Prospective Study on the Predictability of Propofol Injection Pain