Cite this article as: Iwanaga J, Tubbs R (January 28, 2018) Palatal Injection does not Block the Superior Alveolar Nerve Trunks: Correcting an Error Regarding the Innervation of the Maxillary Teeth. Cureus 10(1): e2120. doi:10.7759/cureus.2120

Anesthetic blockade of the posterior superior alveolar (PSA) branch of the maxillary nerve has played an important role in the endodontic treatment of irreversible acute pulpitis of the upper molar teeth except for the mesiobuccal root of the first molar tooth [1, 2]. This procedure requires precise anatomical knowledge of the pterygopalatine fossa and related structures in order to avoid unnecessary complications and to make the blockade most effective.

The infraorbital nerve gives rise to middle superior alveolar (MSA) and anterior superior alveolar (ASA) branches. However, blockade of the greater palatine nerve (GPN) has been used, especially for periodontal treatment, to anesthetize the palatal mucosa, including the posterior part of the hard palate and its overlying soft tissues, anteriorly as far as the first premolar and medially to the midline, and palatal gingiva.

The superior alveolar nerves course lateral to the maxillary sinus and the GPN travels through the hard palate [1, 2]. However, regarding nerve blockade, the difficulty in understanding its three-dimensional anatomy has led some dentists and oral surgeons to develop two anesthetic blockades that are based on erroneous morphology. These blockades are known as the anterior and middle superior alveolar (AMSA) nerve block and palatal approach anterior superior alveolar (P-ASA) nerve block. Recently, schematic drawings and photographs of the AMSA nerve block have been shown in several reports [3, 4]. However, some of these have incorrectly depicted the palatal gingiva and mucosa as being innervated by the ASA and MSA branches of the infraorbital nerve and the upper teeth by the GPN. In addition, these have also shown the incisive canal as being supplied by the ASA.

With such a clinically significant error being propagated in the dental literature, we aimed to review this anatomy and investigate the origin of the anatomical misunderstanding. With an improved understanding of the anatomy of the innervation of the maxillary teeth, unnecessary anesthetic blockade will be avoided with resultant improved patient outcomes.

Anatomy of the greater palatine and nasopalatine nerves

The GPN is one of the branches of the maxillary nerve that enters the greater palatine foramen to travel within the oral cavity along the roof of the mouth. It travels downward and forward giving rise to numerous branches to the ipsilateral palatal mucosa, gingiva, and glands of the hard palate as it approaches the incisor teeth. The GPN communicates with the terminal branch of the nasopalatine nerve.

The technique of AMSA nerve block was first developed by Friedman and Hochman based on the description in the old literature that pulpal anesthesia can be accomplished from a palatal injection as documented by Fischer [5] in 1911 and Nevin [6] in 1927. The concept of the AMSA nerve block was conceptualized as “the ideal maxillary injection would produce a rapid onset of profound pulpal anesthesia for multiple teeth from a single needle penetration on palatal mucosa.” Although some literature has mentioned success with this technique [7], most studies have only compared the traditional syringe technique with the computed controlled delivery system [8].

Friedman and Hochman [9] illustrated the AMSA nerve block although this depiction was incorrect (Figure 1). 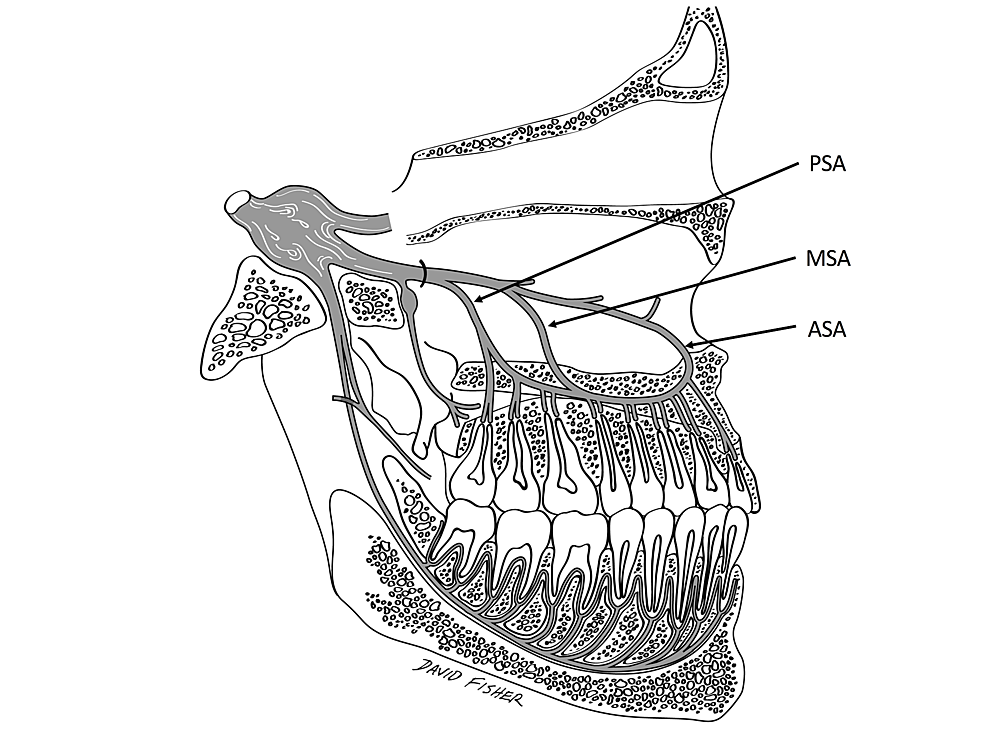 Figure 1: The PSA, MSA and ASA as depicted by Friedman and Hochman (1998) as if they innervate the teeth through the hard palate. The ASA is drawn as if it is the terminal branch of the infraorbital nerve.

In their drawing, the infraorbital nerve or maxillary nerve is shown as giving rise to branches to all of the maxillary teeth through the hard palate as if they traveled in a similar course as the GPN. Furthermore, in their drawing, the main trunk of the infraorbital nerve becomes the ASA as if it were the terminal branch of the infraorbital nerve. The course of the ASA in this figure might be confused with the pathway of the nasopalatine nerve toward the incisive foramen through the nasal septum. Therefore, this publication has added to the confusion of the course of the superior alveolar branches, GPN and nasopalatine nerve, and has probably resulted in patients undergoing unnecessary nerve blockade.

Concept of the P-ASA nerve block and misunderstanding

The P-ASA nerve block was proposed by Friedman and Hochman in 1999 [10] as a primary method to achieve bilateral pulpal anesthesia of the six anterior maxillary teeth. The objective of this injection is to put the needle at the entrance of the incisive canal and maintain contact with the inner bony wall with a depth of approximately 6 to 10 mm (Figure 2). 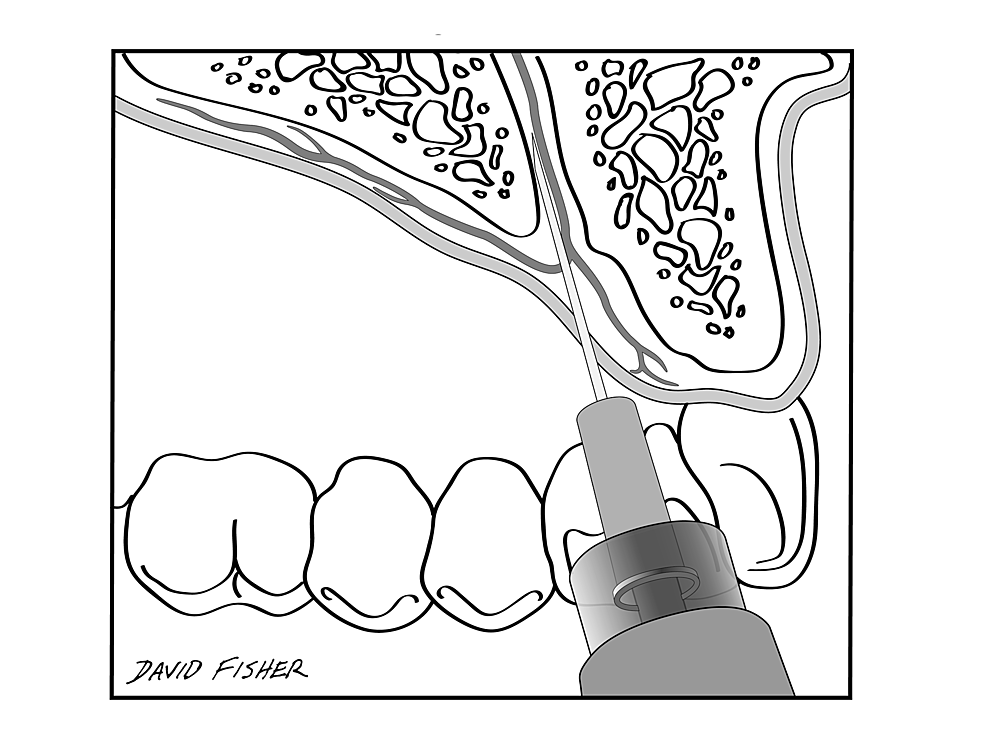 Figure 2: The proposed drawing of the P-ASA by Friedman and Hochman (1999).

Several studies have reported the effectiveness of AMSA nerve block in periodontal surgery and scaling and root planing (SRP) [3, 15-17]. However, the AMSA nerve block could anesthetize the palatal gingiva and periodontal ligament because its injection site corresponds to the course of the branches of the GPN which means the anesthetic solution is carried by the branches of the GPN and not by the AMSA. The blanching of the buccal gingiva could be achieved by diffusing the anesthetics into the buccal gingiva which would result in anesthesia during SRP [4]. The blanching of the buccal gingiva often occurs after infiltration anesthesia to the palatal gingiva so there is no evidence for the success of the AMSA nerve blockade.

Burns, et al. [20] reported a prospective, randomized, double-blinded study to evaluate the P-ASA nerve block using computer-assisted injection and this resulted in successful anesthesia in only 32 to 58% of patients. These outcomes, in terms of anatomy, make sense. A nerve block is defined as a local anesthetic solution placed near a main nerve trunk [21]. Neither AMSA nor P-ASA nerve blockade is near the main nerve trunk of the superior alveolar nerves (Figure 3). 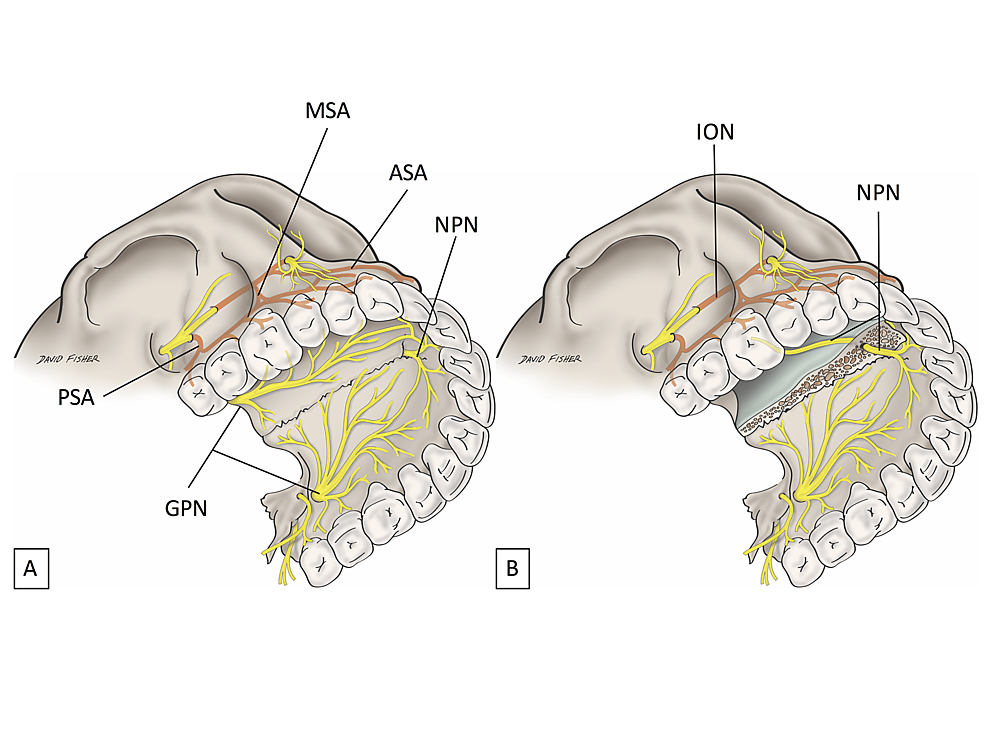 Tiny branches could exist between the GPN and AMSA branches and between the nasopalatine nerve and the ASA branch. However, if we revisit the anatomy of the maxilla, palate and nasal septum, it is easy to understand how many reports in the literature have made critical mistakes regarding AMSA and P-ASA nerve blockade.

The AMSA and P-ASA nerve blockades are not based on accurate anatomy. The term “AMSA” nerve blockade is infiltration anesthesia to the root of the anterior, canine and premolar teeth, and blockade of the branch of the GPN. This anesthesia might provide numbness to some extent, but this comes most likely from “infiltration anesthesia.” The term “P-ASA” nerve block is similar to the nasopalatine nerve block. The innervation of the maxillary teeth should be revisited in order to provide the best local anesthesia to patients without unnecessary injections and the potential for associated complications.

Figure 1: The PSA, MSA and ASA as depicted by Friedman and Hochman (1998) as if they innervate the teeth through the hard palate. The ASA is drawn as if it is the terminal branch of the infraorbital nerve.

Figure 2: The proposed drawing of the P-ASA by Friedman and Hochman (1999).

In Pursuit of the Most Effective Method of Teaching Feedback Skills to Emerg ...