Retrospective chart review of all palate reconstructions with ALT free flap from 2008-2017 by a single surgeon, at a tertiary academic institution. Patients with defects limited to the hard palate were selected for review.

Forty-eight patients were identified, of which 14 patients had limited palatal defects repaired with fascia lata free flaps and were selected for review. The average hospital stay for all patients was 2.8 days (range 1-4 days). Eighty-five percent of patients were started on an oral diet from post-operative day (POD) one. Ten of 14 were extubated at the end of the case, with four being extubated on POD one. One patient suffered donor site morbidity, which required intervention (one seroma requiring drainage). Two patients underwent minor palatal revisions with local tissue rearrangement for recurrent fistula. No patients suffered long-term velopharyngeal inadequacy (VPI) or dysphagia, and all reported normal nasal respiration.

Reconstructive options for standard head and neck defects have advanced steadily, while the palatal and maxillectomy defect has continued to present a varied challenge to the reconstructive surgeon. There remain a variety of distinct approaches for managing the maxillectomy defect, including obturator prosthesis placement, local tissue rearrangement, and a variety of free flap reconstructive options [1-2]. The challenge and general lack of agreement and uniformity with classifying defects involving the palate and maxilla exacerbate this difficulty.

Here, we describe the use of isolated fascia lata (FL) free flap for the reconstruction of limited hard palate and maxillectomy defects with a focus on short hospital stays and minimal access approaches. To our knowledge, this is the first case series describing this unique use and the long-term results.

Institutional review board approval was obtained, and a retrospective chart review was completed of all palatal reconstructions performed with the fascia lata and fasciocutaneous antero-lateral thigh free flap from 2008 to 2017, by the senior author at our institution.

Patient charts were reviewed and those with isolated hard palate defects were selected. Charts were reviewed for pertinent demographic data, extent and classification of defect, reconstructive technique, perioperative course, and follow-up results. Long-term functional results, revision surgeries, and any adjuvant therapy was also noted where appropriate. All patients within this case series underwent primary reconstruction with fascia lata free flap. Fascia lata is used for the hard palate as it mucosalizes rapidly, has limited bulk, and limits hair-bearing tissue within the oral cavity.

The fascia lata antero-lateral thigh free flap is harvested as a perforator flap containing both fascia and overlying skin, which is left in situ until the pedicle is completely isolated along its length. In our experience, retaining the skin paddle aids in manipulation of the flap during harvest, and prevents damage to the vascular plexus surrounding the fascia lata. Following isolation, the cutaneous and subcutaneous tissues are removed carefully, taking care to preserve the peri-fascial plexus blood supply which is mainly located on the superficial surface of the fascia lata (Figure 1). 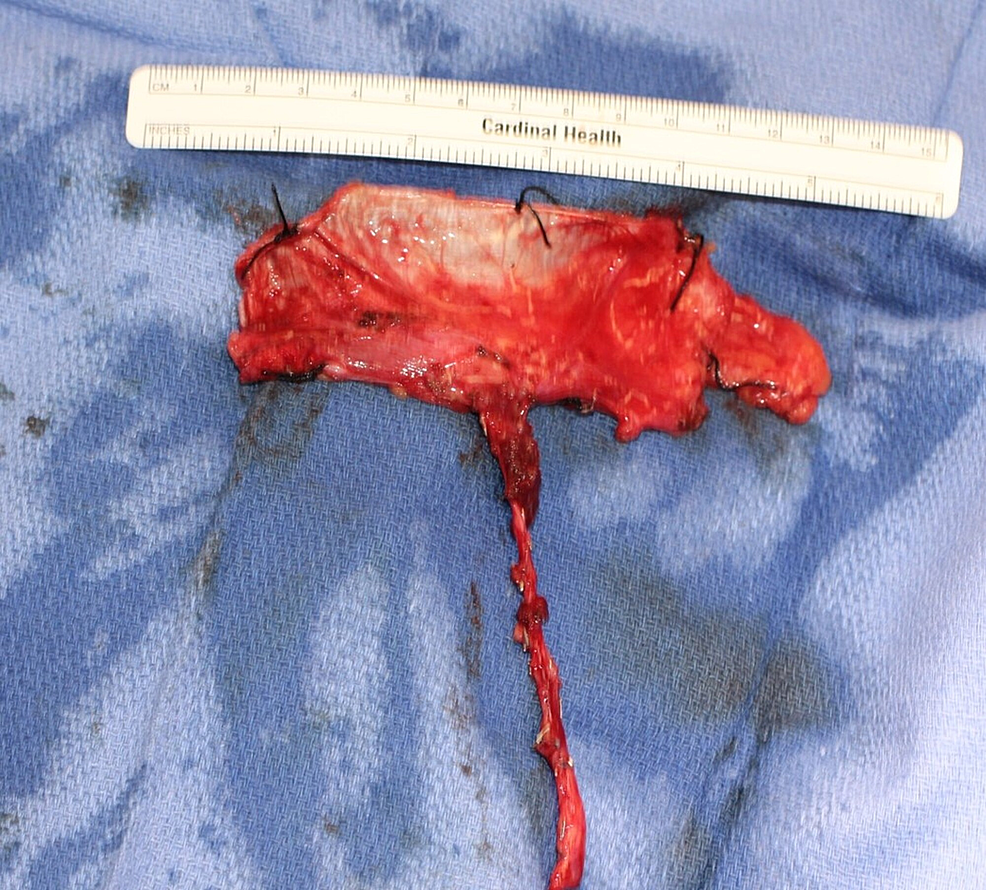 Vascular inset and access are performed in a minimally invasive fashion. As has been previously described, a small incision is made near the facial notch and the facial artery and vein are used for vascular inset. With sufficient pedicle length, the superficial temporal vessels can be used in a similar minimal access technique. The angular vessels, accessed via an incision within the nasolabial sulcus, are also excellent donor vessels that can be accessed with minimal morbidity [3-4].

In all cases, a two-team approach was employed. Recipient site preparation was performed with concurrent free flap harvest to limit operative time.

Patients are typically extubated immediately postoperatively and remain admitted to the hospital until they are ambulating, taking adequate oral intake, and their pain is well-controlled. Typically, patients are started on a liquid diet in the immediate perioperative period and are advanced quickly to full liquid and soft diet within the first 1-2 hospital days.

The average patient age was 47 years (range 30 to 69 years of age) and 50% were male (7 of 14). Follow-up time ranged from three months to sixty months at the time of review, with an average follow up time of 24 months. Five patients had a history of radiation therapy to the region, prior to undergoing free flap repair.

At the time of the most recent follow-up, no patients suffered from velopharyngeal insufficiency or nasal regurgitation of oral diet. Of note, no patients within this study underwent any form of speech or swallowing therapy post-operatively (Table 1: Patient Data).

Morbidity was low in this case series, with no major surgical complications in the early postoperative period. One patient suffered donor site morbidity requiring intervention. This patient developed a seroma 2-3 weeks post-operatively, which was needle aspirated at the second post-operative visit at three weeks.

To date, there have been a large number of studies discussing the various free flap and prosthetic approaches to repairing maxillectomy and palate defects. In addition, there have been multiple reports of the usage of fascia lata for head and neck reconstruction [5-6]. However, there has been little to no literature describing the use of isolated vascularized fascia lata free flap for reconstruction of minor maxillectomy and palatal defects.

In our series, we demonstrate the efficacy and low morbidity of the fascia lata free flap for reconstruction of primarily smaller or more limited palatal defects. Our patients all had limited defects, which would often be considered for prosthesis rehabilitation or possibly radial forearm free flap [2, 7]. However, the radial forearm free flap has a number of drawbacks, namely, increased donor site morbidity, hair-bearing tissue in a site not often irradiated postoperatively, and limited flap size. The use of thin vascularized fascia lata allows for repair of palatal defects with limited soft tissue bulk (Figure 2). 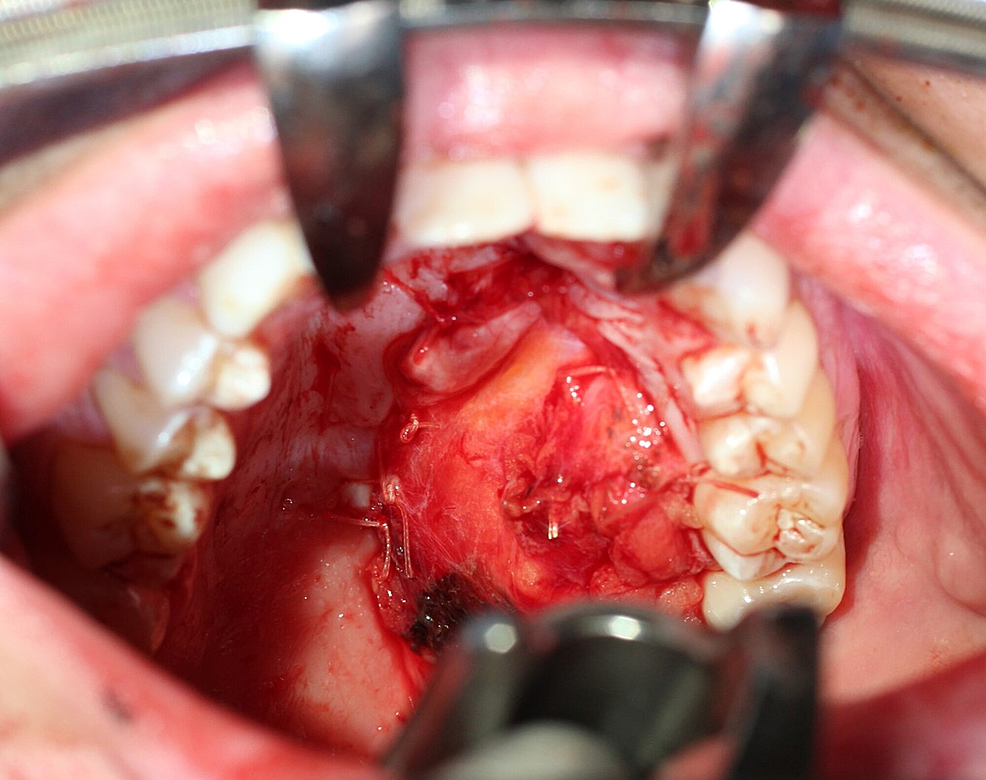 Furthermore, within the oral cavity, the exposed fascia lata granulates and mucosalizes quickly. This obviates the need for cutaneous flaps or skin grafting (Figures 3-4). 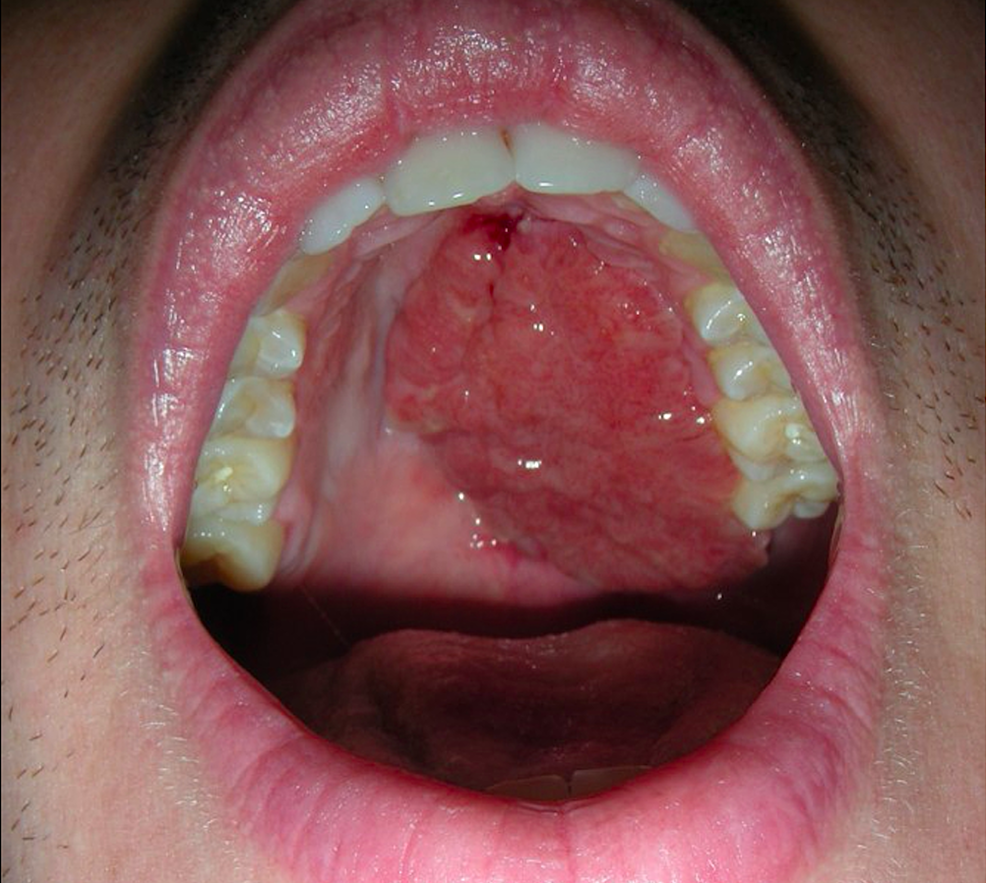 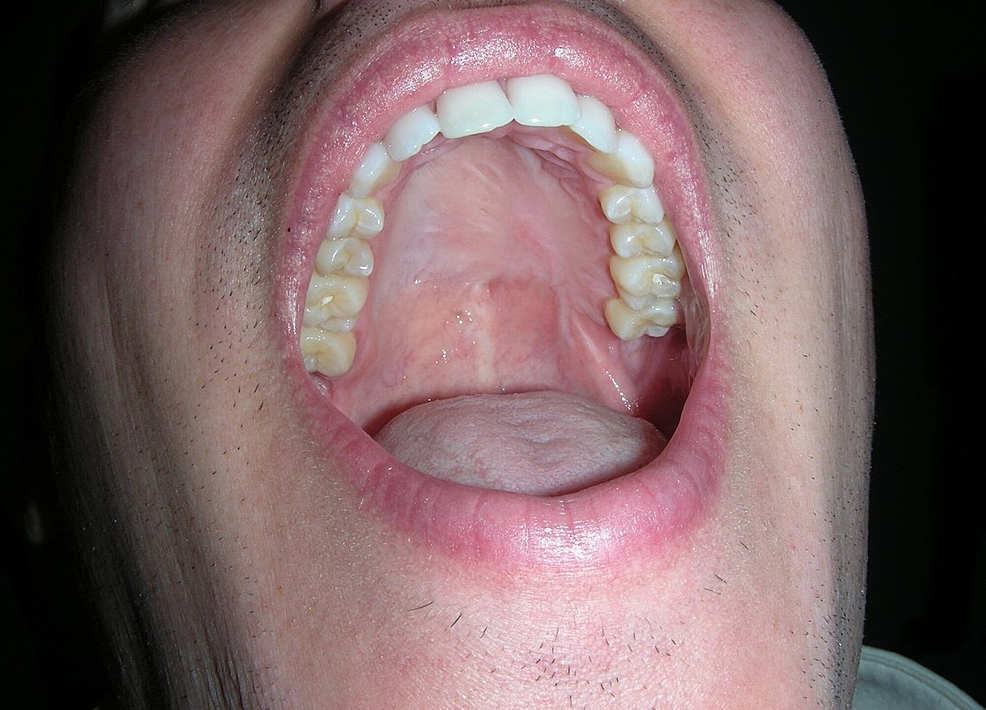 Notably, fascia lata tends to contract during healing and so should not be used to primarily repair large soft palate defects. In our experience, a fasciocutaneous ALT free flap is able to adequately repair a complex hard and soft palate defect.

Much of the literature available advocates for prosthetic rehabilitation for smaller defects while reserving free flaps for larger maxillectomy reconstruction. However, prosthetic usage comes with a number of drawbacks; namely, the need for a skilled prosthodontist, frequent cleaning and care, discomfort, and variable results [1-2, 8]. Furthermore, this method still renders the patient dysfunctional when the obturator is not in position, a concern for patients at night, and also as they age and lose both mental faculty and manual dexterity.

Brandão et al. recently published a systematic review comparing the quality of life outcomes between patients with maxillectomy defects repaired with free tissue transfer and those with defects managed with obturator prosthesis. Based on their review of ten studies, they concluded that the limited data available indicates relatively equal quality of life scores between the two groups [9]. Despite this, there remains a lack of evidence and consensus amongst surgeons regarding the best method of reconstruction. Effective obturator use depends on available residual dentition, a defect of less than half the hard palate and alveolus, a skilled prosthodontist and patient cooperation [2-3].

Obturator function and challenges reported by patients has varied throughout the literature; however, with an appropriately fitting prosthesis patients have generally reported good speech results with little difficulty [1, 10]. Despite this, based on results from Irish et al., up to 20-30% of patients still reported significant difficulties with speech [11]. Within our group of patients, there were no long-term functional deficits in speech or swallowing, highlighting the long-term excellent functional outcomes of this procedure.

Two of our patients required minor revision surgery. Both of these patients initially underwent fascia lata reconstruction for persistent palatal fistula after having failed local reconstructive attempts multiple times. One patient had previously received radiation to the maxilla. Both revision surgeries were for minor recurrent fistulas which were addressed with local tissue rearrangement that did not require hospitalization. Both of these patients have done well with excellent functional outcomes now one and two years out from revision surgery, respectively.

One argument for the use of obturators for reconstruction is the short recovery time. The fascia lata free flap technique requires a relatively short recovery time, as demonstrated by short hospital stays and a quick return to an oral diet. With an average hospital stay of 2.8 days and 85% of our patients starting a significantly oral diet on post-operative day one, this flap technique is unique in its minimal donor site morbidity and rapid return to function.

All of the patients in this series underwent minimal access incisions for microvascular anastomosis. The minimal access incisions for facial vessels, angular vessels, and superficial temporal vessels represent excellent options for both decreasing operative time and obtaining excellent long-term cosmesis. Various studies have demonstrated comparable and favorable flap survival when this approach is employed [7-8].

The limitations of this study are the small sample size, lack of objective quality of life and functional assessments, as well as those inherent to retrospective chart reviews. Application of standardized objective measurements for velopharyngeal insufficiency, dysphagia, and quality of life for all future patients undergoing this procedure and larger numbers will increase the applicability of this data. However, the purpose of this study is to present this novel technique and discuss its functional success. Further studies are needed to objectively compare this method to the obturator and other free flap reconstructive techniques.

© Copyright 2018
Kerr et al. This is an open access article distributed under the terms of the Creative Commons Attribution License CC-BY 3.0., which permits unrestricted use, distribution, and reproduction in any medium, provided the original author and source are credited.

Deep Neck Space Infections: A Retrospective Study of 183 Cases at a Tertiary ...

Cautionary High-resolution Computed Tomography Findings for the Presence of ...

Development of Bilateral Heterotopic Ossification After Survival of Life Thr ...