A 16-year-old girl with underlying congenital pulmonary atresia and an intact ventricular septum was referred for ophthalmology assessment at day six after a left pulmonary artery stenting procedure. The patient complained of a sudden onset of painless, blurred vision in the right eye after regaining consciousness from the procedure. She had undergone four heart surgeries that included a Blalock-Taussig shunt at two months of age, a bi-directional Glenn shunt at the age of two years, a Fontan procedure at eight years old, and a left pulmonary artery stenting six days prior to consultation.

Her presenting visual acuity was 20/160 OD and 20/20 OS. There was a marked afferent pupillary defect in the right eye. The intraocular pressures were normal in both eyes. Dilated funduscopic examination showed generalized edematous pale retina with evidence of a sparing papillomacular bundle in the right eye (Figure 1). No obvious embolus was noted. The left eye fundus examination was unremarkable.

The patient was immediately referred to the cardiologist for reassessment. Systemic examination was essentially normal. An urgent echocardiogram revealed an atrial septal defect with no intracardiac thrombus. The color doppler imaging showed blood flow from the right to left atrium via atrial septal defect (Figure 3). 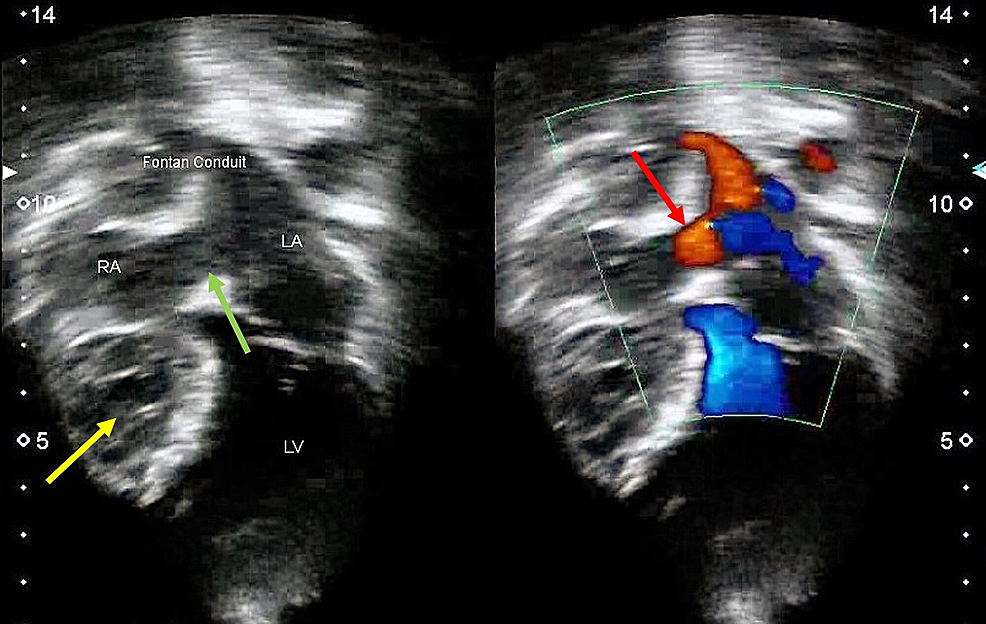 Patient’s previous dosage of oral warfarin was readjusted with the aim of maintaining the international normalized ratio (INR) at 2.5. The patient was reviewed at three months after the incident. The visual acuity showed improvement, with 20/50 OD and 20/20 OS. There was no rubeosis iridis, and intraocular pressure was normal. Optical coherence tomography showed atrophic changes of inner retina layer at the temporal aspect with a preserved papillomacular bundle in the right eye and normal thickness in the left eye (Figure 4).

Figure 4: Cross-sectional optical coherence tomography of the right eye showed retinal atrophy of the temporal part of the macula. Normal macula in the left eye

She was under close monitoring of her systemic condition and blood INR profile. The latest INR was 2.6. There was no recurrence of central retinal artery occlusion in the affected eye or in the fellow eye, which was also closely observed. No signs of cerebral vascular events were noted during follow-up visits.

The goal of the Fontan procedure is to divert the systemic venous return directly to the pulmonary arteries. Thus, it reduces volume overload of the single ventricle and increases systemic oxygenation. Despite the advantages, this procedure carries risk of right atrial dilatation, which can lead to additional problems, such as increased thrombus formation, arrhythmias, and pulmonary vein compression. It has been reported that venous thromboembolism occurs in between 3–16% of patients, and stroke or arterial thrombi occurs in 3–19% of patients after Fontan procedures [3].

The left pulmonary artery stent procedure is designed to improve the diameter of the left pulmonary artery. This is designed to improve the caliber and flow of blood to the left pulmonary artery, enhancing the blood flow of Fontan circulation to the lungs [4]. We postulated that the procedure may cause mobilization of micro-thrombi into the superior vena cava and right atrium. Subsequently, the thrombi likely gained access to the left atrium and hence the systemic and retinal circulation via the atrial septal defect. This explains the clinical manifestation of central retinal artery occlusion in our patient. There was no sign of cerebral thrombosis in our patient during close follow-up visits.

Duration of time from the onset of visual impairment is critical in the management of central retinal artery occlusion. This is because neuronal death and retinal infarction evolve progressively in a time-dependent fashion determined by both the duration and severity of the ischemic insult [5]. Ocular massage, carbogen therapy, and anterior chamber paracentesis performed more than 24 hours after an attack of central retinal artery occlusion do not facilitate visual improvement [6-7]. This explains why our patient did not receive any active management from the ophthalmology team because the onset of retinal ischemia had exceeded the 24 hours period.

Management of central retinal artery is also aimed at preventing subsequent vascular events, including stroke, myocardial infarction, and cardiovascular death [8]. Walker and Gatzoulis (2005) reported that thrombi are detected most commonly in the first year after a Fontan surgery, with a plateau after 3.5 years, and followed by a second peak after 10 years. The late peak in risk would be of particular concern in the case of long-term survivors following Fontan surgery [9]. Therefore, anticoagulant treatment and cautious INR monitoring are crucial.

© Copyright 2018
Oo et al. This is an open access article distributed under the terms of the Creative Commons Attribution License CC-BY 3.0., which permits unrestricted use, distribution, and reproduction in any medium, provided the original author and source are credited.

Figure 4: Cross-sectional optical coherence tomography of the right eye showed retinal atrophy of the temporal part of the macula. Normal macula in the left eye