Influenza is a common virus that affects millions of people every year. The influenza vaccine decreases morbidity and mortality associated with influenza and is generally well tolerated. Stevens-Johnson syndrome (SJS) is a rare disorder of the skin and mucous membranes. We report the second known case of SJS occurring after an influenza vaccination alone without any other associated drug exposure. This corroborates the possibility of the influenza vaccine alone causing SJS. Despite the initial adverse reaction, the patient made a full recovery. Although the disease can be associated with vaccinations, the benefits of receiving the vaccinations outweigh the potential harms.

Stevens-Johnson syndrome (SJS) is a rare disorder of the skin and mucous membranes that occurs in about one to three cases every million persons each year [1]. This serious disorder is characterized by flu-like symptoms, red or irritated skin, and blisters. Although cases related to vaccinations have been reported, there has been only one case reported due to the influenza vaccine only in a 24-year-old female [1]. There has been a second case reporting SJS occurring after receiving the influenza vaccine, but this was given in combination with fluvoxacillin, so it does not corroborate the first case [2]. We report the second known case of SJS occurring after an influenza vaccination alone, which corroborates the possibility of the influenza vaccination alone causing SJS.

The patient was an 82-year-old male with a past medical history of successfully treated prostate cancer and hypertension. His medications included atorvastatin, candesartan, metoprolol, and aspirin taken with no dose changes for at least two years. He received the influenza vaccine Influvac® (Abbott), which he had done annually without any complications. The patient had no symptoms on the day of the injection. One day after the vaccination, he noted mild pruritus in the evening. A rash was noted in the chest and back, and he was started diphenhydramine 25 mg orally as well as diphenhydramine cream. Four days after the vaccination, the rash had spread to his arms and legs (Figures 1, 2). Five days after the vaccination, the rash spread to the face, and he went to a walk-in clinic. Upon examination, his dose of diphenhydramine was increased to 50 mg. That afternoon, the patient’s wife noticed facial swelling and brought him into the emergency room of a major city hospital. The doctor noted an inner lip ulcer and diagnosed it as mild Stevens-Johnson syndrome based on the morbilliform rash on his body that had spread to the patient’s face. He was admitted to the hospital for two nights. A dermatologist verified the diagnosis of SJS and prescribed cetirizine (10mg daily for seven days). The patient had an estimated 85% body surface area affected with a SCORe of Toxic Epidermal Necrosis (SCORTEN) score of 1 [1]. Oral steroids were suggested, but the patient declined to take them. One day after discharge (eight days after the influenza vaccination), he noted the appearance of more ulcers on his bottom lip (Figure 3). Nine days after the influenza vaccination, he saw another dermatologist who recommended an oral mouthwash for symptomatic relief. Gradually, the skin rash improved, but the oral ulcers worsened until about nine days after vaccination and improved by 13 days after vaccination. The patient felt he was mostly recovered about a month after the vaccine. Other than the flu vaccine, patient had not taken any new medications, new supplements, or new foods prior to the development of the itching and skin rash. 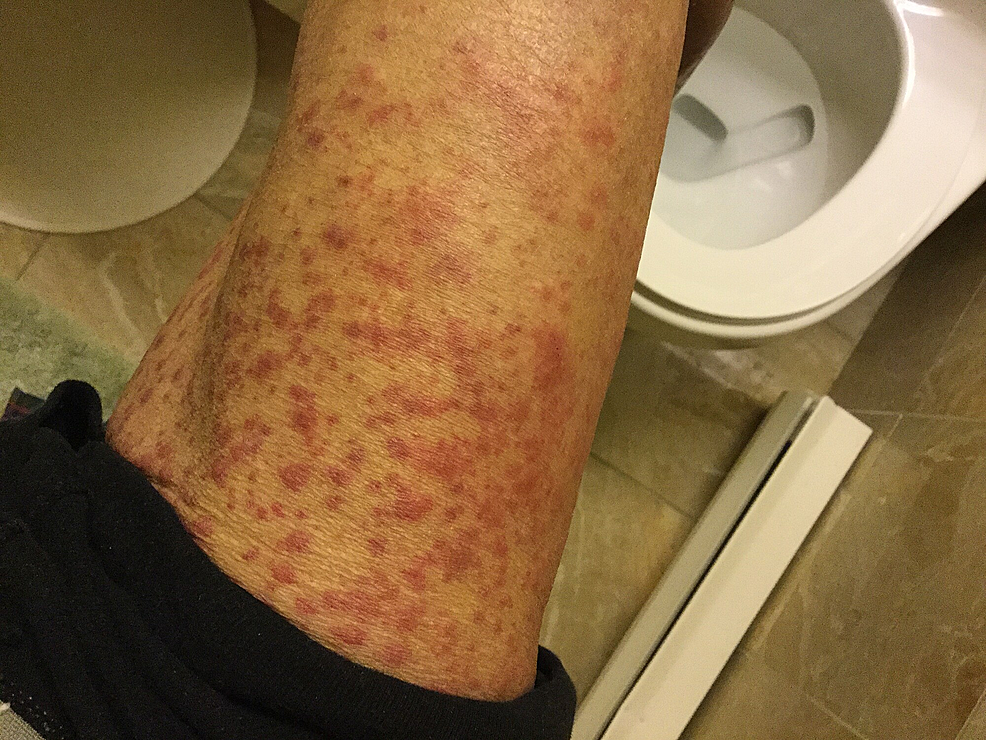 Multiple purpuric macules are present. There is a lack of serious skin detachment or blistering. 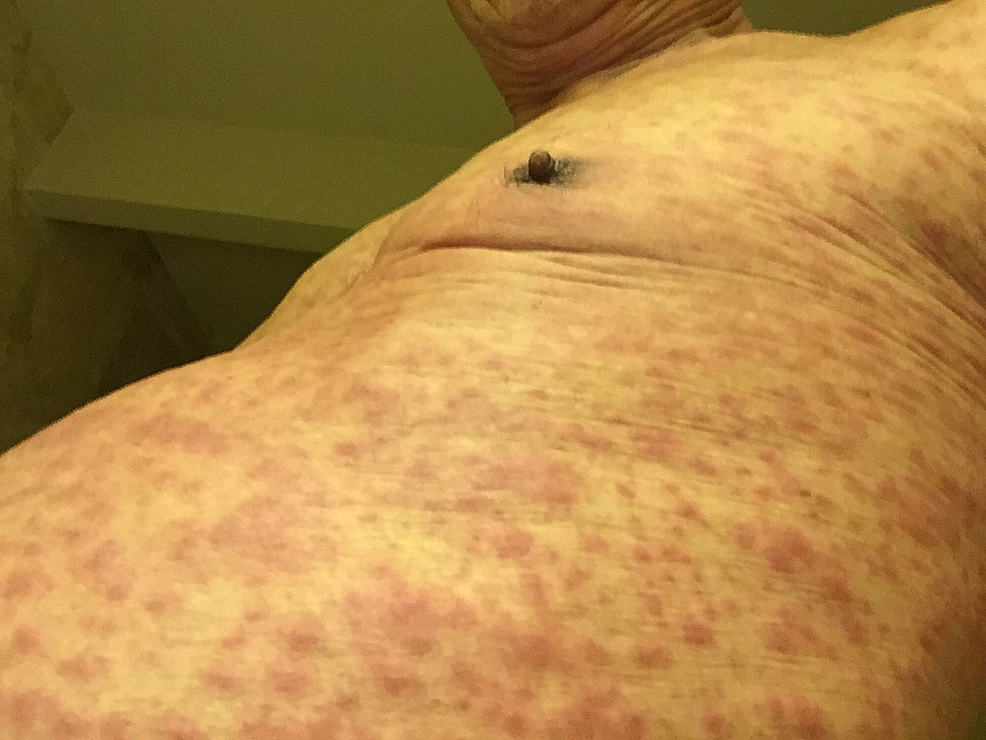 Diffuse presentation of coalescing macules across the trunk. Lack of serious skin detachment. 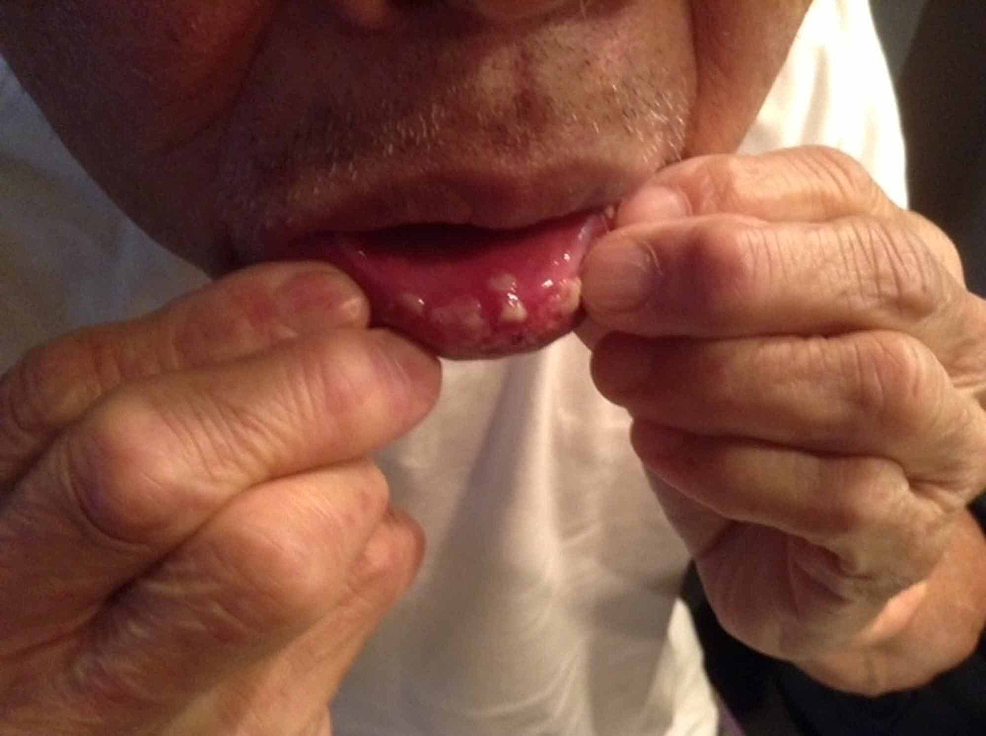 Even though SJS is rare with an annual incidence of one to three reported cases per million people [1], there have been many reported cases of SJS since its discovery in 1922 [3]. Over 200 different medications have been identified as causes of SJS, most commonly sulfonamide antibiotics, aromatic anticonvulsants, beta-lactam antibiotics, nevirapine, abacavir, non-steroidal anti-inflammatory medications, allopurinol, lamotrigine, tetracyclines, quinolones, and others [4]. These drugs impact various physiological factors that can lead to the development of SJS. Cytotoxic T cells and natural killer cells have been associated with SJS due to the release of granulysin which destroys cells in the skin and mucous membrane. The cell death that occurs in these areas is generally identified as apoptosis as a result of dysregulation in specific transmembrane protein pathways. The most extensively investigate pathway is that of Fas. This pathway involves the binding of a soluble ligand that induces a caspase cascade leading to the destruction of the cell. Typically SJS occurs in a younger population and is a response to multiple drugs [4].

Mycoplasma pneumonia has been documented in a few cases [5]. SJS has also been associated with Herpes simplex virus [6]. Fleming in 2011 reported a case where a 65-year-old female with a breast abscess was given oral flucloxacillin, then on day 10 of the treatment, she was given the inactivated influenza vaccine Fluvirin® (Novartis) [2]. About 24 hours later, she developed SJS. Because of the abscess infection as well as dual exposures to the antibiotic and the vaccine, the definitive cause could not be determined.

There are several main differential diagnoses for SJS. Acute generalized exanthematous pustulosis (AGEP) is characterized by pinhead-sized pustules that were not present in this case. AGEP is more commonly seen in middle-aged adults and only involves mucosal membranes in roughly 20%-25% of cases [7]. Erythema multiforme is another disease that presents similarly to SJS with skin lesions. These lesions, however, are most commonly associated with the herpes simplex virus and usually do not involve mucosal membranes [4]. In addition to this, the lesions are typically localized or raised atypical targets [8]. Toxic epidermal necrolysis (TEN) presents similarly to SJS, usually beginning with fever-like symptoms followed by cutaneous and mucous membrane lesions. However, the definition of each differs in the extent of skin detachment. SJS encompasses <10% of skin involvement while TEN encompasses >30% of the skin [8]. This patient has <10% skin detachment which is consistent with SJS.

SJS is very rarely associated with vaccination exposure only. A study of the Vaccine Adverse Event Reporting System noted over a nine-year period, there were 96,951 distinct adverse event reports noted of which six cases were either SJS or TEN following exposure to vaccination only [1]. Chopra reported SJS in a 19-year-old male military reservist who received immunizations to smallpox, anthrax, and tetanus then developed SJS twenty days after the vaccinations [9]. SJS was reported following two cases of measles vaccination [10]. To our knowledge, SJS has been previously reported in one case following exposure to only the inactivated seasonal influenza vaccine. Our case thus corroborates the possibility of SJS occurring secondary to the influenza vaccine only.

Influenza is a common virus that affects millions of people every year. From 1976 to 2007, estimated flu-related deaths in the United States since 2010 have ranged from 12,000 to 56,000 [11]. The vaccine decreases morbidity and mortality associated with influenza. During the 2011-2012 flu season, influenza vaccination was associated with a 71% reduction in flu-related hospitalizations among adults of all ages and a 77% reduction among adults 50 years of age and older [12]. Since this case illustrates a very rare complication of the influenza vaccine, the benefits of the influenza vaccine clearly far outweigh its potential harm. Therefore this case should not deter people from receiving the influenza vaccination.

Human subjects: Consent was obtained by all participants in this study. Conflicts of interest: In compliance with the ICMJE uniform disclosure form, all authors declare the following: Payment/services info: All authors have declared that no financial support was received from any organization for the submitted work. Financial relationships: All authors have declared that they have no financial relationships at present or within the previous three years with any organizations that might have an interest in the submitted work. Other relationships: Subject is the grandfather of the primary author.

© Copyright 2020
Tong et al. This is an open access article distributed under the terms of the Creative Commons Attribution License CC-BY 4.0., which permits unrestricted use, distribution, and reproduction in any medium, provided the original author and source are credited.

Multiple purpuric macules are present. There is a lack of serious skin detachment or blistering.

Diffuse presentation of coalescing macules across the trunk. Lack of serious skin detachment.