Partial anomalous pulmonary venous return (PAPVR) is a rare congenital malformation. The infracardiac variant with the right lobe of the lung draining to the inferior vena cava (IVC) is called Scimitar syndrome. The infantile subtype presents before one year of age and the adult variant is also usually diagnosed in childhood.

A 70-year-old woman presented with worsening shortness of breath. An echocardiogram suggested severe pulmonary hypertension that was confirmed by right heart catheterization. A computed tomography (CT) without contrast revealed an anomalous vein from the right upper lobe suggestive of Scimitar syndrome. The patient did not have any other associated congenital heart defects (CHD) (incomplete Scimitar syndrome). A surgical treatment approach was avoided due to the incomplete nature of the Scimitar syndrome.

Infracardiac partial anomalous pulmonary venous return (PAPVR) is a rare congenital venous anomaly (one in a million live births) in which the right pulmonary veins drain to the inferior vena cava (IVC) [1]. This anomalous vein appears similar to a Turkish curved sword (the eponymous Scimitar) on a chest x-ray. The infantile variant presents before one year of age. The adult variant presents later and a median age of presentation has not been reported. Diagnosis of this anomaly and determining the management strategy can be challenging especially in patients who present at an older age.

A 71-year-old lady had originally presented in 2015 with chest pain radiating to the back. An echocardiogram performed at that admission had noted elevated right ventricular systolic pressure and she had been advised to follow up for further evaluation. She presented in 2017 with dyspnea on exertion for two weeks. She did not have any chest pain, fever, diaphoresis, cough, wheezing, orthopnea, palpitations, syncope or presyncope.

Past medical history included hypertension, hyperlipidemia, diabetes mellitus and chronic kidney disease stage III. She did not have a history of recurrent respiratory infections.

She had worked in the car industry with some exposure to chemical fumes. The patient denied ever having smoked or used recreational drugs. Her home medications included pantoprazole, clopidogrel, simvastatin, levothyroxine, venlafaxine, and glyburide.

The patient’s blood pressure was elevated at 153/103. The other vital signs were within normal limits. She had a regular rhythm and pulse at a normal rate. Jugular venous distension was absent. No murmurs or bruits were heard but the patient had a loud P2 over the pulmonic area. Leg edema was absent. Auscultation of the lungs revealed coarse breath sounds over the right lower lobe but the rest of the lung fields were normal without any crackles or wheezes. 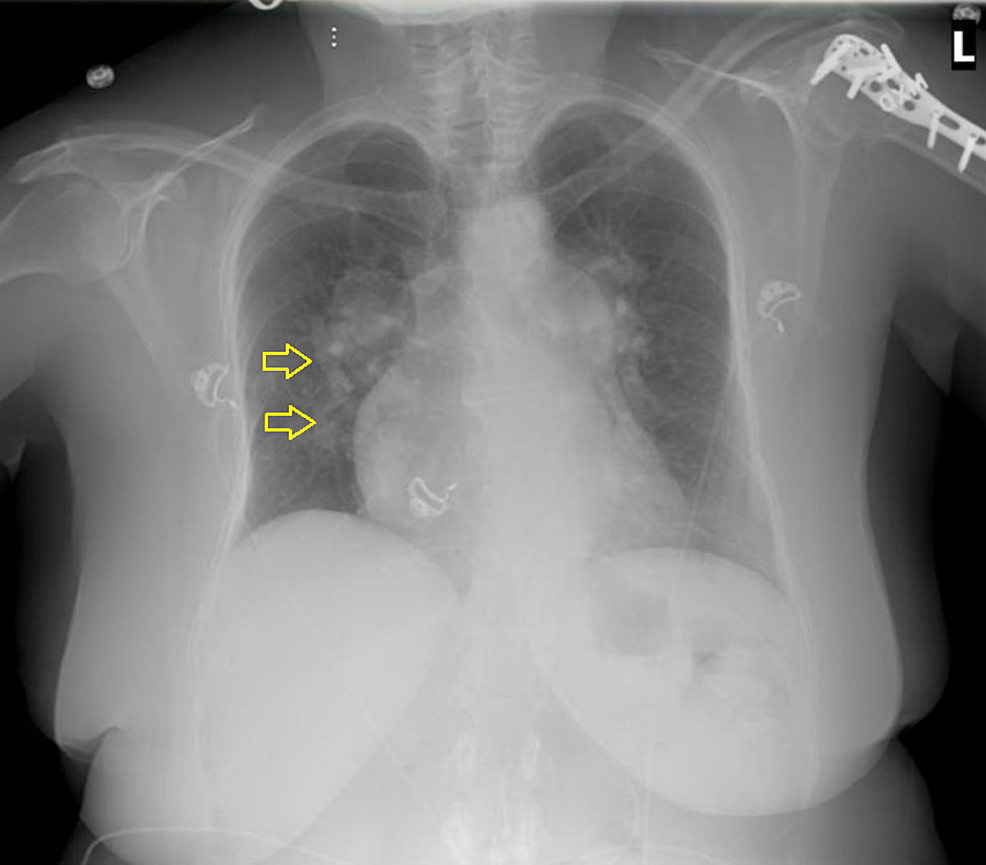 A computed tomography (CT) scan of her chest without contrast identified mosaic interstitial lung disease and the presence of an anomalous vessel in the right lower lobe which was draining into the IVC (Figures 2, 3). 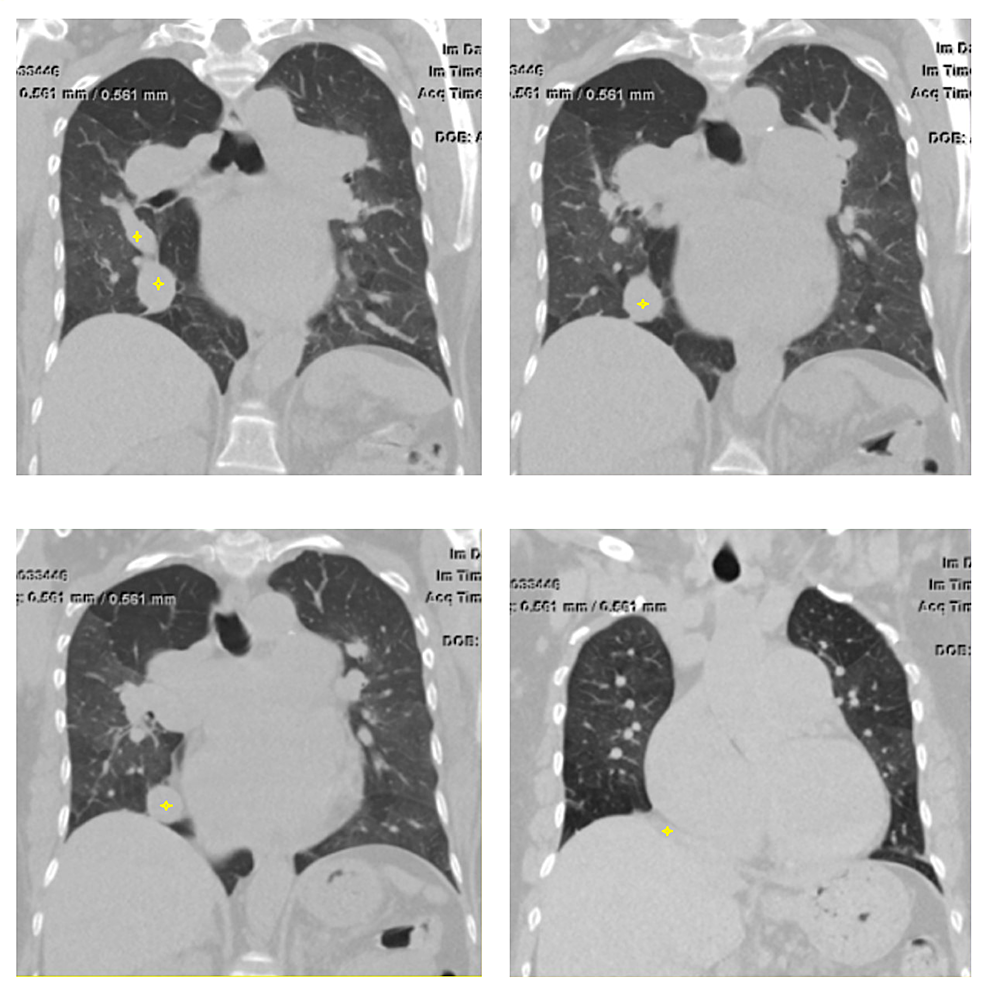 Right heart catheterization confirmed the diagnosis of severe pulmonary hypertension with right atrial pressure of 30 mmHg, right ventricular pressures of 112/20 mmHg, pulmonary artery pressures of 113/44 mmHg with a mean of 73. The pulmonary capillary wedge pressure was 28 mmHg with a transpulmonary gradient of 45 mmHg and pulmonary vascular resistance of 11.2 wood units. The ratio of pulmonary blood flow to systemic blood flow was 3.6 confirming the presence of left to right shunting. These results were consistent with mixed etiology of pulmonary hypertension with predominant pulmonary vascular disease [2].

Due to the absence of shunting, a small number of anomalous veins draining only a small part of the right lung, the absence of associated valvular abnormalities and the lack of any concomitant cardiac or pulmonary disease, medical management was chosen in our patient [3]. The patient was started on nifedipine and low dose aspirin. Later the patient developed paroxysmal atrial flutter. She was started on apixaban and her nifedipine was switched to diltiazem. The patient was referred to a pulmonary hypertension clinic at a tertiary center.

PAPVR is a rare congenital defect in which some of the pulmonary veins drain into the right side of the circulation. The right pulmonary veins are more often affected for unknown reasons [4]. There are four types of PAPVR that have been described as supracardiac, infracardiac, cardiac or mixed [5]. Infracardiac PAPVR involves most of the right lung draining into the inferior vena cava just above or below the right hemidiaphragm via the anomalous vein which appears as a Turkish curved sword on a chest X-ray (the eponymous Scimitar) [6]. This syndrome as originally described by Cooper in 1836 involved other coexisting cardiovascular and pulmonary malformations [7]. This is also called as the infantile variant of Scimitar syndrome as the patients present with significant symptoms during infancy. Presence of the Scimitar vein without any other malformation is called as incomplete Scimitar syndrome or adult variant of Scimitar syndrome with patients presenting after one year of age [8, 9].

Although patients with the incomplete Scimitar syndrome develop symptoms later due to small volume shunting of blood, it is rare to present in the seventies. Surgical repair is necessary in infantile Scimitar syndrome and is often undertaken in most patients presenting in childhood with incomplete Scimitar syndrome. A surgical strategy was not pursued in this case considering the low likelihood of benefit considering she had already developed severe pulmonary hypertension and did not have other factors that would indicate a potential for benefit from surgical repair (as mentioned in the Treatment section).

Incomplete Scimitar syndrome is a form of infracardiac anomalous pulmonary venous return with the right lung draining into the inferior vena cava without any other cardiovascular malformations. It is a rare congenital anomaly that may present in late adulthood with dyspnea on exertion due to development of pulmonary hypertension. Medical management of pulmonary hypertension is the mainstay of therapy. Surgical interventions may not be necessary due to the low volume of the blood being shunted.

© Copyright 2017
Saleh et al. This is an open access article distributed under the terms of the Creative Commons Attribution License CC-BY 3.0., which permits unrestricted use, distribution, and reproduction in any medium, provided the original author and source are credited.