The incidence of brain metastases range from 10 to 20% of all adult patients with cancer and lung cancer is associated with one of the highest incidences of brain metastases. In geriatric patients, who already have limited cognitive function, whole brain radiation therapy (WBRT) can be a problem. Stereotactic radiosurgery (SRS) is a one day, outpatient treatment with minimal effect to normal brain and could particularly be useful in elderly patients. We report the case of a geriatric patient with metastatic lung adenocarcinoma who had multiple brain metastases and recurrences, who responded well to the stereotactic radiosurgery (six sessions) with acceptable tumor control.

The brain metastases incidence is actually increasing as there has been an improvement in overall patient survival due to more effective systemic therapy [1-2]. Stereotactic radiosurgery (SRS) is a primary modality of treatment in patient with brain metastases and has demonstrated efficacy in several randomized trials and multicenter studies, whether performed alone or in combination with whole-brain radiation therapy (WBRT) [3-5]. SRS has been shown to be efficacious and safe for a fewer number of brain metastasis. We report an exceptional outcome in a geriatric patient with multiple brain metastases who underwent multiple courses of SRS. 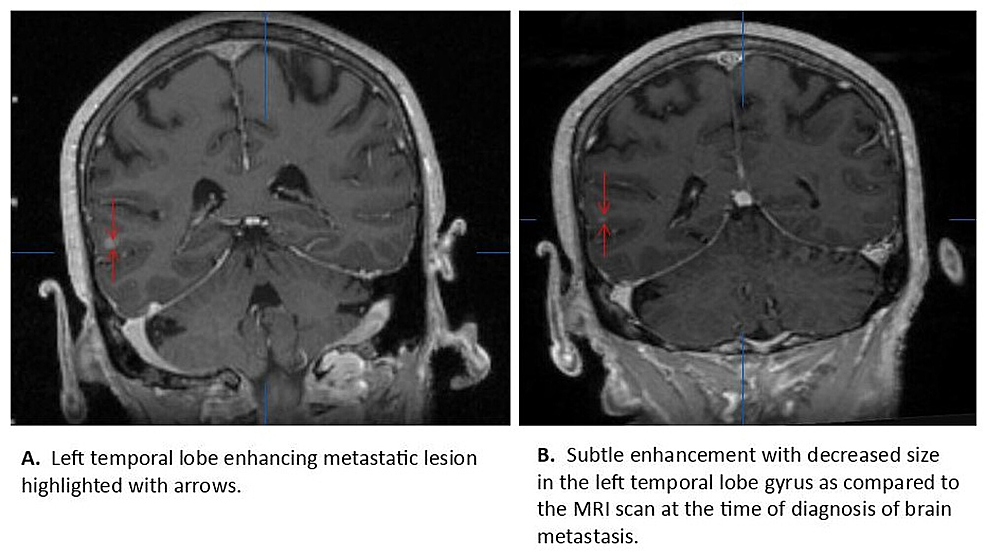 Figure 1: MRI scan of the brain from the brain lab, (A) at the time of the diagnosis or before SRS and (B) after SRS.

She received carboplatin, pemetrexed, and bevacizumab in October 2013 for systemic disease with excellent initial response. Follow-up MRI of the brain in August 2014 and repeat in October 2014 (Figure 2) demonstrated new multiple brain metastases in left frontal and parietal region for which she underwent SRS in October 2014. 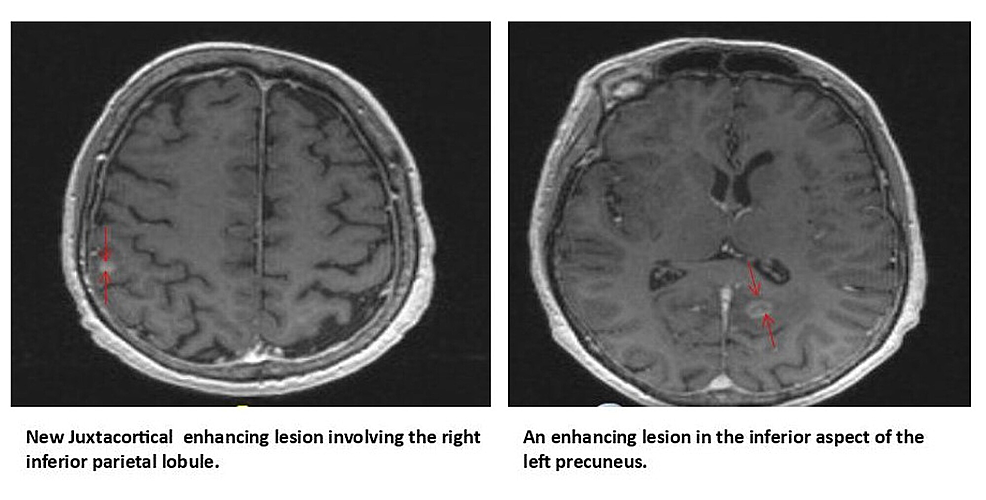 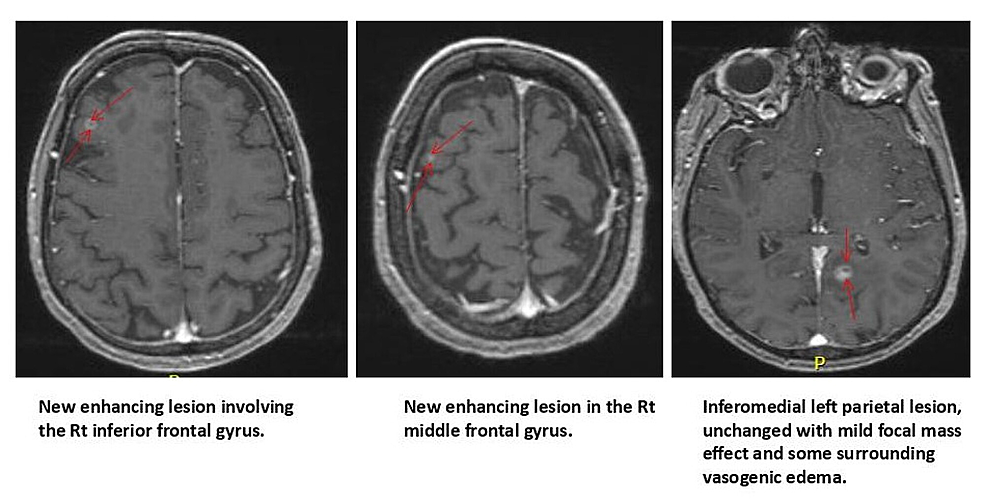 There was no neurological deficit since the diagnosis of the brain metastases and patient tolerated the SRS treatment fairly well with good quality of the life and with no impairment in neurocognitive function.

The patient has been doing well with stable systemic disease and good performance status with Eastern Cooperative Oncology Group (ECOG) performance score of 0.

Treatment for brain metastases is challenging and the outcome depends on various factors such as the age of the patient, performance status and the number of metastases, mass affect, tumor location and neurological deficit. Extracranial metastasis and systemic disease control have been a major determinant of the overall survival of the patient with brain metastasis.

Historically, WBRT has been the standard of care for patients with multiple brain metastases but it has also been associated with neuro-cognitive effect [6-7].

SRS has demonstrated efficacy in several randomized trials and multicenter studies, whether performed alone or in combination with WBRT. Recently, SRS has been emerged as the preferred modality of treatment for the patient with multiple brain metastases [8]. SRS has also progressively gained favor because of its minimal impact on the delivery of systemic treatment options and it may also have synergistic effect with novel immunotherapy agents.

Our patient had multiple recurrence of brain metastases since the diagnosis and underwent a total of six courses of SRS within a span of four years. Except for patient’s age (>75 years), she had fairly well controlled systemic disease, good performance status, and no neurological deficit. The patient’s multiple recurrence of the brain metastases has been well controlled with stereotactic radio-surgery with good clinical outcome. In total she received local intracranial treatment with stereotactic radiosurgery for 12 lesions with no neurological deficit.

The rates of local control have been equivalent between SRS and WBRT but SRS alone has been found to have higher rates of recurrence after treatment as compared to WBRT because SRS only treats the lesion visible on MRI while WBRT also treats microscopic level metastatic disease [9]. Furthermore, overall survival is similar between WBRT and SRS versus SRS alone in randomized studies [9]. Recent studies in patients with brain metastasis have also demonstrated tumor volume as the prognostic factor to predict the clinical outcome [10].

Stereotactic radiosurgery is a very effective modality of treatment for recurrent and multiple brain metastases depending on the prognostic factors of the patient. Minimal cognitive decline compared with WBRT makes SRS favorable for geriatric patients with limited cognitive capacity. However, more studies are necessary on multiple SRS courses in recurrent brain metastases to determine the neuro-cognitive effect and overall outcome of the patients.

© Copyright 2017
Thapa et al. This is an open access article distributed under the terms of the Creative Commons Attribution License CC-BY 3.0., which permits unrestricted use, distribution, and reproduction in any medium, provided the original author and source are credited.

Figure 1: MRI scan of the brain from the brain lab, (A) at the time of the diagnosis or before SRS and (B) after SRS.

Saudi Nurses’ Competency Learnings and Experiences from the Newly Developed ...

The Use of SpineJack Intravertebral Implant for the Correction of Recurrent ...