The heterogeneity associated with multiple brain metastases demands innovative treatment approaches and requires that each patient be treated on a case-by-case basis. In this report, we present three cases demonstrating exceptional outcomes after multimodality treatment with SRS and microsurgical resection. A common feature of each patient is the presence of multiple metastases in the region of the motor cortex. The rationale for this selection is to demonstrate that aggressive management can have a favorable outcome despite the presence of multiple metastases in eloquent regions of the brain. The evidence-based reasoning for the treatment of each patient is presented in the discussion. 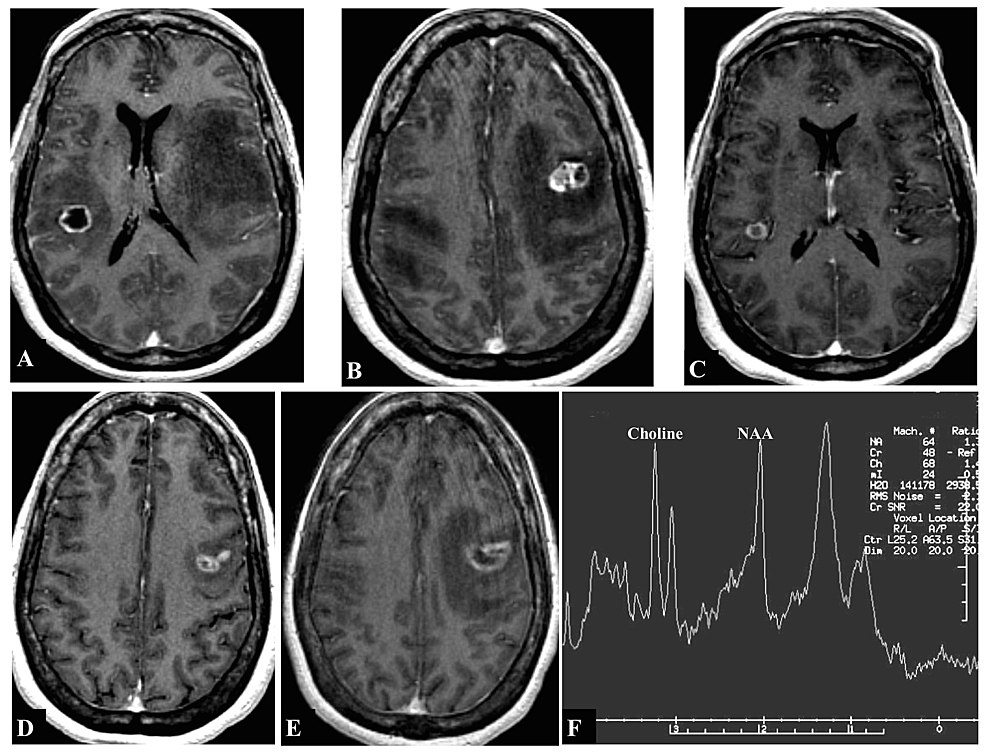 The patient is a 45-year-old female with a two-year history of breast cancer (infiltrating ductal carcinoma; estrogen and progesterone receptor positive). She presented with simple partial seizure of the left upper extremity followed by left hand weakness (3/5 strength). MRI of the brain with contrast demonstrated enhancing lesions in the right postcentral gyrus (2.35 cm diameter), with peritumoral edema extending to the central gyrus, and in the left anterior superior frontal gyrus (3.5 cm diameter) (Figure 2A). Lesions were also observed in the left lateral cerebellar hemisphere (less than 1 cm) and in the left precentral gyrus (less than 1 cm) (Figure 2B-2C). The patient underwent bilateral craniotomies under a single anesthesia setting for resection of the lesions in the right postcentral gyrus and left anterior superior frontal gyrus. The patient did not have any more seizures and she was full strength postoperatively. The postoperative MRI demonstrated complete resection of the tumor. On postoperative day 21, the patient underwent GK to both resection cavities (15Gy at the 50% isodose line to each lesion) to the left cerebellar lesion (24Gy at the 50% isodose line), and to the left precentral gyrus lesion (24Gy at the 50% isodose line). A follow-up MRI obtained 15 months after GK demonstrated excellent tumor control: no new lesions were identified, the surgically resected lesions were without recurrence, the left precentral gyrus lesion had completely resolved, and the left cerebellar lesion demonstrated signs of radiation necrosis. The patient has continued to survive four years after her diagnosis of breast cancer and 32 months after treatment of her brain tumors. She is currently on levetiracetam for seizure disorder and has complaints of headache managed by pain medications. Her most recent MRI shows no new brain lesions and a stable appearance of all treated lesions (Figure 2D). 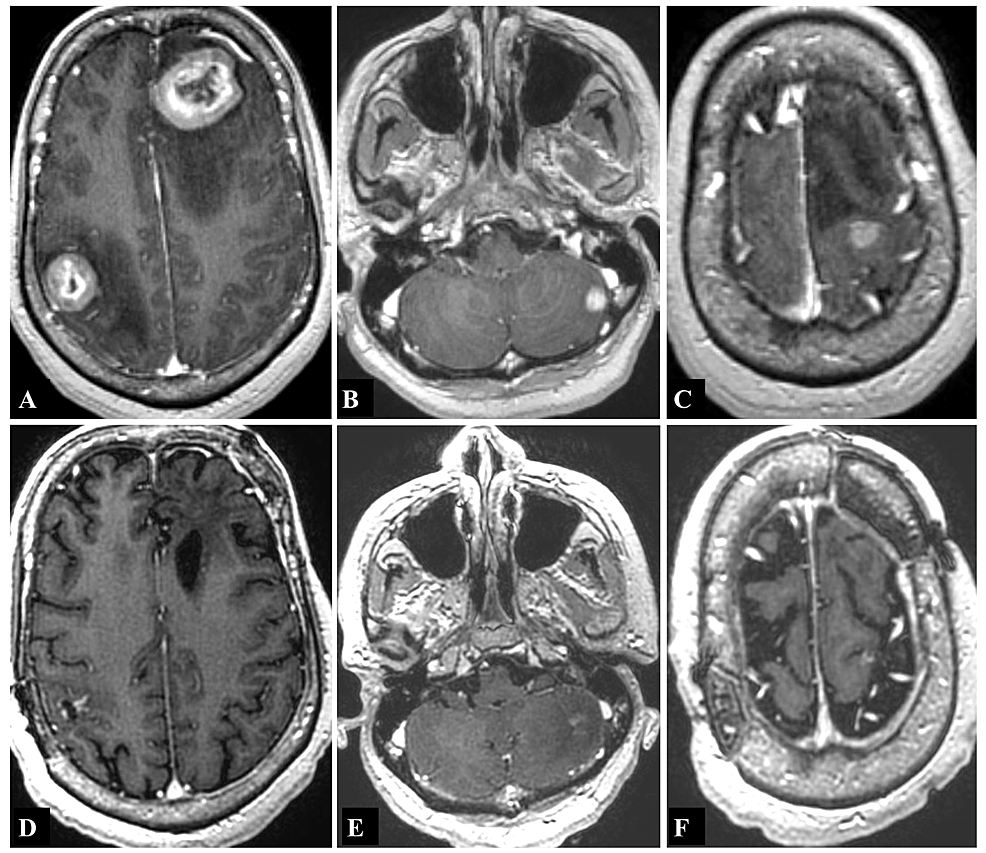 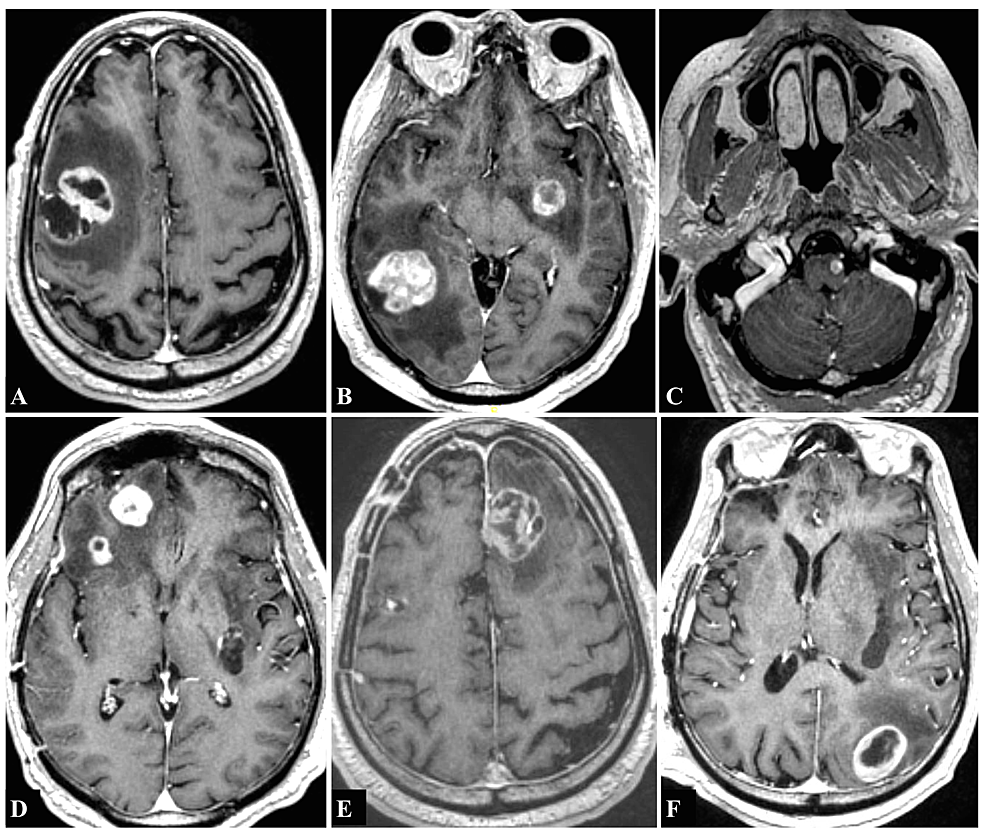 The cases are organized in increasing order of complexity to demonstrate the impact of an aggressive neurosurgical and radiosurgical approach in achieving excellent patient outcomes. The evidence-based rationale in treating each patient is discussed as follows:

The first patient had two brain metastases smaller than 3 cm, one in each cerebral hemisphere, and each located in the region of the motor cortex. The patient received Gamma Knife (GK) alone for treatment of her metastases. Multiple studies have demonstrated favorable results in patients with 1-4 metastases treated with stereotactic radiosurgery (SRS) with or without whole brain radiation therapy (WBRT). In order to evaluate the utility of SRS and WBRT in patients with multiple brain metastases, Kondziolka, et al. randomized patients with 2-4 brain metastases to receive WBRT alone or WBRT + SRS [1]. The study was stopped early at 60% accrual because of superior results in the WBRT + SRS group. The median survival time (MST) was higher in the WBRT + SRS group (11 months vs 7.5 months), although the difference was not statistically significant (p=0.22). However, the rate of local failure, defined as tumor progression or increase in clinical symptoms, at one year among surviving patients was 100% in the WBRT group versus 8% in the WBRT + SRS group. This study showed that patients with multiple metastases treated with WBRT + SRS alone had a lower rate of local failure with a possible survival benefit.

Luther, et al. performed a retrospective study to define the role of SRS alone for brain metastasis in or around the motor strip [7]. 94 patients with 96 tumors (2 patients had bilateral lesions) with metastases > 1.5 cm in the region of the motor cortex were treated with GK SRS alone. Motor function improved in 30 cases (31%), remained stable in 48 (50%), and worsened in 18 (19%). The median tumor volume in patients who improved or remained stable was 5.3 cm3, and the median tumor volume in patients who worsened was 9.2 cm3. This study demonstrated that SRS alone for brain metastasis around the motor strip is safe as long as the tumor volume is around 5 cm3. For larger tumors, the authors recommended microsurgical resection followed by SRS to the postoperative cavity. The excellent outcome following management of the first patient’s lesions around the motor cortex validates the findings of the Luther, et al. study.

The third patient in this series is the most complex. He received microsurgical resection followed by GK, which was repeated when new tumors were identified distant to the sites of initial metastasis.

The role of surgical resection of multiple brain metastases is documented by retrospective studies. Bindal, et al. performed a retrospective review of 56 patients who underwent resection of multiple brain metastases [5]. The patients were divided into three groups: Group A (30 patients) had multiple metastases with one or more lesions left unresected, Group B (26 patients) had multiple metastases with resection of all lesions, and Group C (26 patients) had surgical resection of single metastasis. MST was six months for Group A, 14 months for Group B, and 14 months for Group C. There was a statistically significant difference in survival between Groups A and B, and Groups A and C, but not between Groups B and C. The recurrence rate was 31% in Group B and 35% in Group C. In Group B, a total of 44 craniotomies were performed to resect 55 lesions. The authors presented one of the first series demonstrating equivalent outcomes following surgical resection of single versus multiple metastases regardless of the number of craniotomies as long as all the lesions are resected completely.

© Copyright 2017
Dossani et al. This is an open access article distributed under the terms of the Creative Commons Attribution License CC-BY 3.0., which permits unrestricted use, distribution, and reproduction in any medium, provided the original author and source are credited.