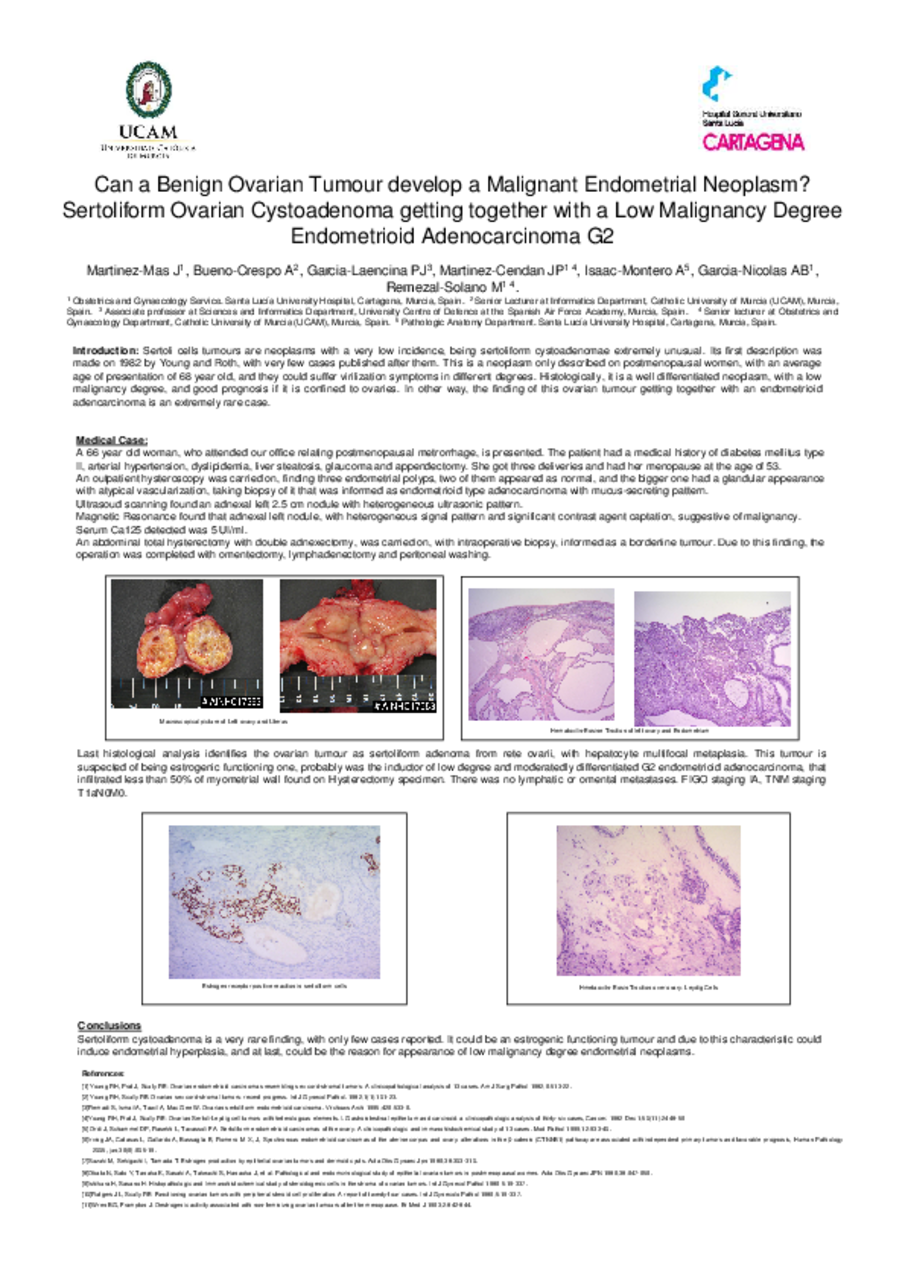 Can a Benign Ovarian Tumour develop a Malignant Endometrial Neoplasm? Sertoliform Ovarian Cystoadenoma getting together with a Low Malignancy Degree Endometrioid Adenocarcinoma G2

Sertoli cells tumours are neoplasms with a very low incidence, being sertoliform cystoadenomae extremely unusual. Its first description was made on 1982 by Young and Roth, with very few cases published after them. This is a neoplasm only described on postmenopausal women, with an average age of presentation of 68 year old, and they could suffer virilization symptoms in different degrees. Histologically, it is a well differentiated neoplasm, with a low malignancy degree, and good prognosis if it is confined to ovaries. In other way, the finding of this ovarian tumour getting together with an endometrioid adencarcinoma is an extremely rare case.

A 66 year old woman, who attended our office relating postmenopausal metrorrhage, is presented. The patient had a medical history of diabetes mellitus type II, arterial hypertension, dyslipidemia, liver steatosis, glaucoma and appendectomy. She got three deliveries and had her menopause at the age of 53.

An outpatient hysteroscopy was carried on, finding three endometrial polyps, two of them appeared as normal, and the bigger one had a glandular appearance with atypical vascularization, taking biopsy of it that was informed as endometrioid type adenocarcinoma with mucus-secreting pattern.

An abdominal total hysterectomy with double adnexectomy, was carried on, with intraoperative biopsy, informed as a borderline tumour. Due to this finding, the operation was completed with omentectomy, lymphadenectomy and peritoneal washing.

Last histological analysis identifies the ovarian tumour as sertoliform adenoma from rete ovarii, with hepatocyte multifocal metaplasia. This tumour is suspected of being estrogenic functioning one, probably was the inductor of low degree and moderatedly differentiated G2 endometrioid adenocarcinoma, that infiltrated less than 50% of myometrial wall found on Hysterectomy specimen. There was no lymphatic or omental metastases. FIGO staging IA, TNM staging T1aN0M0.

Sertoliform cystoadenoma is a very rare finding, with only few cases reported. It could be an estrogenic functioning tumour and due to this characteristic could induce endometrial hyperplasia, and at last, could be the reason for appearance of low malignancy degree endometrial neoplasms.

Gone but Not Forgotten: Ovarian Metastasis From a Colon Carcinoma in a 19-Ye ...

Surgery of Benign Ovarian Masses by a Gynecological Cancer Surgeon: A Cohort ...

Maternal and Fetal Outcome of Pregnant Patients Having Preexisting Cardiovas ...

Can a Benign Ovarian Tumour develop a Malignant Endometrial Neoplasm? Sertoliform Ovarian Cystoadenoma getting together with a Low Malignancy Degree Endometrioid Adenocarcinoma G2

© Copyright 2015
Martinez-Mas et al. This is an open access poster distributed under the terms of the Creative Commons Attribution License CC-BY 3.0., which permits unrestricted use, distribution, and reproduction in any medium, provided the original author and source are credited. 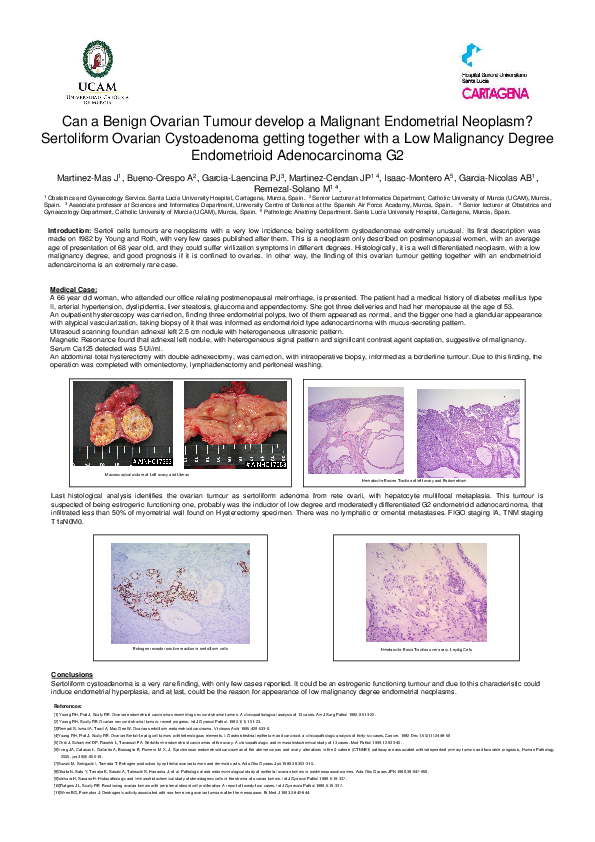