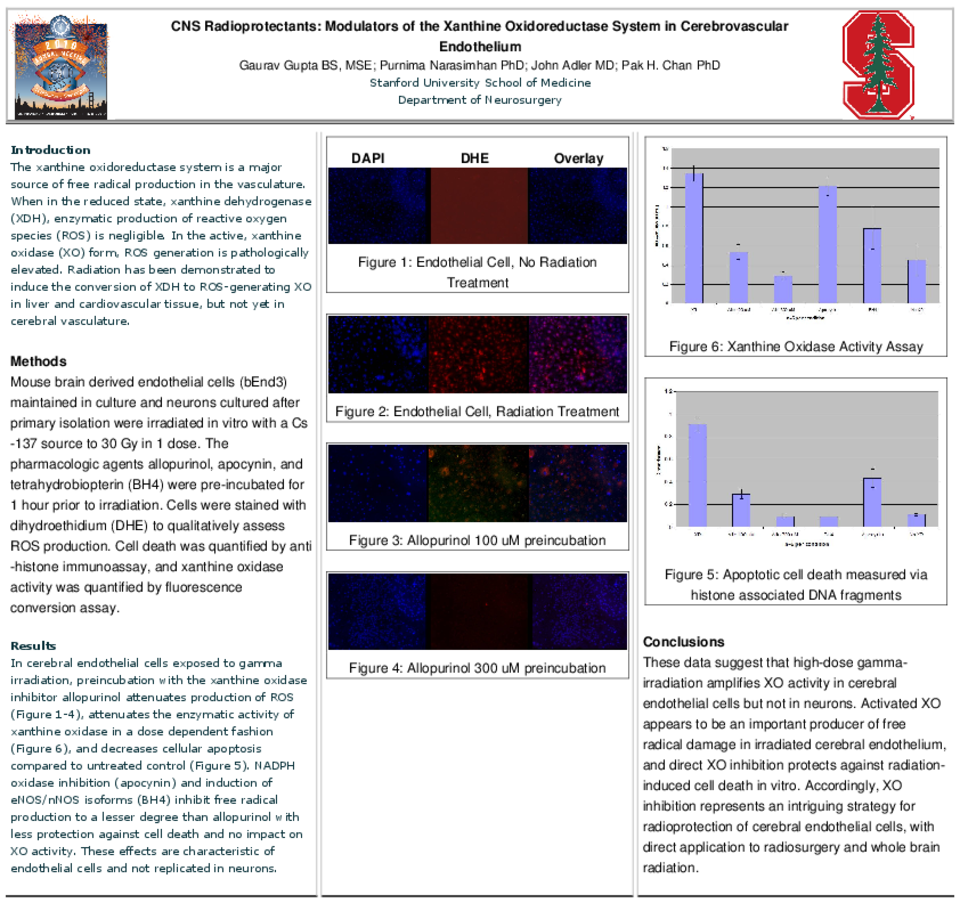 CNS Radioprotectants: Modulators of the Xanthine Oxidoreductase System in CerebrovascularEndothelium

Introduction: The xanthine oxidoreductase system is a major source of free radical production in the vasculature. When in the reduced state, xanthine dehydrogenase (XDH), enzymatic production of reactive oxygen species (ROS) is negligible, but in the active, xanthine oxidase (XO) form, ROS generation is pathologically elevated. Radiation has been demonstrated to induce the conversion of XDH to ROS-generating XO in liver and cardiovascular tissue, but not yet in cerebral vasculature. Methods Mouse brain derived endothelial cells (bEnd3) maintained in culture and neurons cultured after primary isolation were irradiated in vitro with a Cs-137 source to 30 Gy in 1 dose. The pharmacologic agents allopurinol, apocynin, and tetrahydrobiopterin (BH4) were pre-incubated for 1 hour prior to irradiation. Cells were stained with dihydroethidium (DHE) to qualitatively assess ROS production. Cell death was quantified by anti-histone immunoassay, and xanthine oxidase activity was quantified by fluorescence conversion assay. Results In cerebral endothelial cells exposed to gamma irradiation, preincubation with the xanthine oxidase inhibitor allopurinol attenuates production of ROS (Figure 1-4), attenuates the enzymatic activity of xanthine oxidase in a dose dependent fashion (Figure 8), and decreases cellular apoptosis compared to untreated control (Figure 6). NADPH oxidase inhibition (apocynin) and induction of eNOS/nNOS isoforms (BH4) inhibit free radical production to a lesser degree than allopurinol with less protection against cell death and no impact on XO activity. These effects are characteristic of endothelial cells and not replicated in neurons (Figure 5, 7). Conclusions These data suggest that high-dose gamma-irradiation amplifies XO activity in cerebral endothelial cells but not in neurons. Activated XO appears to be an important producer of free radical damage in irradiated cerebral endothelium, and direct XO inhibition protects against radiation-induced cell death in vitro. Accordingly, XO inhibition represents an intriguing strategy for radioprotection of cerebral endothelial cells, with direct application to radiosurgery and whole brain radiation.
ADVERTISEMENT

CNS Radioprotectants: Modulators of the Xanthine Oxidoreductase System in CerebrovascularEndothelium

© Copyright 2012
Gupta et al. This is an open access poster distributed under the terms of the Creative Commons Attribution License CC-BY 3.0., which permits unrestricted use, distribution, and reproduction in any medium, provided the original author and source are credited. 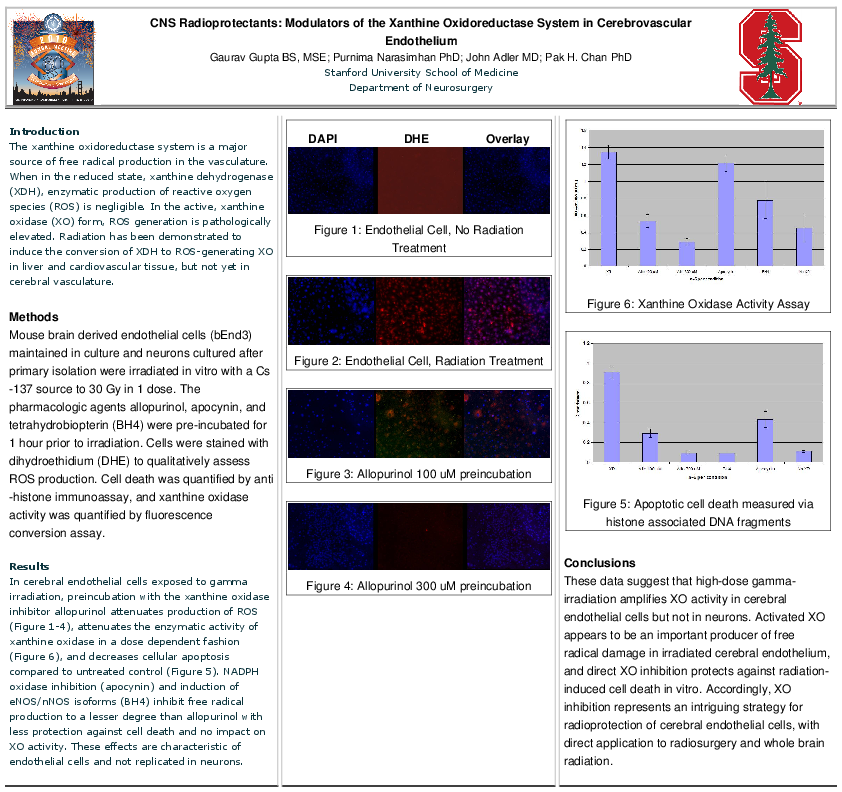