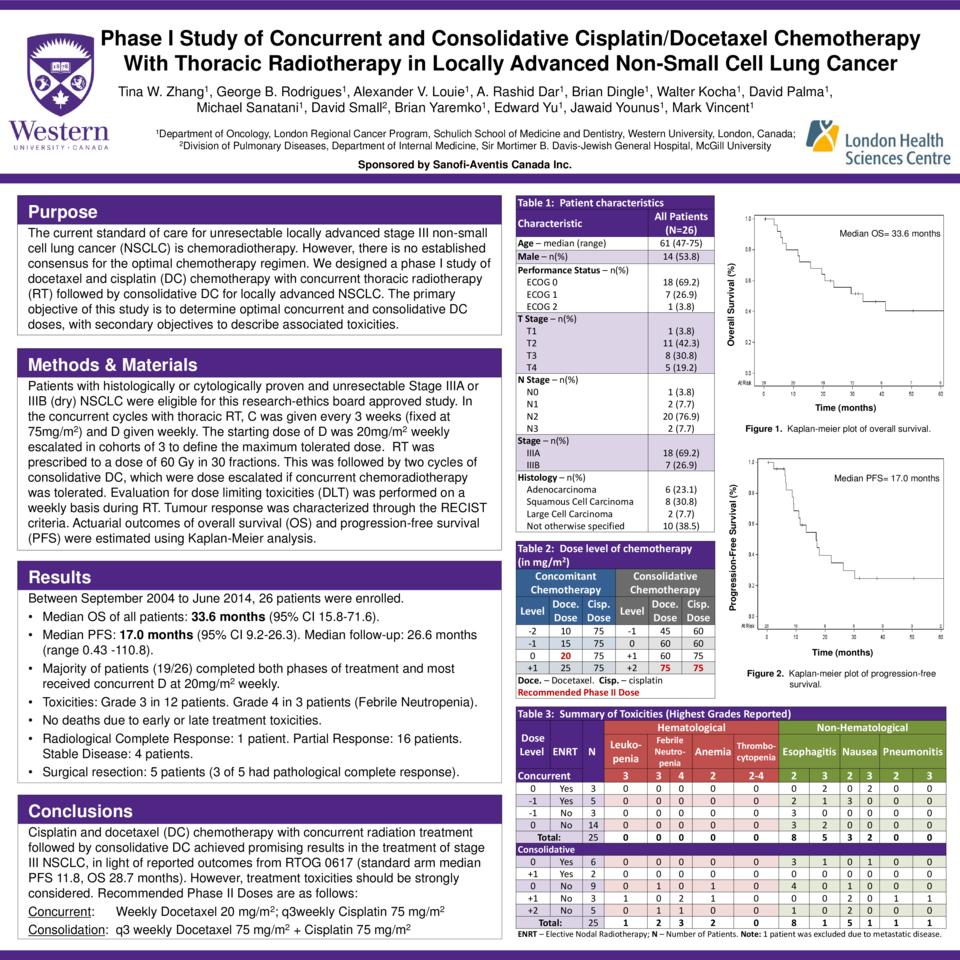 Introduction The current standard of care for unresectable locally advanced stage III non-small cell lung cancer (NSCLC) is chemoradiotherapy. However, there is no established consensus for the optimal chemotherapy regimen. We designed a phase I study of docetaxel and cisplatin (DC) chemotherapy with concurrent thoracic radiotherapy (RT) followed by consolidative DC for locally advanced NSCLC. The primary objective of this study is to determine optimal concurrent and consolidative DC doses, with secondary objectives to describe associated toxicities. Methods and Materials Patients with histologically or cytologically proven and unresectable Stage IIIA or IIIB (dry) NSCLC were eligible for this research-ethics board approved study. In the concurrent cycles with thoracic RT, C was given every 3 weeks (fixed at 75mg/m2) and D given weekly. The starting dose of D was 20mg/m2 weekly escalated in cohorts of 3 to define the maximum tolerated dose (MTD). RT was prescribed to a dose of 60 Gy in 30 fractions. This was followed by two cycles of consolidative DC, which were dose escalated if concurrent chemoradiotherapy was tolerated. Evaluation for dose limiting toxicities (DLT) was performed on a weekly basis during RT. Tumour response was characterized through the RECIST criteria. Actuarial outcomes of overall survival (OS) and progression-free survival (PFS) were estimated using Kaplan-Meier analysis. Results Between September 2004 to June 2014, 26 patients were enrolled. One patient did not receive protocol-specified treatment due to metastatic disease on baseline staging investigations. Of the eligible patients, 18 had stage IIIA and 7 had stage IIIB disease. The median OS of all patients was 33.6 months (95% CI 15.8-71.6). Median PFS was 17.0 months (95% CI 9.2-26.3) with median follow-up of 26.6 months (range 0.43 -110.8). The majority of patients (19/26) completed both phases of treatment and most received concurrent D at 20mg/m2 weekly, which was determined to be the MTD. Eight patients tolerated dose escalation of posterior consolidative C or D. Twelve patients experienced grade 3 toxicities (5 esophagitis, 1 pneumonitis, 3 nausea, 1 leukopenia, and 2 neutropenia). Three patients had grade 4 febrile neutropenia. No patients died due to early or late treatment toxicities. Complete response, partial response, and stable disease were observed in 1, 16 and 4 patients, respectively. Five patients underwent surgical resection, and 3 of 5 did not have evidence of residual disease. Conclusions Cisplatin and docetaxel (DC) chemotherapy with concurrent radiation treatment followed by consolidative DC achieved promising results in the treatment of stage III NSCLC in light of reported outcomes from RTOG 0617 (standard arm median PFS 11.8, OS 28.7 months). However, treatment toxicities should be strongly considered. The recommended phase II doses (RP2D) are weekly docetaxel 20 mg/m2 and q3weekly cisplatin 75 mg/m2 for concurrent chemoradiation and q3 weekly docetaxel 75 mg/m2 and cisplatin 75 mg/m2 for consolidation.

© Copyright 2016
Zhang et al. This is an open access poster distributed under the terms of the Creative Commons Attribution License CC-BY 3.0., which permits unrestricted use, distribution, and reproduction in any medium, provided the original author and source are credited. 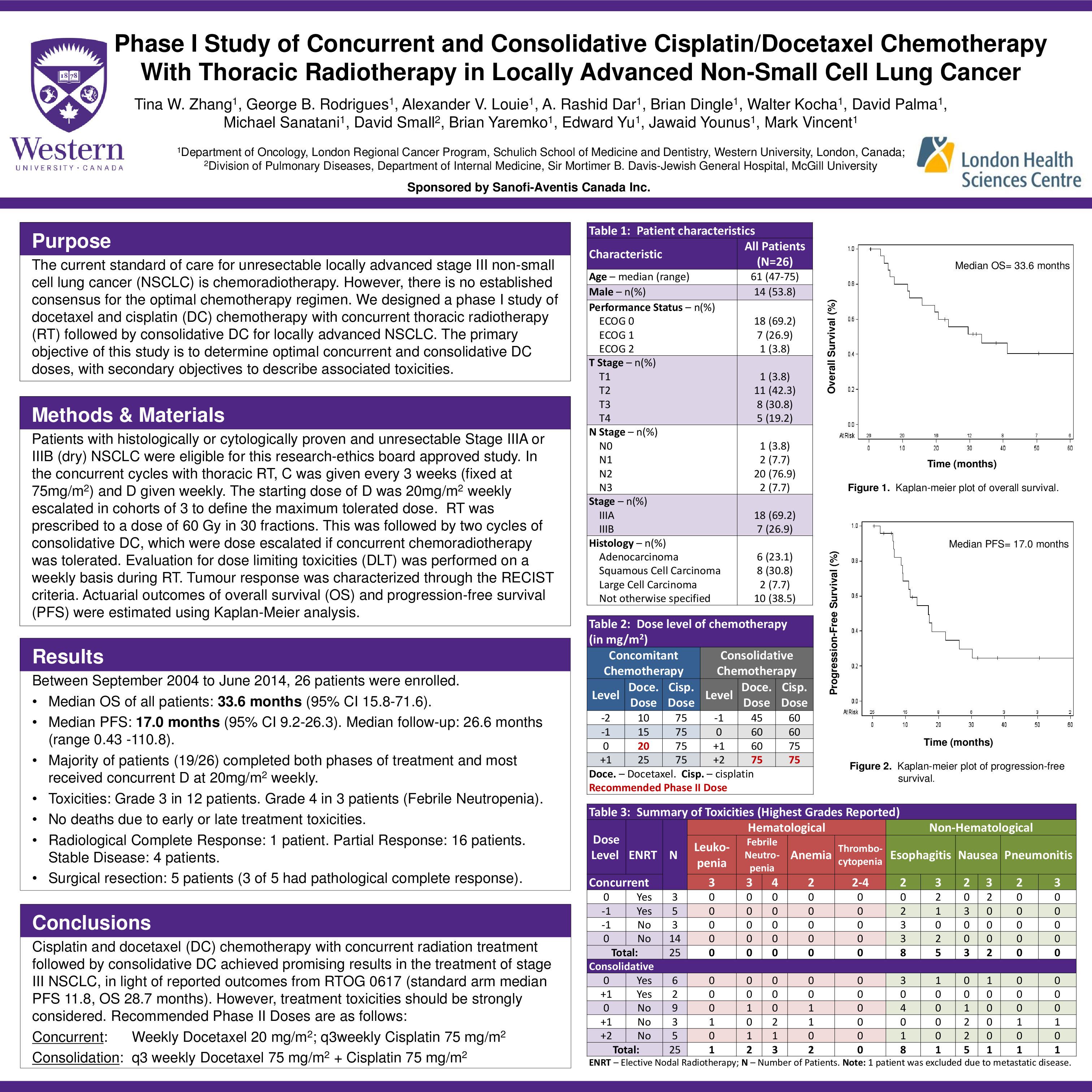