Midventricular ballooning syndrome, an atypical presentation of takotsubo cardiomyopathy (TCM), presents with transient wall motion abnormalities of the midsegment of the left ventricle with apical sparing. In midventricular TCM, apical contractility is unaffected or may be hyperkinetic in contrast to the typical form of TCM. We report a case of atypical TCM, wherein the patient presented with chest pain following choking and coughing spells due to a postnasal drip.

An 86-year-old woman with a past medical history of hyperlipidemia, osteoporosis, hypothyroidism, and papilloma tongue presented to the emergency department with chest pain and shortness of breath. This was preceded by an episode of coughing and choking spells due to a postnasal drip. She had episodes of anxiety and low mood for one year following the death of her life partner. On examination, the patient was alert and well-oriented. Her heart rate was 107 and blood pressure was 138/95. Electrocardiography showed atrial fibrillation and low voltage QRS. Cardiac biomarker troponin T levels were elevated to 0.1 mcg/L (reference range 0-0.03 mcg/l). A transthoracic echocardiogram showed findings of a reduction in the global left ventricular systolic function, an ejection fraction of 47%, and prominent mid anterolateral and inferolateral regional wall motion abnormalities (Figure 1, Video 1). Subsequently, left heart catheterization was done, which excluded significant coronary artery disease but showed a mid-left ventricular wall ballooning during diastole (Figure 2) and systole (Figure 3). Thus, echocardiography, left heart catheterization, and left ventricular angiogram findings (Video 2) suggest a midventricular variant of takotsubo cardiomyopathy (TCM), which is an atypical presentation. At the follow-up visit, the ECG showed a normal sinus rhythm and stress echocardiography showed a normal ejection fraction without regional wall motion abnormalities and improved left ventricular systolic function. 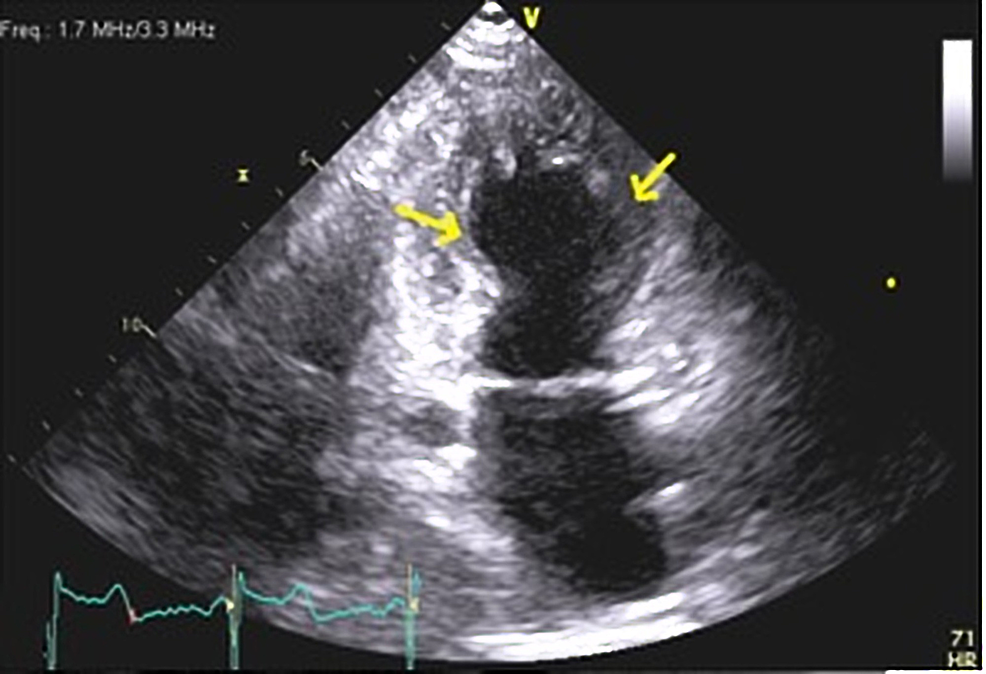 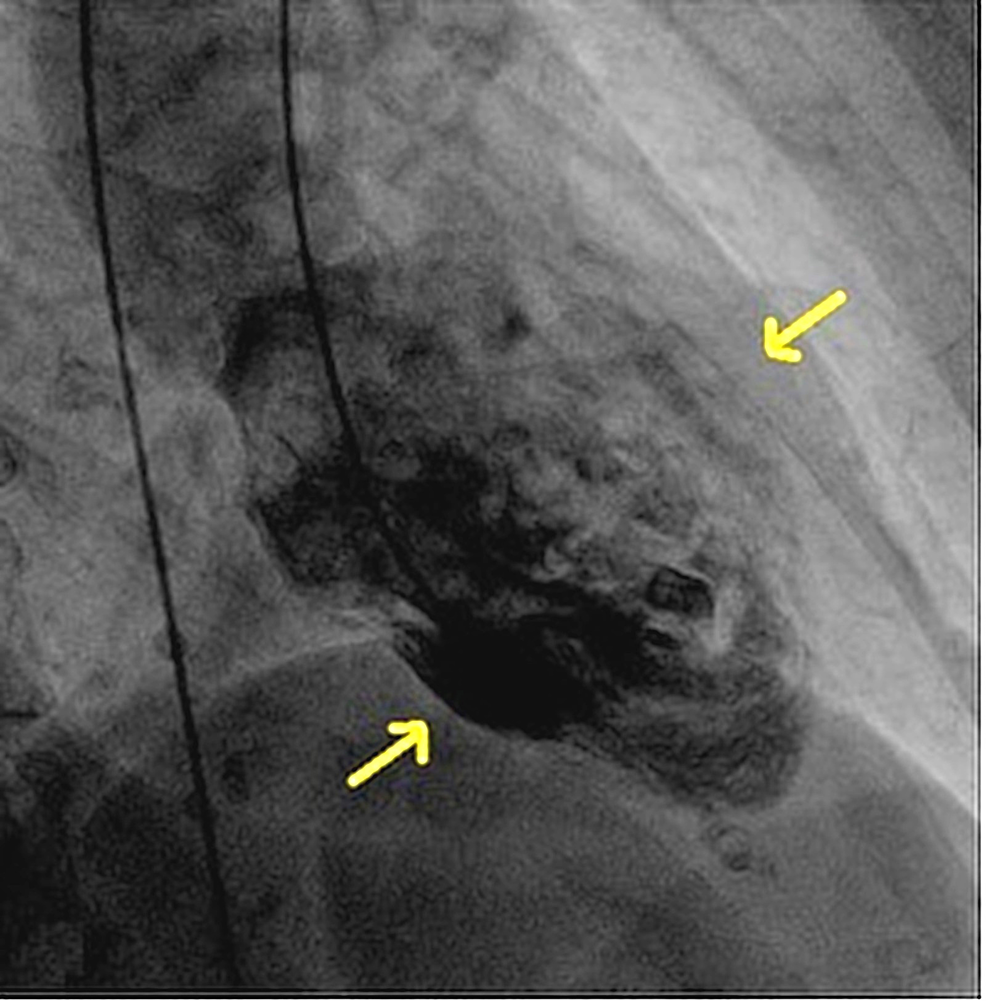 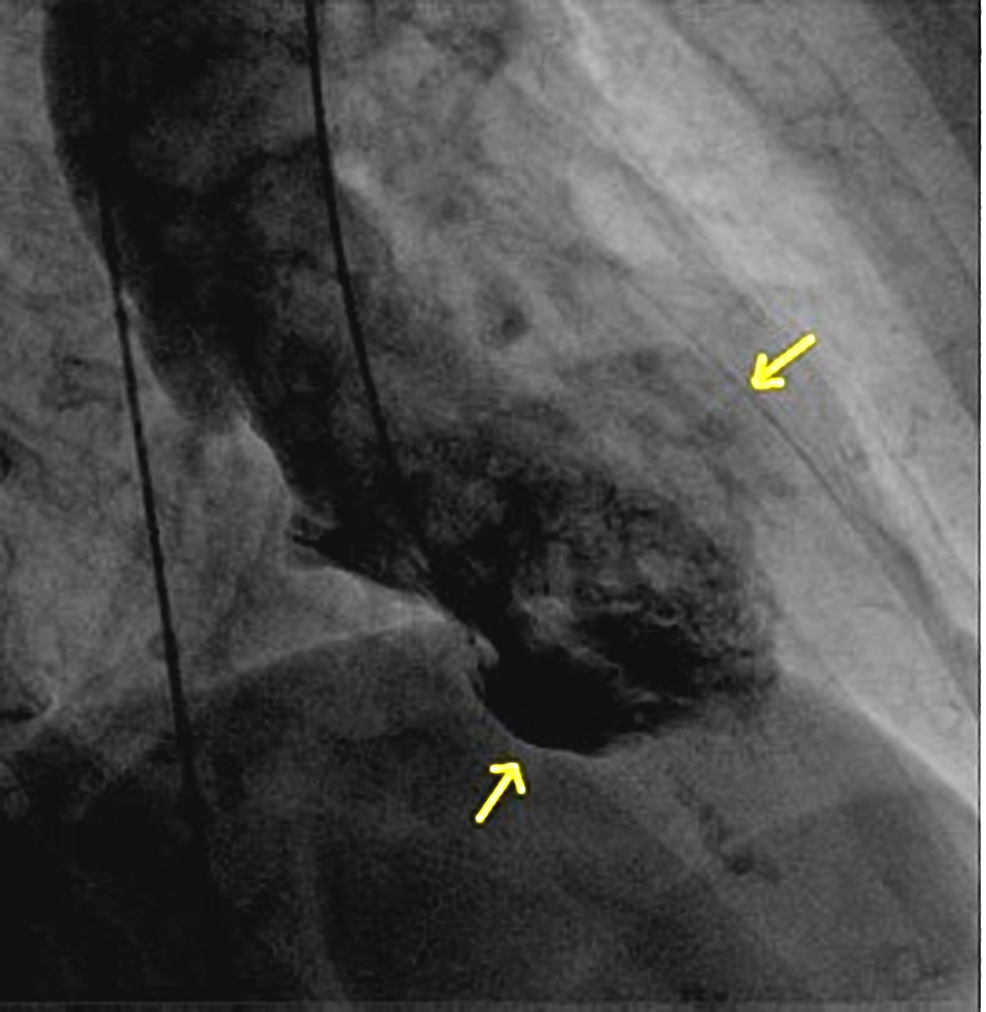 Takotsubo cardiomyopathy (TCM) is typically characterized by hypokinesis of apical ventricular wall motion. It was initially recognized in Japan in 1990. Midventricular ballooning syndrome, an atypical variant of TCM is characterized by hypokinesis of the midventricular segment [1]. The proposed pathogenesis of TCM includes: (1) catecholamine cardiac toxicity; (2) myocardial sympathetic innervation; (3) myocardial microvascular dysfunction; and (4) aborted myocardial infarction [3]. Based on the pattern of left ventricular wall involvement, there are four types of takotsubo cardiomyopathy: (1) inverted/reverse, (2) midventricular, (3) localized and (4) global type. The difference in the distribution, density, and sensibility of adrenergic receptors over the myocardium determines the area of hypokinesis. The area with the highest density of adrenergic receptors will be the most affected [4-5]. Emotional stress has been found to be one of the major triggers of TCM [6]. Our case highlights the fact that even benign conditions, such as choking and coughing spells, can trigger an emotional response that can lead to midventricular TCM.

Prognosis is favorable for most patients with TCM. Our case illustrates that sudden stress, even due to generally benign episodes, such as choking and coughing, can lead to TCM.

© Copyright 2018
Kolla et al. This is an open access article distributed under the terms of the Creative Commons Attribution License CC-BY 3.0., which permits unrestricted use, distribution, and reproduction in any medium, provided the original author and source are credited.

A Review of Catecholamine Associated Cardiomyopathies and Channelopathies