To compare hospital-wide code rates and mortality before and after the implementation of a rapid response team (RRT).

In this large single-institution study, rapid response team implementation was not associated with significant reductions in either hospital-wide code blue or mortality.

In-hospital cardiac arrests continue to have a mortality rate of 80% despite advances in health care [1]. These deadly in-hospital cardiac arrests are preceded by warning signs, such as the derangements of vital signs [2], and the early detection of these warning signs may provide an opportunity to prevent cardiac arrest and its attendant mortality. Based on this, the use of a rapid response team (RRT) has been recommended as a means of reduction of in-hospital mortality [3-4]. An RRT is typically a multidisciplinary team, consisting of a physician, critical care nurse, and respiratory therapist charged with the prompt evaluation, triage, and treatment of patients with signs of clinical deterioration not treated in the intensive care unit (ICU) [5]. The team is triggered by in-house staff when certain predetermined signs of clinical deterioration are observed and can order critical laboratory and imaging studies and medications, transfer the patient to higher levels of monitoring and care, and discuss end-of-life care with the patients and their families independent of the primary physician [6].

To address these conflicting results of previous studies, we have conducted our study. Also, we wanted to know the common triggers for RRT activation in our hospital and the common interventions that the RRT team does after it is activated.

The study design was a prospective cohort with historical controls. The study was carried out at Shifa International Hospital, Islamabad, a tertiary care hospital having surgical and medical subspecialties along with liver and bone marrow transplant departments, from January 21, 2016, to January 20, 2017. Prior to the implementation of the RRT, teaching and training sessions were carried out with all those who had to participate in the RRT system.

Signs and symptoms were displayed in the reception area of every floor, and the floor doctors and nursing staff were trained to activate the rapid response team if they notice any one of these signs and symptoms in any patient. RRT activation occurred via dedicated pagers through the operator with a single emergency telephone number. The team was led by a critical care fellow and included an ICU nurse and respiratory therapist having all the necessary emergency equipment, such as a bag mask, a glucometer, and an endotracheal tube. When activated, the RRT was supposed to be present on the required floor within 10 minutes and was independent in its decision-making (e.g., advising laboratory and radiology investigations, prescribing medications, shifting the patient to a more intensively monitored area, discussing and changing the code status of the patient, continuing to manage and monitor the patient at the same place, etc.)

Data on hospital-wide mortality, code blue, and demographic characteristics were collected prospectively in the hospital core patient database and retrieved for the study. The data on the primary reason for rapid response team activation, rapid response team intervention, and patient disposition after rapid response team evaluation were prospectively collected on a data collection form by the RRT team. All patients admitted to the hospital during the duration of the study, irrespective of their age and gender, were included. Data on code blues, including location, type of arrest, and initial rhythm were similarly collected. Patients who were in procedure rooms when the RRT or code blue team was activated for them were excluded because the procedure room environment is different from the general ward environment. The hospital-wide mortality and code blue data one year before the implementation of the RRT system, from January 20, 2015, to January 20, 2016, were retrieved from the in-hospital core patient database and were compared with the mortality and code blue data collected one year after the implementation of the RRT system (i.e., from January 21, 2016, to January 21, 2017).

Table 1: Summary of study outcomes before and after the implementation of the rapid response team 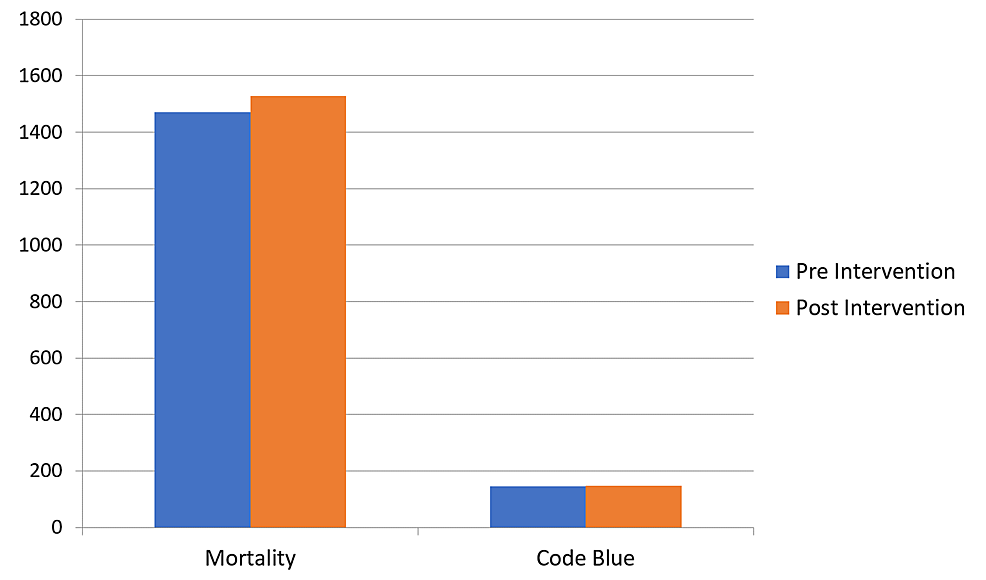 Figure 1: Mortality and code blue before and after the implementation of the rapid response team

In total, 796 RRTs were activated. The most common reason for RRT activation was an alteration in the level of consciousness (192 events; 24.12%) followed by a heart rate of > 140 (153 events; 19.22%) and tachypnea (115 events; 14.45%). The other reasons for RRT activation were hypotension, desaturation, chest pain, uncontrolled bleeding, staff/family concerns, hypertension, bradycardia, seizures, and oliguria (Table 2). 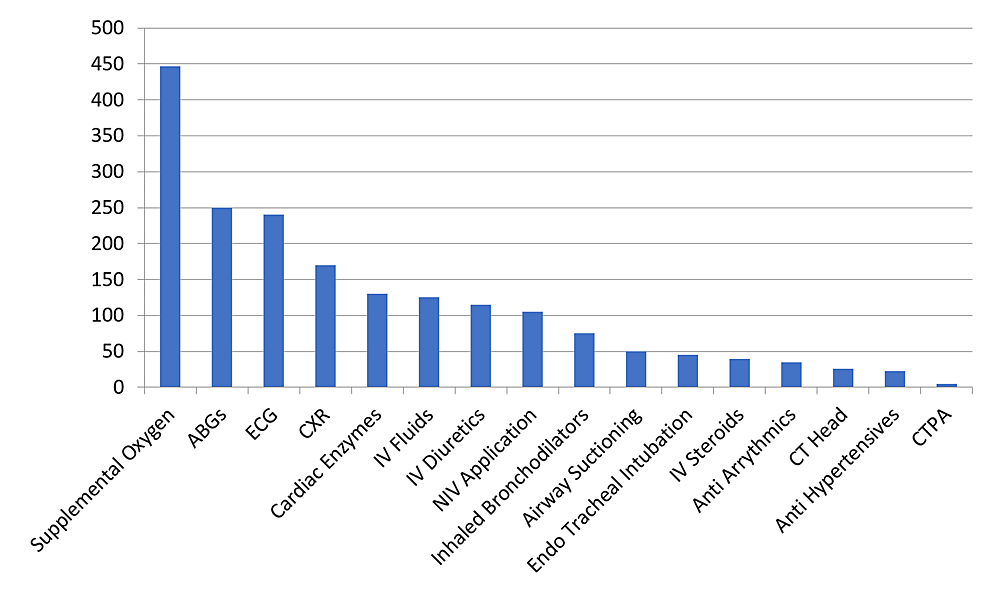 The disposition of patients after RRT activation is shown in Table 3.

The 40 patients whose code status was changed to do not resuscitate remained on the floor and were excluded from the study. Of the remaining 756 patients, 636 were discharged home safely, and 120 expired during the hospital stay; the expiry site of these patients by number and percentage is shown in Table 4

Table 4: Site of expiry of patients during hospital stay

The code status of 40 patients out of a total of 796 patients (5.20%) was changed to the ‘do not resuscitate’ status. It may be a contribution of the RRT directing hospital resources and personnel to patients who are more likely to benefit and referring those patients who need end-of-life care to the palliative care department but how much this is cost-effective was not determined. Our study should be interpreted in the context of following limitations. Though it had more than 40,000 patients in the post-intervention period, it was a single institute study and included both adult and pediatric populations. Outcomes may have been different if both populations had been studied separately. All those who were involved in the activation of the RRT were trained before the implementation of the RRT on those signs and symptoms that should trigger the activation of the RRT. These were displayed in the reception area of every floor, yet, a delay in the activation of the RRT may be a factor in the lack of improvement in hospital-wide mortality and code blue rates after the implementation of the RRT. Our study was a prospective cohort study with historical controls; the two cohorts may not be identical. This is a common problem with all such studies. However, there was no epidemic in the post-implementation. As the post-implementation period was one year and was compared with the population from one year before the implementation, seasonal variation was not an issue. The hospital-wide efforts to improve the quality of patient care would have been expected to decrease the hospital-wide mortality rate and in-hospital code blue rate. However, in our study, there was no difference in mortality rate and code blue rate before and after the implementation of the RRT; therefore, the quality improvement effort was not a confounding factor.

We acknowledge the contribution of all critical care fellows, respiratory therapists, and ICU nurses of Shifa International Hospital in data collection, the hospital core database department for help in retrieving the data, and the in-house staff on all the floors for their cooperation. Special thanks to the hospital administration for providing logistic support for the study. No one received any compensation for their contribution.

© Copyright 2018
Yousaf et al. This is an open access article distributed under the terms of the Creative Commons Attribution License CC-BY 3.0., which permits unrestricted use, distribution, and reproduction in any medium, provided the original author and source are credited.

Figure 1: Mortality and code blue before and after the implementation of the rapid response team

Table 1: Summary of study outcomes before and after the implementation of the rapid response team

Table 4: Site of expiry of patients during hospital stay