Metastatic melanoma refractory to checkpoint inhibitors is a challenging clinical scenario. We present the case of a patient who was refractory to standard of care but was able to achieve a durable complete remission with the combination of stereotactic body radiation therapy (SBRT), talimogene laherparepvec (TVEC), and ipilimumab.

While immunotherapy has dramatically changed the landscape of melanoma treatment, not all patients will respond to checkpoint inhibitors. Data have suggested that combining checkpoint inhibitors with other modalities of therapy may increase the response rate and perhaps convert a non-responder to a responder [1-3]. Checkpoint inhibitors have been combined with radiation therapy in case reports and case series and with talimogene laherparepvec (TVEC) in randomized trials [1-4]. We present a case of a heavily pretreated patient with metastatic melanoma who failed to respond to TVEC plus ipilimumab but responded dramatically to the combination of TVEC plus stereotactic body radiation therapy (SBRT) followed by ipilimumab.

A 66-year-old male patient with a five-year history of BRAF V600E positive melanoma was seen for progressive metastatic disease. He was initially diagnosed in 2012 with a T2a (1.2mm, non-ulcerated) superficial spreading cutaneous melanoma on his back five years prior which was treated with local excision alone. He developed local recurrence 17 months later. Wide local excision and sentinel lymph node biopsy (SLNB) was done with pathology revealing a locally recurrent melanoma extending to a depth of 11 mm with associated microsatellite lesions. The sentinel lymph node (SLN) was negative. He was treated with adjuvant peginterferon alfa-2b. Twelve months later he developed three cutaneous metastases for which he received TVEC plus ipilimumab in a clinical trial but developed progressive cutaneous metastases. Treatment was switched to pembrolizumab and he had a complete response to his cutaneous lesions. A positron emission tomography-computed tomography (PET-CT) scan after one year of therapy showed no residual cutaneous activity but did reveal one FDG (fluorodeoxyglucose)-avid left axillary lymph node which was treated with SBRT. He had a complete response (CR) after SBRT for five months until he presented with a recurrent metastatic lesion on his back. At this point, nivolumab was started. After three months, he developed further cutaneous metastases with a total of eight lesions ranging in size from 4 to 7 mm. Therefore, dabrafenib and trametinib were started and although he had a good response, he developed autoimmune side effects including grade 3 trigeminal neuralgia, grade 2 pyrexia, chills, and shortness of breath. Dabrafenib and trametinib were discontinued. Shortly thereafter, more than 20 new cutaneous metastases appeared (Figure 1A-B). 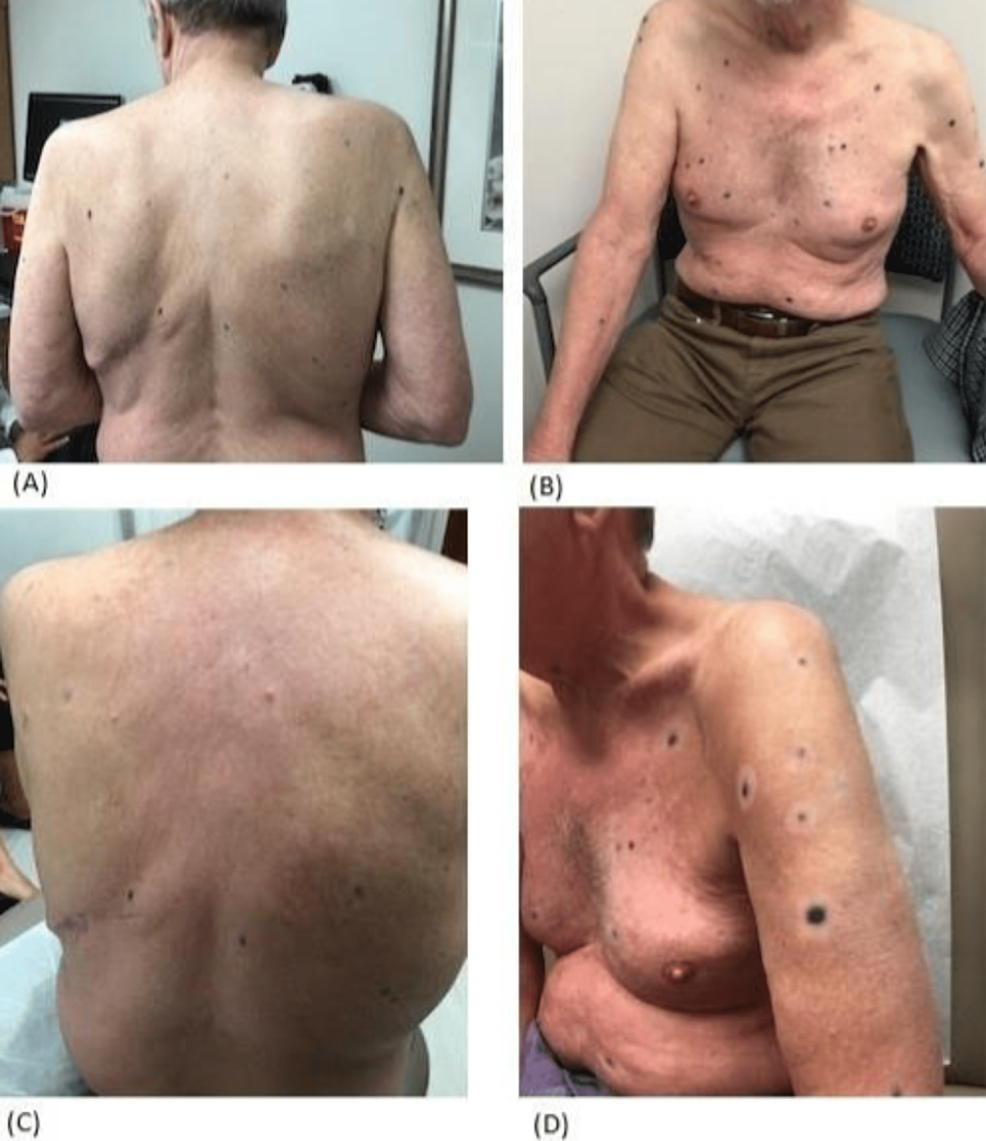 Given his limited options, we recommended therapy with a combination of ipilimumab (3 mg/kg every 3 weeks) and TVEC. He received two treatments of TVEC (0.5 mL) to eight cutaneous lesions, after which a PET scan showed a new adrenal metastasis. This was treated with SBRT (5 Gy over five fractions) followed by low-dose ipilimumab (3 mg/kg every 3 weeks for four doses). The patient developed recurrent episodes of arthralgias and myalgias requiring brief courses of corticosteroids. He also had a recurrence of trigeminal neuralgia which again resolved with corticosteroids. New metastatic lesions continued to appear until after the second cycle of ipilimumab. Four months after completing ipilimumab, the hyperpigmented lesions began to fade and a vitiliginous halo had developed around every lesion (Figure 1c-d). He underwent a punch biopsy of four different cutaneous lesions, including one that had been previously treated with TVEC, one that had not been treated, one that had appeared after treatment with TVEC, and one that appeared during treatment with ipilimumab. In all lesions, pathology showed no residual malignant melanoma but only melanin-laden macrophages indicating a complete pathologic response to therapy (Figure 2A-D). 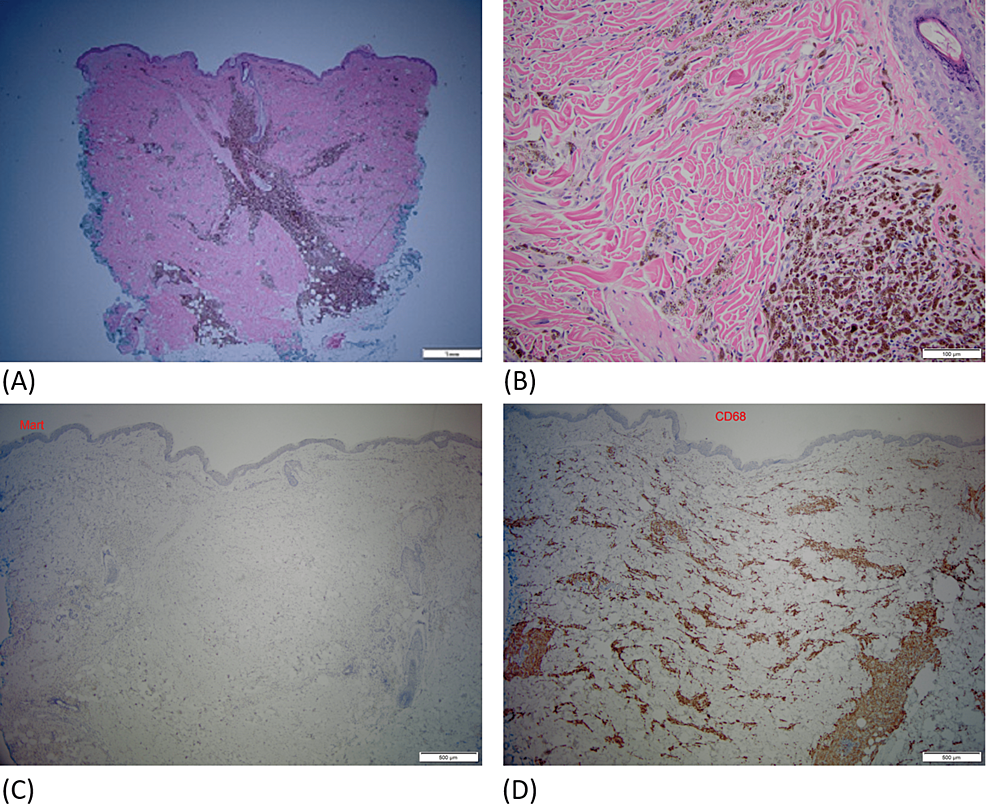 Checkpoint inhibition has revolutionized the treatment of melanoma, but not all patients will respond and relapses are common. This patient had relapsed progressive melanoma after four lines of therapy. However, he was able to achieve a durable complete remission after receiving a second course of TVEC followed immediately by SBRT and ipilimumab, despite being refractory to TVEC and ipilimumab previously. This case suggests that refractoriness to immunotherapy may be overcome by the addition of local therapies (TVEC or SBRT). Both TVEC and SBRT have been postulated to be able to act synergistically with checkpoint inhibitors.

The TVEC has been studied in combination with ipilimumab and the combination showed improved response rates over ipilimumab alone (39% vs. 18% odds ratio, OR 2.9; confidence interval, CI 1.5-5.5, p=0.002) in a randomized phase II trial [2]. The addition of TVEC to pembrolizumab did not improve progression free survival (PFS) or overall survival (OS) in a large phase III trial [5]. However, this trial was conducted in anti-PD-1 (programmed cell death protein 1) therapy naïve patients, not refractory patients. Little is known about the role of TVEC in this patient population, but other cases in addition to our own, suggest that TVEC may be a useful tool to overcome resistance to checkpoint inhibition [6].

Radiation therapy has been proposed to induce responses to anti-CTLA4 (cytotoxic T-lymphocyte-associated protein) therapy by causing cancer cell lysis. It may increase the expression of tumor-specific antigens in the tumor microenvironment, leading to boosting or priming of effector T cell function against cancer [1]. This putative effect has been previously demonstrated in several cases and case series [3-4, 7].

In summary, this heavily pre-treated patient who previously progressed on anti-CTLA4, anti-PD1, and TVEC therapies, achieved a complete clinical, histologic and radiographic response after receiving SBRT plus TVEC, followed by ipilimumab. This case allows us to hypothesize that not only the combination of, but also the sequencing of therapies in melanoma may be important by first “priming” and then later “unleashing” the immune system. The case also demonstrates that the lack of response to checkpoint inhibitors may not prohibit reusing them later in the same patient as part of a combination strategy. Therefore, while novel therapies are needed in melanoma, further research into the sequencing and reuse of currently available therapies may also be beneficial. Research in this area could allow us to optimize and obtain the maximum benefit from all available therapies, potentially leading to improved patient outcomes.

© Copyright 2022
Wolfe et al. This is an open access article distributed under the terms of the Creative Commons Attribution License CC-BY 4.0., which permits unrestricted use, distribution, and reproduction in any medium, provided the original author and source are credited.