Mucosa-associated lymphoid tissue lymphoma (MALToma) is a low grade B-cell lymphoma that develops from the lungs, intestinal tract, salivary gland, and other organs and is included under extranodal marginal zone lymphoma. When a primary pulmonary MALToma develops from bronchus-associated lymphoid tissue (BALT), it is called BALT lymphoma (BALToma). The etiology of MALToma is not clear; however, an association between chronic inflammatory conditions and BALToma has been observed. Transformation of MALToma to high grade lymphoma is very rare. We experienced a case of MALToma that had developed from the lungs in a patient who was undergoing treatment for latent tuberculosis and rapidly transformed into high grade B-cell lymphoma.

The patient is a 63-year-old man with a past medical history of MALToma of the lung who presented with generalized weakness for the past one month associated with cough, fever, night sweats, and shortness of breath. The patient also had anorexia and weight loss of 15 pounds over one month. He denied a history of smoking. The patient was under treatment with isoniazid and pyridoxine for latent tuberculosis based on a positive skin tuberculin test.

On physical examination, his blood pressure was 110/59 mmHg, heart rate 118 beats per minute (bpm), respiratory rate 18/min, saturating 99% on room air with a temperature of 98.9oF. The patient was in no cardiopulmonary distress. A cardiovascular examination revealed no jugular venous distension, normal S1-S2, and no murmurs. On lung auscultation, the patient had rales at the left lung base. 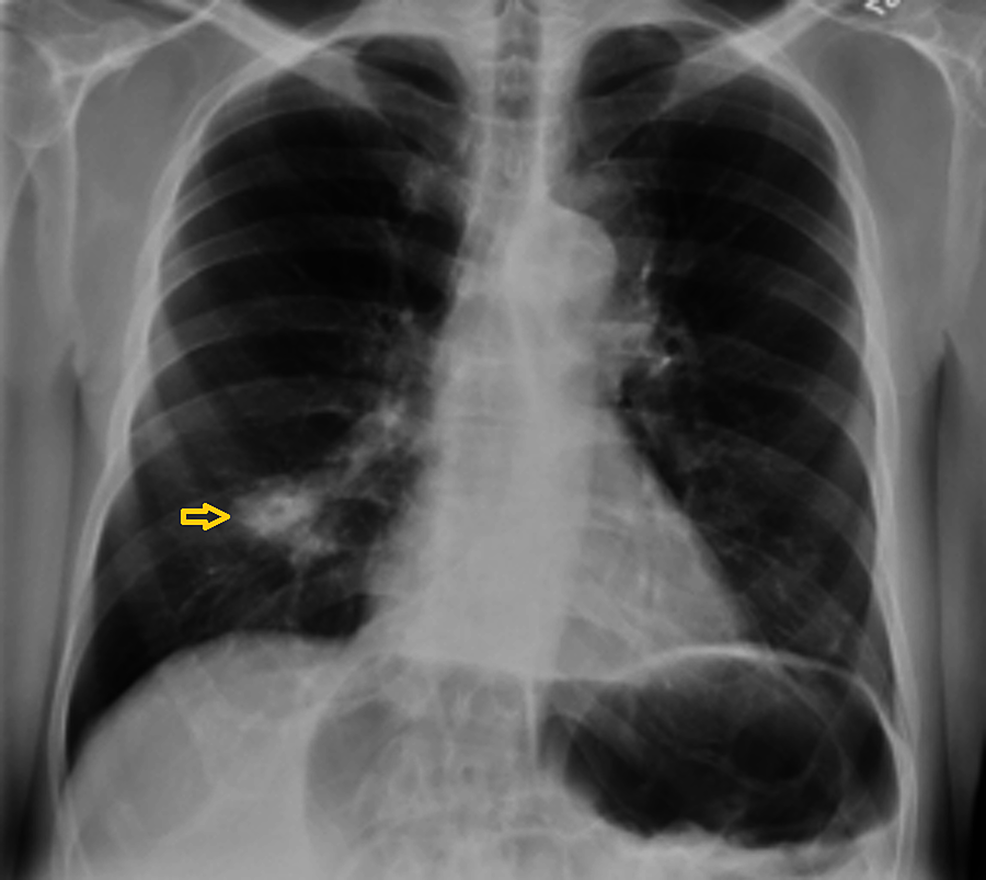 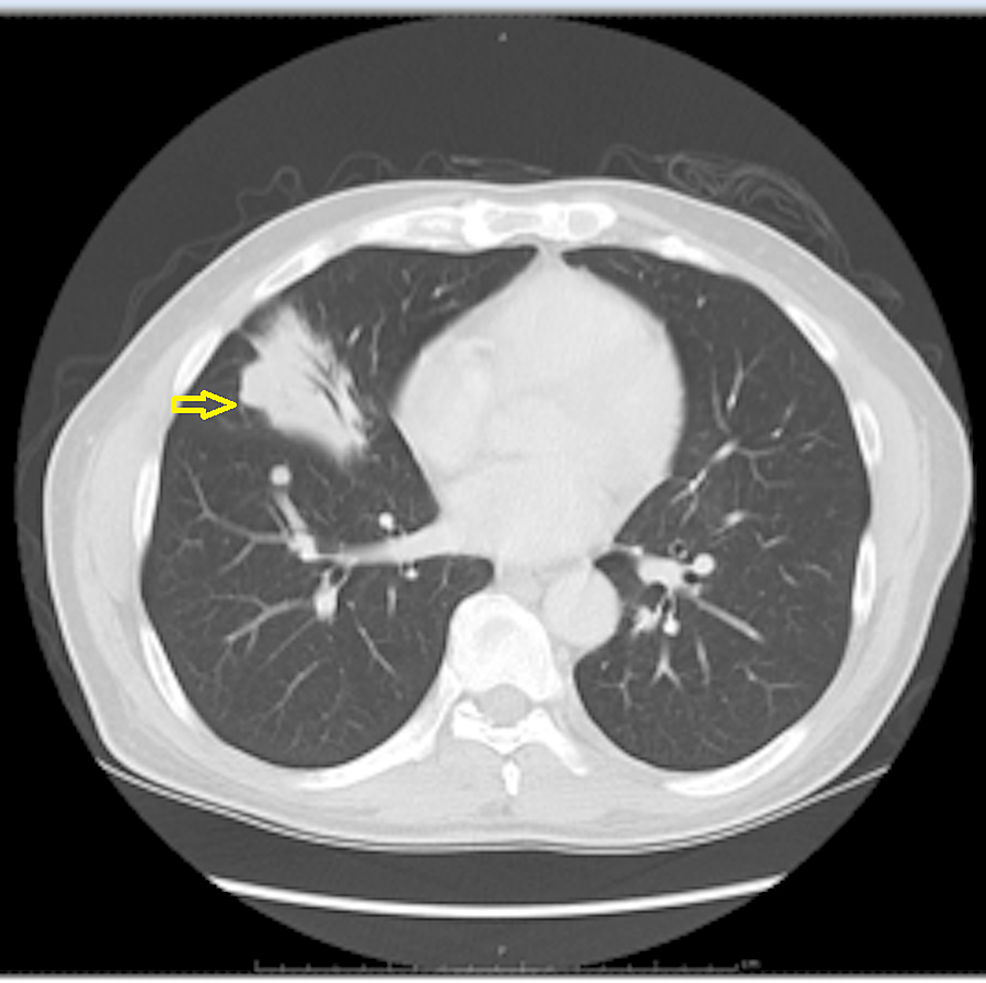 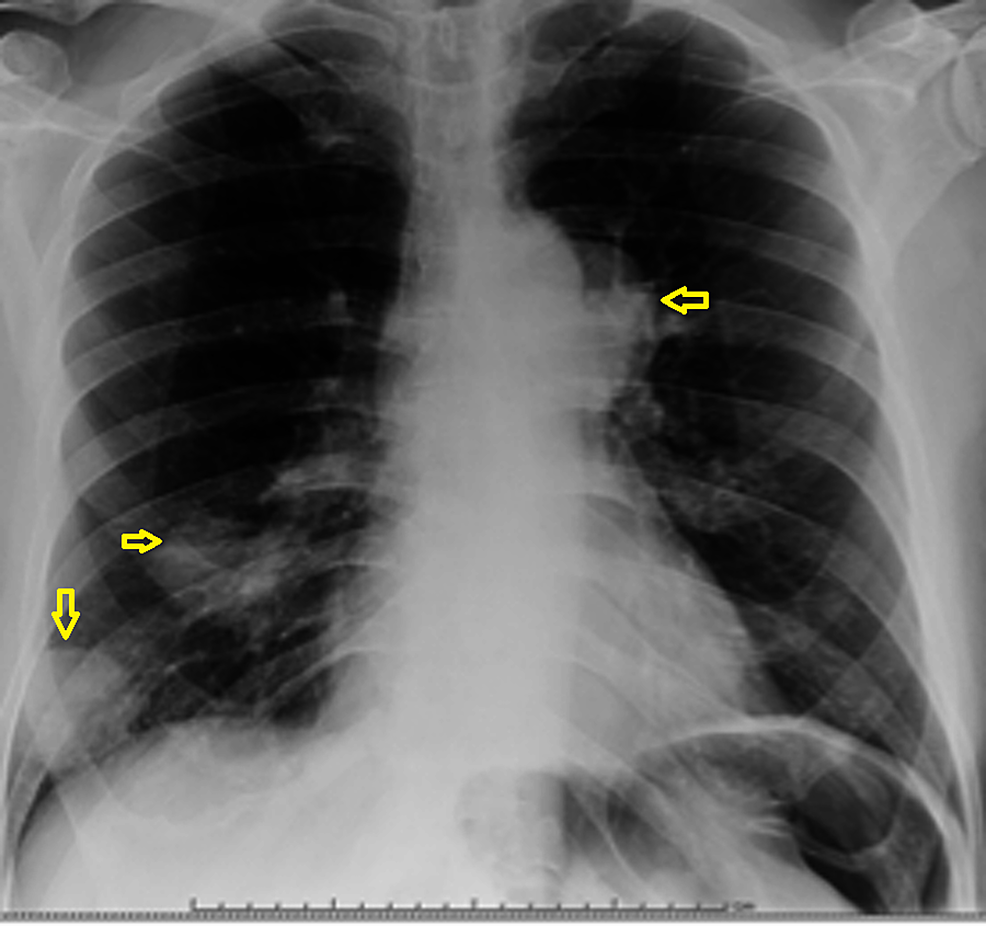 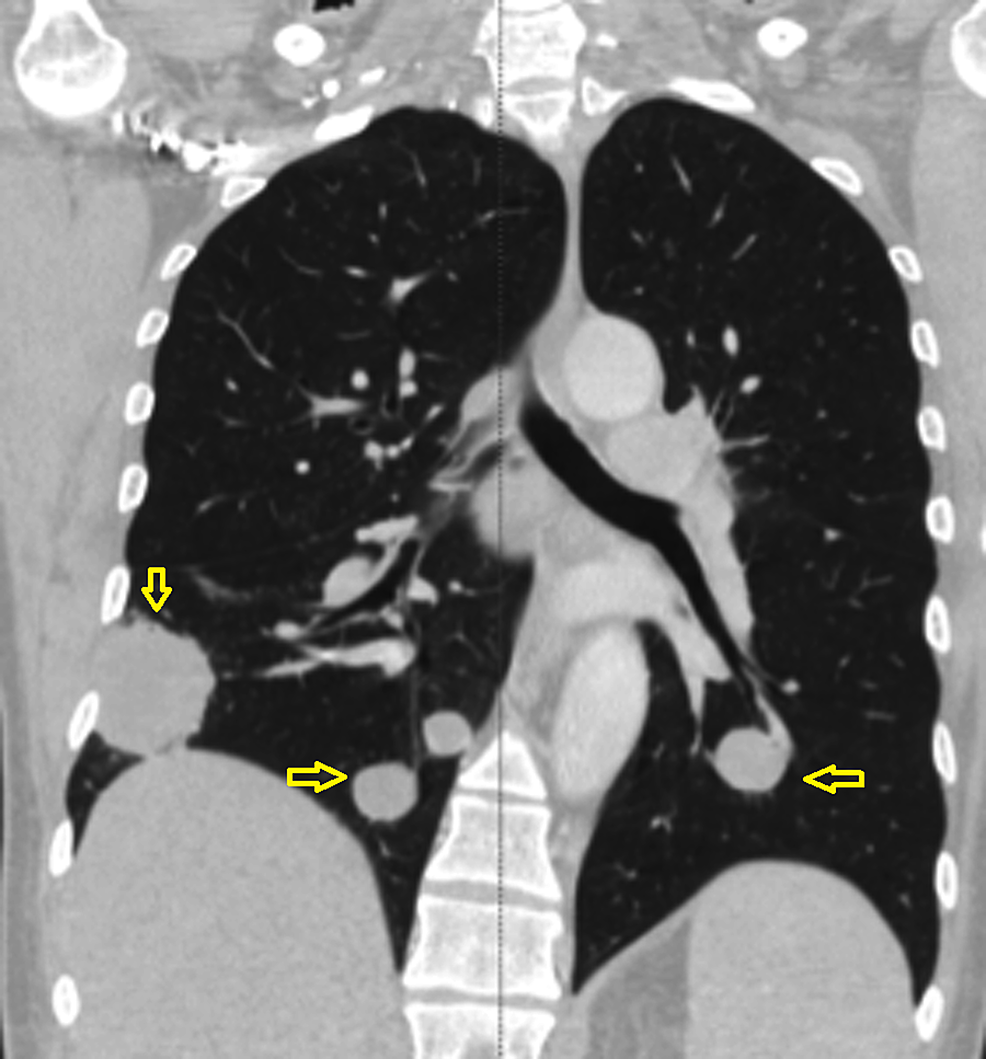 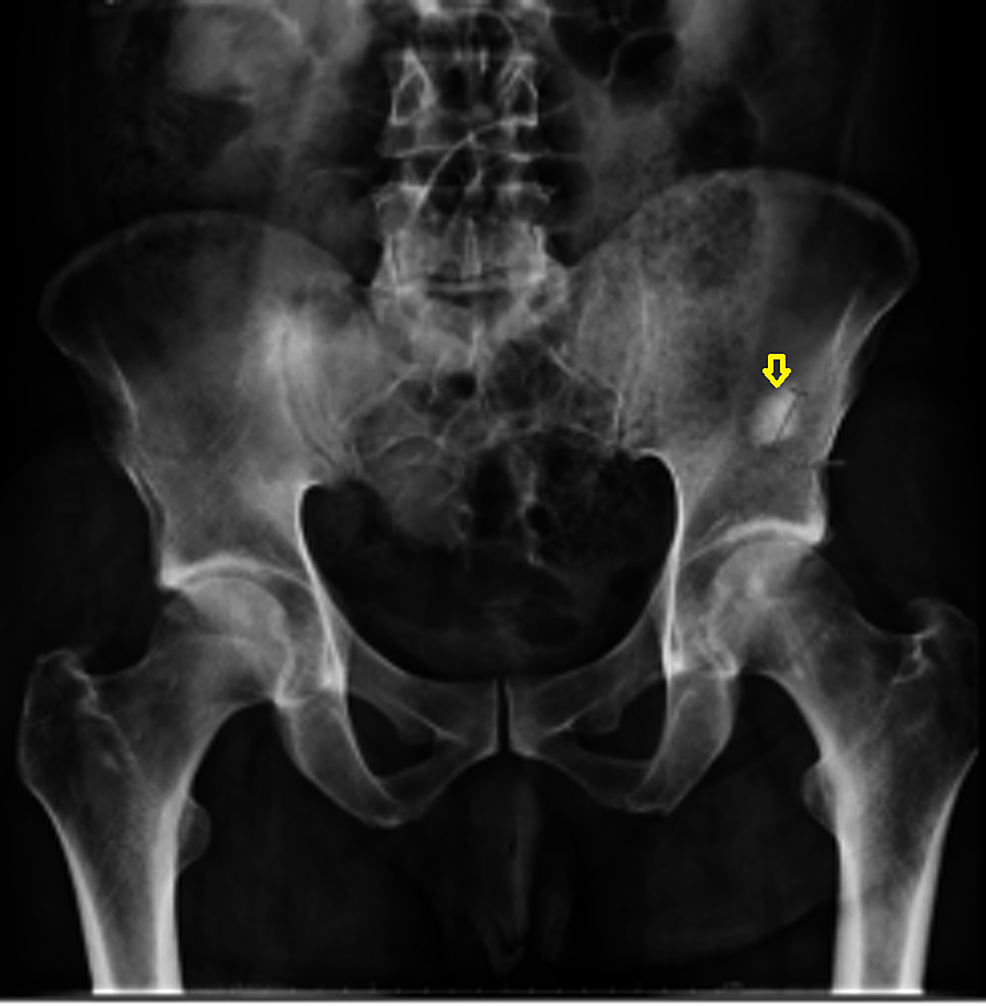 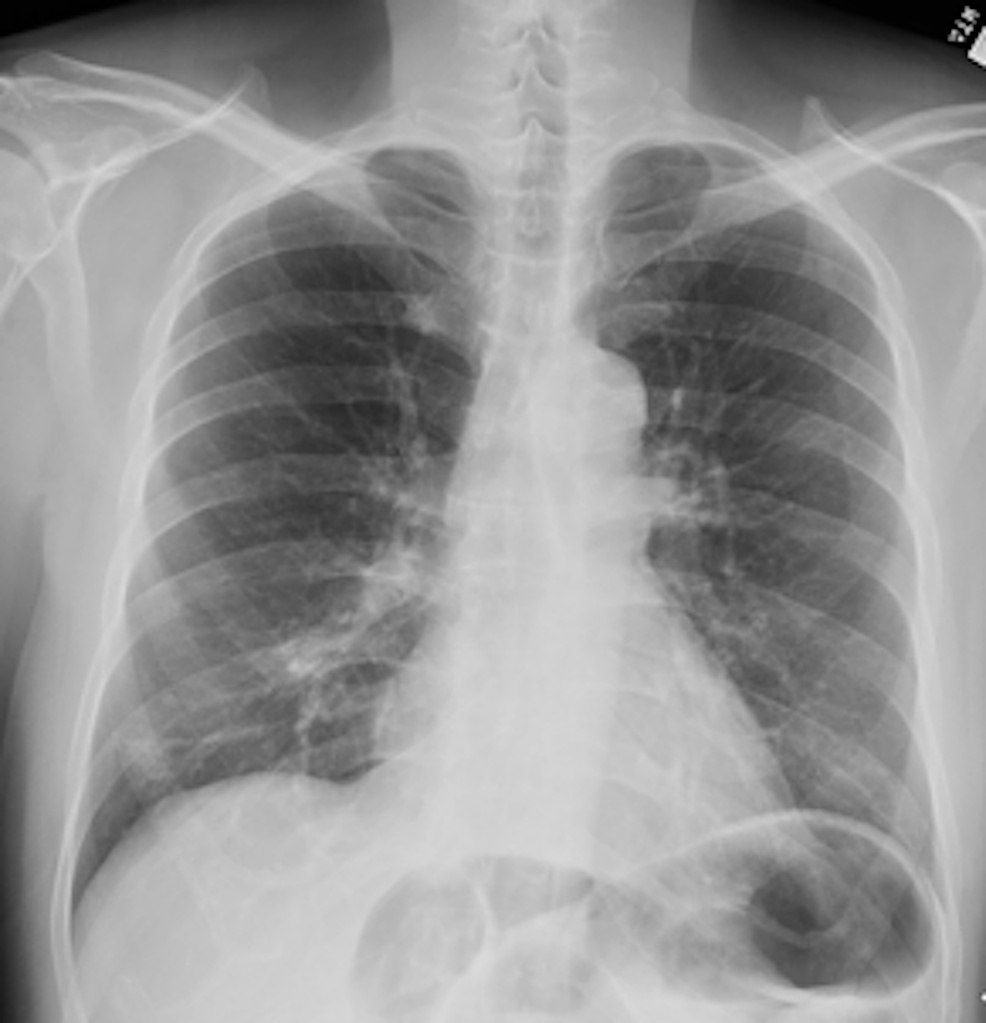 BALToma is rarely seen in a healthy adult; however, it has been observed with increased prevalence among patients with prior bronchitis-bronchiolitis and bronchiectasis. This correlation with chronic inflammatory condition is remarkably similar to gastric mucosa-associated lymphoid tissue (MALT) lymphoma, which suggests that they too may be caused by the chronic inflammation induced by a microbiologic agent [4]. We know that helicobacter pylori is known to be the causative organism in gastric MALToma. Although the coexistence of BALToma with tuberculosis has been reported in several studies [5], at present no microbiologic agent has been confirmed as the causative organism for pulmonary MALToma. Similar to observations noted in other cases, the fact that our patient developed MALToma while being treated for latent tuberculosis might highlight the possible association between the two.

Patients with BALTomas usually have an indolent clinical course. Most patients are asymptomatic and when present, the symptoms are non-specific and include dyspnea, cough, fever, hemoptysis and weight loss. B-symptoms are uncommon in MALToma, and herald the development of other complications like diffuse large B-cell lymphoma. A study conducted by Jung, et al. revealed that 61.5% of patients had no pulmonary or constitutional symptoms [6].

The radiographic appearance of primary pulmonary lymphoma is variable. The lesions can appear as airspace consolidation or nodule(s) and can be multiple and involve both lungs [7].

Diagnosis can be made by obtaining tissue specimens—either by open thoracotomy or video-assisted thoracoscopic surgery. Specific diagnosis can be made using cell marker study or molecular techniques such as flow cytometry [8]. In our cases, however, those studies were not performed. However, it is recommended to rule out other differentials including reactive changes with biopsy.

For the management of MALT lymphoma, initial observation can be a reasonable option for asymptomatic patients with indolent clinical course [6]. However, for a patient who has symptoms, single-agent or combination chemotherapy can be considered. In the study by Jung, et al. either single-agent chlorambucil or combination therapy with cyclophosphamide, vincristine, and prednisone (CVP) was given to eight patients with MALT lymphoma. Five patients achieved complete resolution while three achieved partial resolution [6]. Similarly, our patient was symptomatic and received R-CHOP treatment with complete remission.

With regards to treatment options for non-MALT lymphoma, which are mostly intermediate to high grade tumors with worse prognosis, adjuvant chemotherapy or radiation therapy need to be considered [9].

We recommend that BALTomas be considered in patients with chronic pulmonary symptoms and previous history of pulmonary tuberculosis especially in those showing suboptimal clinical response to usual antibiotic treatment. A tissue diagnosis is indicated in cases presenting with consolidations that do not respond to appropriate therapy. A lung biopsy with adequate tissue sample for immunological studies is indicated for accurate diagnosis. We also recommend further research into establishing an etiologic association between prior tuberculous exposure and the development of MALToma so that a more effective strategic management can be drawn.

The authors would like to acknowledge Dr. Samuel Gbeminiyi.