Dyslipidemia is quite prevalent in non-insulin dependent diabetes mellitus. Maintaining tight glycemic along with lipid control plays an essential role in preventing micro- and macro-vascular complications associated with diabetes.

The main purpose of the study was to highlight the relationship between glycosylated hemoglobin (HbA1c) and triglyceride levels. This may in turn help in predicting the triglyceride status of type 2 diabetics and therefore identifying patients at increased risk from cardiovascular events. Hypertriglyceridemia is one of the common risk factors for coronary artery disease in type 2 diabetes mellitus (DM). Careful monitoring of the blood glucose level can be used to predict lipid status and can prevent most of the complications associated with the disease.

This is a cross-sectional study using data collected from the outpatient diabetic clinic of Jinnah Postgraduate Medical Centre (JPMC) Karachi, Pakistan. Patients of age 18 years and above were recruited from the clinic. A total of consenting 509 patients of type 2 diabetes mellitus were enrolled over a period of 11 months.

For statistical analysis, SPSS Statistics for Windows, Version 17.0 ( IBM Corp, Armonk, New York) was used and Chi-square and Pearson’s correlation coefficient was used to find the association between triglyceride and HbA1c. The HbA1c was dichotomized into four groups on the basis of cut-off. Chi-square was used for association between HbA1c with various cut-off values and high triglyceride levels. Odds-ratio and its 95% confidence interval were calculated to estimate the level of risk between high triglyceride levels and HbA1c groups. The p-value < 0.05 was considered statistically significant for all the tests applied for significance.

After adjusting for relevant covariates, glycated hemoglobin was positively correlated with high triglyceride. Hence, HbA1c can be an indicator of triglyceride level and can be one of the predictors of cardiovascular risk factors in type 2 diabetes mellitus.

Type 2 diabetes mellitus is one of the prevalent diseases increasing health burden in both developed and underdeveloped countries. Prevalence of diabetes is noted to be higher in Asians (people from Pakistan, India, and China) as compared to Caucasians [1-2]. The significant factors responsible for this outstanding prevalence in Asians as compared to Caucasians are the sedentary lifestyle changes, rapid urbanization & adoption of industrialized food culture which leads to obesity and insulin resistance. In Pakistan, a recent study showed that the prevalence of non-communicable diseases like type 2 diabetes mellitus has doubled as compared to data collected in 2004. The health burden of diabetes in some of the semi-urban area was found to be 14.6% [3].

Dyslipidemias is one of the modifiable risk factors for coronary artery disease in type 2 diabetes. Atherogenic or diabetic dyslipidemia is defined by a profile of low- and high-density lipoprotein and high triglycerides. It is an independent predictor of coronary artery disease or silent myocardial ischemia [3,8]. High triglycerides can be dictated by many factors including genetic or acquired [9]. To rule out other causes, we only include patients without any familial dyslipidemia or history of alcohol intake. As these two factors also play a role in increasing triglycerides as compared to polygenic etiologies like obesity, insulin resistance or diabetes mellitus [10-11].

The literature review was evident that hypertriglyceridemia is linked to high glucose levels and increased risk of type 2 diabetes [12-13]. In our study, correlation of HbA1c with high triglycerides signifies HbA1c as a direct marker of hypertriglyceridemia and an indirect marker of risk assessment of coronary artery disease. It is important to understand the concept of insulin resistance and dyslipidemia predisposing to atherosclerosis [14-15]. Cholesterol lowering through secondary prevention by lifestyle changes or statin therapy has tremendously improved cardiac outcome in diabetes [5].

Our exclusion criteria were patients with missing data, taking statins or suffering from renal, hepatic, cardiac or thyroid diseases, and familial hypercholesterolemia. Venous samples of patients were collected after 12-hour fasting for measurement of triglyceride levels and glycated hemoglobin (HbA1c) for a period of 11 months. Glycosylated hemoglobin (HbA1c) was determined by a high-performance liquid chromatographic (HPLC) method. Serum triglycerides were estimated by enzymatic colorimetric method using glycerol kinase.

Data analysis was done through SPSS version -17 (IBM Corp, Armonk, New York). Continuous variables like age, lipid function test, HbA1c, and duration of diabetes were described, mean while categorical variables like gender, risk factor history like smoking, comorbidities like peripheral arterial disease and hypertension and lifestyle were presented in frequencies and percentages. Pearson correlation test (r) was used to evaluate the relationship between HbA1c and triglycerides. Chi-square was used for association between HbA1c with various cut-off values and high triglyceride levels. Odds-ratio & its 95% confidence interval was calculated to estimate the level of risk between high triglyceride levels and HbA1c groups. The p-value < 0.05 was considered statistically significant for all the tests applied for significance.

Selected characteristics were determined in four groups of HbA1c and their mean value is tabulated in (Tables 2-3). 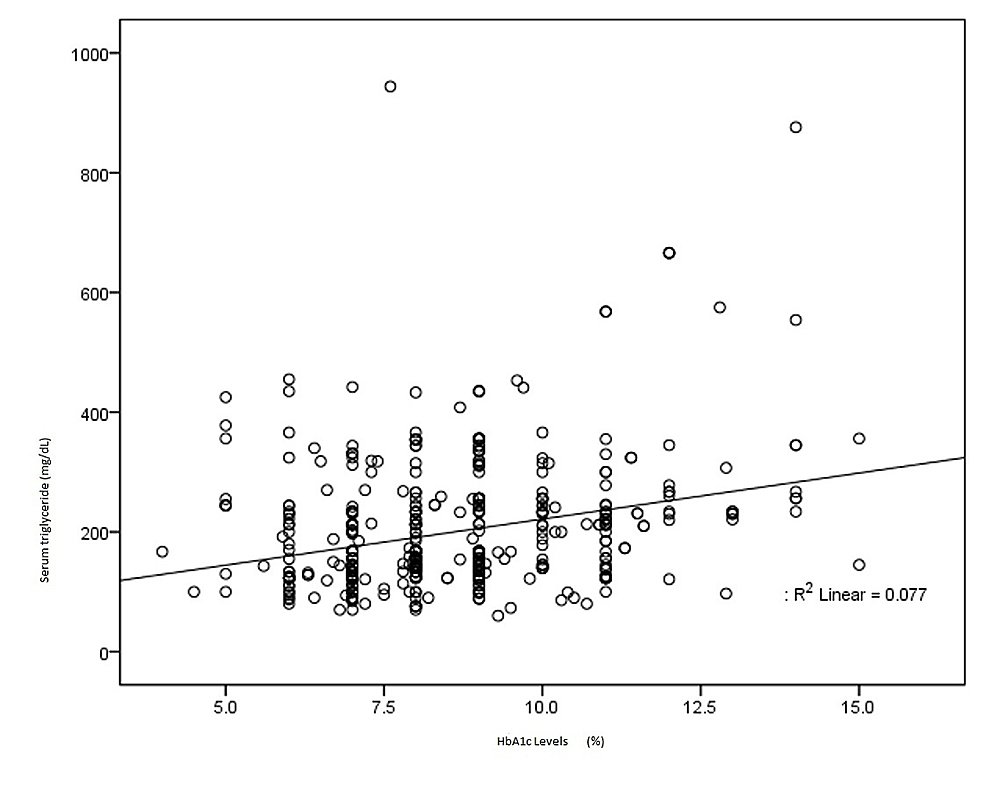 Diabetes is a multifactorial disorder having a wide range of lipid abnormalities. In type 2 diabetes mellitus, there is an increased incidence of hypertriglyceridemia as compared to other lipid abnormalities [16-17]. This study evaluated the correlation between glycated hemoglobin (HbA1c) and triglycerides level and the results showed that there is a significant correlation between high HbA1c and high triglyceride. This may in turn help in predicting the triglyceride status of type 2 diabetics from the degree of glycemic control and therefore identifying patients at increased risk from cardiovascular events [18-19].

Lebovitz suggested that there is a lipotoxic mechanism by triglyceride which interferes with gastric or neural pathway which regulates glycemic control [19]. In most of the studies, there is a correlation found between glycemic control and dyslipidemia [20]. In a recent study, it was evident that there was a positive correlation between HbA1c and high triglycerides and HbA1c can be used as a potent marker for dyslipidemia and mitigate the macro- and micro-vascular complications of disease [21].

Diabetes is an independent risk factor for developing cardiovascular risk. Cardiovascular events are also the most common cause of death in diabetes [22-23]. Gluco-centric medications might help in improving glycemic control but their role in preventing cardiovascular disease is limited. According to the records mandated by American Association of Clinical Endocrinology (AACE). In 2016, approximately 660,000 United States residents will have a new coronary event as myocardial infarction or atherosclerotic cardiovascular event (ASCVD) [24]. It further mentions dyslipidemia as major risk factor for ASCVD. Increasing evidence points towards insulin resistance lead to hypertriglyceridemia and increased low-density lipoprotein (LDL) and decrease in high-density lipoprotein (HDL), as also an important risk factor for developing ASCVD and peripheral artery disease. According to our study, high HbA1c (cut-off of 9%) increased the risk of hypertriglyceridemia by 2.69 (OR=1.71-4.23, p <0.001). In other words, poor glycemic control would increase the risk of hypertriglyceridemia by 2.69% on average. This suggests an increased risk of atherogenicity due to dyslipidemia associated with poor diabetes control [25].

The main purpose of this study was to increase the awareness among physician about the relationship between hypertriglyceridemia and increasing HbA1c in type 2 diabetes so that physicians should be vigilant in monitoring fasting triglyceride levels every six months in type 2 diabetic patients with increased HbA1c levels. According to AACE and American College of Endocrine (ACE) Board, 10-year risk for ASCVD is high in patients with both diabetes and hyperlipidemia. It is recommended that fitness therapy should be advised for diabetes patients that are exercise programs that include 30 minutes of moderate-intensity physical activity (consuming four-seven kcal/minute), four to six times weekly with an expenditure of at least 200 kcal [23]. Lifestyle modification and regular exercise along with statin and fenofibrate play a vital role in treating diabetic dyslipidemia [24].

Diabetes Mellitus: An Unrecognized Complication in the Management of Patient ...