This study was conducted to evaluate late toxicities in adolescent and young adult (AYA) patients who received photon or proton therapy.

A total of 106 AYA patients who received proton and photon therapy and were followed-up for more than two years were retrospectively evaluated. The median age of patients was 22 years (range, 15-29 years). A total of 47 patients were male and 59 were female. A total of 35 and 71 patients received photon and proton therapy, respectively. All but one patient received radiotherapy with curative intent. The target disease was benign and malignant in 28 and 78 patients, respectively.

The median follow-up period in all patients was 62 months (range: 24-293 months). Grade 3 or higher toxicity was observed in 20 patients. There was one case of grade 5 toxicity (myelodysplastic syndrome), which was probably due to chemotherapy. No other secondary cancers were observed. Regarding life events, 15 and 88 patients were married and unmarried at the start of radiotherapy, respectively. Of the 88 unmarried patients, five were married after radiotherapy. Occupation and education were evaluated in 71 patients. Of the 71 patients, 33 were students, 21 were employed, and 16 were unemployed. Of the 33 students, eight were employed and 11 were at a higher educational grade after radiotherapy. Of the 21 employed patients, 17 had the same jobs and four had lost their jobs after radiotherapy. For the 16 unemployed patients, all remained unemployed.

This study is one of the largest studies to focus on life after radiation therapy among AYAs and suggests that cancer treatment has an influence on life events.

The definition of adolescent and young adults (AYAs) is different among countries [1]. In the United States, AYAs are patients aged between 15 and 39 years at cancer diagnosis, and in the United Kingdom, AYAs include patients aged between 13 and 24 years. However, a clear definition has not yet been established in other countries. For patients in these age groups, there is a gap in oncology services between pediatric and adult patients. Both rare and common malignancies are observed in AYAs. However, malignancies common among adults are not common in AYAs. Therefore, there are fewer studies providing information about malignancies in AYAs. For example, there is no clear consensus on whether AYAs with Hodgkin’s lymphoma should be treated with a pediatric or adult trial regimen; therefore, in 2018, the Children’s Oncology Group compared clinical trials and suggested that the treatment outcomes for AYAs are better in pediatric trials than adult trials [2].

In addition, late toxicities are a challenge for AYAs in association with improvement of treatment results. However, life stages rapidly change in the AYA age groups, and these patients face different psychosocial, emotional, and physical issues than pediatric and adult patients [3]. Therefore, we consider that adequate support is necessary for each personal situation.

In this study, we focused on life events, as well as late toxicities, in AYA patients who received photon and proton radiotherapy in two institutions in Japan.

A total of 106 AYA patients who received proton and photon therapy at two institutions in Japan were retrospectively analyzed. Photon and proton therapy were performed at separate institutes. Patients who received radiotherapy, were between 15 and 29 years of age, and were followed up for more than two years were enrolled in this study [4]. This study was approved by the institutional review board (Tsukuba Clinical Research & Development Organization; R01-144). Patient characteristics are shown in Table 1.

Table 2: Details of the diseases.

The primary endpoint of this study was late toxicities, and the secondary endpoint was life events, including marriage, giving birth, and employment or education status. Toxicities were graded according to the Common Terminology Criteria for Adverse Events version 4.0 [5].

The median follow-up period in all patients was 62 months (range: 24.0-293.6 months) and 68 months for survivors. Late toxicities were observed in 45 patients. Details of the toxicities are shown in Table 4. Grade 3 or higher toxicity was observed in 20 patients. Grade 3 toxicity was seen in 17 patients, of which endocrine disorders occurred in eight patients who subsequently received hormonal replacement therapy. Other cases of grade 3 toxicity included gastrointestinal ulcer (n = 1), skin ulcer (n = 1), brain necrosis (n = 1), brainstem infarction (n = 1), low vision (n = 2), cataract (n = 2), and ileus (n = 1). Grade 4 toxicity was observed in two patients. A patient with moyamoya disease received total body irradiation at a dose of 12 Gy in four fractions for nasal natural killer (NK)/T-cell lymphoma when she was 29 years old. Facial bone deformity occurred in a patient who received photon therapy for nasal NK/T-cell lymphoma at a dose of 50 Gy in 25 fractions when he was 22 years old. Grade 5 toxicity in the form of myelodysplastic syndrome occurred in a patient who received proton therapy for Ewing sarcoma (local irradiation of 55.8 Gy (RBE) in 31 fractions) when she was 15 years old. Secondary cancer was not observed outside of the one case of myelodysplastic syndrome. Depression was observed in two patients.

Occupation and education were evaluated in 71 patients who received PBT. Of the 71 patients, 33 were students, 21 were employed, and 16 were unemployed at the start of radiotherapy. Occupational information was unknown for the remaining two patients. Of the 33 student patients, eight (24%) were employed, 11 (33%) were at a higher grade of education at the last follow-up, and 14 had unknown educational status. Of the 21 employed patients, 17 (81%) were still in the same jobs at the last follow-up, but four had lost their jobs. Of the 16 unemployed patients, all were still unemployed at the final follow-up (Figure 1). 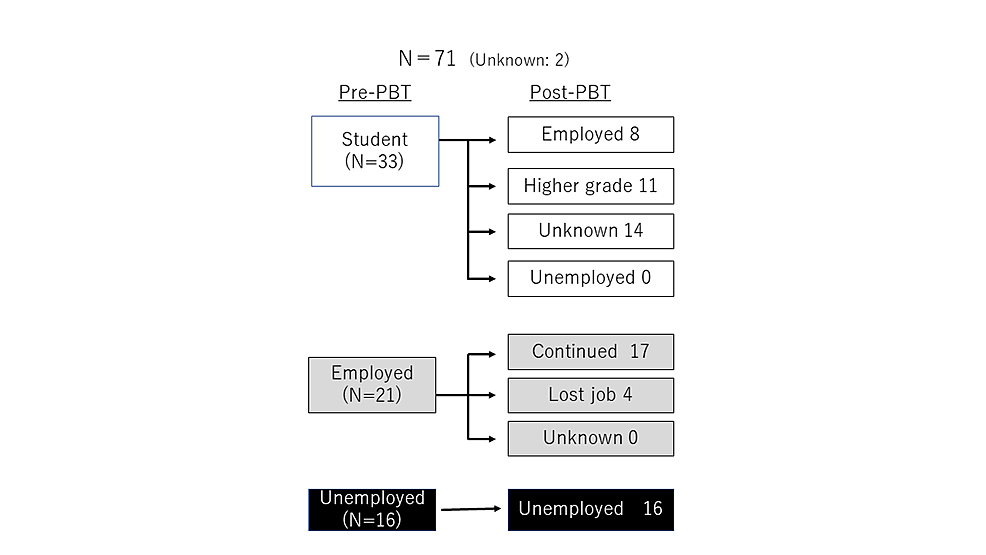 In Japan, cancer morbidity is increasing in those over 45 years old [6] and cancer mortality rate is increasing in those over 55 years old [7]. Hence, AYAs are rare among patients with common cancers. Furthermore, life stages rapidly change in the AYA generation and differ from those in other generations. Adolescents are in a stage of mental and social development and have not started working yet or have not become economically independent. Young adults start to become independent and start working. Therefore, the treatment effects of the same radiotherapy regimen may differ based on their circumstances. Naturally, AYA cancer survivors experience cancer-related distress [8-13], such as fear of cancer recurrence. Additionally, many factors influencing this distress have been suggested, including multimodal treatment, history of psychological distress [10], employment, type of cancer [9], age [11], and gender [8]. Wang et al. evaluated cancer-related worry in 15-26-year olds using the six-item Cancer Worry Scale [8]. They concluded that female survivors and higher treatment intensity were associated with increased cancer worry regarding infertility and/or secondary cancer. Mattoson et al. also reported that 85% of the patients, suffering from gynecological cancer at 19-39 years, were suffering from cancer-related distress, including fear of cancer recurrence (61%), anxiety (53%), depression (51%), fear of death (32%), concerns regarding sexuality (34%), fertility (27%), and change in body image (27%) [10]. Shay et al. showed that the rate of fear of recurrence was significantly higher among AYA survivors than among those diagnosed at an older age [9]. Beattie et al. also showed that younger age was associated with higher fear of recurrence among breast cancer patients [11]. In our hospital, we performed follow-up for pediatric patients with a radiation oncologist, pediatrician, and/or surgeon to respond to various changes. Similar to dealing with pediatric patients, follow-up by multiple experts (radiation oncologist, clinical psychologist, social worker, gynecologist, etc.) may be needed for AYA cancer survivors to reduce cancer-related events.

The Children’s Oncology Group recommends that patients receiving radiotherapy to the head and neck undergo dental examination and cleaning every six months because of the risk of dental decay [14]. Hamilton et al. reported late effects in AYA head and neck cancer survivors who survived for more than five years after diagnosis. In this study, 78% of the survivors had at least one late toxicity from radiotherapy, including chronic skin changes, osteonecrosis, and hearing loss. Additionally, a second malignancy was observed in 17% of the patients. Lim et al. reported the results of treatment of 176 AYAs with brain and skull base tumors at the Paul Scherrer Institute [15]. PBT is expected to have a lower rate of toxicities due to its favorable dose distribution, and severe (greater than grade 3) ototoxicity and neurotoxicity were observed in 3.4% and 2.9% of the patients, respectively. However, the rate of unemployment was 9.5% pre-PBT, increasing up to 23.8% post-PBT. Adverse events caused by PBT and having to take time for surgery and PBT affected employment.

The main limitations of this study are its retrospective design and the short follow-up period.

This is one of the largest studies focusing on life after radiation therapy, suggesting that cancer treatment may impact life events. More detailed data collected over a longer period of time are necessary to clarify the effect of radiotherapy on the future lives for AYAs.

© Copyright 2021
Mizumoto et al. This is an open access article distributed under the terms of the Creative Commons Attribution License CC-BY 4.0., which permits unrestricted use, distribution, and reproduction in any medium, provided the original author and source are credited.

Table 2: Details of the diseases.