Informed consent was obtained by the patient for treatment.

Her plain x-rays revealed an anterior elbow dislocation and distal radius fracture with intra-articular extension. There was an associated displaced fracture of the lateral epicondyle (Figure 1). 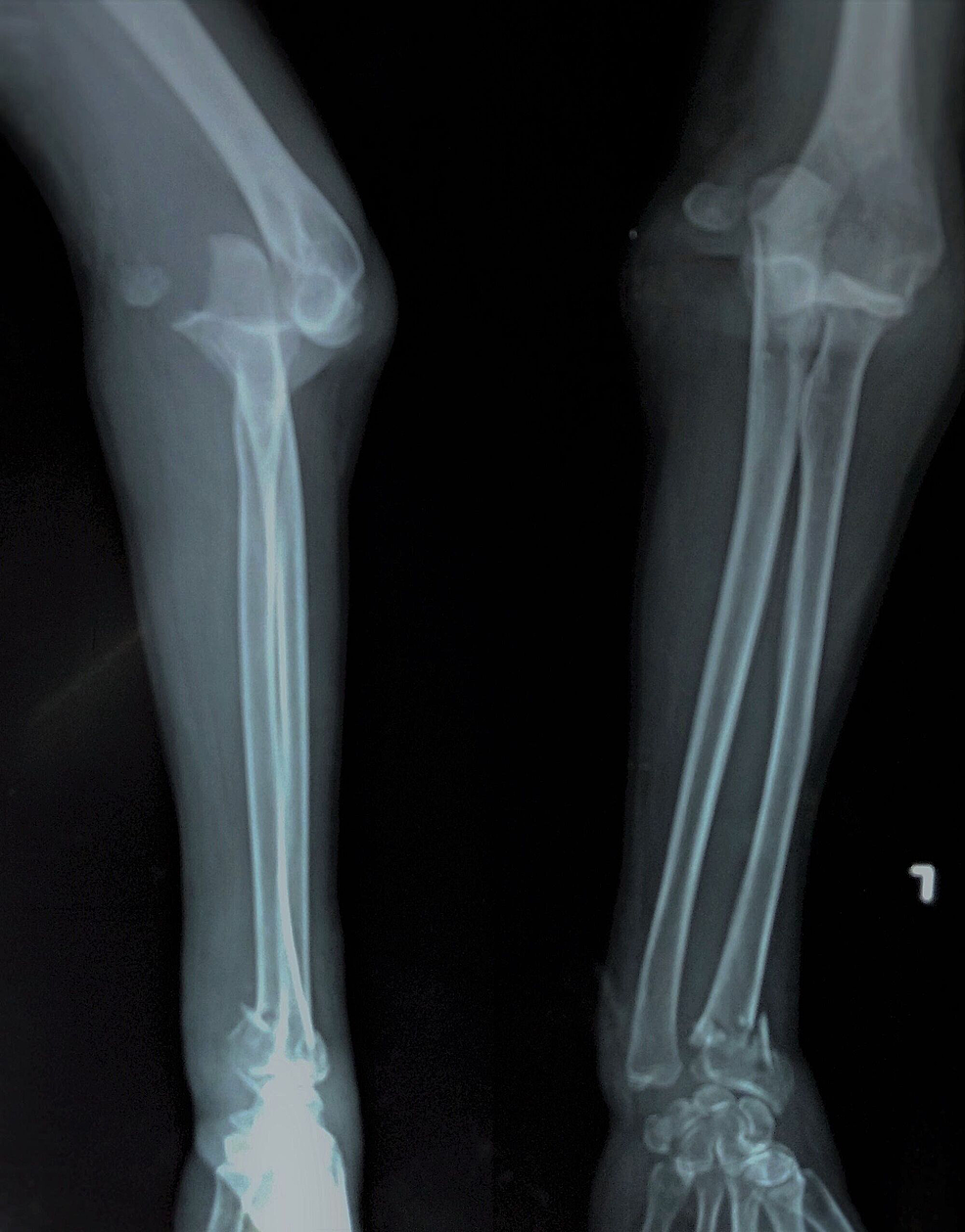 Figure 1: Anterior elbow dislocation along with the lateral epicondyle fracture.

The elbow joint was reduced under general anesthesia. A distal traction was given at the forearm. Since there was a fracture at the distal end of the radius as well, the traction could not be applied at the wrist. The traction was thus applied to the proximal forearm, and a posteriorly directed force was applied while the elbow was hyperflexed. Care was taken not to hyperextend the elbow joint as it could have put the anterior neurovascular bundle at a stretch. The elbow joint was unstable post reduction and, hence, was fixed with two ulnohumeral pins.

The displaced lateral epicondyle fracture was accessed through the lateral approach to the elbow and fixed with a partially threaded cannulated cancellous screw with a washer (Figure 2). 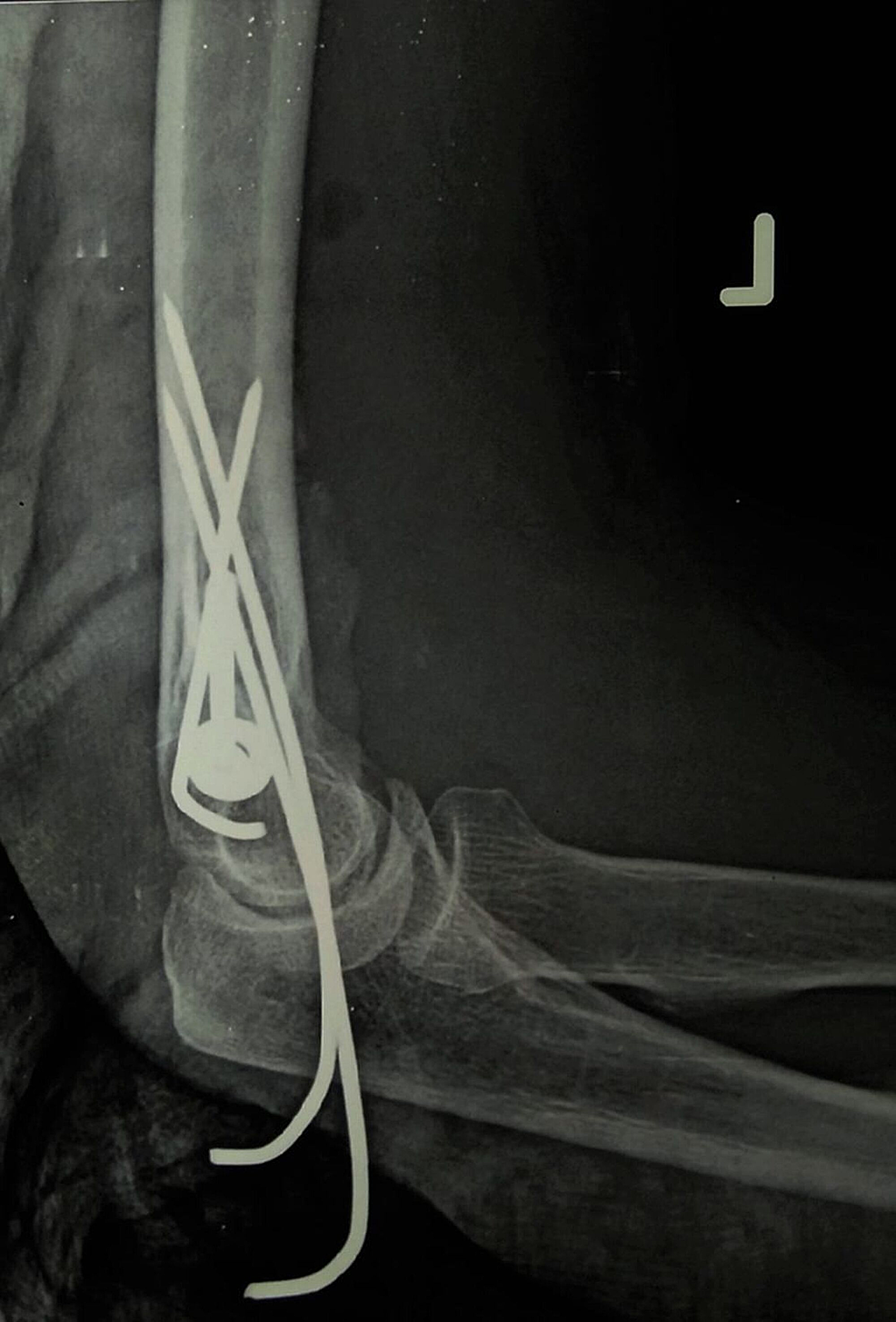 Figure 2: Fixation of the elbow done with two ulnohumeral pins and a partially threaded cannulated cancellous screw with a washer.

The distal radius fracture was then reduced and pinned using five percutaneous K-wires. Two 1.5 mm K-wires were inserted from distal to proximal, and another pin was passed through the radial styloid. Two K-wires were added from the ulnar side to the radial side for prevention of supination and pronation (Figure 3). 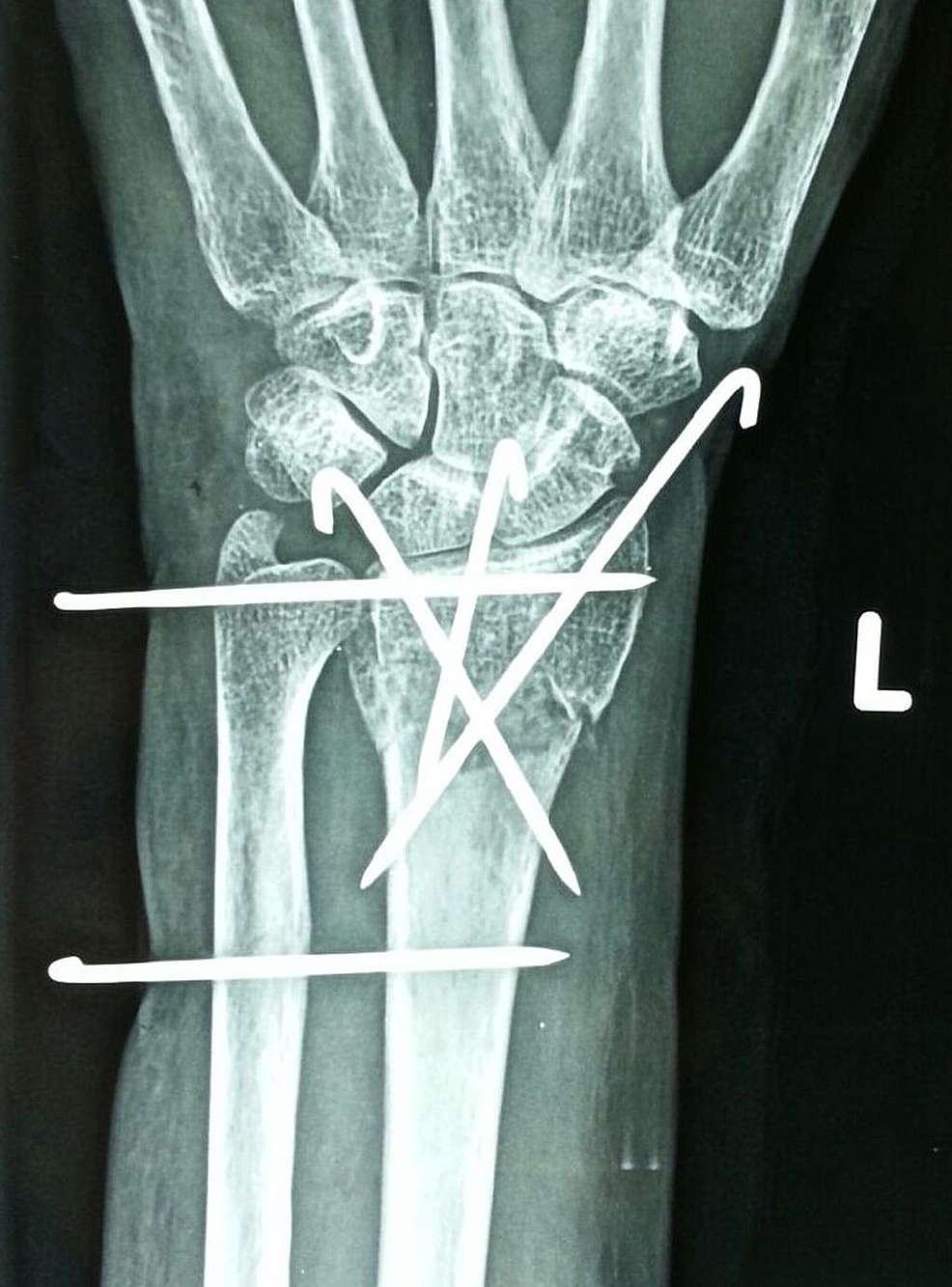 An above-elbow cast was applied for two weeks. Following this, the ulnohumeral pins along with the slab were removed, and a wrist brace was given. The patient was reviewed weekly for her pin site dressings, and elbow mobilization was encouraged. The wrist splint was then removed after four more weeks, and active elbow and wrist movements were started six weeks after trauma. At the three-month follow-up, the lateral epicondyle fracture had united, and the patient had regained flexion range of motion of zero degrees to 130 degrees at the elbow (Figure 4). 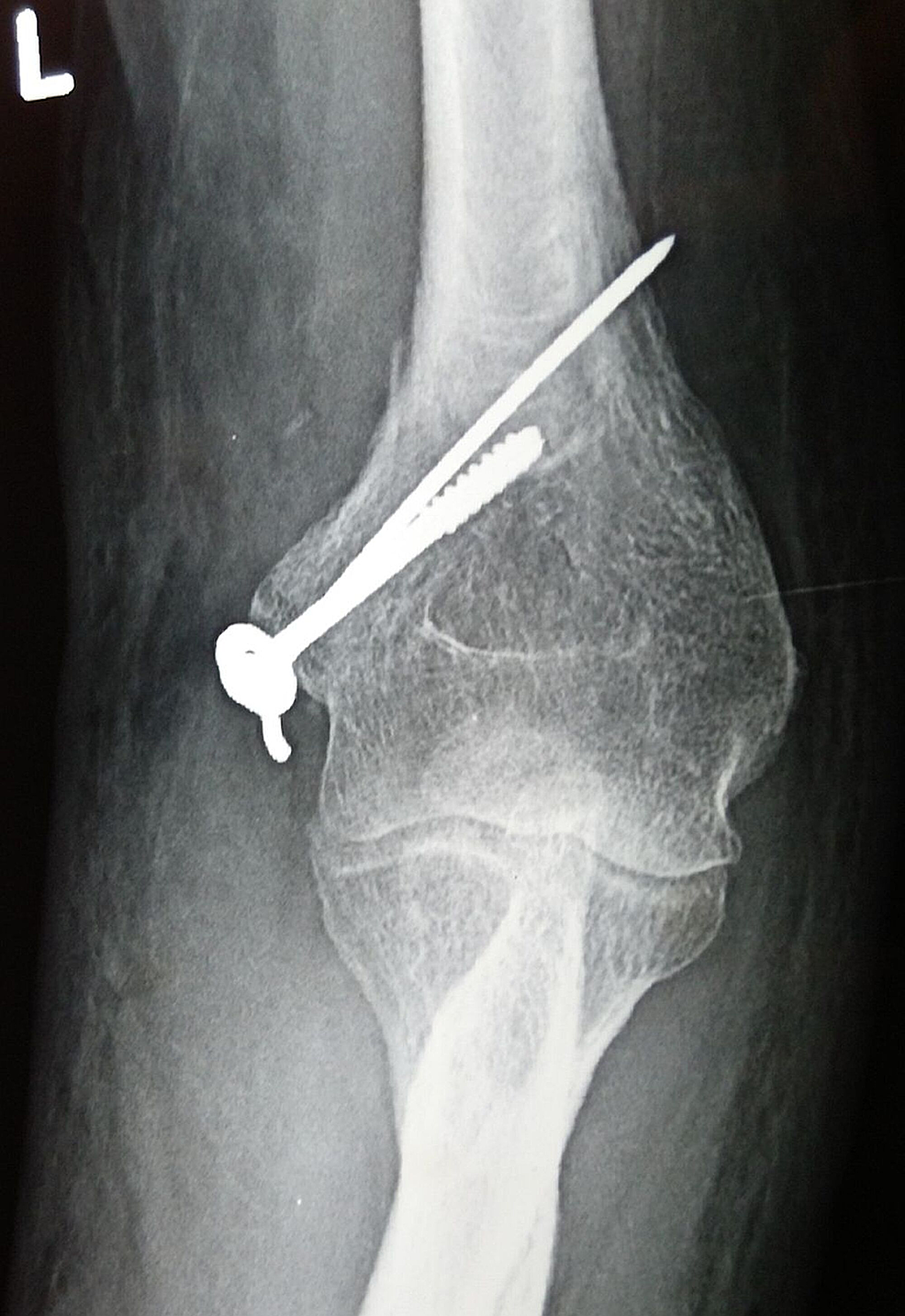 Figure 4: Anteroposterior radiograph of the elbow showing a reduced elbow joint with the screw and K-wire in situ.

The wrist had dorsiflexion of 70 degrees, palmar flexion of 40 degrees, and supination restriction of 10 degrees as compared to the normal side. At the final follow-up of one year, the patient was asymptomatic with both fractures united and a congruent elbow joint. The distal end radius fracture had malunited but was asymptomatic (Figure 5.) 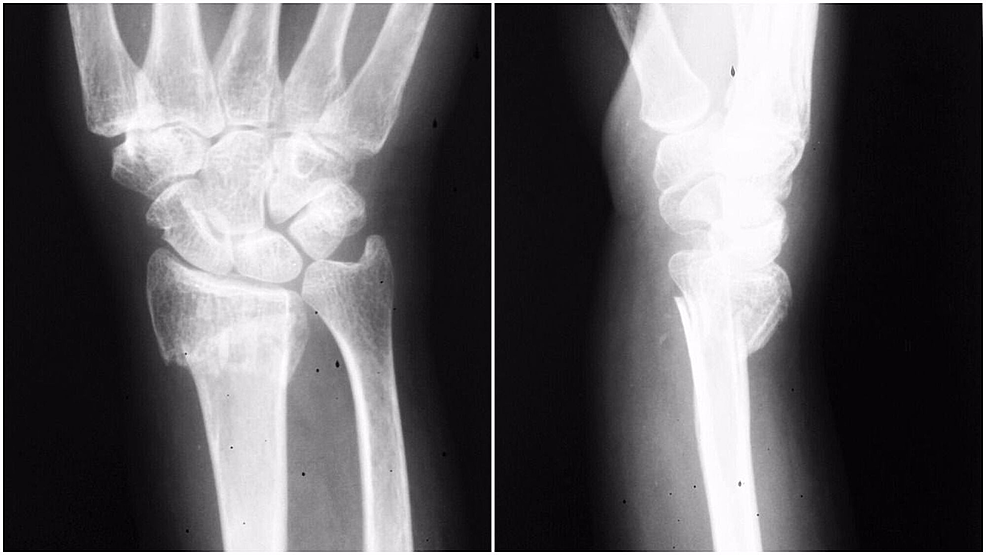 The elbow joint is a stable joint of the hinged variety. Radial head, coronoid process, and olecranon fractures are most commonly associated with elbow dislocations [2]. Fracture of the radial head and coronoid process along with posterior dislocation is called the "terrible triad" [1]. Radial head fracture along with an ulnar diaphyseal fracture has been described as Monteggia fracture dislocation [5]. Elbow dislocations with ipsilateral radial and ulnar diaphyseal fractures have also been reported in the literature [6].There have also been reported cases of Galeazzi-variant type fracture dislocation injury in adults [7].

We would like to propose two mechanisms of injury for dislocation of the elbow with an ipsilateral distal radius fracture. The first mechanism would be a single-impact theory of a fall from height resulting in compressive forces that, when directed on the outstretched hand, fracture the distal end of the radius first. Since the energy is enormous, it travels to the hyperextended and valgus elbow, resulting in dislocation of the elbow posteriorly. Since the force fractures the radial column, the remaining force is only transmitted along the ulna, thus pushing the ulnar groove out of the trochlea and, hence, causing posterior dislocation. The second mechanism for the above injury pattern would be a double-impact theory as seen in road traffic injury patients. In this arrangement, the subject undergoes a fall on the outstretched hand resulting in the distal radius fracture, followed by a direct injury to the elbow resulting in the posterior elbow dislocation (Figure 6). 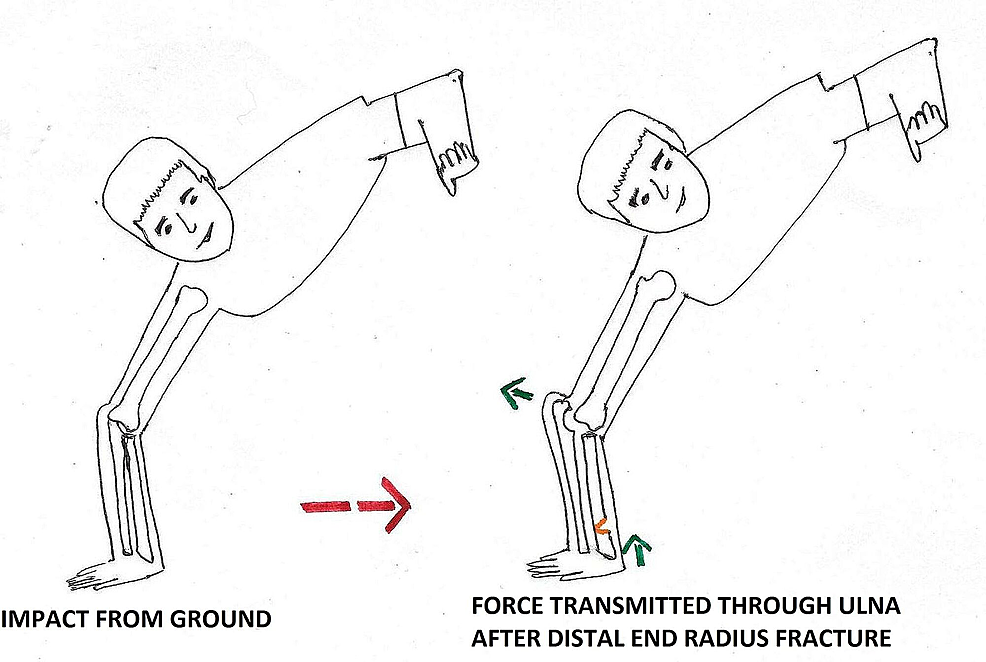 We believe that the most probable mechanism of injury of the anterior dislocation with an ipsilateral distal radius fracture would be a double-impact theory of a fall on the outstretched hand from height causing the distal radius to fracture while landing on the ground, followed by a direct posterior blow to a flexed elbow (Figure 7).

Elbow dislocation can be reduced under sedation, but in our case, the reduction was found to be unstable and, hence, post reduction ulnohumeral pinning had to be done. Following this, with the elbow in 90 degrees of flexion, the distal radius was reduced, and pinning of the distal radius fracture was done. In this case, even though the fracture was also amenable to plate osteosynthesis, closed reduction and pinning were done due to financial constraints. The distal end radius fracture malunited, but the malunion was asymptomatic until the last follow-up.

The purpose of this study is to report that there is a chance of double site, closed type of fracture in the forearm in cases of a fall from height. A thorough investigation of these injuries should be done as these can be easily missed. The radiographs of an elbow injury case should always include that of the wrist and vice versa.

© Copyright 2016
Vaishya et al. This is an open access article distributed under the terms of the Creative Commons Attribution License CC-BY 3.0., which permits unrestricted use, distribution, and reproduction in any medium, provided the original author and source are credited.

Figure 1: Anterior elbow dislocation along with the lateral epicondyle fracture.

Figure 2: Fixation of the elbow done with two ulnohumeral pins and a partially threaded cannulated cancellous screw with a washer.

Figure 4: Anteroposterior radiograph of the elbow showing a reduced elbow joint with the screw and K-wire in situ.