Published via the California Institute of Behavioral Neurosciences & Psychology Channel.

Non-small cell lung carcinomas (NSCLC) account for a major part of all lung cancer diagnoses. The current literature review is aimed to analyze the varied chemotherapeutic treatment regimens available and to provide a standard for their use in the present and future scenarios. The current literature review focuses on platinum, non-platinum and combination therapeutic modalities, in the first and second line setting. The review also ensures that docetaxel and/or gemcitabine is a part of the study. A PubMed search for NSCLC identified 70,077 articles. A total of 36 research articles were obtained following the application of keywords and inclusion/exclusion criteria to narrow down our search to meet with the research objective. These articles consider NSCLC and chemotherapeutic treatment modalities as its primary endpoint. These 36 articles included 15 randomized clinical trials, five randomized control trials, five retrospective cohort studies, one case-control study, six review articles and four observational studies. Our analysis shows that there is an increasing potential for the use of non-platinum based drugs in the clinical setting with an efficacy that is at par with that of platinum-based treatment modalities. In fact, the studies have proven a greater advantage with the use of combination therapy (non-platinum + platinum), which can be readily applied as an alternative in the clinical setting while the use of non-platinum drugs (other than docetaxel) as a monotherapy or in combination with other non-platinum based drugs does require further research.

Non-small cell lung carcinomas (NSCLC) account for about 80-85% of all lung cancer diagnoses [1]. The main sub-types are adenocarcinoma, squamous cell carcinoma and large cell carcinomas. These carcinomas arise from different types of lung cells but are grouped together as NSCLC. This is because they share a similar prognosis and treatment [2]. Most stage one and stage two NSCLC are treated by surgical resection of the tumor followed by chemotherapeutic regimens [3]. However, the initial signs are often ignored and most patients present with advanced-stage NSCLC, which are non-operable at the time of diagnosis. Although the incidence of mortality is high, especially in the case of advanced NSCLC, chemotherapeutic drugs have proved effective in increasing the overall survival (OS) rate [1]. An improvement in the median survival time (MST) by about one and a half to three months can be observed in such individuals [4]. The conventional treatment regimens involve platinum-based chemotherapy. European guidelines recommend a cisplatin-based therapy while American guidelines largely advocate for a platinum-based doublet [5]. Cisplatin is preferred to carboplatin because of better effect on survival as compared to other platinum-based regimens [5]. The last one to two decades saw the advent of non-platinum based regimens involving drugs like docetaxel and gemcitabine into the market which were seen as potential alternatives for the traditional platinum-based therapy. At present, non-platinum based regimens are administered only if platinum-based regimens are contraindicated. Docetaxel is seen as the gold-standard for second-line treatment [5] while gemcitabine is slowly accepted as a first-line drug when given in combination with cisplatin [6]. While platinum-based therapy is associated with an increased risk of toxicity, it is imperative to come up with newer treatment regimens that can replace or reduce this risk of toxicity while proving to be equally efficient in terms of overall survival.

In the presented literature review, the drugs used under the European and American guidelines (carboplatin and cisplatin) will be considered under platinum-based regimens. To narrow down our study, all non-platinum based regimens will be considered, with inclusion criteria such that docetaxel and gemcitabine are a part of the research study. Docetaxel and gemcitabine are the most commonly used drugs as a part of the non-platinum treatment regimen. Our aim is to compare the efficiency and uses of platinum-based, non-platinum based, and combination therapy in the treatment of NSCLC. The current literature review hopes to provide greater insight into the available combinations while also giving a standard to compare and administer the appropriate first- and second-line treatments for NSCLC.

Literature was searched in the PubMed database. Parallel strategies on ‘regular keywords’ and ‘Medical Subject Heading (MeSH) subheadings’ were used for data collection. No other database was taken into consideration. Table 1 below further illustrates the above methodology.

The articles collected from PubMed search results were filtered as per the criteria below:

Only English language articles with full-text availability were considered. All of these articles were published in Medline journals and were of the following study types: observational studies, cohort studies, case-control studies, review articles, and clinical trials including randomized clinical trials. These studies/review articles were based on first- and second-line chemotherapeutic regimens and involved platinum/non-platinum based therapies like docetaxel and gemcitabine. These studies were based on an adult population (age 19+) as a reference point.

Non-English language literature and those studies that have not been published in Medline were not considered as a part of the review. All studies conducted in the laboratory on an animal model and the study types involving meta-analysis, case reports and case-series studies have been excluded. Studies/trials conducted on pediatric age groups and on individuals with two or more chemotherapeutic drug therapies were further excluded from the review.

Table 2 shows the total number of literatures following the application of each inclusion/exclusion criteria to regular and MeSH keywords.

A Brief Analysis of Results

The statements used in this article have been cited from the corresponding journals and the references are available. The available articles following inclusion/exclusion criteria have also been subjected to a qualitative review so as to ensure that the relevant disease, the chemotherapeutic treatment regimens, population and the outcome can be studied. A summary of the methods and results is given in Figure 1 below. 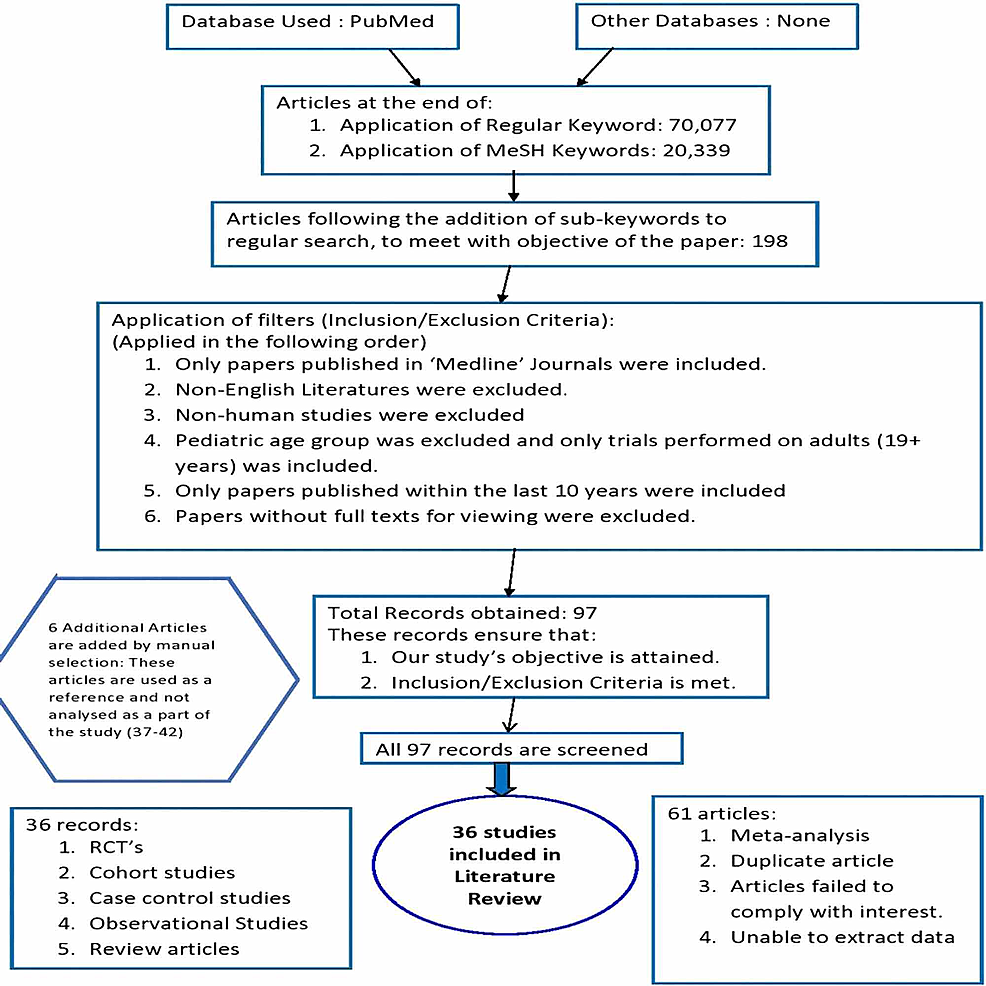 The analysis mainly recognizes the use of non-platinum treatment regimens like docetaxel and gemcitabine or at the least, to incorporate them along with traditional platinum-based modalities of treatment. Platinum-based modalities are associated with an increased risk of toxicity which is imperative to study the use of non-platinum based regimens to eradicate or decrease the toxicities with long term administration. In this article, the efficacy of these regimens as first-line and second-line drugs have been evaluated. A good mean survival time (MST) is seen in both the first- and second-line setting with the use of these regimens. Some of the studies that describe the efficacy of non-platinum-based and combination therapy as first-line treatment regimens are described in Table 3.

Docetaxel and gemcitabine show up to two years survival rates in patients with advanced NSCLC [38] and an MST of up to 11.3 months in the studies evaluated [23]. These statistical evidences provide encouragement towards the use of non-platinum modalities in the treatment of NSCLC, especially advanced NSCLC. Some of the studies that describe the efficacy of non-platinum-based and combination therapy as second-line treatment regimens are described in Table 4.

The MST of docetaxel and gemcitabine are 21 and 22 months, respectively, when used as monotherapies [21]. Docetaxel, though considered to be a gold-standard for the second-line treatment of NSCLC, gemcitabine shows equal potential that can be studied further as an alternative to docetaxel.

Limitations of the Review Article

Despite the analysis of efficacy between therapeutic regimens, individual drugs within the non-platinum therapeutic schemes weren’t analyzed separately. The standard drugs, docetaxel and gemcitabine, were used to drive the research forward with little emphasis over the other non-platinum based drugs and their efficacies. An equal number of studies involving different stages of NSCLC and the efficacy of these drugs in each of those stages were impossible to extract with a vast majority of studies leaning towards advanced stage NSCLC’s, possibly owing to the lack of diagnosis at the early stages with this disease. Every study was unique in its manner of administration of the same drug, with differences in the dosage/cycles/period of treatment with that specific drug. The accurate dosage or the changes in efficacy and responses with the dosage could not be evaluated in this study. Nevertheless, we have tried to obtain a standard to consider and re-evaluate the uses of newer drug combinations with varied efficacies.

On the basis of the study results, we can conclude that the current literature review aligns with our research objective to compare the efficiency and the uses of platinum and non-platinum treatment regimens. We can thus conclude that there is an increasing potential for the use of non-platinum based drugs in the clinical setting with an efficacy that is at par with that of platinum based treatment modalities. In fact, the studies have proven a greater advantage with the use of combination therapy (non-platinum + platinum), which can be readily applied as an alternative in the clinical setting. However, as for the use of other non-platinum drugs as a monotherapy or along with other non-platinum drugs, other than that of docetaxel (used in second-line therapy), does require further research over its efficacy and advantages over conventional treatment modalities.

© Copyright 2020
Michael et al. This is an open access article distributed under the terms of the Creative Commons Attribution License CC-BY 4.0., which permits unrestricted use, distribution, and reproduction in any medium, provided the original author and source are credited.