Modern-day studies that assess temporal trends in cardiovascular and cerebrovascular events (CCE) and outcomes among the young population in the United States (US) with depression remain limited.

A total of 3,575,275 patients out of 63,020,008 hospitalized young adults had comorbid depression (5.7%; median 31 years, 71.3% females). The depressed cohort more often comprised of older, white, male, and non-electively admitted patients. Higher rates of comorbidities, all-cause mortality, PCI, arrhythmia, VTE, and stroke were observed among the depressed cohort. The rising trend in all-cause mortality was observed among the depressed against a stable trend in the non-depressed. The prevalence of AMI remained stable among depressed with consistent upsurges in arrhythmia and stroke. Those with depression had extended hospital stay, higher hospitalization charges, and were more often transferred to other facilities or discharged against advice.

Rising trends of inpatient mortality, CCE, and higher resource utilization among young adults with depression are concerning and warrants a multidisciplinary approach to improve quality of life and outcomes.

Depression and cardiovascular disease (CVD) are known to be the leading causes of disability worldwide [1]. The association between depression and CVD has been established in previous studies and is found across the ages. Depression has been found to be an independent risk factor of mortality and re-hospitalization or reinfarction in patients with known CVD in prior etiological and longitudinal studies; however, contemporary large-scale data remains limited [2-5]. Biologically plausible mechanisms such as autonomic nervous system dysfunction, altered platelet receptor functioning, and pro-inflammatory cytokines, through which depression can influence the etiology and outcome in CVD, have been studied [6-8]. Depression can lead to non-compliance to medications and health-promoting behaviors like exercise and a healthy diet. The relationship of a sedentary lifestyle and lack of exercise among patients with mental health disorders and possible health consequences are well discussed in the literature [9-11]. Diagnostic challenges and under-treatment are highly concerning when depression presents as a comorbidity with cardiovascular conditions.

Clinical depression in young adults is associated with increased risk of CVD risk factors like uncontrolled blood pressure, smoking, alcohol consumption, and obesity, as well as a lower quality of life and an increased risk of coronary heart disease [12-17]. However, modern-day large-scale studies in the United States (US) that assess the relationship of depression in young adults with CVD and outcomes including mortality with an emphasis on shifting trends remain scarce. The current study, with its large nationally representative sample size, aims at comparing trends in the prevalence of CVD and in-hospital outcomes in young adults with and without depression from 2007 to 2014.

This study was carried out based on the inpatient data of the National Inpatient Sample (NIS) from the Agency for Healthcare Research and Quality-supported Healthcare Cost Utilization Project from 2007 to 2014 [18]. NIS consists of a 20% stratified sample of all nonfederal community hospitals in the US exclusive of acute and rehabilitation care facilities, and when weighted, it represents 95% of the US population. The NIS data outlines patients’ demographics, up to 25 diagnoses and 15 procedures, hospital characteristics, and comorbidities with relevant International Classification of Diseases Clinical Modification, 9th Revision (ICD-9 CM) codes [5,19]. The current study was exempt from the institutional review board approval owing to the publicly available and de-identified nature of the datasets.

SPSS Statistics v22 (IBM Corp., Armonk, New York) was used for all analyses. Continuous variables were described as mean or median as appropriate, and categorical variables as frequencies. Student’s t-test or Mann-Whitney nonparametric test were used to compare continuous variables, and Pearson chi-square was utilized to compare categorical variables. A linear-by-linear association test was used for trend analyses. All statistical tests were two-sided and a p-value of <0.05 was considered statistically significant.

Table 1: Baseline characteristics and comorbidities in hospitalizations among young adults (18-39 years) with vs. without depression 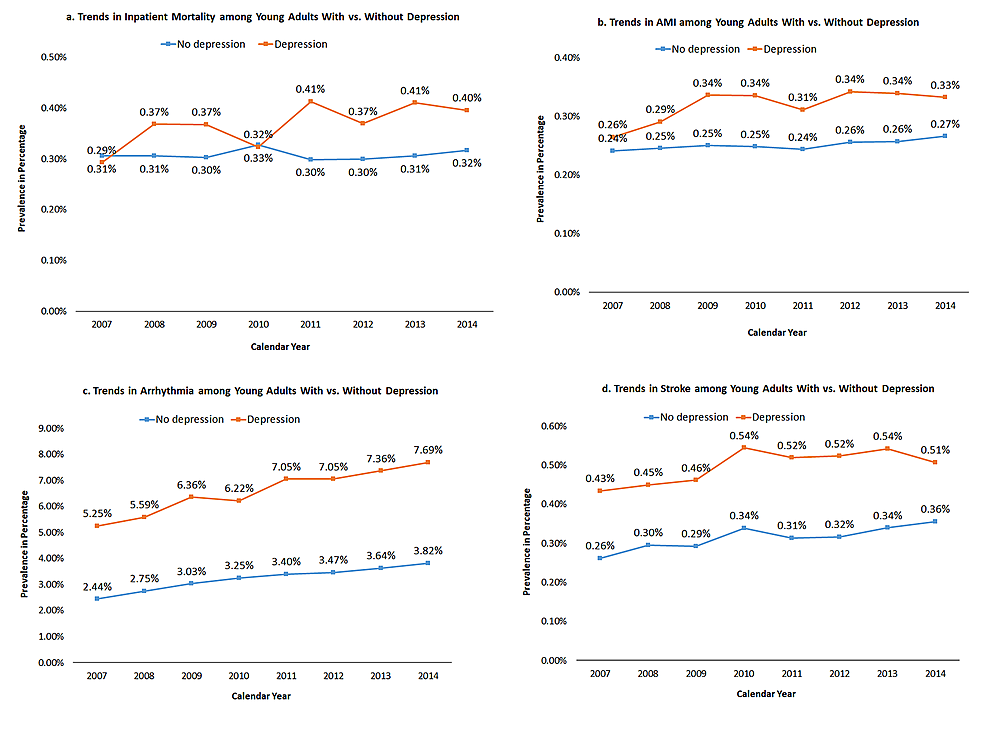 Figure 1: Trends in inpatient mortality, acute myocardial infarction, arrhythmia, and stroke among young adults with vs. without depression

On comparing the hospitalization outcomes in both the groups, the depressed group had significantly higher percentage of all-cause mortality (0.4% vs. 0.3%), PCI (0.2% vs. 0.1%), arrhythmia (6.6% vs. 3.2%), VTE (1.9% vs. 0.9%), and stroke (0.5% vs. 0.3%). When compared with the no-depression group, a higher percentage of patients in the depression group were either transferred to short-term hospital stays (1.9% vs. 1.0%) or other facilities (skilled nursing facility, intermediate care facility, 6.4% vs. 2.1%). A higher proportion of patients in the depression group left the hospital against medical advice compared to the non-depression group (2.8% vs.1.5%). The median LOS (days) (three vs. two days) and charges of hospitalization ($15,600 vs. $12,920) were higher in the cohort with depression (Figures 2e-2h). Comorbidities independently predicted extended LOS (>3 days) and higher hospitalization charges (>$15,600) in young adults hospitalized with depression (Table 2). 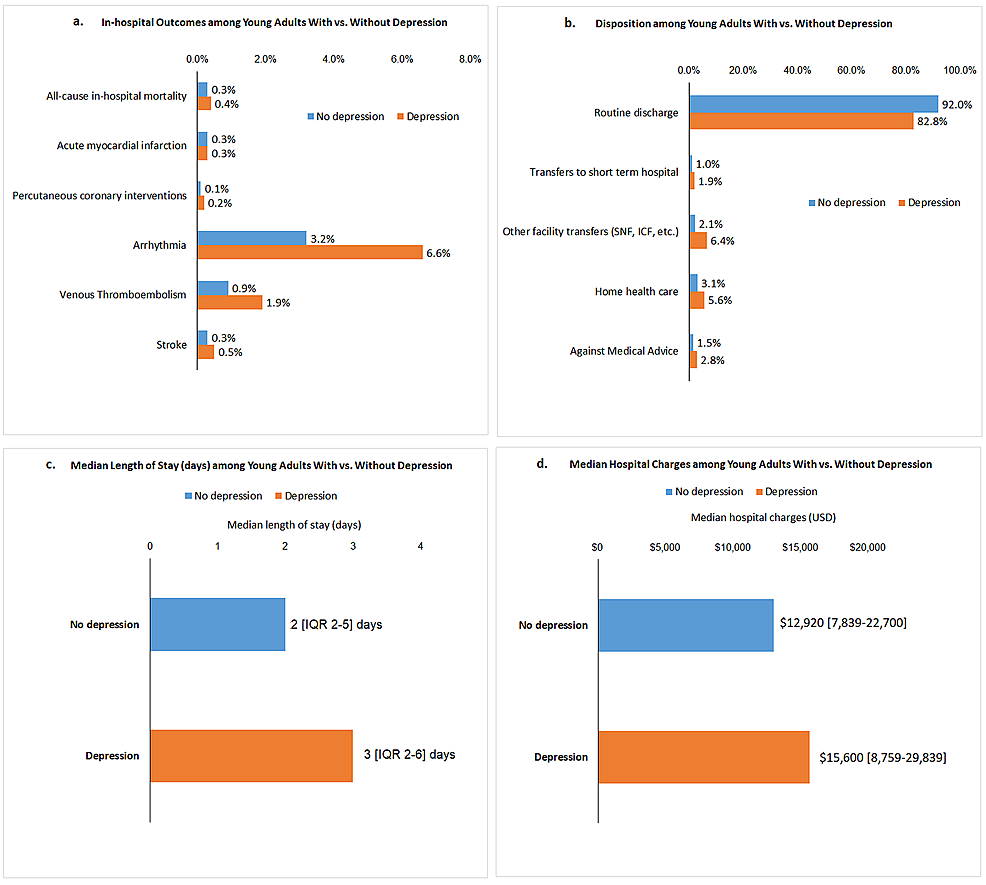 Figure 2: Inpatient outcomes, median length of stay (days), median hospital charges, and disposition among young adults with vs. without depression

Table 2: Predictors of prolonged length of stay (days) and higher hospital charges in hospitalizations among young adults with depression

Using a nationally representative cohort, this population-based study aimed at studying the trends in the frequency of CVD among depressed young adults (18-39 years) and understanding the differences between young adults with and without depression in terms of socio-demographics, hospital characteristic, and comorbid cardiovascular conditions. The current study shows the prevalence of depression to be around 5.7% among the inpatient population aged 18-39 years and the majority of the study population consisted of females (>70%). A population-based study of Danish young adults in 2018 showed that depressive symptoms were associated with many clinical and behavioral risk factors, with a stronger association observed among females [14]. Among the hospitalized, Caucasians tend to be more depressed compared to the other ethnic groups. This finding should be viewed against the fact that Caucasians constituted the majority of the entire study population and there is a likelihood of depression being underdiagnosed or underreported among other ethnicities [15]. Non-elective admission appears to be a risk factor for depression in hospitalized young. In view of higher mortality in depressed individuals, this finding brings to light the need for measures to address depression in patients who are admitted non-electively. Admissions in the Midwestern hospitals have shown the association of depression with CVD in the current study; however, further studies are needed to look more closely into this association. Various cardiovascular and metabolic conditions have been linked to depression and our finding supports the fact that this association holds good in a large-scale population and among young hospitalized individuals [22]. Increased risk of substance abuse and obesity can lead to worse cardiovascular outcomes in young adults with depression [14,16,17].

The current study reveals the association of depression with all-cause in-hospital mortality. This finding is in line with previous studies [23]. However, the existence of many intermediate variables that influence this association should not be undermined. A significant association between depression and arrhythmia, stroke, and VTE in the current study supports the existing evidence that depression acts at a risk for many cardiovascular conditions. Association of depression with smoking, alcohol, and substance abuse can also mediate the heightened risk for cardiac conditions in young adults [14,16,20,21].

There exists a significant association between depression and transfers to other facilities. Depressed patients also tend to have a longer hospital stay and higher hospitalization charges. Comorbidities played a significant role in predicting higher LOS and hospital charges in young adults hospitalized with depression. Many previous studies have reported a similar relationship across the ages. This finding further highlights depression as a strong predictor of poor outcomes and increased healthcare costs. This further stresses the need for therapeutic measures to address depression in order to achieve better overall outcomes in hospitalized patients.

We believe the large sample size of this study enhances the generalizability of our findings. However, a few possible limitations of the study include coding errors due to administrative data source, lack of data regarding the severity of depression, self-reported quality of life measures and long-term follow-up, and inability to establish a direct causal relationship between depression and cardiovascular events. Data regarding the history of child abuse and neglect, drug abuse, physical activity, prescribed medications, adherence to treatment plan, more recent life stressors, availability of mental health services, and outcomes related to treatment vs. lack of treatment of depression were not available.

Concisely, there was a constant rise in in-hospital mortality and cardiovascular events among depressed young adults across the study period. This could possibly be due to either a direct association of depression or increased comorbid risk factors. This observation further strengthens the need to address mental health issues in young, especially those with cardiovascular risk factors, through a multidisciplinary approach.

© Copyright 2020
Desai et al. This is an open access article distributed under the terms of the Creative Commons Attribution License CC-BY 4.0., which permits unrestricted use, distribution, and reproduction in any medium, provided the original author and source are credited.

Figure 1: Trends in inpatient mortality, acute myocardial infarction, arrhythmia, and stroke among young adults with vs. without depression

Figure 2: Inpatient outcomes, median length of stay (days), median hospital charges, and disposition among young adults with vs. without depression

Table 1: Baseline characteristics and comorbidities in hospitalizations among young adults (18-39 years) with vs. without depression

Table 2: Predictors of prolonged length of stay (days) and higher hospital charges in hospitalizations among young adults with depression