Background: Obstructive sleep apnea (OSA) is a source of significant morbidity in children. Polysomnography (PSG), the gold standard diagnostic tool for OSA, is often unavailable due to patient financial and geographic constraints. Our objective is to analyze the relationship between a patient's subjective complaints and the results from their PSG to determine the diagnostic value of the Pediatric Sleep Questionnaire (PSQ) for detecting OSA in children.

Obstructive sleep apnea (OSA) affects between 1.2% to 5.7% of children and adolescents in the United States and is associated with significant morbidity [1]. OSA is characterized by episodic upper airway collapse with concomitant apnea or hypopnea throughout sleep [2-3]. These episodic collapses of the upper airway result in hypercarbia and desaturation of oxyhemoglobin resulting in episodes of sleep arousal [2-3]. The etiology of OSA in children is complex and multifactorial with adenotonsillar hypertrophy being the most common cause of obstruction [2-3]. Other risk factors associated with children developing OSA include obesity, prematurity, African American ancestry, abnormalities of the maxillofacial skeleton, and neuromuscular disorders [4-6]. Pediatric patients with OSA are at an increased risk for the development of cardiovascular complications secondary to chronic hypertension [7]. From a psychosocial standpoint, children with OSA exhibit higher rates of poor academic performance, depression, and emotional lability when compared to the general population [8].

Presently, polysomnography (PSG) in an attended, overnight setting is the gold standard diagnostic tool for detecting OSA in pediatric patients [9]. Despite its efficacy, PSG has several shortcomings that limit its overall utility. While PSG is highly sensitive and specific for OSA in children and adolescents, it has limited effectiveness for the diagnosis of pediatric OSA due to its high associated cost, inconvenient nature, and lack of availability in underserved regions [10].

These limitations have prompted healthcare specialists to develop diagnostic tools that are affordable and readily available. Chervin et al. designed the pediatric sleep questionnaire (PSQ) to predict sleep-related breathing disorders (SRBD). The study performed by Chervin et al., however, did not examine whether SRBD could be identified during an initial evaluation for a patient with suspected OSA [11]. To our knowledge, this is the first study to investigate the PSQ’s efficacy in pediatric patients with suspected OSA. Our objective is to assess the PSQ’s efficacy as a diagnostic modality for pediatric OSA by comparing the results of the questionnaire to the results of patients’ sleep studies.

We performed a retrospective chart review of patients under the age of 18 years who were evaluated by a pediatric otolaryngologist for suspected OSA from March 2012 to January 2014 at the University of Texas Medical Branch at Galveston (UTMB). During evaluation, patients’ legal guardians were asked to fill out the PSQ if patients had the following symptoms: daytime fatigue, morning headaches, snoring, sudden awakenings with a sensation of choking or gasping, irritability, trouble concentrating, or difficulty awakening in the morning (Table 1). We utilized the scoring system developed by Chervin et al. to ensure the results of this study would be generalizable to healthcare providers using the PSQ [11]. Answer choices for questions included “yes,” “no,” or “Don’t Know.” The “Yes” answer choices were scored as one point, the “no” answer choices were scored as 0 points, and the “Don’t Know” answers were excluded from questionnaire scoring. If an answer choice was not selected or if an ambiguous write-in answer was recorded, the question was scored as “Don’t Know.” Questionnaires were scored as: Score = (number of “yes” answers)/(total questions answered either "yes" or "no"). Questionnaire scores > 33% were deemed “positive.”

The PSQ was available in both English and Spanish in order to prevent selection bias in our study. Patients with clinical suspicion for OSA underwent PSG at an UTMB or unaffiliated sleep center. PSG results, in the form of Apnea-Hypopnea Index (AHI) and Respiratory Disturbance Index (RDI) values, were used to determine if a patient had OSA. Patients with AHI and RDI values between 1 and 5 were classified as having mild OSA while patients with values between 5 and 10 were classified as having moderate OSA [12].

The sensitivity, specificity, positive predictive value (PPV), and negative predictive value (NPV) were calculated to assess the questionnaire’s ability to detect a pathologic result on PSG. Inter-rater reliability was calculated using Cohen’s kappa index (κ). PSQ and PSG results, clinic notes, lab results, and demographic information were gathered from the patient’s existing electronic medical records. No additional data was obtained from the patient directly. Patients were excluded from the study if either the sleep questionnaire or PSG were incomplete. Data including patient age upon questionnaire completion, answers to the questionnaire, questionnaire score, AHI score, and RDI score were recorded and subsequently analyzed in Microsoft Excel (Microsoft Inc., Redmond, WA, USA). This study was evaluated and approved by the UTMB Institutional Review Board.

A total of 161 patients were identified for inclusion in our study. Out of these patients, only 63 (39%) completed the PSQ and underwent PSG with 49 (30%) patients scoring above 33% on their sleep questionnaire.

Table 2: Diagnostic properties of the pediatric sleep questionnaire for the detection of pathologic polysomnography results.

While the PSQ demonstrates efficacy as a screening tool for the diagnosis of OSA in the pediatric population, it is not without weaknesses. The primary weakness of the PSQ is how its scoring system calculates incomplete or ambiguous responses on the questionnaire. Any responses that were either incomplete, marked as “Don’t Know,” or were unintelligible were excluded from the total question count [11]. This exclusion allows the remaining “yes” and “no” responses to skew the final questionnaire score. This weakness in the PSQ is exaggerated by the inclusion of the DSM-IV diagnostic criteria for Attention-Deficit/Hyperactivity Disorder (ADHD) [11]. Despite evidence that the symptomatology of ADHD and pediatric OSA are similar, and in some cases related, they are relatively non-specific symptoms of OSA in children when compared to symptoms such as apneic episodes during sleep [17,18]. Additionally, the inattentive and hyperactive symptoms of ADHD are more noticeable in day-to-day life rendering them more susceptible to recall bias. Taking these factors into account, it can be surmised that the PSQ score is more heavily influenced by non-specific symptoms rather than specific symptoms. To avoid unnecessary evaluation for false-positive results, patients should be evaluated for ADHD before taking the PSQ.

Our findings suggest that the PSQ, despite its limitations, has utility as a screening tool for OSA in children and adolescents [19-22]. Our proposed algorithm for the diagnosis of OSA is illustrated in Figure 1. We recommend that the PSQ be administered in a primary care setting to reduce the number of unnecessary referrals to pediatric otolaryngologists. This, in turn, may result in fewer patients undergoing PSG and potentially shorten waiting times for patients who require PSG. 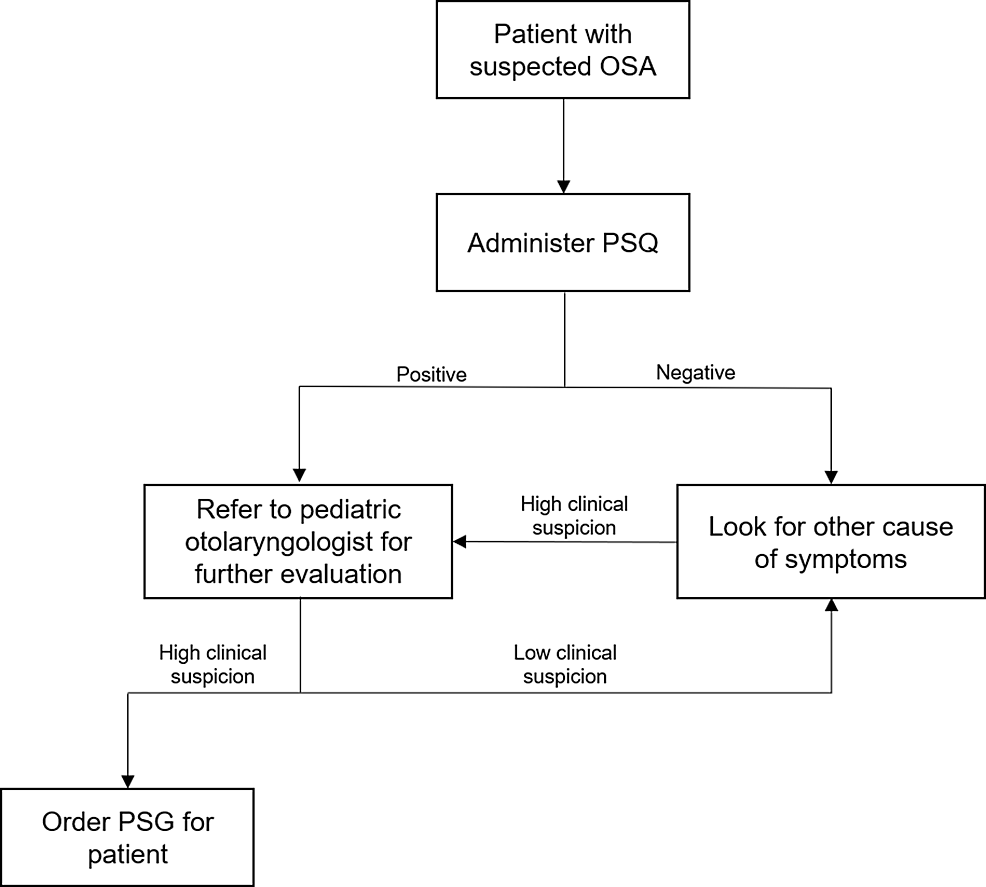 Our study has several limitations. First, the size of our study population increases the risk for skewing of results and type two error. Second, while all sleep centers measured patients’ AHI, several sleep centers did not measure patients’ RDI resulting in fewer data points. Third, there are no universally agreed upon AHI and RDI values for diagnosing or grading the severity of OSA in pediatric patients due to the significant anatomic heterogeneity exhibited across age groups [12,16]. Lastly, the results obtained from PSG have been demonstrated to lack consistency across sessions potentially limiting the quality of our data [23-27].

© Copyright 2020
Ferry et al. This is an open access article distributed under the terms of the Creative Commons Attribution License CC-BY 4.0., which permits unrestricted use, distribution, and reproduction in any medium, provided the original author and source are credited.

Table 2: Diagnostic properties of the pediatric sleep questionnaire for the detection of pathologic polysomnography results.