The incidence of synchronous primary endometrial and ovarian cancer is uncommon and poses a diagnostic challenge to the treating physician about their origin as either primary or metastasis. The purpose of this study was to evaluate the clinicopathological behavior, treatment modality-related outcomes, and prognosis related to primary endometrial and ovarian cancers at a tertiary care referral center in South Asia.

The median age of the patients at the time of diagnosis was 51 years (range: 25-72 years). The common presenting symptoms were irregular uterine bleeding (30%), post-menopausal bleeding (26.7%), abdominal mass (16.7%), and abdominal pain (26.7%). Endometrial adenocarcinoma type was the most common histological variant found among the participants: 90% (n=27) of uterine and 56.7% (n=17) of ovarian cancers. All patients underwent surgical intervention. Among them, 25 patients received platinum-based adjuvant chemotherapy, four received neoadjuvant chemotherapy, and 18 received adjuvant radiotherapy. The early-stage group [International Federation of Gynecology and Obstetrics (FIGO) stage I and II] had a more favorable prognosis than the advanced stage group (FIGO stages III and IV).

The study was granted approval by the Institutional Review Board (IRB) of Shaukat Khanum Memorial Cancer Hospital and Research Centre. Between 2005 and 2017, we retrieved data relating to 30 patients diagnosed histologically with synchronous endometrial and ovarian tumors from the Cancer Registry database. The diagnosis was established by an expert panel of pathologists at our institution.

Data that were analyzed included age, body mass index (BMI), parity, addiction, presenting complaints, comorbidities like diabetes mellitus (DM) and hypertension (HTN), family history of malignancy, and use of hormones. Details of pathological diagnosis, grading, type, size of the tumor, depth of involvement, lymphovascular and perineural invasion, and lymph node status were collected from histopathology reports. World Health Organization (WHO) committee classification was used for histologic determination, and staging of both ovary and endometrium was devised on the basis of the International Federation of Gynecology and Obstetrics (FIGO) guidelines and the American Joint Committee on Cancer (AJCC) staging manual 8th edition. All data were analyzed by using SPSS Statistics version 22.0 (IBM, Armonk, NY). A chi-squared test was applied to assess the association between the above-mentioned variables.

The study included 30 participants with the diagnosis of synchronous endometrial and ovarian cancer treated at Shaukat Khanum Memorial Cancer Hospital and Research Centre, Lahore, Pakistan. The mean age at the time of diagnosis was 51.63 ±11.9 years. Out of the 30 patients, 17 patients were post-menopausal, and half of the female patients were multiparous. The median BMI of the patients was 28.04 kg/m2 (range: 17-49 kg/m2). The most common presenting complaints were irregular uterine bleeding (30%) followed by post-menopausal bleeding (26.7%) and nonspecific abdominal pain (26.7%). The associated comorbidities included HTN (n=16) followed by DM (n=7) (Table 1). The characteristics features of endometrial and ovarian tumors are presented in Table 2. All of the patients underwent surgical resection; however, among them, 26 patients underwent upfront resection, while four patients were given induction chemotherapy prior to surgical resection. Endometrioid adenocarcinoma was the most common histology at both sites (Table 3). Surgical removal consisted of open (n=26) and laparoscopic (n=2) resections. Adjuvant treatment in the form of platinum-based chemotherapy was given for 25 patients either as concurrent chemotherapy (n=7) or combined chemo-radiotherapy (n=18). Categorical variables such as age, BMI, menopausal, and parity status did not significantly affect five-year survival (Table 4). At the final follow-up, 23 patients were found to be alive with no recurrence, while six had died due to tumor recurrence and metastasis. One patient was lost to follow-up. Figure 1 charts the overall five-year survival (75%). 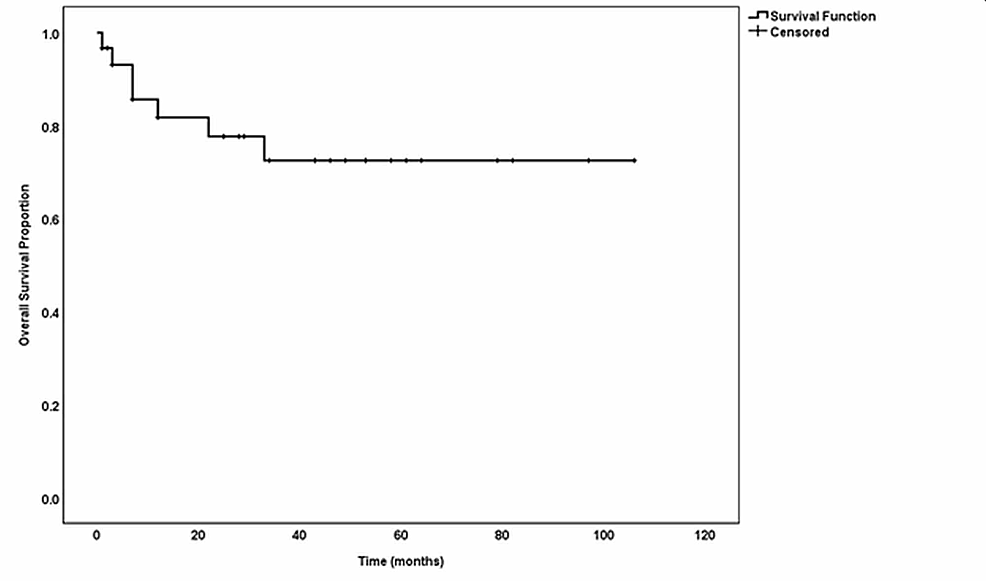 Synchronous endometrial and ovarian tumors are rare variants of gynecological cancers, and they must be differentiated from either primary endometrium or ovarian tumors with metastasis. The landmark criteria have been laid down by Ulbright and Roth, and later refined substantially by Scully et al. [4,5]. Obesity has resulted in changing trends of endometrial disease in the United States, resulting in a gradual increase in the incidence of the disease in the past few decades [10,11]. Menopausal hormonal therapy as well as the use of oral contraceptives have caused a steady fall in the incidence of ovarian cancer. Many theories have been proposed about these relative proportions of synchronous tumors, which include changing demographic trends and the introduction of diagnostic criteria in 1980, which was adopted by many centers in later years [12-14].

Obesity has been known as a risk factor for endometrial carcinoma although its association with ovarian tumors is not yet established. The risk to develop endometrial cancer increases by three-fold and nine-fold for women having a bodyweight of 9-22 kg and more than 22 kg above the normal limit, respectively [21]. The median BMI was 28.04 kg/m2 in our cohort. More than 75% of patients in our series had a BMI of >25 kg/m2, and this was consistent with an institutional review by Soliman et al. who have reported obesity in 60% of their patients [9].

Although nulliparity is related to ovarian cancers, Herrinton et al. have reported lower than normal mean parity in women with synchronous tumors as compared to those with either endometrial or ovarian tumor alone [20,22]. We observed nulliparous status in 33% of our patients. Eifel et al. have found an increased (50%) presentation of nulliparous status in the synchronous endometroid/endometroid variant of these tumors [6]. In our series, 45% of patients were nulliparous against the background of endometroid/endometroid combination.

All the above-mentioned factors such as obesity, nulliparity, and comparatively younger age may attribute a “hormonal field effect” to the development of synchronous endometrioid cancers. The morphological unit consisting of the uterus, fallopian tubes, and ovary as part of the müllerian system may explain the synchronous appearance of these malignancies [6]. Niskakoski et al. have suggested a shared origin of synchronous endometrial and ovarian carcinoma in Lynch syndrome (LS), indicating converging pathways of tumorigenesis. L1 cell adhesion molecule (L1CAM) overexpression was significantly common (43%) among synchronous patients [23].

All patients in our cohort underwent surgical intervention. The standard operation involved hysterectomy and bilateral salpingo-oophorectomy (BSO) with or without removal of pelvic lymph nodes, and completion surgery on the ovarian protocol, which consisted of infracolic omentectomy and peritoneal biopsies and washings. Pelvic lymph node dissection (PLND) as part of the FIGO staging was performed in some patients, but it had no therapeutic benefit other than allocating patients to poor prognostic groups. The most commonly encountered surgery-related complication was bleeding (two patients), while one patient developed a postoperative infection.

Our study has certain limitations, such as its retrospective nature, the small number of patients enrolled due to the rarity of the disease, and a lack of molecular profiling due to cost-related issues in a developing country with poor socioeconomic status. Nevertheless, we believe the results will help toward a better understanding of the trends and outcomes of this rare entity in the South Asian population. Multicenter studies with a larger number of patients may enable us to delineate this subset of patients in a more comprehensive manner in order to provide more focused and tailored treatment.

Human subjects: Consent was obtained by all participants in this study. Institutional Review Board, Shaukat Khanum Memorial Cancer Hospital And Research Center issued approval Not applicable. Due to the retrospective nature of the study, the Institutional Review Board of Shaukat Khanum Memorial Cancer Hospital And Research Center granted an exemption for this study and waived the need for patient consent. Animal subjects: All authors have confirmed that this study did not involve animal subjects or tissue. Conflicts of interest: In compliance with the ICMJE uniform disclosure form, all authors declare the following: Payment/services info: All authors have declared that no financial support was received from any organization for the submitted work. Financial relationships: All authors have declared that they have no financial relationships at present or within the previous three years with any organizations that might have an interest in the submitted work. Other relationships: All authors have declared that there are no other relationships or activities that could appear to have influenced the submitted work.

© Copyright 2020
Khalid et al. This is an open access article distributed under the terms of the Creative Commons Attribution License CC-BY 4.0., which permits unrestricted use, distribution, and reproduction in any medium, provided the original author and source are credited.