A multi-centre retrospective review was conducted of consecutive patients with a confirmed histological diagnosis of giant cell tumour of bone between June 2012 and May 2017. A total of 195 patients were identified from two centres. Of these, 168 patients were treated with curative intent and had more than six months follow-up. Data were collected on pregnancy status, comorbid conditions, site of disease, surgical management and local recurrence rates. Statistical analysis included the Fisher exact test and Kaplan-Meier survival analysis.

Giant cell tumours of bone (GCTB) are aggressive, locally destructive, benign bone tumours. They typically present in the third and fourth decades of life and account for approximately 5% of primary bone tumours [1]. Females are more commonly affected, with a reported predilection of 1.5:1 [2]. There are several clinical characteristics and presentations of GCTB that are still poorly understood.

GCTB presenting in the perinatal period, although rare, has been reported since the 1950s [3]. To date, there is no study investigating the relationship between perinatal GCTB and local recurrence rates.

Empirically, the authors noted that male patients presenting with GCTB were usually fit and healthy, whereas female patients often had other comorbidities, many of which were autoimmune in origin [4].

The aim of this paper was to investigate the relationship between pregnancy, comorbid conditions and GCTB, and whether these clinical presentations affect local recurrence rates. Previously described risk factors for local recurrence, including surgical management and site of disease, were also investigated.

A retrospective review was conducted in two UK primary bone tumour centres of consecutive patients with a confirmed histological diagnosis of GCTB between June 2012 and May 2017. Both institutions operate a biobank approved by the Health Research Authority that includes informed consent. Patients with malignant GCTB were excluded from this review. Local recurrence was evaluated in all patients who had treatment with curative intent and a minimum follow-up of six months [5]. Patients who were inoperable and treated with denosumab were excluded from survival analysis.

Data were collected from a secure database on site of disease, child-bearing status, pregnancy, comorbid conditions, surgical management and date of local recurrence. Childbearing was defined according to the published annual conception rate of the Office for National Statistics as any woman between 15 and 44 years of age [6]. Pregnancy was evaluated at the time of diagnosis and included a current pregnancy or a pregnancy within the last six months, including a termination, miscarriage or stillbirth.

In total, 195 patients (99 females and 96 males) were identified from the two centres.

There were 72 females of childbearing age, of whom 15 were pregnant or had been pregnant in the last six months (21%) at the time of diagnosis. This is a statistically significant difference compared with the highest national conception rate of 8.4%, (Fisher test, p = 0.033) [6].

Although most patients were otherwise fit and healthy, there were 20 patients who had a significant comorbid disease of neoplastic or autoimmune origin (Table 1).

Table 1: Clinical comorbidities in 20 out of 195 patients.

Females were more likely to have a significant comorbidity and had a higher rate of immune disease than males (Fisher test, p = 0.010) (Table 2).

Note: the p-value refers to the Fisher exact test comparing females and males.

Table 3: Demographic data of 168 patients who had treatment with curative intent and a minimum follow-up of six months.

Figure 1 shows that patients over 40 years of age were significantly less likely to have local recurrence than younger patients (logrank test, p = 0.043). 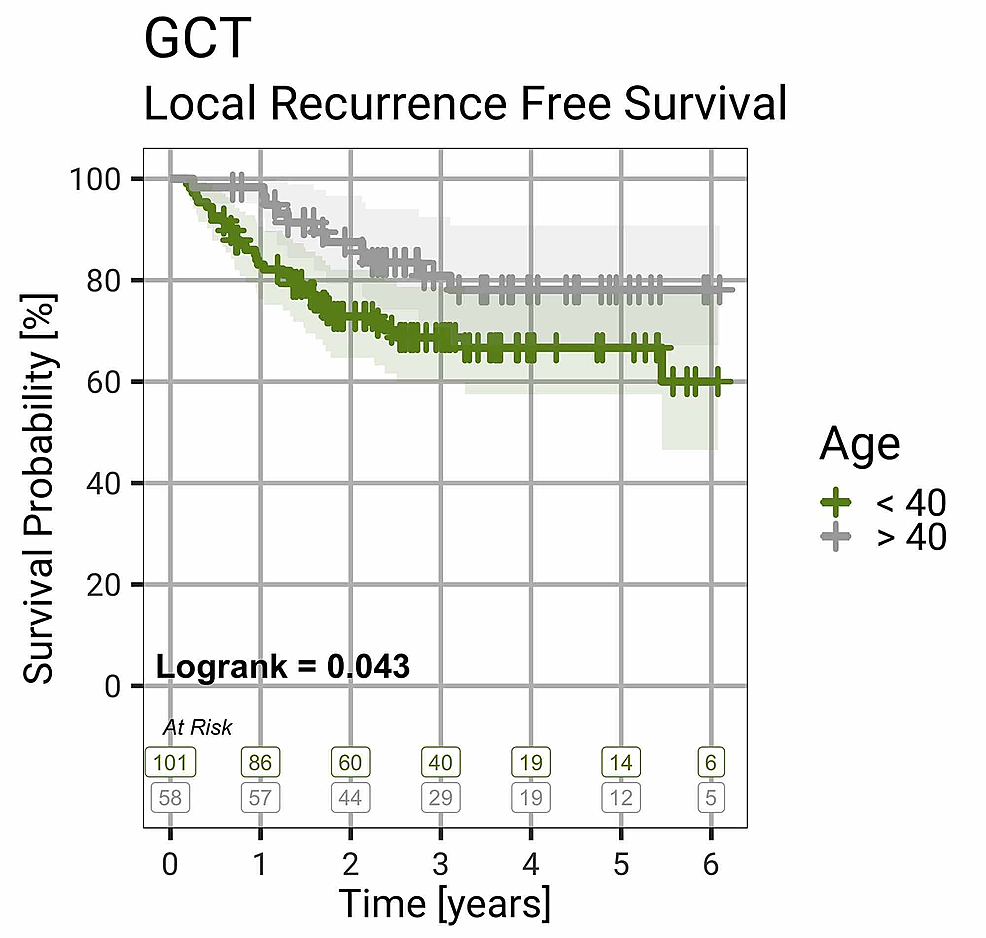 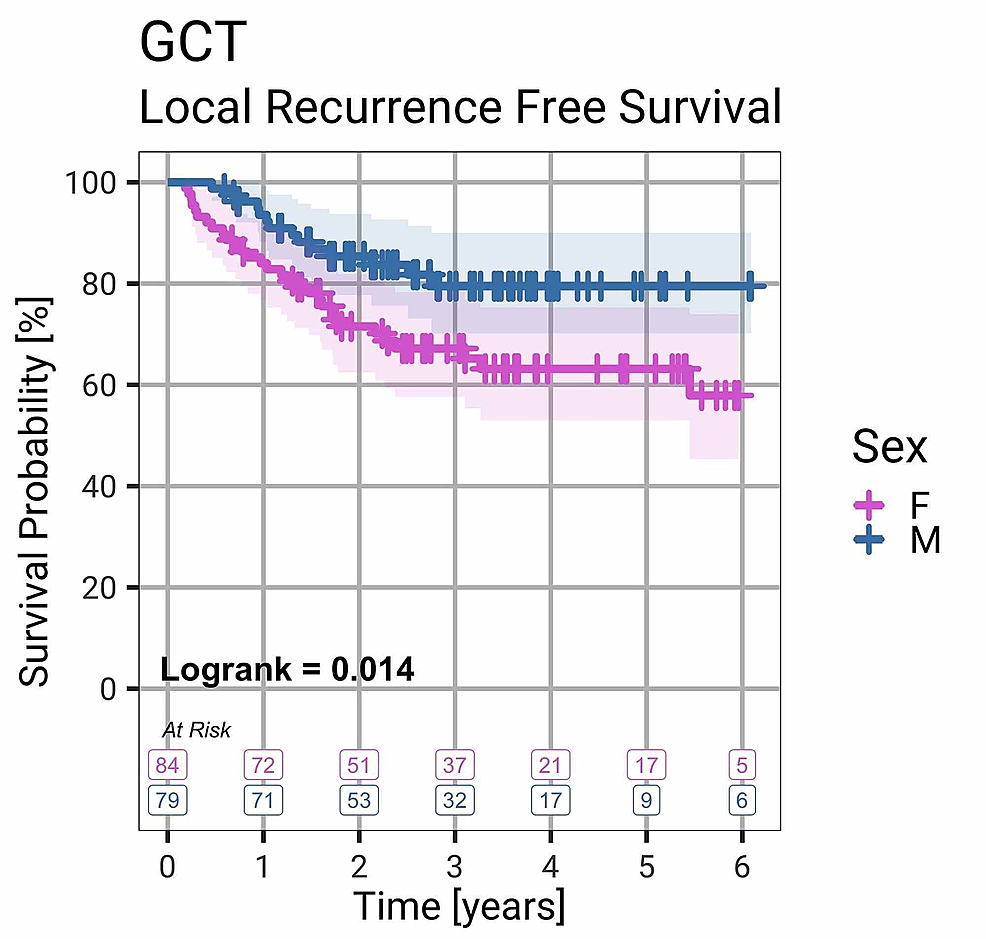 Of patients with comorbidities, there was no difference in local recurrence rate between the different disease subgroups.

Table 4: Type of treatment received according to Campanacci grade.

Campanacci grade 3 tumours that were managed with intralesional treatment were more likely to have local recurrence compared with other Campanacci grades (Table 5).

Table 5: Recurrence rate in patients who had intralesional treatment grouped by Campanacci grade.

Table 6: Details of patients who had adjuvant treatment with denosumab.

Local recurrence is more likely when the disease is in the distal radius (logrank test, p < 0.001) (Figure 3). 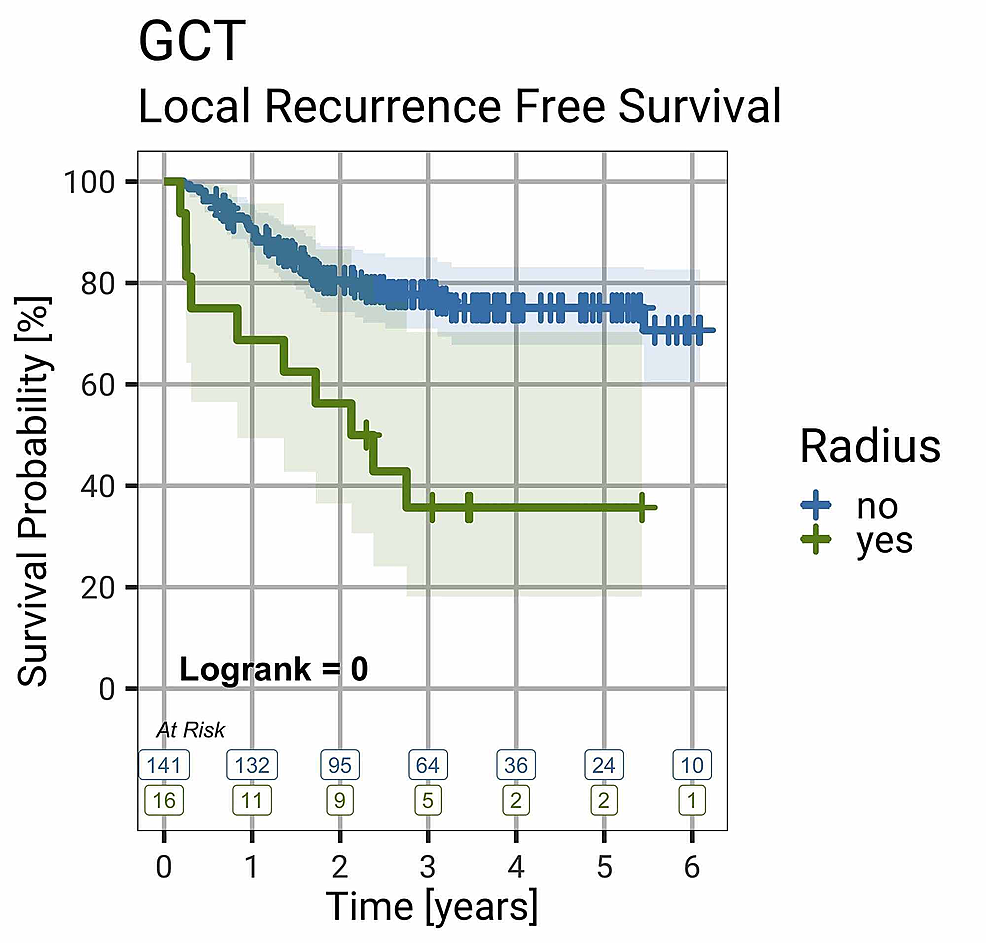 Figure 3: Local Recurrence-Free Survival in GCT of Bone by Site

However, of the 16 patients with a distal radial tumour, 11 had intralesional treatment.

There are three predominant hypotheses for the relationship between GCTB and pregnancy. Firstly, it has been hypothesised that the growth of GCTB in pregnancy is hormonally driven by the changing levels of oestrogen and progesterone in the perinatal period [13]. Some authors have reported the presence of oestrogen receptors on osteoclast-like cells in GCTB [14]. However, when investigating the presence of oestrogen and progesterone receptors in GCTB, oestrogen receptors are found in only approximately 51% of cases of GCTB, and there is no consensus as to the effect of the presence of oestrogen receptors on the biology or clinical behaviour of GCTB [14]. Secondly, it has been hypothesised that there is an immunogenetic relationship between GCTB and pregnancy. If antigens present on the tumour cells are like foetal antigens, maternal immune suppression during pregnancy allows progressive tumour growth [13]. Thirdly, one study found that pregnancy itself causes epigenetic changes due to the interaction between oestrogen, progesterone and histones [15].

Epigenetic changes in the H3.3 histone are well documented to be the sole contributor to the tumorigenesis of GCTB [16]. Therefore, epigenetic changes in the H3.3 histone and pregnancy could be associated with GCTB tumorigenesis [17]. Other authors believe the relationship between GCTB and pregnancy is coincidental as the peak prevalence of GCTB coincides with childbearing years [1]. Epigenetics and histone modifications also contribute to the development of autoimmune diseases including rheumatoid arthritis and systemic lupus erythematosus [18]. However, there are several histone modifications with complex functions that remain poorly understood. Autoimmune diseases are well documented to be associated with an increased malignancy rate due to chronic inflammation increasing cell proliferation, mutagenesis, oncogene activation and angiogenesis [4].

There are other factors which are more established in the literature that affect rates of local recurrence in GCTB. These include location of the tumour, surgical management and Campanacci grade. Previous studies have shown that local recurrence rates of GCTB located in the distal radius can range from 25% to 88% [19]. This may be attributed to inadequate exposure and dissection of the surgical site due to local anatomical characteristics [20]. Whilst an en bloc excision of the tumour may decrease local recurrence rates, these procedures are more likely to have significant morbidity or complications such as carpus dislocation and deep infection [21]. Our study agrees with the current literature, and patients with GCTB in the distal radius are significantly more likely to develop local recurrence.

Although both centres have a similar treatment strategy for patients with GCTB, variation between surgeons and centres is a limitation of this study. Generally, intralesional treatment with thorough curettage, subsequent burring down of the cavity with a high-speed burr and pulsatile lavage was favoured. Particularly around the knee, the cavity was usually augmented with polymethylmethacrylate cement, but no other adjuvants were used.

In keeping with other published literature, our study demonstrated that intralesional treatment had significantly higher rates of recurrence than excision. However, the increased recurrence rate is felt to be justified to maximise functional outcomes, and therefore intralesional treatment of GCTB is the preferred first-line surgical management for most cases of GCTB [19,21]. The high local recurrence rate in distal radius tumour perhaps would justify a more aggressive approach in this location.

There are a variety of factors that affect local recurrence in GCTB. Disease in the distal radius, intralesional surgical management, being female and age younger than 40 years all increase the risk of local recurrence. Although there are higher rates of pregnancy and comorbidities in patients with GCTB, this does not appear to affect the local recurrence rate.

Further studies involving multiple centres are required for confirmation of the relation between comorbid conditions, pregnancy and GCTB. Furthermore, a better understanding of the underlying biological pathways is required.

© Copyright 2020
Howard et al. This is an open access article distributed under the terms of the Creative Commons Attribution License CC-BY 4.0., which permits unrestricted use, distribution, and reproduction in any medium, provided the original author and source are credited.

Figure 3: Local Recurrence-Free Survival in GCT of Bone by Site

Table 1: Clinical comorbidities in 20 out of 195 patients.

Note: the p-value refers to the Fisher exact test comparing females and males.

Table 3: Demographic data of 168 patients who had treatment with curative intent and a minimum follow-up of six months.

Table 4: Type of treatment received according to Campanacci grade.

Table 5: Recurrence rate in patients who had intralesional treatment grouped by Campanacci grade.

Table 6: Details of patients who had adjuvant treatment with denosumab.