Leukocytosis is common among patients suffering from cancer when leukocytes count exceeds 11,000 cells per mm3. This is a usual immune response toward infection and foreign elements. This leads to the release of inflammatory mediators at the targeted site. Studies have found leukocytes count increase in diabetes mellitus patients. Random glucose level indicates the patient is at risk of developing diabetes mellitus. In this study, the association between random glucose level and leukocytes count in female cancer patients is evaluated. About 210 cancer patients included in this study and the results have indicated a positive association between high glucose level and high leukocyte count. This indicates poor prognosis of the patients as high glucose levels increase tumor cell proliferation and high leukocytes count can induce inflammation leading to the progression of cancer and increase mortality rate.

The mortality rate due to cancer is high worldwide. Leukocytes have a major role in immune system response against cancer as they recognize and infiltrate tumors [1]. Expansion of leukocytes in the blood is defined as leukocytosis and upon activation, they well release several inflammatory mediators. Normal level of white blood cells (WBC) is different and age-dependent, the normal level in adults is 4500 to 11000 cells per mm3; this level is higher in infant and pregnant females [2,3]. A study has recommended that reference range for leukocytes count should be set according to the laboratory specific analyzer. This is due to different validation processes [2]. Leukemoid reaction is a phenomenon that occurs due to factors such as infection and solid tumor formation, and it is defined as when leukocyte numbers expand to reach 50,000 up to 100,000 cells per mm3 [3,4]. The involvement of bone marrow or high levels of a granulocyte-colony-stimulating factor (G-CSF) can induce leukocytes expansion [3,5]. Leukocytosis is detected in solid tumor patients which can lead to severe complications. The expansion of leukocytes can reach levels of leukemoid reaction between 50,000 to 100,000 per mm3 which can lead to an inflammatory response [3,5]. Human papillomavirus (HPV) is the main etiological factor of cervical cancer, and experimental models with HPV-positive models have shown high recruitment of leukocytes toward these cell lines [6]. Various studies have detected several abnormalities in hematological patterns in cancer patients. Leukocytosis was detected in patients with solid tumors according to a study that detected anemia and thrombocytosis as well [7]. Leukocytosis was also detected in non-small cell lung carcinoma [8]. Moreover, it was also detected in colorectal cancer patients which also accompanied by dehydration and malnutrition [9]. Another study has reported leukocytosis with anal cancer patients, which can assist in predicting possible relapse after treatment [10]. Leukocytosis was also correlated with increase mortality rate when co-existing with thrombosis [11].

Diabetes mellitus (DM) impact on health is thoroughly studied and documented. Glucose intolerance and chronic complications of DM are associated with an expansion of leukocytes number, which can also advance and cause nephropathy [12,13]. In this study, an investigation about the association between glycemic status and leukocytes number in cancer patients was conducted.

This retrospective study was approved by the directorate of health affairs in Taif city for the period of 2018 to 2019; a consent form was provided. Firm inclusion measures were applied to include the data in the study. Firstly, patients in the study diagnosed with any type of cancer at King Faisal Hospital (KFH) between 2018 and December of 2019; secondly, only female cancer patients were included; thirdly, they had a measurement of both glucose levels and leukocytes count. The number of recruited participants in this research was 210.

When patients were requested to provide biopsy samples, a minimum of 3 mL of venous blood was collected, analyzed freshly, and not stored through ROCHE COBAS® platform e501. Patients were advised to fast for 10 hours before collecting the blood. This study collected the following information: age of the patient, type of diagnosed cancer, glucose level, and WBC count.

The number of participants in this study was 210 female patients from 2018 to December 2019. The youngest participant's age was 13 years and the oldest was 108 years old. All those patients were living in Taif. All study participants were females who were confirmed to develop malignant tumor (Table 1).

Table 1: Participants are distributed into three groups according to their age.

Table 2: Frequency of cancer patients are distributed according to the tissue and diagnoses. 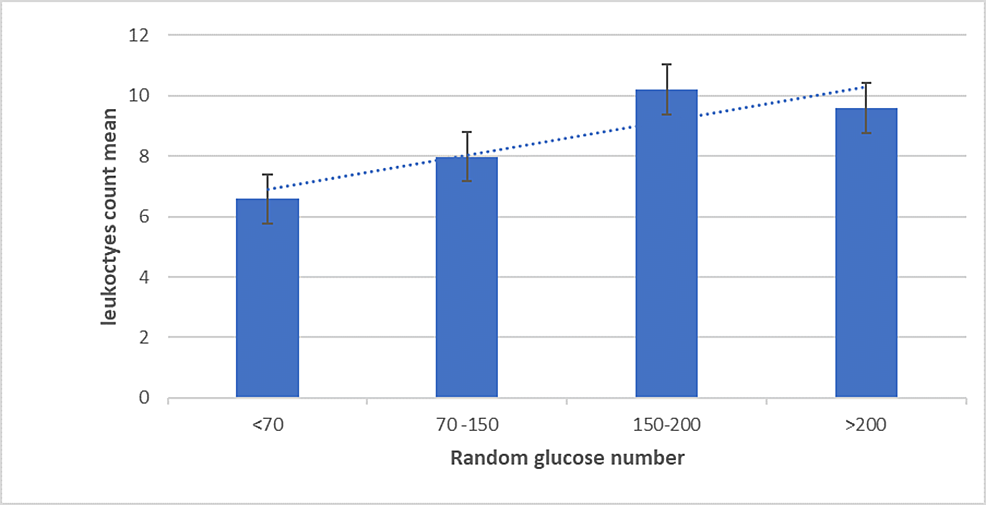 Figure 1: In the bar-graph, the mean of leukocytes count is positively increasing in association with the increase in RGL concentration in the blood. The lowest level is in <70 RGL group (P-value .0208).

Table 3: Association between RGL and leukocyte count is identified according to age, cancer type, and menopause status. 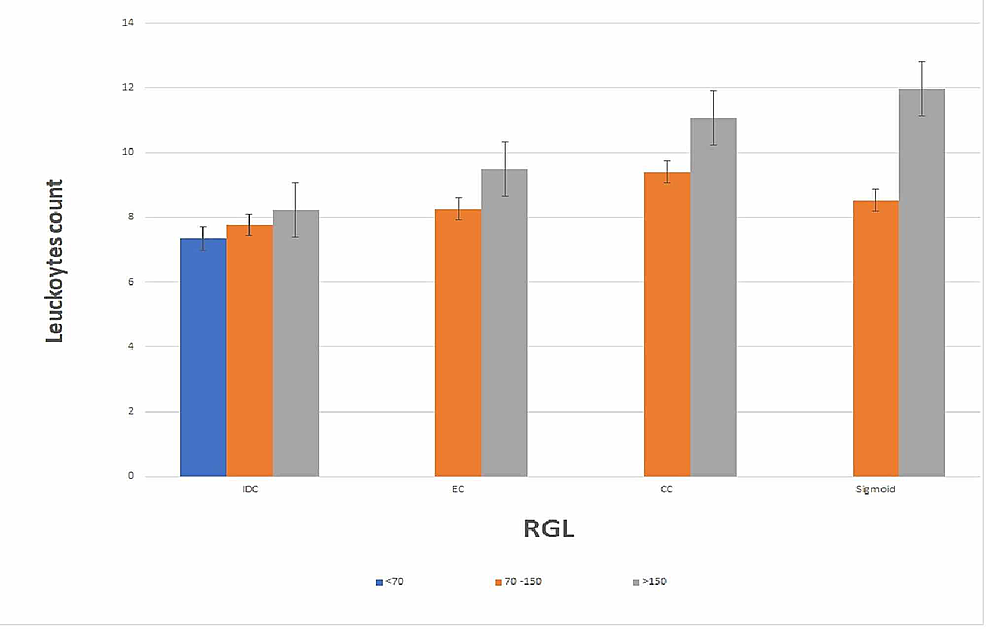 High glucose levels can increase the proliferation rate of tumor cells. Inflammation is an immune response detected due to infection and tumor development. One of the important features used for diagnoses is inflammation due to tumor-infiltration by leukocytes, where they assist by releasing of several inflammatory mediators. Leukocyte count is a common and affordable test. And it assists in diagnoses, especially in cancer patients. This study has investigated the association between leukocytes count and RGL in female cancer patients. Leukocytes count was higher in those with RGL >150 mg/dL, and the lowest count was detected in those with RGL <70 mg/mL. These findings are consistent with another study, though they have stated that this elevation is an association with a defect in glucose metabolism [14]. Another study demonstrated that cancer mortality is associated with elevation in leukocytes count, where it has reported that this mortality rate is independent of DM, and fasting glucose level [15]. One study found an elevation in leukocytes count before and after the treatment of lung cancer [16]. About 43% of post-menopausal cancer patients have developed leukocytosis, and 30.3% of them are hyperglycemic which was reported by other studies in breast cancer patients and ovarian carcinoma [17,18]. Leukocytosis was higher in patients >40 years old, and especially in post-menopausal females. A study performed by Connolly et al. has detected leukocytosis in several cancer types such as in breast cancer, gastric and pancreatic cancer, lung cancer, and blood cancer [11]. That is consistent with this study findings as leukocytosis was found in 50% of blood tumor patients, 5% of breast cancer patients, where 8% was hyperglycemic, 4% was gastrointestinal tract cancer patients and 11.11% were hyperglycemic. In head and neck cancer patients, leukocytosis was found in 5% of the patients. Squamous cell carcinoma is frequent in head and neck cancer due to factors such as human papillomavirus (HPV) [19]. Many studies have reported leukocytosis in head and neck cancer patients [20]. In female genital tract patients, about 20% had leukocytosis, and 22.22% of hyperglycemic patients had leukocytosis. In female genital tract cancers, leukocytosis is a major prognostic to evaluate survival rates, such as in cervical cancer and endometrial cancer [21-23].

The author would like to thank the deanship of scientific research for their support. And thanks to all medical staff in King Faisal Hospital and everyone participated in this study.

© Copyright 2020
Almehmadi. This is an open access article distributed under the terms of the Creative Commons Attribution License CC-BY 4.0., which permits unrestricted use, distribution, and reproduction in any medium, provided the original author and source are credited.

Figure 1: In the bar-graph, the mean of leukocytes count is positively increasing in association with the increase in RGL concentration in the blood. The lowest level is in <70 RGL group (P-value .0208).

Table 1: Participants are distributed into three groups according to their age.

Table 2: Frequency of cancer patients are distributed according to the tissue and diagnoses.

Table 3: Association between RGL and leukocyte count is identified according to age, cancer type, and menopause status.