Paroxysmal nocturnal hemoglobinuria (PNH) is a rare type of thrombophilia and hematopoietic stem cell disorder characterized by mutation of the X-linked PIG-A gene. Patients with PNH present either with clinical features of intravascular hemolysis or thrombosis. Visceral vein thrombosis is associated with increased mortality risk. Here, we present an extremely rare case of a young man presenting with extensive thrombosis of multiple visceral veins from PNH.

Paroxysmal nocturnal hemoglobinuria (PNH) is a rare hematologic disorder with 0.5 - 1.5 million cases worldwide [1]. It is an acquired form of hemolytic anemia caused by a somatic mutation in the X-linked PIG-A gene. PIG-A is responsible for synthesizing the glycosylphosphatidylinositol (GPI) that adheres numerous proteins to plasma cell membranes. Mutations in PIG-A result in the deficiency of complement inhibitory proteins CD55 and CD59. In the alternative pathway of complement activation, complement C3 spontaneously hydrolyzes and forms C3 convertase leading to activation of C3 and C5, which results in the formation of a membrane-associated complex, a key step in the terminal pathway. Normally, CD55 controls the level of C3 by degrading C3 convertase, and CD59 inhibits membrane attack complex (MAC) formations. Deficiency of these complement components in PNH results in two major clinical features: intravascular hemolysis and thrombosis [2]. Thrombosis is associated with increased mortality in PNH patients [3]. Hepatic and cerebral veins are the most common sites involved in PNH [4]. Other veins such as the portal vein and visceral veins have also been reported. The involvement of the portal vein and visceral veins without the involvement of hepatic veins is very rare. We present the case of a young male who presented with an extensive portal and visceral vein (superior mesenteric and bilateral renal vein) thrombosis. 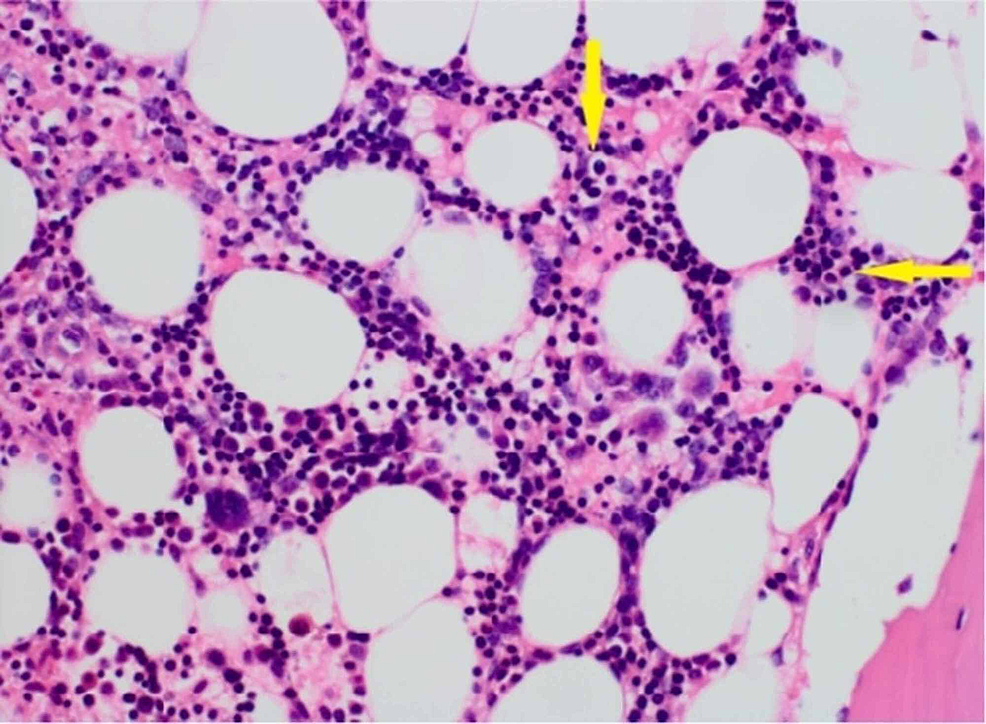 Abdominal vein thrombosis is a rare, life-threatening disorder that commonly involves the hepatic veins, portal veins, and mesenteric veins. Hepatic vein and portal vein thrombosis are most frequently involved sites in superficial vein thrombosis, commonly seen in the patients with cirrhosis or liver malignancy and uncommon causes include myeloproliferative disorders, PNH, factor V Leiden deficiency, protein C, protein S, anti-thrombin III deficiency, and anti-phospholipid [5]. Approximately 25.4-35.9% of patients with PNH have thrombosis during the diagnosis [6]. Hepatic veins are the most commonly involved site in PNH, isolated involvement of portal vein with visceral veins without the involvement of the hepatic veins is rare as depicted in our case, and the mortality risk associated with thrombosis in PNH was approximately 25.4%. Given the increased mortality risk, it is important to diagnose early and treat the condition [4].

The mechanism of thrombosis is unclear, although the literature has reported multiple factors associated with thrombosis in PNH, and several theories have been proposed. The first of these is the activation of granulocytes to release inflammatory molecules that damage the endothelium. As a result, leukocytes adhere to the damaged endothelium, which initiates the inflammatory process via inflammatory cytokine release, and the absence of the complement regulatory proteins CD55 and CD59 on the plasma cell membrane in PNH makes these cells more susceptible to complement-mediated activation and disruption [7]. Previous studies have reported a positive correlation between granulocyte clone size and risk of thrombosis [8, 9]. Another proposed mechanism is impaired fibrinolysis caused by a failure to convert plasminogen to plasmin. This is due to the absence of urokinase plasminogen activator on the surface of leukocytes in PNH [10]. Lastly, high levels of hemoglobin from hemolysis can lead to nitric oxide depletion, which was also reported to contribute to thrombosis [11].

PNH patients present with diverse clinical presentations from hemolysis to thrombosis. Abdominal pain, dysphagia, erectile dysfunction, and hematuria are common symptoms in PNH. The former symptoms can be explained by nitric oxide (NO) depletion, while the latter symptoms are due to hemoglobinuria; both occur as a result of elevated hemoglobin from increased intravascular hemolysis. As noted above, thrombosis is another finding in PNH patients. In these cases, laboratory findings can show anemia with an increased reticulocyte count, elevated LDH, elevated indirect bilirubin and decreased haptoglobin from hemolysis and when associated with other bone marrow disorders such as aplastic anemia, hypocellularity, pancytopenia, a decreased reticulocyte count can be seen on peripheral blood smear [12]. Ultrasonography is the initial investigation and the least expensive of all imaging modalities, with an overall sensitivity of 80% to 100%, but it has limited ability to provide additional information such as associated bowel infarction [13]. CT scan and MRI are more sensitive tools used in the diagnosis of venous thrombosis as well as bowel infarction and can reveal the status of adjacent organs [14, 15].

Given its association with increased mortality, the aim of thrombosis management is to treat and prevent its advancement. Anticoagulation has been proven effective in non-cirrhotic acute portal vein thrombosis. A systematic review reported that complete or partial portal vein recanalization occurred in 38.3% and 14% of cases, respectively, after the initiation of anticoagulation compared to 16.7% without anticoagulation [16]. Some authors have reported lifelong anticoagulation in patients with significant prothrombotic risk factors. Based on symptom acuity and presentation, intravenous (IV) heparin can be used with or without vitamin K antagonists. Eculizumab and allogenic bone marrow transplantation are the most widely used treatment modalities for secondary prevention of disease. A humanized anti-C5 monoclonal antibody, eculizumab acts by targeting complement C5, thus inhibiting the formation of membrane-associated complexes on red blood cell membranes and reducing damage. Multiple studies have reported the safety and efficacy of eculizumab in PNH [17-20]. All these studies have shown this drug to be effective in reducing intravascular hemolysis, decreasing the need for red cell transfusions, and mitigating the risk of thrombosis, thus improving quality of life. Bone marrow transplantation (BMT) is an alternative option for patients who have failed eculizumab therapy or in countries where eculizumab is not available.

This article was presented as a poster at American College of Gastroenterology Annual Scientific Meeting on October 14 - 19, 2016 at Las Vegas, NV.

Thrombosis is associated with increased mortality in PNH patients. Early diagnosis and awareness of differentials are very important in patients with non-cirrhotic portal vein thrombosis. Early anticoagulation and appropriate treatment can help improve survival in PNH.