These results reflect the worsening obesity epidemic and may be useful in counseling preoperative weight loss to morbidly obese patients to reduce mortality and complications.

As the annual volume of total hip arthroplasty (THA) in the United States approaches 635,000 procedures by 2030, the Center for Medicare and Medicaid Services (CMS) has targeted this expensive surgery with alternative payment models that reduce cost by shifting the financial burden of readmissions and complications onto the hospital systems and providers [1,2]. Nevertheless, the growing obesity epidemic and concurrent demand for THA by obese patients has complicated the selection process for hospital systems. To avoid financial penalties from the increased prevalence of deep vein thromboses, cardiac arrests, and infections associated with an elevated body mass index (BMI), many hospital systems have instituted BMI cut offs that prevent morbidly obese patients from undergoing THA until their weight is optimized [3-6]. However, since the obesity epidemic disproportionately affects populations already experiencing healthcare disparities, BMI restrictions may unintentionally alienate those with the greatest need by placing another barrier to care.

Obesity is undoubtedly a lifestyle disease; yet, there is ample evidence that social determinants of health are key risk factors that may inhibit patients from losing weight before surgery. For instance, people without college educations are twice as likely to be obese than their college educated counterparts [7]. Additionally, lower socioeconomic status is associated with higher rates of obesity. Interestingly, one study found that simply moving out of a highly impoverished neighborhood significantly reduced the odds of developing this disease [7]. Finally, ethnicity is associated with obesity, as African American and Hispanic communities face disproportionately higher rates of obesity than non-Hispanic Caucasians [8,9]. This alienation is concerning, as a cost-benefit analysis has suggested the benefits of THA in obese patients of all severities outweigh the associated risks and costs [10]. Given these findings, when surgeons render obesity down to a simple modifiable risk factor that must be optimized before THA, they risk placing undue burdens upon those with the least ability to change their situation.

To ensure safe, cost-effective surgery is performed without alienating those in greatest need, orthopedic surgeons may benefit from understanding the demographics, cost, and outcomes associated with obese patients. Unfortunately, there is a dearth of national studies that include an in-depth stratification of BMI. Therefore, this study utilizes a large national database to assess the effect of THA in patients with higher BMIs. Specifically, we evaluate the incidence, demographics, costs, and outcomes in non-obese (BMI<25.0 kg/m2), overweight (BMI=25.0-29.9 kg/m2), non-morbidly obese (BMI=30.0-39.9 kg/m2), and morbidly obese (BMI>40.0 kg/m2) THA patients.

The National Inpatient Sample (NIS) was used in this retrospective study. The NIS is a large publicly available database created and distributed by the Healthcare Cost and Utilization Project (HCUP) to encourage research in cost reduction and quality improvement [11]. The NIS contains 20% of all inpatient hospitalizations in the United States and, when unweighted, contains information on eight million annual hospital admissions.

Differences in demographics and outcomes between non-obese, overweight, non-morbidly obese, and morbidly obese patients were compared. Categorical variables were evaluated with chi-square analyses, while continuous variables were evaluated with one-way analyses of variance. A p-value of 0.050 or less was set as the threshold for statistical significance. All statistical analyses were conducted with SPSS version 25 (IBM Corp., Armonk, NY). 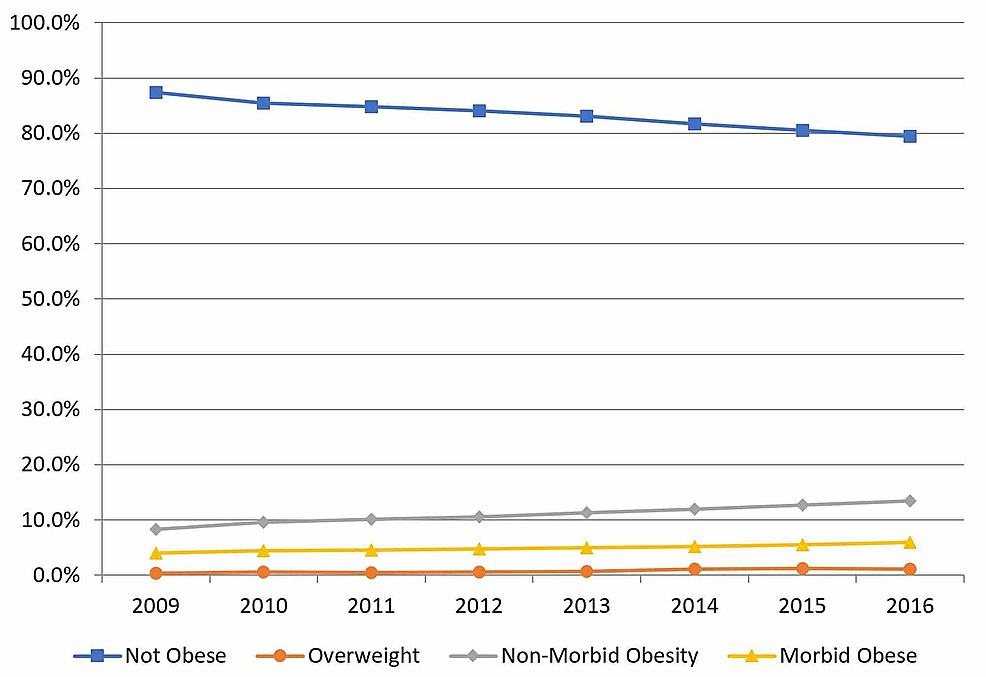 **In accordance with Healthcare Cost and Utilization Project reporting guidelines, cells with less than 11 patients were masked.

This study is not without limitations. Foremost, the NIS is an administrative database that is limited to the data elements collected. However, the database contains many important variables with substantial research potential. Furthermore, the NIS draws information only from the inpatient stay; thus, the patient cannot be followed longitudinally through their post-discharge course. Nevertheless, since this database is useful for research on LOS, demographics, cost, and trends, it is appropriate for the present study. Finally, the time period researched in the present study spans the transition from ICD-9 to ICD-10 diagnosis codes. Since ICD-10 offers a greater variety and detail of diagnosis codes than its predecessor, there is potential for coding errors as surgeons and hospital systems adjust to the change. Still, most of these errors would have been caught by HCUP, as the NIS undergoes extensive quality control. Despite these limitations, this study has value as it reports on important trends in morbid obesity in THA with a large sample size.

Previous studies have documented the increasing incidence of obesity in THA, such as the 2019 retrospective review by Pirruccio et al. [15]. This study analyzed 135,013 THAs from the National Surgical Quality Improvement Program (NSQIP) database between 2008 and 2016. They reported an increase in the average BMI from 30.18 to 30.26 kg/m2 in that timespan, and a proportional increase in the prevalence of obesity of 1.64%. Additionally, they reported an association between morbid obesity and a decreased rate of discharge home (odds ratio [OR]=0.73, p<0.001) and increased LOS (OR=1.19, p=0.004). The present study observed a greater increase in non-morbid (5.14%) and morbidly obese (1.94%) patients, while also reporting morbid obesity having the lowest proportion of patients discharged home and the highest LOS. The differences in incidences between studies may be due to the nature of the NIS and the NSQIP, as the NIS pulls information from a greater number of hospitals and thus, may be more representative of national estimates.

The present study observed the highest proportion of black patients among the morbidly obese category. This reflects the current obesity epidemic, which affects black and Hispanic Americans at higher rates than any other ethnic group according to a retrospective review of a large administrative database which followed obesity trends between 1999 and 2016 by Skinner et al. [18]. Additionally, in a prospective cohort study of 568 patients at a single institution, Brock et al. reported that higher BMI was associated with a younger age of total joint arthroplasty [19]. Furthermore, higher BMI patients were less likely to be non-Hispanic whites. Ostensibly, there may be an increasing demand for THA among morbidly obese patients who are younger and more diverse. Therefore, any decision to deny patients' THA based on modifiable risk factors should be made with cognizance not to ostracize patient populations experiencing existing disparities in care.

The results of this study reflect the ongoing obesity epidemic, as the proportion of morbidly obese patients undergoing THA increased significantly. Furthermore, morbidly obese patients demonstrated higher rates on complications, longer LOS, and higher cost than non-obese patients. Morbid obesity also demonstrated the highest proportion of black patients compared to other groups. Since BMI is considered a modifiable risk factor, preoperative optimization of weight may improve clinical and economic outcomes. However, as the incidence of morbid obesity continues to grow, further research may be needed to determine whether the efforts to avoid THA on morbidly obese patients further harms populations who already experience disparities in care.

© Copyright 2020
Wilkie et al. This is an open access article distributed under the terms of the Creative Commons Attribution License CC-BY 4.0., which permits unrestricted use, distribution, and reproduction in any medium, provided the original author and source are credited.

**In accordance with Healthcare Cost and Utilization Project reporting guidelines, cells with less than 11 patients were masked.

Changes in the Operative Corridor in Oblique Lumbar Interbody Fusion Between ...