Colon cancer is a cancerous tumor arising from the inner wall of the large intestine (colon). It starts as noncancerous small clusters of cells called polyps on the inside wall of the colon [1]. Without treatment, some of the benign polyps can become cancerous. It is the most common type of gastrointestinal tumors worldwide. In Saudi Arabia, it is the most common cancer among men and the third among women [2]. Although it can happen at any age, it usually affects older adults (above 50). Many factors may increase the risk of colon cancer, such as older age (over 50), African-American race, a personal or family history of colon cancer or polyps, chronic inflammatory diseases of the colon, such as ulcerative colitis and Crohn’s disease, low-fiber or high-fat diet, smoking, alcoholism, and obesity [3].

Symptoms of colon cancer depend on the stage. Many people with colon cancer experience no symptoms in the early stages of the disease. Therefore, regular screening is important and should start at age 50. When symptoms appear, they'll likely vary, depending on the size and location of the cancer in the large intestine. Generally, signs and symptoms of colon cancer include a persistent change in the bowel habits, including diarrhea, constipation, or a change in stool consistency, rectal bleeding, persistent abdominal discomfort (such as cramps, gas or pain), a feeling that the bowel does not empty, weakness or fatigue, and unexplained weight loss [4].

The American Joint Committee on Cancer (AJCC) categorizes colon cancer patients based on the extent of the primary tumor (T), lymph node involvement (N), and the presence of metastasis (M) [5]. The tumor node metastasis (TNM) staging system is used to stratify colon cancer into five main stages (0 to IV) to facilitate and personalize the treatment of modality and prognosis. Stage 0 denotes carcinoma in situ where abnormal cells are confined to the colon mucosa and have a chance of becoming cancerous. In Stage 1 colon cancer, cancerous cells are found in the mucosa and submucosal layers, whereas in Stage II, cancerous cells invade either the outermost layer (IIA), spread to the visceral peritoneum (IIB), or other nearby organs (IIC). Moreover, lymph node involvement marks the beginning of Stage III that is further subdivided into three substages based on the number of lymph nodes involved or nearby tissue. In the final stage (Stage IV), colon cancer spreads to distant sites or organs, such as the lung, liver, ovary, or distant lymph node, and is subdivided into three groups based on the number of affected organs [6]. The AJCC staging of colon cancer has guided multidisciplinary teams of health providers in selecting the most appropriate intervention for each patient.

The most vital prognostic indicator of survival in colon cancer is the stage of the tumor established by TNM classification which governs the type of clinical treatment selected for cancer patients [7]. Surgical resection of colon cancer is the universal norm of treatment, especially for Stage 0 and I tumors, and laparoscopic surgery was introduced in the late nineties only to prove its commensuration, if not superiority, to open colectomy. A complete or partial colectomy is used in all five stages of colon cancer depending on the feasibility of resection and tissue involvement. A recent systematic review reported laparoscopic colectomy had lower risks of adhesion-related small bowel obstruction and incisional hernia; however, the three-year disease-free survival between open and laparoscopic surgeries remained unchanged [8].

This retrospective cohort study was conducted at King Abdulaziz Medical City, National Guard Health Affairs (NGHA), Jeddah, Saudi Arabia. The study included adult patients 30 years old or older who were diagnosed with colon cancer and underwent surgical resection with or without adjuvant chemotherapy from 2009 to 2018. Patients were excluded if they received neoadjuvant chemotherapy.

The study data were collected using a data collection sheet consisting of five parts. The first part collected demographic characteristics and the second part collected risk factors associated with colon cancer. The third and fourth parts included the stages of colon cancer and treatment. The fifth part involved the recurrence of colon cancer. Patient names were not collected to maintain confidentiality. This questionnaire was filled by investigators. The questionnaire was not shared with the office staff or physician.

Data were analyzed using IBM SPSS Statistics for Windows, Version 20.0 (IBM SPSS Statistics, Armonk, NY). Participants were included using a non-probability convenience sampling technique, and the sample size was calculated using Rao online software (Raosoft, Inc., Seattle, WA). The margin of error was 5% with a 95% confidence level. This study was approved by our institutional review board. 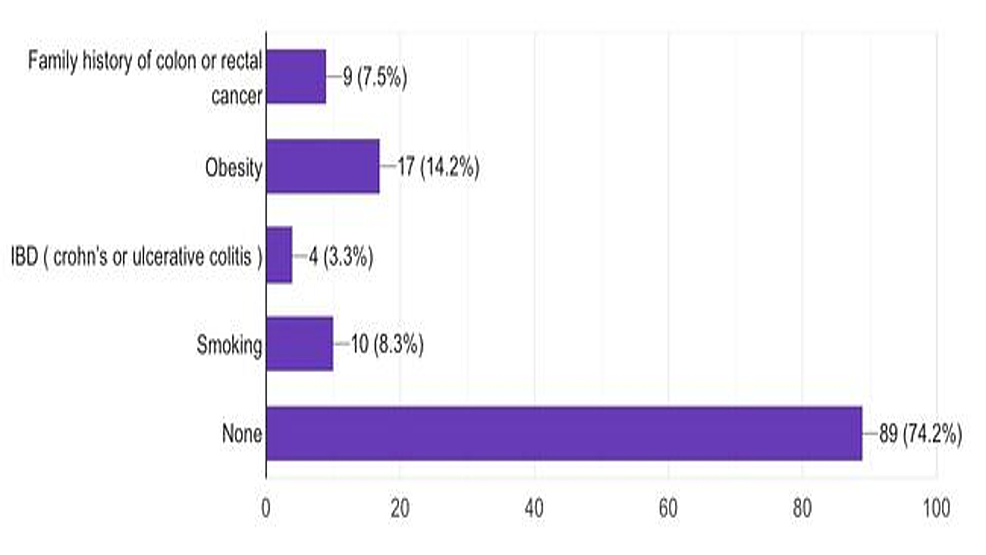 Globally, an estimated 1.48 million new cases occurred in 2012, ranking colon cancer the third most common cancer in the world [14]. According to the Saudi Cancer Registry, a total of 859 cases of colon cancer were diagnosed in 2015, making it the second most common cancer. In our study, we found that colon cancer was more common in males (61 cases) than in females (59 cases) with a small gap difference similar to what was reported in the Saudi Cancer Registry in 2015, where the number of cases in males was slightly higher than females (475 and 420 cases, respectively) [15]. Moreover, Brenner et al. reported that the mean age of colon cancer in German male patients was 66 years, while females had a mean age of 42 years [16]. The mean age of male patients in our study is 61 years, which is relatively comparable the global age of occurrence, but perhaps more closely resembles the median age of diagnosis of 59 years in males (range: 8 and 94 years) and 57 years in females (range: 15 and 102 years) as per the Saudi Cancer Registry [15].

A range of modifiable lifestyle factors increases the likelihood of developing colon cancer. A systematic review reported that smoking has been associated with both rectal and colon cancer with the former being at a higher risk [18]. Our study reported that 10 patients (8.3%) were smokers at the time of diagnosis which emphasizes the association between colon cancer and cigarette smoking. We also found that the most common site of colon cancer was the left side with a total of 66 patients (55%), 50 of which had cancer in the sigmoid colon, and 16 had cancer in the descending colon. Similarly, Golfam et al. investigated colon cancer in 218 patients and found that 50 patients (23%) suffered from left-sided colon cancer, while 26 patients (12%) suffered from cancer on the right side [19].

The main treatment modality for localized non-metastatic stage colon cancer is surgical resection. Surgery alone for patients with Stage I colon cancer can be curative, and there is no role for adjuvant chemotherapy for them. Patients with low-risk Stage II colon cancer, which comprised the majority of our cases (32.5%), can be on surveillance without adjuvant therapy with an excellent prognosis. Current National Comprehensive Cancer Network (NCCN) and American Society of Clinical Oncology (ASCO) guidelines strongly recommend adjuvant therapy for selected Stage II colon cancer with high-risk and all Stage III [9, 20].

There were several limitations in our study, such as small sample size and the lack of survival data, for the period 2009 - 2018.

© Copyright 2020
Alshehri et al. This is an open access article distributed under the terms of the Creative Commons Attribution License CC-BY 4.0., which permits unrestricted use, distribution, and reproduction in any medium, provided the original author and source are credited.