Hemochromatosis is a disorder of iron overload whereby there is toxic deposition of iron in various tissues and organs of the body. It can either be hereditary or secondary to some other underlying cause. Patients with mutations in the HFE gene are often predisposed to developing this disorder. It has a wide range of clinical presentation, from non-specific symptoms such as fatigue to overt development of cirrhosis, diabetes and skin pigmentation. We present an unusual case of hemochromatosis where an African-American female of child-bearing age presented to the emergency room with complaints of epigastric pain. She was found to have mildly elevated lipase and liver enzymes. Imaging studies were suggestive of acute-on-chronic pancreatitis with iron deposition in the spleen, pancreas and bone marrow. Her ferritin and transferrin saturation levels were elevated. She was diagnosed with acute-on-chronic pancreatitis secondary to alcoholism and hemochromatosis and treated with phlebotomy with good outcome. This case is one of the few reported cases of hemochromatosis in African-Americans, and emphasizes that even females in child-bearing age group can develop this condition. Elevated ferritin and transferrin saturation levels should prompt evaluation for this disorder.

Hemochromatosis is a well-defined syndrome characterized by toxic accumulation of iron in parenchymal cells of vital organs. It can be caused by mutations in any gene that regulate dietary iron absorption into the body. The iron-driven erythropoiesis is essentially normal [1]. Majority of patients with hemochromatosis are asymptomatic and only a small proportion develop symptoms of iron overload, sometimes with severe manifestations including cirrhosis, diabetes mellitus, cardiomyopathy and joint disease [2]. We describe an unusual case of hemochromatosis leading to pancreatitis.

A 32-year-old African-American female with past medical history significant for hypertension, pancreatitis, anxiety and left internal carotid artery dissection and thrombus presented to our emergency department with epigastric pain of one-day duration. Her medications included labetalol and lorazepam. She reported drinking two glasses of wine two to three times a week on average, her last drink being a day prior to admission. She had developed acute pancreatitis about a year ago which was attributed to alcoholism. Imaging studies at that time did not show signs of chronic pancreatitis. There was no significant family history of pancreatitis.

On arrival, her heart rate was 101/min and blood pressure was 177/116 mmHg. The remainder of the vital signs were otherwise within normal limits. Physical examination was significant for mild epigastric and left upper quadrant tenderness. 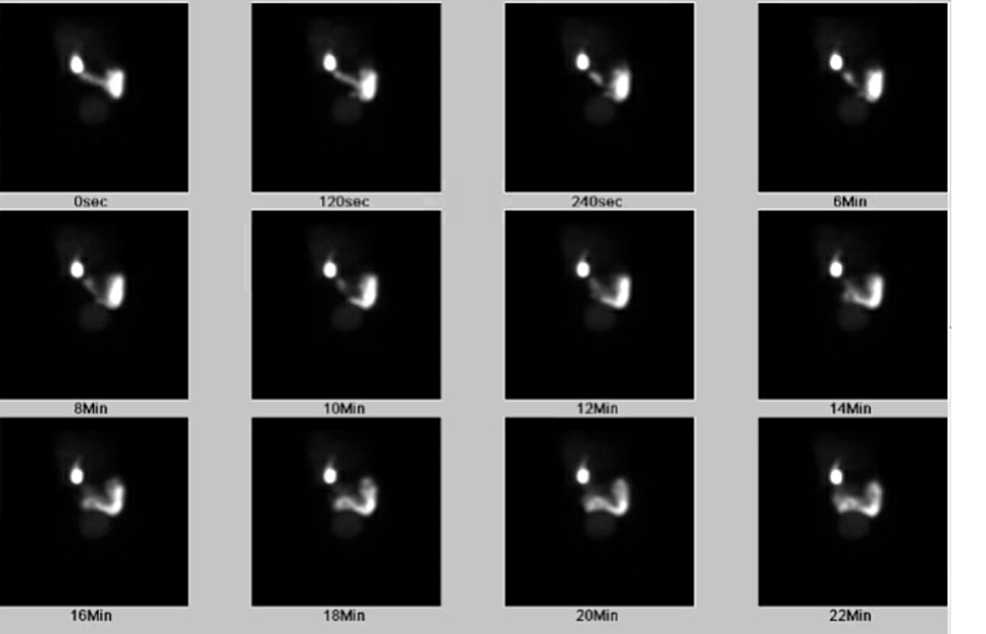 The figure shows the gallbladder ejection fraction of 6%. 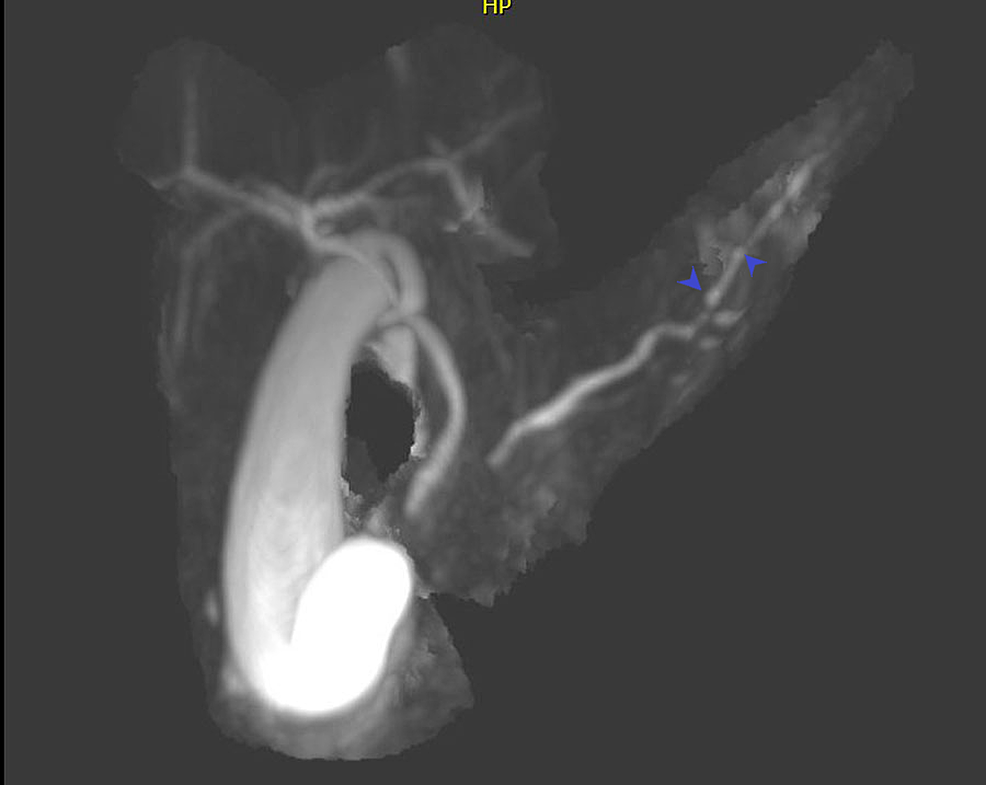 Figure 2: MRI of the pancreas after 3D processing.

The biliary tree was otherwise unremarkable. There were subtle changes in the signal characteristics in the spleen and marrow compartment suggesting iron deposition (Figure 3A, 3B).

Figure 3: Magnetic resonance cholangiopancreatography T1 W images - in phase (A) and out of phase (B).

Closer evaluation of the MRCP also showed loss of signal intensity in the pancreatic tail, suggestive of iron deposition. Due to extensive hepatic steatosis, iron deposition in the liver could not be adequately determined. Further lab work showed iron 143 mcg/dL (normal: 35-150 mcg/dL), total iron-binding capacity 166 mcg/dL (normal: 250-450 mcg/dL), transferrin saturation level at 86% (normal: 20%-55%) and ferritin at 692.6 ng/mL (normal: 14.7-205.1 ng/mL). Testing for human homeostatic iron regulator (HFE) gene mutations was done, and the patient tested heterozygous for the C282Y locus, but normal for the H63D and S65C locus. She was diagnosed with acute-on-chronic pancreatitis and hemochromatosis. She was managed conservatively and discharged home with plans for initiation of phlebotomy. The patient's transferrin saturation and ferritin levels normalized over the course of the next few months. There were no further episodes of pancreatitis on follow-up at one year.

Many clinicians believe that hemochromatosis is a rare disorder that is manifested by the clinical findings seen in fully established disease consisting of cirrhosis, diabetes and skin pigmentation (so-called bronze diabetes) [2]. However, these clinical findings are seen only in advanced cases, and many patients present initially with non-specific symptoms. Two types of hemochromatosis have been described: primary (or hereditary) and secondary.

Hereditary hemochromatosis remains the most common identified genetic disorder in Caucasians, with most mutations being in the C282Y, H63D and S65C loci of the HFE gene. However, generally only homozygotes of C282Y locus mutations or compound heterozygotes with C282Y/H63D or C282Y/S65C loci mutations develop overt iron overload. A minor miscellaneous group of hemochromatosis patients has also been identified that do not have any of these mutations [2].

Our case is unique for several reasons. The patient is an African-American female of child-bearing age. This is important since hereditary hemochromatosis is most common in Caucasians and usually affects females after menopause. The pattern of iron deposition did not seem specific to either primary or secondary hemochromatosis, although liver iron deposition could not be assessed.

From multiple reports, we now know that in patients with hemochromatosis, symptomatic organ involvement typically begins in midlife, often with non-specific symptoms. Liver disease usually predominates but endocrine disorders, cardiac problems and joint disease are also found. Therapeutic phlebotomy is usually effective [11]. Treatment is aimed at reducing total body iron levels and achieving normal ferritin levels. Goals for serum ferritin levels vary between 50 and 150 ng/mL. It is recommended to check hemoglobin levels before each phlebotomy and therapy should be withheld if the hemoglobin level is less than 12.5 gm/dL [12].

Our patient presented with epigastric pain and investigations revealed acute-on-chronic pancreatitis and evidence of iron overload. She did not have any risk factors for iron overload, such as history of multiple blood transfusions, but tested heterozygous for the C282Y mutation. Pancreatic iron deposition along with alcoholism probably led to the development of acute and eventually chronic pancreatitis. Our case emphasizes that patients with hemochromatosis have a wide range of clinical manifestations, and while liver involvement is the most common, they can present solely with pancreatitis. Pancreatitis with unexplained liver enzyme elevation should prompt evaluation for this rare disorder.

© Copyright 2020
Hitawala et al. This is an open access article distributed under the terms of the Creative Commons Attribution License CC-BY 4.0., which permits unrestricted use, distribution, and reproduction in any medium, provided the original author and source are credited.

The figure shows the gallbladder ejection fraction of 6%.

Figure 2: MRI of the pancreas after 3D processing.

Figure 3: Magnetic resonance cholangiopancreatography T1 W images - in phase (A) and out of phase (B).