Sixteen patients with the diagnosis of secondary hyperparathyroidism were treated surgically in our center. Demographical data, laboratory findings, and imagining methods were all examined. The effect of the Technetium 99m methoxyisobutylisonitrile (Tc-99m-MIBI) probe sensitive to gamma rays detection was also evaluated to locate and identify all the parathyroid glands during the operation.

Total parathyroidectomy and parathyroid autoimplantation is the most efficient and safe mode of management for secondary parathyroidism patients. During the surgery, using a probe sensitive to gamma rays detection may also help the surgeon. Thus, unnecessary dissections to prevent the presence of atypical parathyroid glands are prevented.

Hyperparathyroidism occurs when parathyroid hormone (PTH) levels are increased as a result of the overwork of the parathyroid glands [1-2]. It is rarely seen in childhood. Clinical manifestations of hyperparathyroidism are nonspecific findings such as loss of appetite, weakness, restlessness, and abdominal pain due to hypercalcemia.

There are three different clinical types: primary, secondary and tertiary. Secondary hyperparathyroidism often occurs in cases of end-stage renal disease and, more rarely, rickets, osteomalacia, and intestinal malabsorption [2]. In secondary hyperparathyroidism, 1, 25-dihydroxy vitamin D3 production is impaired due to end-stage renal failure. In order to compensate for chronic hypocalcemia, the PTH level increases. PTH, which increases as a result of hyperplasia in parathyroid glands, mobilizes calcium from the bones, and increases serum calcium level.

The diagnosis of parathyroid hyperplasia is made by clinical, laboratory, and imaging methods. Ultrasonography (US) and parathyroid scintigraphy are often used for imaging methods [3-5]. In patients with hyperparathyroidism secondary to end-stage renal disease, calcium levels decrease as a result of a rapid decrease in PTH after parathyroidectomy. Parathyroid autotransplantation is performed to prevent this, and serum calcium levels are regulated [1,5-8].

It has been seen in the literature that the number of cases with parathyroidectomy due to secondary hyperparathyroidism in children and adolescents is low, and it is mostly performed by adult surgeons [12-13]. The experience of adult surgeons does not fully reflect the treatment and follow-up methods related to children.

This study aimed to evaluate the diagnosis and treatment modalities of patients who were diagnosed with secondary hyperparathyroidism and end-stage renal disease and underwent parathyroidectomy.

A total of 16 patients who were diagnosed with secondary hyperparathyroidism by clinical and laboratory findings and imaging methods were included in the study. The study was approved by the medical ethics committee of our hospital (Project No: KA 10/80).

All patients were followed up by the pediatric nephrology department, diagnosed with secondary hyperparathyroidism, and planned as a treatment option with the pediatric surgery department. Surgical indications were parathyroid hormone (PTH) values above 700 pg/ml and those with clinical symptoms that did not respond to medical treatment with phosphate binders and active vitamin D analogs. The information of the patients was screened. The demographic data of the patients, the duration of follow-up period with the diagnosis of end-stage renal failure, diagnostic methods, the use of gamma probes during the operation, the state of parathyroid glands, and postoperative follow-up periods were recorded.

Parathyroid US and parathyroid scintigraphy were performed preoperatively. It was found that 75% of patients had parathyroid pathology with a US, but 62.5% of them had been diagnosed with adenoma, 12.5% had only pathology in the parathyroid glands, and no distinction could be made between hyperplasia and adenoma.

Table 1: Use of gamma probes and removal of parathyroid glands

Patients who had a postoperative follow-up period of mean two to 10 (mean 4.5) days, starting from the day of surgery. After discharge, patients were followed-up for six to 74 (mean 18) months, with PTH levels, calcium, phosphorus, and other routine biochemical tests. In the late follow-up period, routine biochemical tests and PTH levels were also evaluated. In six of seven patients whose parathyroid glands could not be removed, PTH values were not sufficient and one patient decreased to 26 pg/ml. 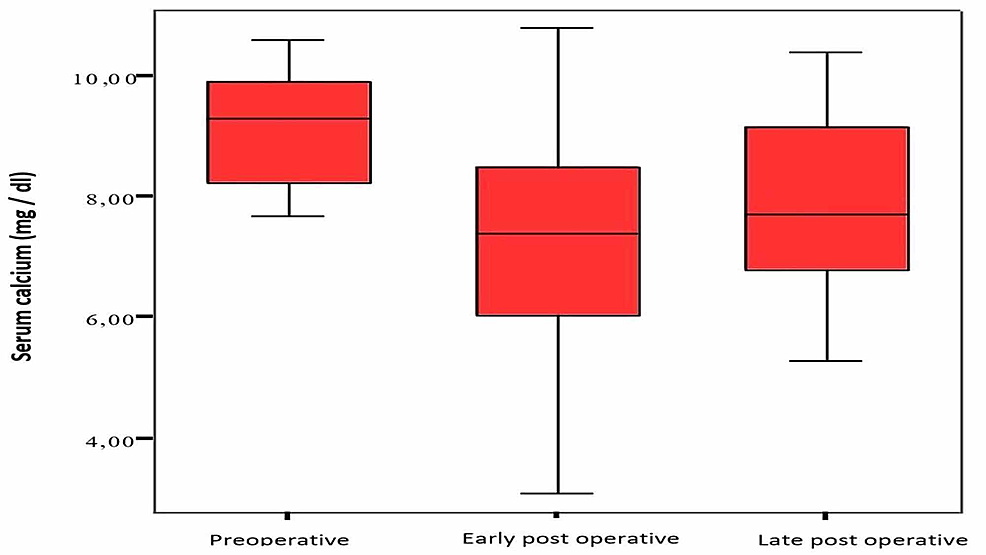 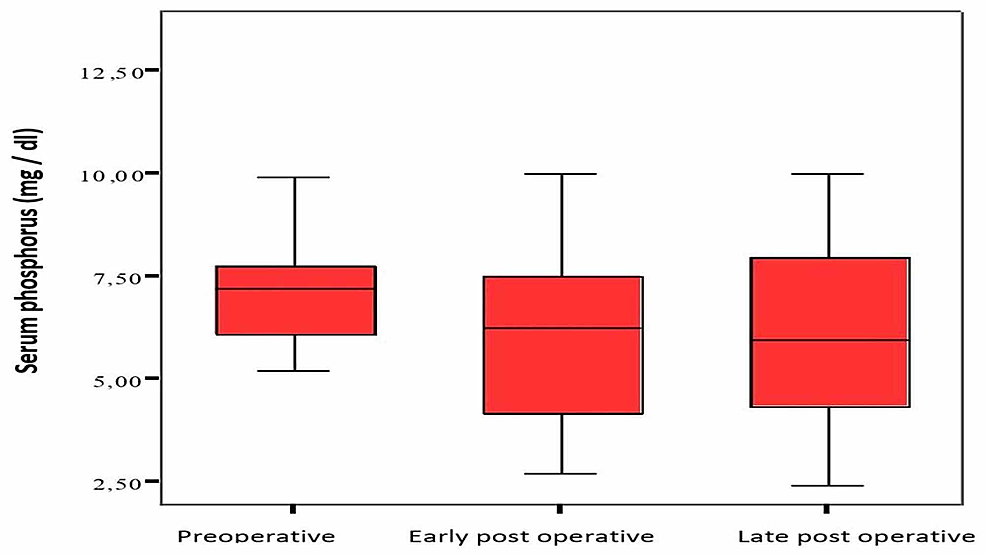 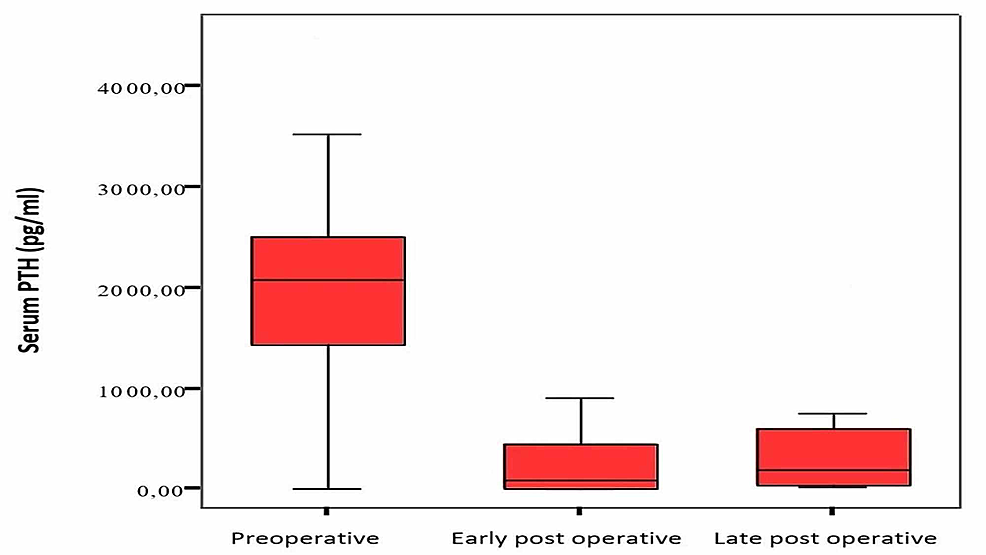 The most effective and safe treatment method for patients with secondary hyperparathyroidism is total parathyroidectomy and parathyroid autotransplantation [14-15]. The first successful parathyroidectomy was performed in 1928 by Isaac Y. Olch for bilateral parathyroid adenoma in America and later in 1932 by Cope and Churchill for bilateral neck exploration [5]. In times when the frozen procedure is limited, there is no preoperative evaluation and there are no intraoperative assistive techniques, the surgeon's experience is undoubtedly the only determinant for the success of the surgery.

The most commonly used radiological method for imaging parathyroid pathologies is the US. The accuracy rate of localizing adenomas is as wide as 34%-92% because it is dependent on the person performing the US procedure [3,16]. Normal parathyroid glands may not be displayed with the US. It is also difficult to visualize ectopic parathyroid pathologies [5,17]. CT and MRI are not routinely used in preoperative investigations. CT was not performed in any of our cases. Neck MRI was performed one of our cases because of the US and scintigraphy of the neck did not clearly distinguish between parathyroid pathology. However, no additional information was obtained from the US and scintigraphy. Therefore, in the diagnosis of these patients, it is not necessary to use these tests in routine applications because of the high radiation load on CT and the need for anesthesia, especially in younger ages, and does not provide any additional information in addition to other tests.

Surgical vital dyes have been introduced for the localization of the parathyroid glands a long time ago. Among these, the most well-known are Toluidine-Blue-o and methylene blue. However, Toluidine-Blue-o can lead to serious toxic effects, and that’s why it cannot enter routine use [19]. Although there are successful publications about methylene blue in the localization of parathyroid pathology in the literature, it has not been used routinely yet [20-21].

The most widely used method for parathyroid scintigraphy is Tc-99m-MIBI dual-phase parathyroid scintigraphy. Total uptake depends on mitochondria activity, gland size, and blood flow in the hyperplasic parathyroid glands or adenomas [4]. Single-photon emission computerized tomography (SPECT) improves the separation of focal MIBI retention in parathyroid tissue and thyroid nodules. SPECT is more frequently used in the imaging of ectopic parathyroid glands in the mediastinum region and in recurrent hyperparathyroidism cases [22-25]. Recently, 2-18F-fluoro-2-deoxy-D-glucose (FDG) and positron emission tomography (PET) imaging have been found to be successful in parathyroid pathologies especially in the nuclear oncology field [26].

In a study performed by Fuster et al., US sensitivity was reported as 55%, specificity was 67%, scintigraphy sensitivity was 72%, and specificity was 95% [27]. In another study by Ishibashi et al., the sensitivity of the US was reported to be 30% [28]. Kawata et al. found that the correct diagnosis rate was 63.6% in the use of the US to determine the size of the parathyroid glands and preoperative surgery in patients with secondary hyperparathyroidism [29]. In our study and literature, it was observed that the correct diagnosis rates with US were quite wide.

After a successful parathyroidectomy, serum calcium levels may decrease due to decreased PTH levels. While the PTH levels of eight of our cases decreased to normal limits, six of them were below 500 pg/ml and two were over 500 pg/ml.

When the preoperative and postoperative calcium and PTH levels of the patients were compared; the decrease in PTH level and the decrease in calcium level were statistically significant (p <0.05). When the treatment methods are examined, it is seen that the best results are obtained by total parathyroidectomy and parathyroid autotransplantation.

© Copyright 2020
Caglar et al. This is an open access article distributed under the terms of the Creative Commons Attribution License CC-BY 3.0., which permits unrestricted use, distribution, and reproduction in any medium, provided the original author and source are credited.

Table 1: Use of gamma probes and removal of parathyroid glands

Rare Cause of Abdominal Pain in an Adolescent Patient: Splenic Infarction in ...