Capitellar fractures are extremely rare injuries. They constitute about 1% of elbow fractures [1]. The mechanism of injury is usually axial loading through the radial head. Both conservative and operative methods have been tried for the management of these fractures [2]. In the present scenario, open reduction and internal fixation, which provides a stable congruent joint, is the most preferred treatment strategy. However, because of the complexity of these intra-articular fractures, surgical exposure and fracture fixation are difficult [2-9].

Regarding the fixation of the capitellar fracture, various implants, such as mini-fragment screws, Herbert screws, and bioabsorbable rods, have been used. Herbert screw fixation provides compression at the fracture site, stable fixation, and no intra-articular prominence of the implant [2,12-20]. There is no accepted guideline regarding the method of internal fixation for these fractures [2].

In our study, we used the anterolateral approach to assess the functional outcomes in 10 cases with coronal shear capitellar fractures fixed by Herbert screws. Our aim is also to investigate the outcome and safety of this surgical procedure. Our hypothesis was that open reduction and internal fixation of the coronal shear capitellar fractures with Herbert screws through the anterolateral approach of the elbow is an excellent method of treatment for these fractures.

Our study included 10 consecutive adult patients from June 2017 to July 2018 with coronal shear capitellar fractures. None of the patients had the involvement of the posterior condyle along with a fracture of the capitellum. Preoperative consent was taken for all patients and approval from the department was taken. All the patients were followed up for a minimum of 12 months. They were all treated with open reduction and internal fixation with Herbert screws by the anterolateral surgical approach within five days of trauma. Open fractures were excluded from our study. The mechanism of injury, clinical examination, and radiographic data were recorded in each patient. Preoperatively, anteroposterior (AP) and lateral X-ray radiographs of the elbow were taken. Computed tomography (CT) with 3D reconstruction was done for a better assessment of the fracture profile and to rule out other injuries (Figure 1). The Dubberley classification system [5] was used to classify the fractures (Table 1). 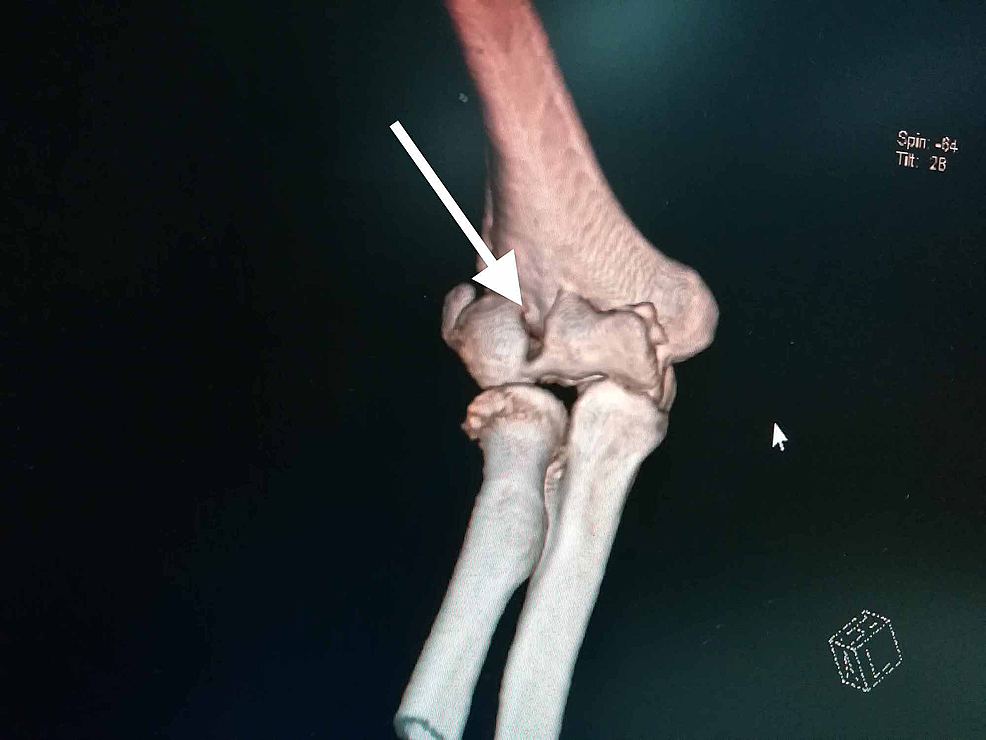 Figure 1: Computed tomography (CT) scans with a 3D reconstruction helps in the better assessment of the fracture profile

All the patients in our study underwent regional anesthesia or general anesthesia depending on the preference of the anesthesia team. Patients were positioned supine with the involved upper extremity over the broad radiolucent armrest and a tourniquet was tied around the proximal aspect of the arm. We checked for elbow ligamentous instability in all patients under anesthesia in the operating room just before the start of surgery.

The surgical approach was adopted as described in the study by previous studies [13,18,20]. The incision started 3-4 cm proximally above the elbow crease extending following the lateral border of the biceps muscle. The incision was then extended medially across the elbow joint obliquely and then extended in the proximal forearm following the medial border of brachioradialis for about 8 cm. We avoided crossing the elbow flexion crease at 90 degrees. The surgical dissection continued between the biceps and brachioradialis origin by blunt dissection. In the superficial plane, care was taken to identify the antebrachial lateral cutaneous nerve and protect it. Then, the radial nerve was visualized on the deep surface of the brachioradialis and carefully retracted laterally to protect it throughout the duration of surgery. The biceps muscle and brachialis muscle was retracted medially and the anterior capsule of the elbow joint was exposed. The capsule was cut longitudinally for fracture site exposure (Figure 2). 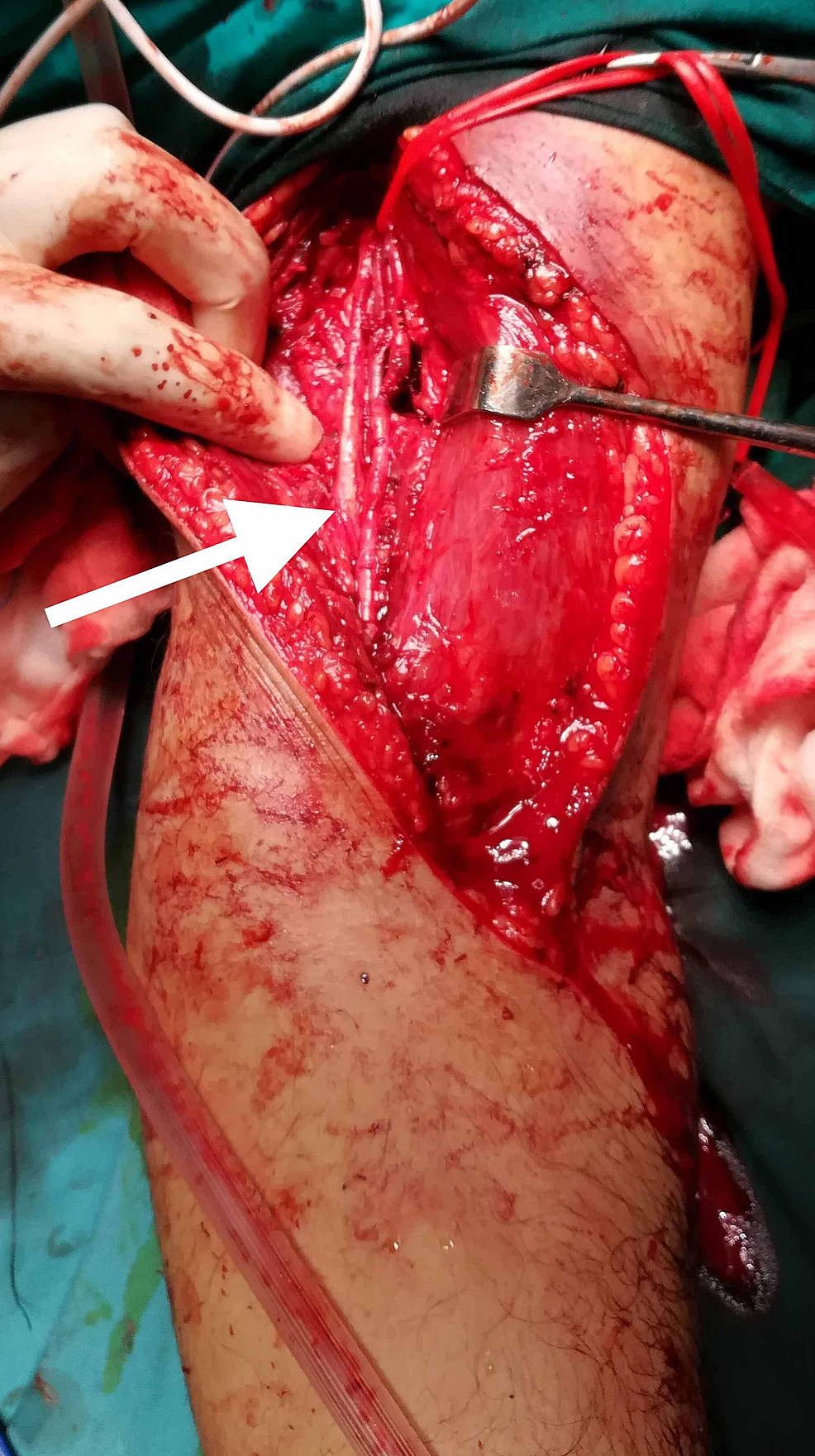 Figure 2: Anterolateral approach for exposure of the elbow joint. Please note the important neurovascular structures indicated by the arrow

After exposure of the fracture site, thorough irrigation was done to remove the blood clots. Sometimes, for better visualization of the medial and lateral extent of the fracture, a Hohmann retractor was placed along the supracondylar ridge of the distal humerus. The anatomical reduction of the fracture was then done by matching the articular fracture lines and stabilized provisionally with multiple guidewires. The reduction was then checked with fluoroscopy. Then, after drilling over guidewires, Herbert screws were inserted over the guidewires and the screws were buried under the articular cartilage. The elbow was then assessed for the full passive range of motion and stability. After the final assessment of the fracture reduction and position of screws with fluoroscopy, wound closure was done in layers and a negative pressure suction drain was used. Below are the images showing X-ray radiographs of capitellar fractures managed with Herbert screw fixation (Figures 3-4). 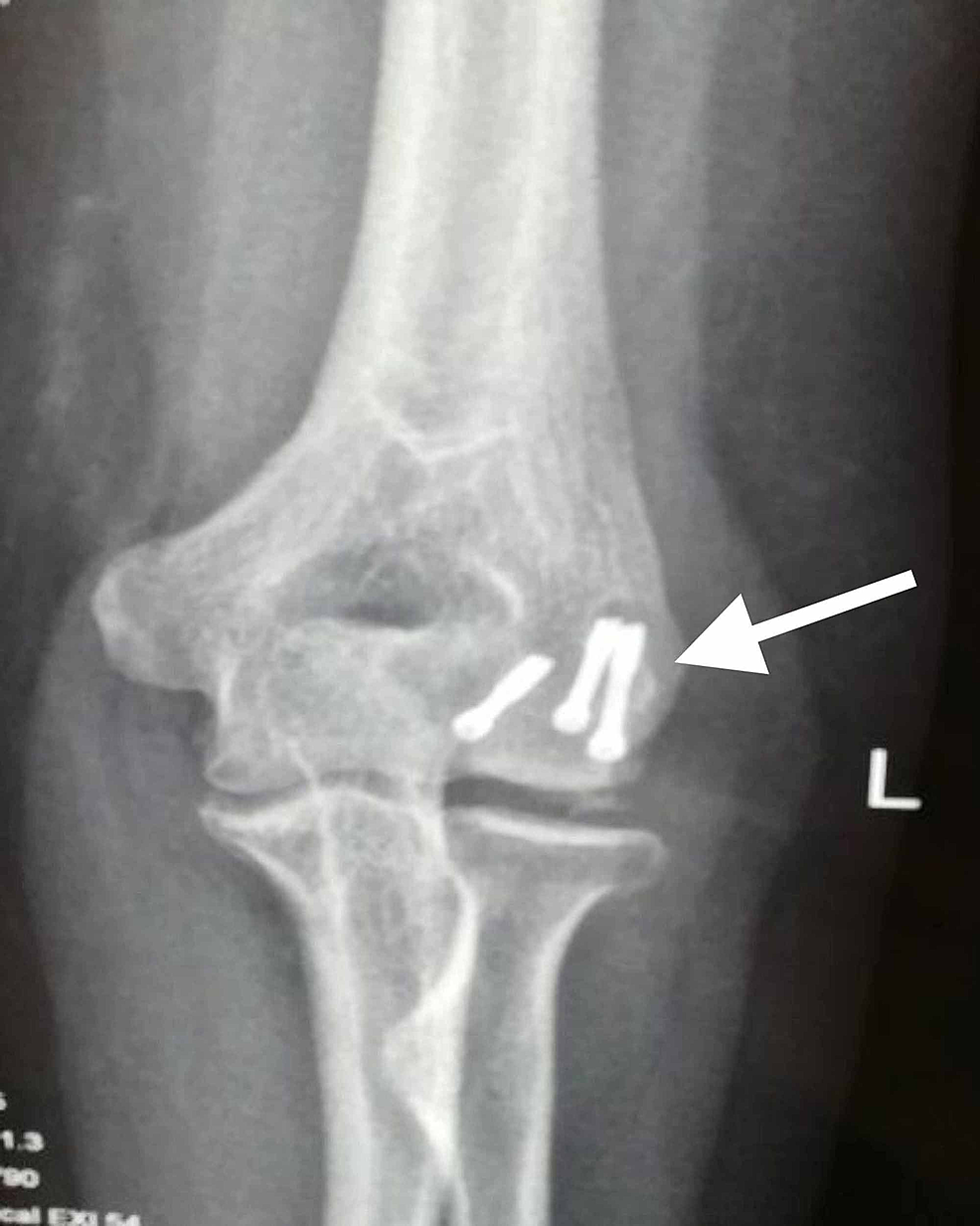 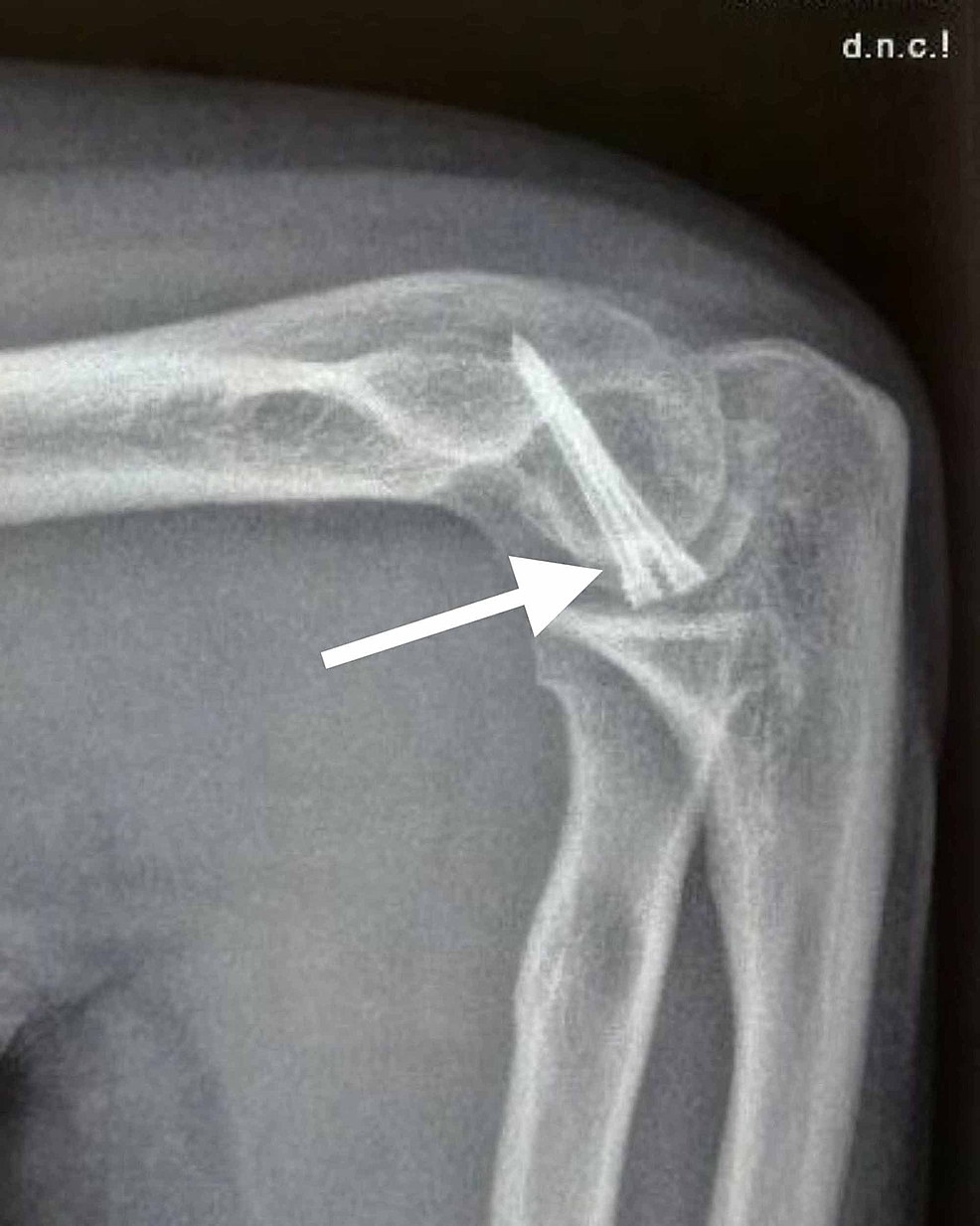 The elbow was immobilized in an above-elbow posterior splint to provide relief from postoperative pain. The elbow was kept at 90° of flexion and neutral rotation for five days in the splint. Adequate postoperative analgesia was given after consultation with the anesthesia team. The drain was removed after 48 hours and the active range of motion (ROM) of the elbow was started after five days.

Serial follow-up was done postoperatively at approximately one, three, six, and 12 months and patients were assessed clinically and radiographically. During every follow-up, the elbow range of motion, pain, and stability of the elbow joint were assessed clinically. Also, Mayo Elbow Performance Index (MEPI) scoring [2] was done at 12 months for every patient. Serial radiographs were done to evaluate the healing of the fracture, post-traumatic osteoarthritis, and avascular necrosis. Here is a video demonstrating the postoperative ROM of the elbow joint in an operated case of capitellar fracture managed with Herbert screw fixation (Video 1).

Video 1: Video demonstrating the postoperative range of motion of the elbow joint in an operated case of capitellar fracture managed with Herbert screw fixation through the anterolateral approach at 12 months follow-up

Eight patients were male, and two were female. The mean age was 29.3 years (range, 21 to 42 years). Four patients developed fractures due to falls, and six patients had a fracture of the capitellum due to road traffic accidents. There was no incidence of problems with wound-healing problems or infection. All fractures healed well in the anatomic position as confirmed on radiographs. During the final follow-up, two patients had mild pain. None of the patients had any complaints about the instability of the elbow. The flexion-extension range of motion was 136° ± 10° in the affected elbow and 145° ± 5° in unaffected elbow respectively. The supination-pronation range of motion was 173° ± 11° in the affected elbow and 178° ± 3°in the unaffected elbow, respectively. The values suggest that the ROM between the affected and unaffected elbows did not differ much. The average MEPI Score was 96 ± 4 (range 90 to 100). All 10 patients were satisfied and were able to return to their pre-injury activity levels. None of the patients had complications like post-traumatic arthritis of the elbow joint or avascular necrosis of the capitellum. One patient had developed a posterior interosseous nerve injury that recovered fully after six months. Below is the table showing patient demographics, mode of injury, range of motion, and MEPI score at follow-up (Table 2).

The implant used for fracture fixation is also an important area of interest. Various implants like the metallic lag screws, headless screws, bioabsorbable rods, dorsal plates, and fibrin glue were previously used for the reconstruction of capitellar fractures. Herbert screw fixation is now the most commonly preferred technique. Studies on joint biomechanics have demonstrated that Herbert screws can give good stability of fixation for capitellum fractures. Although several different types of screws like the cannulated, headless, cortical, and cancellous screws have been used, no direct comparison between fixation with different types of screws are available. This is due to the heterogeneous reporting of clinical outcomes with different implants. The advantages offered by Herbert screws are adequate fracture compression, stable anatomic fixation, and no intra-articular prominence of the implant [2,13,15-20]. In our study, the MEPI Score had good to excellent results (96 +/- 4), and it was similar to those previously published studies [2,9,14]. Although two patients reported mild pain during activity, all patients had a satisfactory functional outcome and they were able to return to pre-injury activity levels.

Also, no incidence of post-traumatic osteoarthritis of the elbow joint and avascular necrosis of the capitellum was reported in our case series, which is similar to several studies [6,18-19]. In our view, if the soft tissues attached to the capitellum is preserved, proper reduction and stable fixation with less damage to the articular cartilage is done, the incidence of these complications is minimal. In our opinion, satisfactory functional outcomes in coronal shear capitellar fractures can be made possible by accurate anatomic reduction, stable fixation, and early start of the ROM exercises. This can be achieved with ease by the use of Herbert screw fixation through the anterolateral approach of the elbow.

Our findings suggest that open reduction and Herbert screw fixation using the anterolateral approach is an excellent method of treatment for coronal shear capitellar fractures. This method can achieve stable fixation of the fracture and restoration of a functional range of motion of the elbow.

© Copyright 2020
Garg et al. This is an open access article distributed under the terms of the Creative Commons Attribution License CC-BY 3.0., which permits unrestricted use, distribution, and reproduction in any medium, provided the original author and source are credited.

Figure 1: Computed tomography (CT) scans with a 3D reconstruction helps in the better assessment of the fracture profile

Figure 2: Anterolateral approach for exposure of the elbow joint. Please note the important neurovascular structures indicated by the arrow

Video 1: Video demonstrating the postoperative range of motion of the elbow joint in an operated case of capitellar fracture managed with Herbert screw fixation through the anterolateral approach at 12 months follow-up