Infectious Cryptococcus neoformans occurs primarily in immunocompromised patients. The primary organ affected is the lungs, but the infection of the central nervous system (CNS) is also be seen. Disseminated cryptococcosis can involve any organ in the body. However, hepatic involvement is rare. Here we discuss a case of cryptococcal hepatitis in a patient who presented with persistently elevated liver enzymes. A 56-year-old Ecuadorian female with no known past medical history presented with fever, abdominal pain, nausea, unintentional weight loss, and diarrhea for two months. Her liver function tests (LFTs) revealed elevated aspartate aminotransferase (AST: 415 U/L), elevated alanine aminotransferase (ALT: 201 U/L), elevated alkaline phosphatase (ALP: 763 U/L), but normal total bilirubin (0.9 mg/dl). Her HIV antigen screening was reactive, and the absolute cluster of differentiation 4 (CD4) helper count was 22 cell/µL. Over the course of her hospital stay, the patient's liver enzymes continued to trend upward, with negative Histoplasma antibodies and negative serum cryptococcal antigen titers. During the second week of hospitalization, her liver enzymes continued to rise with an ALP of 4046 U/L, AST of 436 U/L, and ALT of 276 U/L. With a persistent elevation of the liver enzymes without any definitive cause, an ultrasound-guided biopsy was performed. Pathology revealed cryptococcal hepatitis, and the patient was started on a 15-day course of amphotericin B with an eight-week course of fluconazole 400 mg with LFTs nearly normalizing at six weeks. This case demonstrates an unusual manifestation of cryptococcosis. Our patient did not present with the typical cryptococcal pulmonary or central nervous system infection. Additionally, our patient's serum cryptococcal antigen titers were negative, but biopsy results revealed cryptococcal hepatitis, despite a very high sensitivity and specificity of the serum cryptococcal antigen test. This case demonstrates the importance of maintaining a broad differential, specifically in immunocompromised patients.

Cryptococcus neoformans occurs primarily in immunocompromised patients such as those who have contracted the human immunodeficiency virus (HIV), organ transplant recipients, and patients on long-term corticosteroid. While lungs are the primarily affected organ, the central nervous system (CNS) and the skin are also commonly affected. Disseminated cryptococcosis can involve almost every organ in the body; however, isolated hepatic involvement is very rare. We present here a rare case of cryptococcal hepatitis in a patient who presented with a negative serum cryptococcal antigen [1].

A 56-year-old Ecuadorian female with no known past medical history was seen for fever, abdominal pain, nausea, and diarrheas. She had been experiencing intermittent right upper quadrant pain, which was non-radiating and unrelated to food ingestion. She also complained of associated fever, nausea, and watery, non-bloody diarrhea for two months' duration. Her review of systems was negative except for an unintentional weight loss 15 pounds with a decrease in her appetite. On physical examination, she was tachycardic with a heart rate of 110 bpm. The abdomen was soft, tender to palpation at the right upper quadrant. Her liver function tests (LFTs) revealed elevated aspartate aminotransferase (AST: 415 U/L), elevated alanine aminotransferase (ALT: 201 U/L), elevated alkaline phosphatase (ALP: 763 U/L), low albumin (2.6 g/dl), normal total bilirubin (0.9 mg/dl), prothrombin time of 15.1 seconds, international normalized ratio (1.2), and partial thromboplastin time (36.0 seconds). Her comprehensive metabolic panel is presented in Table 1. Complete blood count revealed white blood cells of 3.0 x 10^3/mm^3 with differential of 96% segments, 0% bands, 2% lymphocytes, 2% monocytes, 0% eosinophils, and 0% basophils; hemoglobin of 10.8 g/dL; and platelets of 129 K/mm^3. Additional laboratory showed reactive HIV antigen screen, absolute cluster of differentiation 4 (CD4) helper count at 22 cells/µL with a viral load of 72,750 copies/mL, negative blood culture x2, negative stool culture, negative ova, and parasites, negative Clostridium difficile toxin/antigen, and negative cryptosporidium feces antigen. She was deemed a newly diagnosed HIV patient without any significant risk factors except for a blood transfusion in her home country five years before the presentation. She also denied being sexually active for the last four years. She denied any history of alcohol use, smoking, or illicit drug abuse. She had moved from Ecuador to the US at the age of 50 years. She was a housewife and had never worked in a factory or had exposure to chemicals.

A chest X-ray showed no significant findings (Figure 1). Right upper quadrant ultrasound revealed an enlarged liver at 19.6 cm in length and diffusely echogenic consistent with fatty infiltration. Due to the patient’s HIV status and unimproved symptoms, she was started on azithromycin for mycobacterium avium complex (MAC) prophylaxis and trimethoprim-sulfamethoxazole for empiric treatment of suspected Pneumocystis Jiroveci Pneumonia (PJP). Meanwhile, the patient's liver enzyme continued to trend up and a further workup revealed negative viral hepatitis A, B, C, negative antinuclear antibody (ANA), mildly elevated anti-smooth muscle antibody (ASMA) at 30 units, negative ceruloplasmin (34.5 mg/dL), negative Histoplasma antibody, negative cytomegalovirus (CMV) IgM Ab (<30 AU/mL), and negative serum cryptococcal antigen titers. In the second week of hospitalization, her liver enzymes continued to worsen with ALP of 4046 U/L, AST of 407 U/L, and ALT of 276 U/L without any definitive cause. An ultrasound-guided biopsy was performed, and pathology revealed cryptococcal hepatitis with negative acid-fast bacilli and cytomegaloviral stain (Figure 2). On Grocott’s methenamine silver stains, the granulomas showed multiple yeast forms consistent with Cryptococcus (Figure 3). The patient was then started on amphotericin B for 15 days and fluconazole 400 mg for eight weeks with near normalizing in her liver function at the six-week mark. 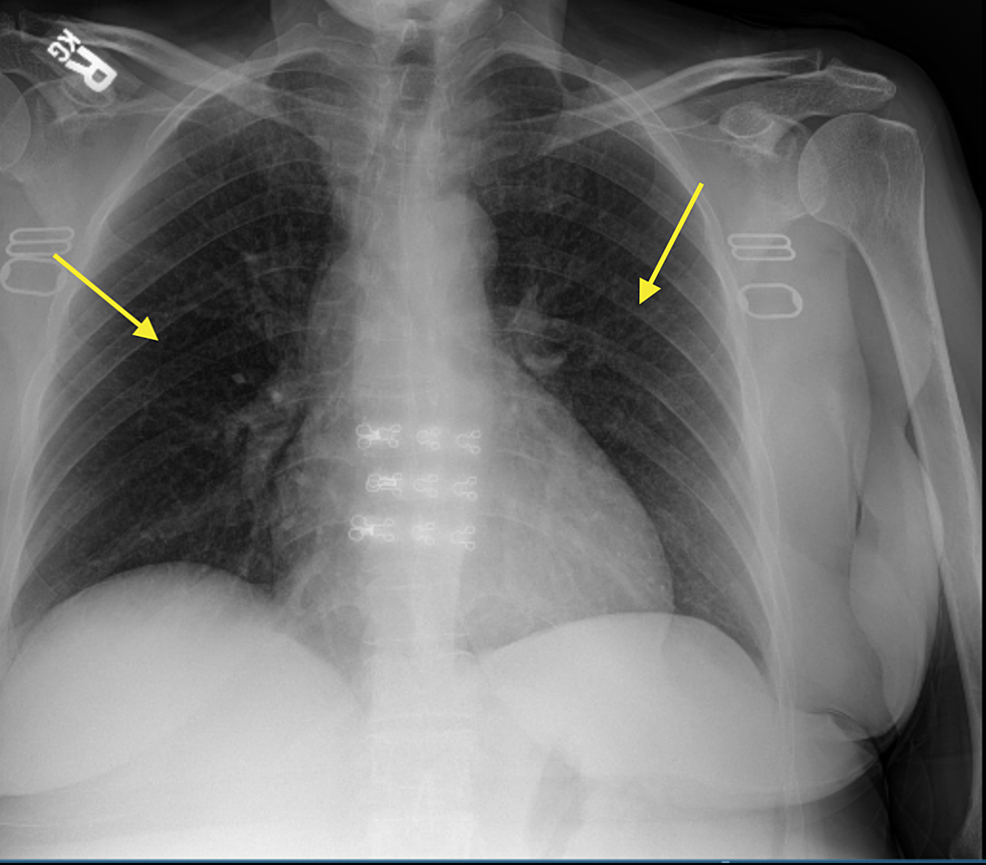 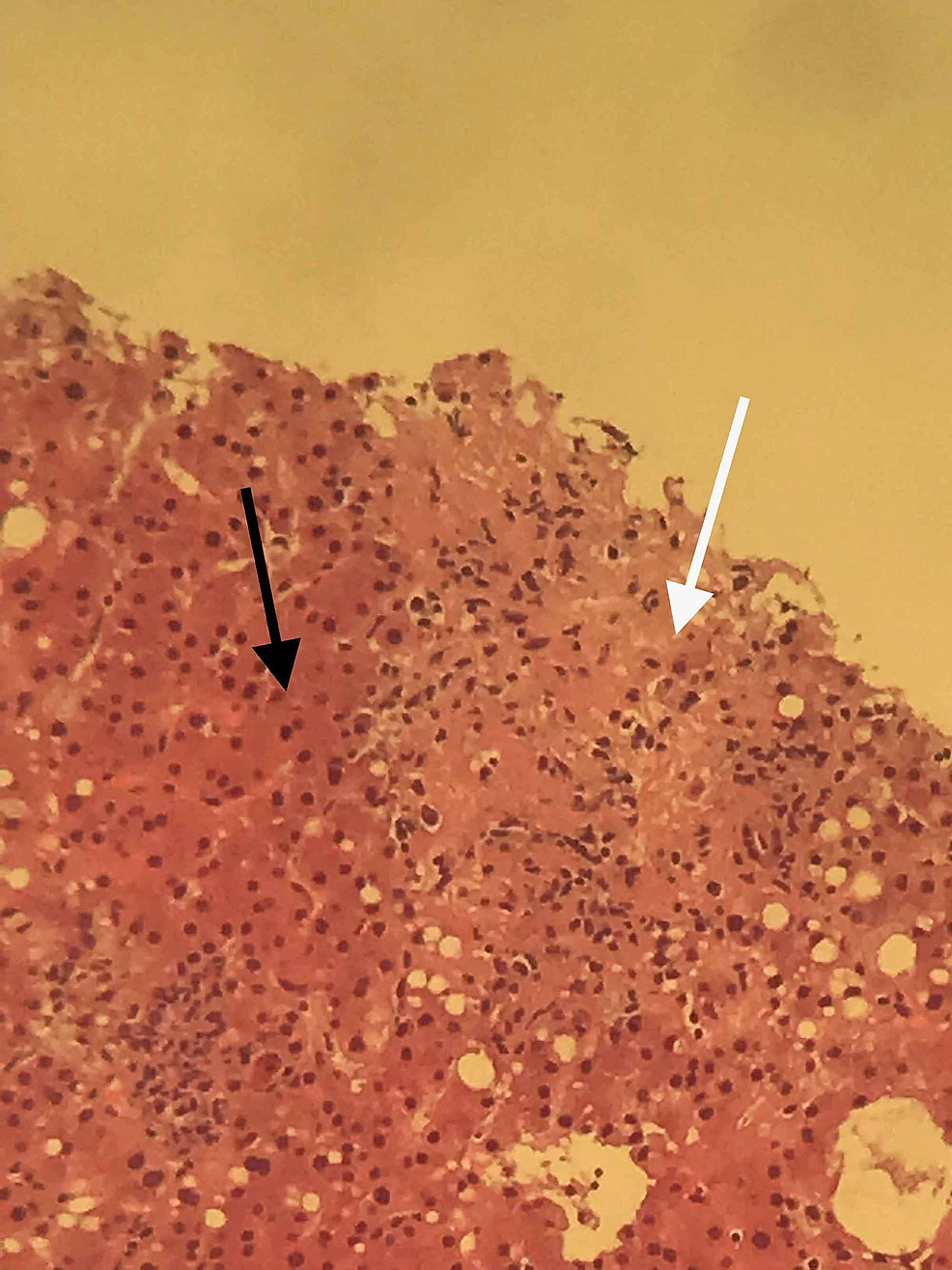 Figure 2: Pathology image of the patient 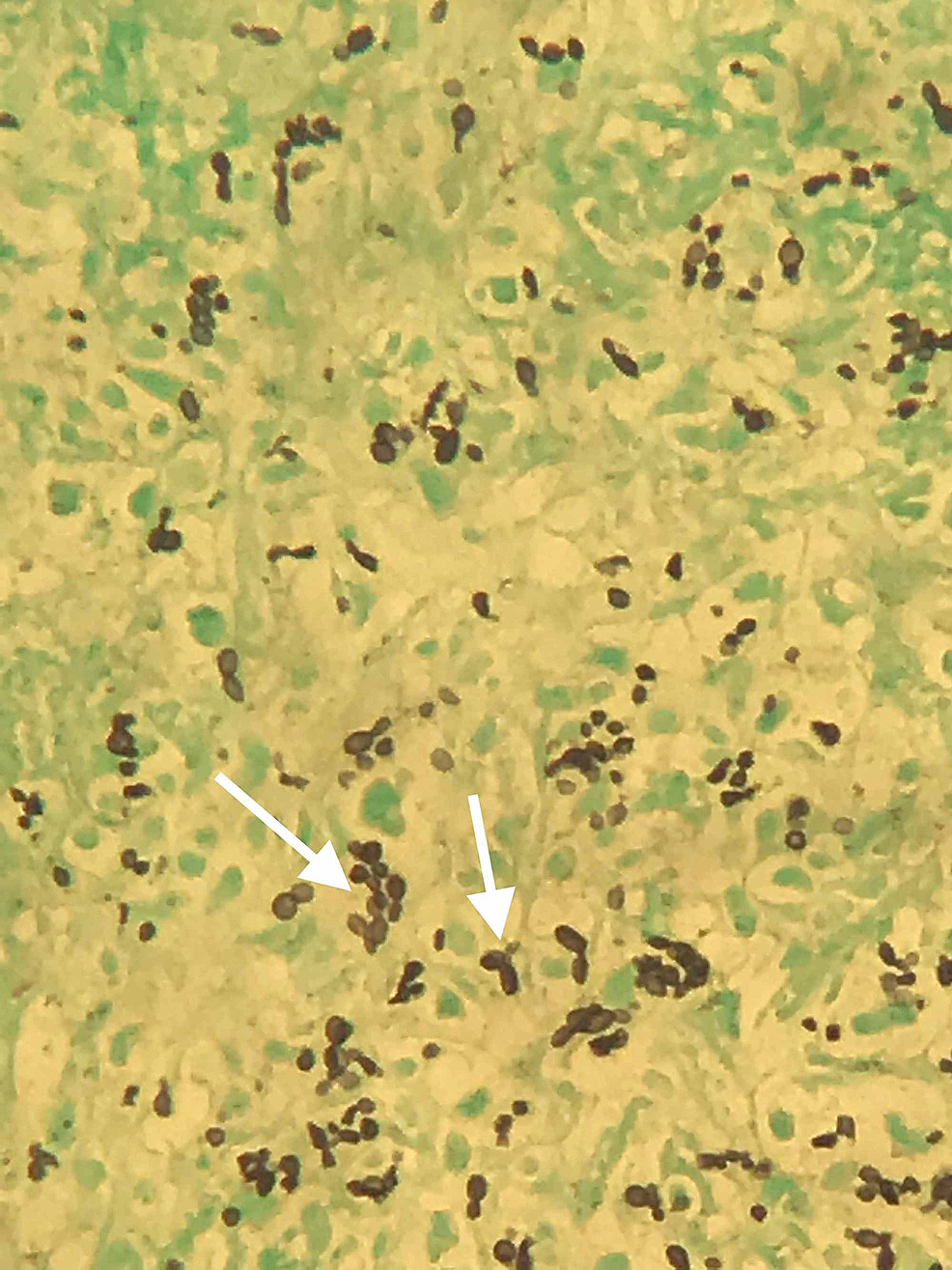 Cryptococcus is an encapsulated yeast-like fungus. There are two variants of Cryptococcus: neoformans and gatti. Cryptococcus neoformans variety is a well-known disease in immunosuppressed individuals. The gatti form occurs in healthy individuals. It is usually acquired by inhalation of aerosolized infectious particles and found in soils contaminated with avian excreta. The spectrum of disease caused by Cryptococcus species consists predominantly of meningoencephalitis and pneumonia, but skin and soft tissue infections also occur; in fact, cryptococcosis can affect any tissue or organ. Patients with hematologic malignancies, advanced HIV infection, and CD4+ T lymphocyte counts of <200 cells/µl, recipients of solid organ transplants, and patients on glucocorticoid therapy have a higher risk for cryptococcal infection. Although serology evidence of cryptococcal infection is common among immunocompetent individuals, the cryptococcal disease is relatively rare in the absence of impaired immunity. However, with the advent of effective antiretroviral treatment, the incidence of acquired immune deficiency syndrome (AIDS)-related cryptococcosis has been sharply reduced among treated individuals. Therefore, most cases of cryptococcosis now occur in resource-limited regions of the world [2-5].

In HIV infection, the liver and biliary tract could be involved with infections mostly mycobacteria and cytomegalovirus, acalculous cholecystitis, sclerosing cholangitis, and neoplasms, mainly Kaposi’s sarcoma. Also, the consumption of HIV-related medications, including sulfa drugs, pentamidine, and ketoconazole can result in abnormalities in LFTs [6]. Several patients with AIDS and cryptococcosis have extra-pulmonary/neural disease. In 19% of these patients, the organism can be found in the liver by histology or culture. Positive cultures are less common in liver tissue (12%) than in blood (32%) or bone marrow (50%). The levels of liver enzymes and bilirubin may be elevated, but the liver involvement is likely to remain asymptomatic [7,8]. In two studies of HIV patients with abnormal liver function tests who underwent a liver biopsy, the first study, which included 635 patients, showed cytomegalovirus count of 4%, mycobacterium avium-intracellulare count of 11%, Cryptococcus neoformans count of 2% and Kaposi sarcoma count of 8.6% [6]. In the second study of 46 patients, cryptococcosis was positive in 13% of all the patients, with one case combining Cryptococcus and mycobacterium tuberculosis in one patient [9]. Interestingly, one case in the literature reported founding a cryptococcal liver abscess in a patient with myelodysplastic syndrome status post-splenectomy [10].

The spectrum of cryptococcosis in HIV-infected patients is so varied and has changed so much since the advent of antiretroviral therapy that a distinction between HIV-related and HIV-unrelated cryptococcosis is no longer pertinent. This case demonstrates the importance of maintaining a broad differential, specifically in immunocompromised patients.

© Copyright 2019
Estifan et al. This is an open access article distributed under the terms of the Creative Commons Attribution License CC-BY 3.0., which permits unrestricted use, distribution, and reproduction in any medium, provided the original author and source are credited.

Figure 2: Pathology image of the patient