Introduction: Females go through a complex hormonal variation once they reach menarche. The menstrual cycle repeats every month regularly and is dependent on the normal functioning of the hypothalamus, pituitary, and ovarian hormones. The overall wellness of the females during the menstrual cycle depends greatly on nutritional status. It is common that women develop menstrual cycle-related symptoms and are routinely prone to thyroid dysfunction. The present study is carried out to assess the activities of Mg and thyroid hormones in pre-, peri-, and post-menopausal women.

Methods: A total of 165 women were recruited in the study after satisfying the inclusion criteria. An equal number of age-matched subjects were included as controls. All the subjects included in the study were selected from the patients attending various out-patient departments of the Prathima Institute of Medical Sciences, Karimnagar, Telangana, India. Blood samples from each subject were collected and analyzed by a semi-automated analyzer for the activities of Mg, and thyroid hormones tetra-iodothyronine (T4), tri-iodothyronine (T3), and thyroid-stimulating hormone (TSH).

Conclusion: From the results of the present study, it can be concluded that the women reaching menopause could suffer from hypomagnesemia and inturn may develop thyroid and other hormonal disorders.

Thyroid hormones play an important role in regulating the basal metabolic rate (BMR) and calorigenesis. The calorigenic control by the thyroid gland is attributed to enhanced mitochondrial metabolism [3]. This causes stimulation of mitochondrial respiration and oxidative phosphorylation, thereby influencing the magnesium (Mg) to regulate the thyroid hormone functions. Mg is a mineral involved in energy-dependent reactions or ATP (adenosine triphosphate) generating reactions. Because of this, Mg is directly or indirectly involved in the regulation of more than 300 enzymatic reactions. The role of Mg in thyroid hormone synthesis could be indirect, i.e., it acts at the iodide uptake step and the deiodination step during the thyroid hormone synthesis [4].

Among the basic elements, the dietary iodine is involved in the synthesis of thyroid hormone. The dietary iodide is oxidized at or near the thyroid gland membrane into more reactive iodine, the free radical of iodine (l-.). Later the l-. binds to the tyrosine molecules and then to thyroglobulin (thyroid protein) to form monoiodothyronine with the help of the thyroperoxidase enzyme. This process also involves sodium-iodide symporter, which in turn requires energy derived from the hydrolysis of ATP, thereby involving Mg, an essential cofactor for ATP generation [5].

The present study aims to assess the activities of serum Mg and thyroid hormones in pre-, peri-, and post-menopausal women.

A total of 165 female patients attending the outpatient departments (OPD) of Medicine, Surgery, and Obstetrics & Gynaecology were enrolled in the study. An equal number of age-matched subjects were recruited as the control group. The cases and the control subjects were categorized into three groups based on their age (≤29, 30-44, and >45 years). All the participants included in the study gave written consent, and the study was approved by the Institutional Ethical Committee (IEC).

The inclusion criteria for the cases included females with complaints of swelling around the neck region, menstrual irregularities, increased weight gain, and clinical thyroid disease. All the patients with hypertension, diabetes, and liver diseases and those who were pregnant were excluded from the study. The subjects with no clinical symptoms of thyroid disease, healthy women, and women with normal menstrual cycles were recruited as controls.

Five milliliters of blood was collected from both the cases and the control subjects. The activities of serum Mg were estimated using a semi-automated analyzer (Photometer 5010) with DiaSys kits. A hormone analyzer supplied by Abbott (Abbott i1000SR Architect Plus) with chemiluminescence/magnetic particle immunoassay (CLIA) methodology was used to estimate the activities of thyroid hormones: tetra-iodothyronine (T4), tri-iodothyronine (T3), and thyroid-stimulating hormone (TSH).

Statistical analysis was performed using Microsoft Excel to derive the mean, standard deviation, and the p-value.

Table 1: The serum activities of Magnesium and the thyroid hormones among the cases and the control group

Table 2: The activities of magnesium and thyroid hormones in different age groups of cases and the control group

Women experience various physiological changes once the menstrual cycle starts [8]. These changes are attributed to hormonal variations. During the menstrual cycle and after the menopause, most women complain of symptoms that range from mild to severe, which may include myalgia, headache, backache, abdominal cramps, bowel disturbances, and others [9]. Also, previous studies have observed that the women reaching menopause, those who have reached menopause, and older women could develop thyroid hormone dysfunction [1]. The mechanisms underlying the symptoms during the menstrual cycles, and the causes of thyroid dysfunctions in peri- and post-menopausal women have not been completely understood.

These observations justify the assumption that the serum Mg activities may be involved in causing the symptoms during the menstrual cycle and also be responsible for thyroid dysfunction in pre-, peri- and post-menopausal women.

Magnesium is an abundant mineral found in the human body along with other essential elements like sodium, potassium, and the calcium which are available and absorbed through dietary sources. The dietary sources that are Mg-rich include nuts, grains, seeds, and leafy vegetables.

Mg is an essential macro element that functions as a cofactor for many enzymatic reactions [10]. It plays a critical role in mitochondrial oxidative phosphorylation and ATP synthesis. Animal experiments proved that the dietary supplementation of Mg significantly increases radioactive iodine uptake by thyroid cells; especially in subclinical hypothyroidism [11]. These findings emphasize that Mg deficiency may lead to decreased uptake of iodine by thyroid cells, thereby causing thyroid hormone disorders.

Mg helps in the balanced secretion of thyroid hormones and also plays a key role in the secretion of the active form of thyroid hormone T3. In a previous study which assessed the relation between Mg and thyroid function revealed that the serum Mg levels decrease in hyperthyroid state and increase during the hypothyroid condition [12]. An increase in the activities of Mg correlated with the thyroid hormone dysfunction, and the patients in such conditions were noted to excrete more Mg in the urine [12].

A previous report had suggested that during the transition from pre, peri, and post-menopausal states, there is a gradual estrogen dominance, which results in an imbalance between the ovarian hormones [13]. The raised estrogen levels in correlation with the progesterone activities cause estrogen dominance. Such a hormonal imbalance was previously attributed to reduced mineral supply, especially the Mg, Se (Selenium), and Iodine [14].

The role of Mg in estrogen dominance could be explained by its ability to clear estrogen from the liver in association with vitamin B6 (Pyridoxine). Mg was found to directly influence the conjugation of estrogen with glucuronic acid to enable its excretion into the bile and from the body. The major symptoms of menopause that include sleeplessness and mood swings were attributed to the role of Mg in tryptophan metabolism, i.e., the formation of serotonin and melatonin. Mg also helps in the balanced secretion of cortisol and progesterone [15].

The decline in the ovarian hormones (estrogen and progesterone) was linked to impaired gastrointestinal motility which in turn inhibits dietary absorption of Mg [16]. Mg is required in the synthesis of gamma-aminobutyric acid (GABA) which functions as a relaxant and helps in resolving stress and sleeplessness in women during and after menopause [17].

Mg modulates neurobiological mechanisms in the human body, including the neurotransmitter system and HPA (hypothalamus, pituitary, and adrenal gland) axis as evidenced from a previous study [18]. This HPA axis is a complex set of interactions between the hypothalamus, pituitary and the adrenal gland which controls the body’s response to stress and regulates the body processes like digestion, immunity, mood, emotions, and energy balance of the body [19].

It was also observed that exhaustion of minerals like zinc, Mg, B complex vitamins, and vitamin C in an adrenal gland may compromise the HPA axis [20-21]. As young females suffer from episodes of mood swings and sudden angriness which coincides with ovulation periods, the same symptoms are shown by the women during their pre-, peri-, and post-menopause age. Thus, it can be concluded that Mg plays a vital role in the regulation of hormonal activities including the thyroid hormones and the HPA axis.

The activities of Mg may, therefore, appear significant in the normal functioning of various hormones that include the thyroid hormones, the sex hormones (estrogen, progesterone), the stress hormone/steroid hormone (cortisol), and the neurobiological hormones (HPA-axis hormones). Also, the Mg acts as a co-factor for various energy-dependent reactions, functions as a detoxicant by carrying out the conjugation of estrogen, participates in tryptophan metabolism that generates serotonin, and melatonin, and helps in the synthesis of GABA, the inhibitory neurotransmitter of the human brain. A schematic representation of the role of Mg in different human biological activities is shown in Figure 1. 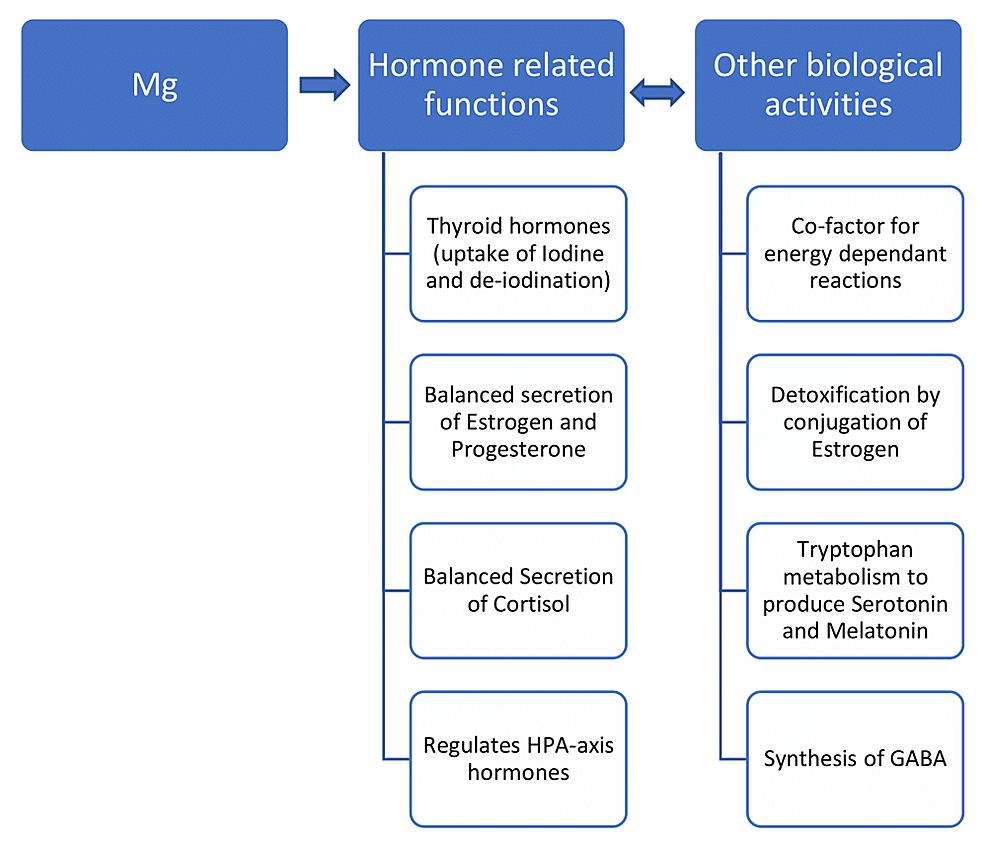 Figure 1: The schematic representation of the role of Mg in different human biological activities

© Copyright 2020
Kolanu et al. This is an open access article distributed under the terms of the Creative Commons Attribution License CC-BY 3.0., which permits unrestricted use, distribution, and reproduction in any medium, provided the original author and source are credited.

Figure 1: The schematic representation of the role of Mg in different human biological activities

Table 1: The serum activities of Magnesium and the thyroid hormones among the cases and the control group

Table 2: The activities of magnesium and thyroid hormones in different age groups of cases and the control group