Percutaneous approach for valvular heart disease is accepted as a safe and feasible strategy to treat patients considered at high surgical risk with aortic stenosis and mitral regurgitation. Additionally, the growing experience led to the increasing use of transcatheter aortic valve implantation in several indications, such as in pure aortic regurgitation. The authors present the case of a 72-year-old woman with prohibitive surgical risk due to several comorbidities, including a chronic arterial dissection from the right carotid artery to the femoral arteries bilaterally that presented with signs and symptoms of heart failure, having a transthoracic echocardiography that showed severe functional mitral and aortic regurgitation. Combined percutaneous intervention for multivalvular disease in this clinical scenario is challenging, and the reported experience is still scarce and limited to inoperable patients.

Experience with percutaneous valvular intervention has been steadily increasing, allowing operators to use this technology in different clinical scenarios [1,2]. A few series report the feasibility of double (concomitant or sequential) aortic and mitral valve intervention, although the performance of both procedures in the same patient has only been sporadically proposed [3-6]. Also, although feasibility has been demonstrated, pure aortic regurgitation (AR) poses a challenge on transcatheter aortic valve implantation (TAVI) due to the absence of annular or leaflet calcifications required for secure anchoring of transcatheter heart valves, increasing the risk of dislocation [7]. Despite the fact that these patients have been excluded from clinical trials, when deemed at high or prohibitive surgical risk they may still benefit from a percutaneous approach [8]. 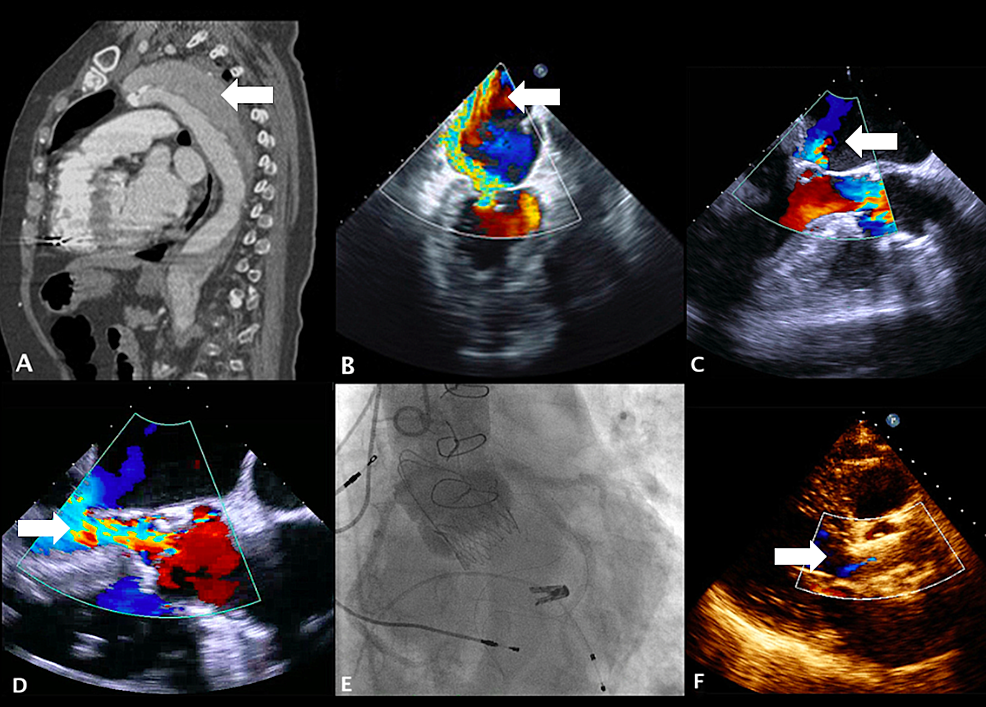 Concomitant aortic and mitral regurgitation are poorly tolerated by patients, because of the severe volume overload, with severe LV dilatation and loss of the protective mechanism of premature mitral valve closure, that would otherwise limit the amount of backward flow to the left atrium and pulmonary veins caused by AR. These patients have a high incidence of postoperative LV dysfunction and reduced postoperative survival [9].

It has been shown that high surgical risk patients benefit from valvular percutaneous approaches [1,2]. A few series report the feasibility of double aortic and mitral valve intervention, although the performance of both procedures in the same patient has only been sporadically proposed [3-6]. Kische et al. reported the experience of 254 patients referred for TAVI; 17 patients had pre-procedural severe MR and 12 of them were subsequently submitted to mitral valve repair with the MitraClip device due to exacerbation of heart failure symptoms. The procedural success was 100%, without major adverse events or 30-day mortality. There was a significant improvement of NYHA functional class (3.5±0.5 to 1.8±0.6; p<0.0001) and an overall increase in walking distance in six-minute walk tests (181.6±98.3 to 382±76.1 m; p<0.01). All patients remained with MR≤1+ and prosthetic aortic insufficiency ≤1+ [3].

Usually, aortic valve is the first to approach in order to reduce left ventricle overload and consequently the functional component of the MR. In this case, initially we assumed that approaching the latter would be safer and could improve the clinical status of our patient, considering also the off-label indication of TAVI for AR. TAVI with either balloon-expandable or self-expandable prosthesis are established therapeutic options for severe aortic stenosis in high surgical risk, and are being increasingly used in the intermediate profile as well [10]. Patients with symptomatic severe pure AR have poor prognosis and should be offered surgical aortic valve replacement. When deemed of high surgical risk, it may be considered the benefit of off-label transcatheter-based therapy [7,11,12], but experience with TAVI for pure AR is limited and has been considered a contraindication for this procedure. The aortic anatomy in native AR patients is often challenging, because they lack annular or leaflet calcification, with the associated risk of insufficient anchoring and valve dislocation [7]. On the other hand, AR often coexists with dilated aortic root or ascending aorta. For this reason, multimodality imaging during pre-procedure planning is of major relevance to accurately measure aortic annulus dimensions and characterize the aortic root morphology. Self-expandable valves offer high and permanent radial forces and have been thought, therefore, to be better suited for treating AR. Roy et al. used a self-expandable CoreValve prosthesis (Medtronic, Minneapolis, MN) in a total of 43 patients with AR. In their series, final implantation was performed in 42 patients. Valve Academic Research Consortium-defined procedure success for TAVI of 74.4% and 18.6% required a second valve due to residual AR. Residual AR≥2+ was reported in 21% [13].

Seiffert et al. evaluated a second-generation self-expandable device (JenaValve, Munich, Germany) in 31 patients, reporting successful implantation in all cases without any major adverse events. The JenaValve is now the only TAVI device with extended CE mark approval for the treatment of high-risk or inoperable patients with severe AR [15].

Wendt et al. evaluated the transapical ACURATE TA device in eight patients, because it offered tactile feedback and came with the feature of self-positioning at a supra-annular level. The procedure was successful in all patients, without complications and post-procedure AR grade I+ or lower was present in all eight patients [8].

In this case, we decided for the Symetis ACURATE TA device in our patient because of a persisting dissection in the descending aorta that prohibited a transfemoral approach, the existing evidence of the safe anchoring of this device in noncalcified aortic annuli and the successful previous experience in treating another patient with the same valve system.

This case of a high surgical risk patient shows the feasibility of combined percutaneous intervention for mitral and aortic valve disease, even in patients with off-label indications for transcatheter-based therapy, such as those with severe pure AR. The experience in this case is still scarce and limited to inoperable patients, but as shown recently, patients with off-label indications who were excluded from the trials may have a benefit from the percutaneous approach. Randomized trials and longer follow-up periods are needed to establish a definitive role of TAVI in AR.

© Copyright 2020
Guerreiro et al. This is an open access article distributed under the terms of the Creative Commons Attribution License CC-BY 3.0., which permits unrestricted use, distribution, and reproduction in any medium, provided the original author and source are credited.