To investigate the effects of non-alcoholic fatty liver disease on aminotransferase (ALT) levels and transient elastography in patients with chronic hepatitis B (CHB).

A cross-sectional study of 230 patients with CHB and ALT levels up to two times the upper limits of normal, of one-year duration, from June 2018 to May 2019. The demographic, clinical, and laboratory characteristics of each patient were collected. Transient elastography was performed to evaluate controlled attenuation parameter (CAP or steatosis) and liver stiffness (fibrosis).

A significant number of patients with CHB with mildly elevated ALT levels are overweight, have significant steatosis and fibrosis, but low HBV DNA levels. This aspect is important while making decisions regarding hepatitis B treatment.

Chronic hepatitis B (CHB) and nonalcoholic fatty liver disease (NAFLD) are two of the most prevalent liver diseases worldwide. About 248 million patients worldwide have CHB [1]. It is estimated that 25%-30% of CHB patients have a coexisting NAFLD [2-3]. Liver biopsy remains the gold standard to diagnose NAFLD, but it is invasive and should be considered in patients with NAFLD who are at increased risk of having steatohepatitis and/or advanced fibrosis [4]. Consequently, more attention is being given to non-invasive imaging studies and markers for the assessment of NAFLD, including ultrasound, transient elastography, and so on.

There are patients who have a concurrent CHB virus infection and NAFLD, which can cause a clinical dilemma regarding different clinical management for these two conditions, as the association between chronic hepatitis B virus (HBV) infection and fatty liver is incongruous. The aim of this study is to find out the role of NAFLD and its effect on transaminase levels and elasticity in chronic hepatitis B patients.

In this cross-sectional study, subjects were recruited through a non-probability consecutive sampling technique. The duration of the study was one year, from June 2018 to May 2019. The sample size was calculated as Huanhuan Yang et al. did [7]. Adult patients of both genders with chronic hepatitis B, age between 18 and 70 years, with positive hepatitis B surface antigen (HBsAg) documented for at least six months and transaminases of up to two times the upper limit of normal, were recruited. Those with autoimmune liver disease, drug-induced liver injury, alcoholic fatty liver disease, viral liver disease, and contraindications to transient elastography examination (e.g., ascites, non-healing wounds in the upper-right quadrant of the abdomen, pregnancy, etc.) or unpredictable CAP measurements (e.g., success rate less than 60% or interquartile range (IQR) <30) [8] were excluded from the study. Those who fulfilled the criteria for antiviral treatment were treated according to standard international guidelines. 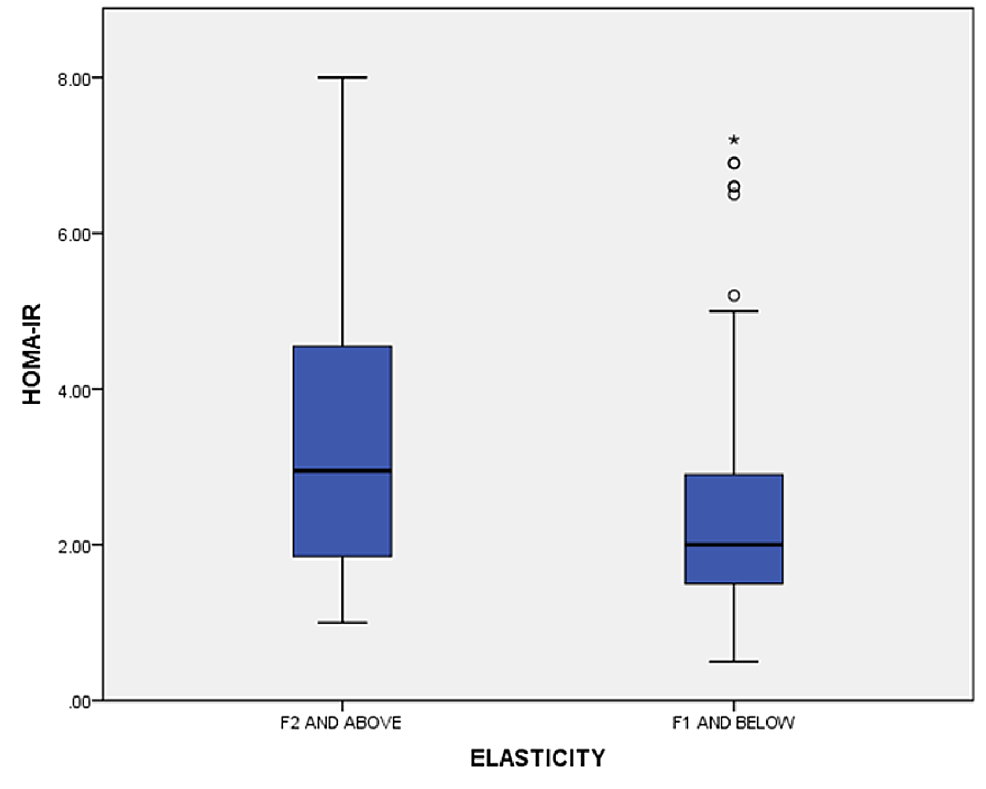 The Fibrotouch® Diagnostic system (HISKY Medical Technologies, Beijing, China) was used to capture both the ultrasound-controlled attenuation parameter (UAP/CAP) for steatosis and the liver stiffness measurement (LSM) values for elasticity and fibrosis simultaneously. Attenuation parameter values and LSM values were measured in units of decibels per meter (dB/m) and kilopascal (kPa), ranging from 100 to 400 dB/m and 2.5 to 75 kPa, respectively.

The data were analyzed by Statistical Packages for Social Science version 21 (SPSS Inc., Chicago, IL). Mean and standard deviation were computed for continuous variables and analysis was performed by the Student t-test or Mann Whitney test. Frequency and percentage were computed for categorical observations and analysis was done by using Chi-square, or Fisher’s exact tests, as appropriate. The correlation was assessed by the Pearson correlation coefficient. A step-wise linear regression analysis was performed to identify independent variables associated with elasticity and steatosis. A two-sided p-value of less than 0.05 was considered statistically significant.

Data are shown as numbers (percentage), or mean ± standard error of mean.

Data are shown as number, percent, and mean ± standard error of mean.

There are conflicting studies of hepatitis B associated with NAFLD. Most commonly, it reflects the metabolic profile of the affected individual. In our study, 161 (70%) patients were overweight (BMI 25 or more). Patients with elevated ALT of more than 35 were 166 (72.2%) and 143 (62.2%) had moderate to severe liver steatosis as determined by the controlled attenuation parameter. A population-based Chinese cohort study underscored the importance of metabolic factors as a cause of NAFLD in hepatitis B and excluded any possible relationship between viral factors and NAFLD but observed that in a subgroup of subjects with concurrent type 2 diabetes mellitus, detectable HBV DNA levels were negatively associated with the development of NAFLD (HR, 0.37; 95% CI, 0.14‐0.98) [11]. Peng D, by using liver biopsy as a tool, concluded that apart from metabolic factors, the hepatitis B virus indirectly facilitates the development of steatosis, as there existed a correlation between ALT levels, HBV DNA, and steatosis [12]. A large Chinese cohort analysis also alluded to the significance of metabolic factors for the development of steatosis but incidentally found that the majority of the study subjects were HBeAg positive with no clear association with fatty liver [13]. Our study did not find any significant association between liver steatosis and HBV viral load.

Ultrasound for the assessment of fatty liver has significant intra- and inter-observer variability [14]. CAP can be used in place of liver biopsy along with the metabolic panel to quantify liver fat. A meta-analysis connoted that CAP showed a significant correlation with steatosis on biopsy and BMI; BMI being a confounding factor [15]. One study implied that inflammation or fibrosis did not affect CAP values [16]. Another study revealed that severe steatosis, defined as a CAP value of more than 280 dB/m, is associated with severe fibrosis in patients with chronic hepatitis B [17]. Liver stiffness measurement seems superior to the biomarker panel for liver stiffness evaluation but augmented inflammation evidently, as raised ALT may lead to falsely elevated stiffness values grading fibrosis [18]. Our multivariate analysis showed that weight, HOMA-IR, elevated ALT levels of more than 35, and significant fibrosis of F2 or more were independently associated with CAP. NAFLD represents a common cause of mildly elevated ALT levels [19]. We wanted to see the impact of NAFLD on chronic hepatitis B and only those patients were included who had elevated ALT up to two times the upper limit of normal. Our analysis revealed that ALT strongly correlated with steatosis of CAP 2 or more (p-value=0.003, OR=1.72, 95% CI: 1.21-2.45). Multivariate analysis also showed ALT of 35 or more as an independent factor associated with steatosis.

A study suggested the potential suppressing effects of steatosis on viral replication [20]. Analogously, a large Korean cohort study implied that the presence of HBsAg was associated with a decreased risk of developing non-alcoholic fatty liver [21]. The inverse correlation of viral load with controlled attenuation parameter (Pearson correlation -0.114) could not reach a statistically significant value (p=0.086) in our analysis.

Physical parameters need to be inculcated in the assessment of NAFLD-hepatitis B, as increased BMI has been seen to delay improvement in fibrosis stage in chronic hepatitis B patients under treatment [22]. Concomitant metabolic syndrome also augments the progression of liver fibrosis irrespective of viral infective markers [23]. Moreover, fatty liver in chronic hepatitis B patients is an independent risk factor for hepatoma development, increasing the risk by 7.3 fold as revealed in a retrospective cohort [24]. Along with the development of hepatoma, liver steatosis is an important factor for mortality in chronic hepatitis B [25]. We found a strong association of liver steatosis and elasticity with important factors related to metabolic syndrome.

Insulin resistance is one of the key pathophysiological mechanisms in metabolic syndrome. An Indian study concluded that insulin resistance, as calculated by HOMA IR, is found to be significantly higher among hepatitis B subjects with fatty liver, also showing serum triglyceride levels as an independent factor for steatosis development [26]. Similarly, a large Korean study demonstrated that insulin resistance is associated with chronic hepatitis B virus infection as detected by HOMA-IR and other methods, without any previous history of diabetes mellitus [27]. Wang CC et al. concluded that chronic HBV infection did not seem to be associated with insulin resistance or hepatic steatosis in HBV carriers [28]. Moreover, insulin levels happen to be associated with advanced liver fibrosis [29]. Our paper analyzed the effects of serum insulin and HOMA-IR on liver steatosis, HBV DNA levels, and liver elasticity. Both parameters showed a statistically significant association with elasticity and CAP values but no relationship was found with the HBV viral load.

Diabetes and hepatitis B is another avenue for research. A large cohort study elucidated that those patients with chronic hepatitis B who developed diabetes were at increased risk of progression to cirrhosis and associated complications [30]. Subjects with diabetes in our study had relatively higher elasticity values but the effects on other parameters could only be extrapolated with a larger number.

Our study has certain limitations. The impact of NAFLD on the further elevation of ALT beyond two times the upper limit of normal was not addressed in our study. Moreover, liver biopsy was not done in our patients, which is considered the gold standard for the grading and staging of inflammation, fibrosis, and steatosis. Another limitation of our study is its cross-sectional nature. We also did not extrapolate the effects of antiviral treatment on steatosis.

We addressed the effect of NAFLD on different physical and biochemical parameters in chronic hepatitis B. As both liver steatosis and hepatitis B are important risk factors for the development of cancer, it is vital to devise a screening strategy for NAFLD in hepatitis B patients in the wake of the rising prevalence of metabolic syndrome and NAFLD.

© Copyright 2019
Sharif et al. This is an open access article distributed under the terms of the Creative Commons Attribution License CC-BY 3.0., which permits unrestricted use, distribution, and reproduction in any medium, provided the original author and source are credited.

Data are shown as numbers (percentage), or mean ± standard error of mean.

Data are shown as number, percent, and mean ± standard error of mean.