Light-chain (AL) amyloidosis is a systemic disease capable of damaging virtually all body tissues. Neurologic involvement is commonly manifested by dysautonomia and peripheral nervous system affection. However, from 1970 to 2018, only 12 cases of cranial nerve injury associated with AL amyloidosis were identified.

Persistent facial nerve paralysis should be considered as a rare initial manifestation of AL amyloidosis allowing an earlier diagnosis.

Light-chain (AL) amyloidosis is a hematologic disorder characterized by deposition in tissues of light-chain fibrils of immunoglobulin, most commonly of the lambda isotype, that cause organ damage. Although it is closely related to multiple myeloma, most patients have ≤20% of plasma cells in the marrow [1]. AL amyloidosis is the most common type of systemic amyloidosis, with an estimated incidence of nine cases/million inhabitant/year. The average age of diagnosed patients is 65 years and less than 10% are under 50 years old [2].

Clinical findings of AL amyloidosis include proteinuria with possible progression to nephrotic syndrome, hepatomegaly with elevated liver enzyme levels, macroglossia, purpura with periorbital distribution (raccoon eyes), bleeding diathesis, and, in advanced stages, right-sided heart failure due to restrictive cardiomyopathy [2]. Neurologic manifestations are also well recognized, usually presenting with the involvement of the peripheral nervous system with symptoms of numbness, paresthesia and pain, and dysautonomia with the occurrence of orthostatic hypotension [3]. Involvement of cranial nerves has been only occasionally reported [4]. In a literature review conducted on PubMed, from 1970 to 2018, only 12 cases of cranial nerve injury associated with AL amyloidosis were identified [4-11]. We report here a case of AL amyloidosis presenting initially with facial nerve paralysis.

A previously healthy 61-year-old male patient was admitted with congestive heart failure. Eight months before the admission, he was evaluated for episodes of lipotimia manifested while walking. At this point, the patient had normal blood tests, except for an elevated erythrocyte sedimentation rate (ESR) of 51 mm/h. A chest radiography, a holter, and a cardiac ultrasound were also normal. Three months later, he presented with left peripheral facial paralysis which was assumed to be idiopathic, after excluding vascular, infectious, and autoimmune causes. Two months later, he complained of dyspnea during progressively shorter walks and developed lower limbs edema. These symptoms were aggravated in six weeks before admission to an Internal Medicine ward for investigation.

In the initial observation at the hospital, he presented with hypotension (94/58 mmHg), exuberant peripheral edema, jugular venous distention, periorbital purpura, and maintained left peripheral facial paralysis. Pulmonary auscultation and percussion were suggestive of voluminous right pleural effusion (Figure 1), confirmed by chest radiography which led to a diagnostic and therapeutic thoracentesis, with a drainage of 1.5 L of pleural liquid compatible with transudate. 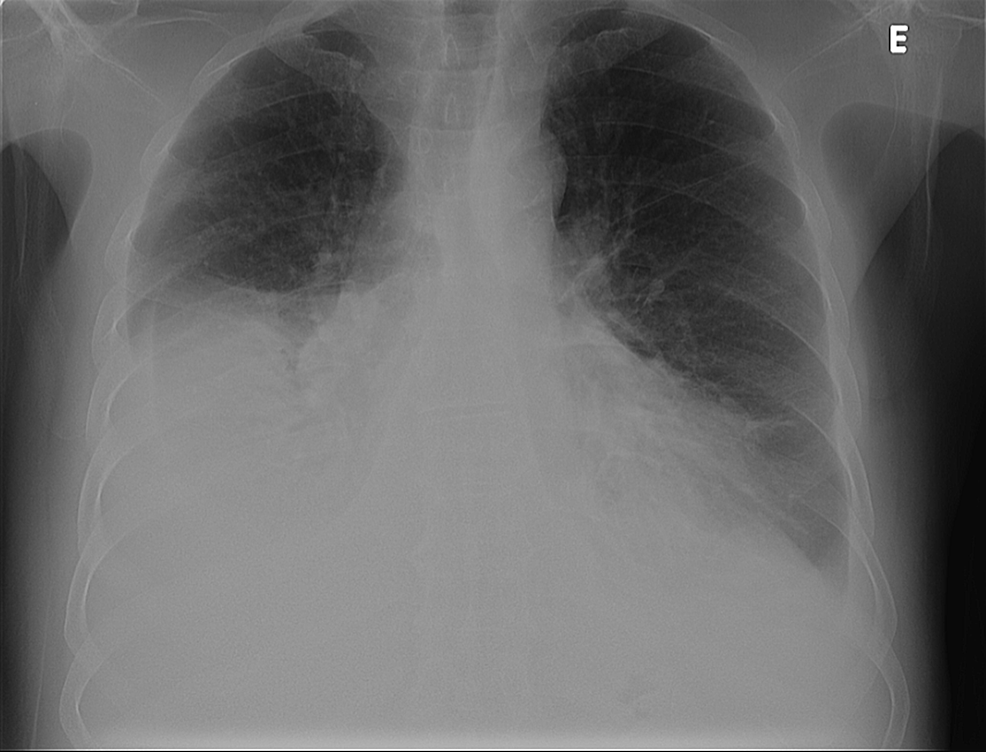 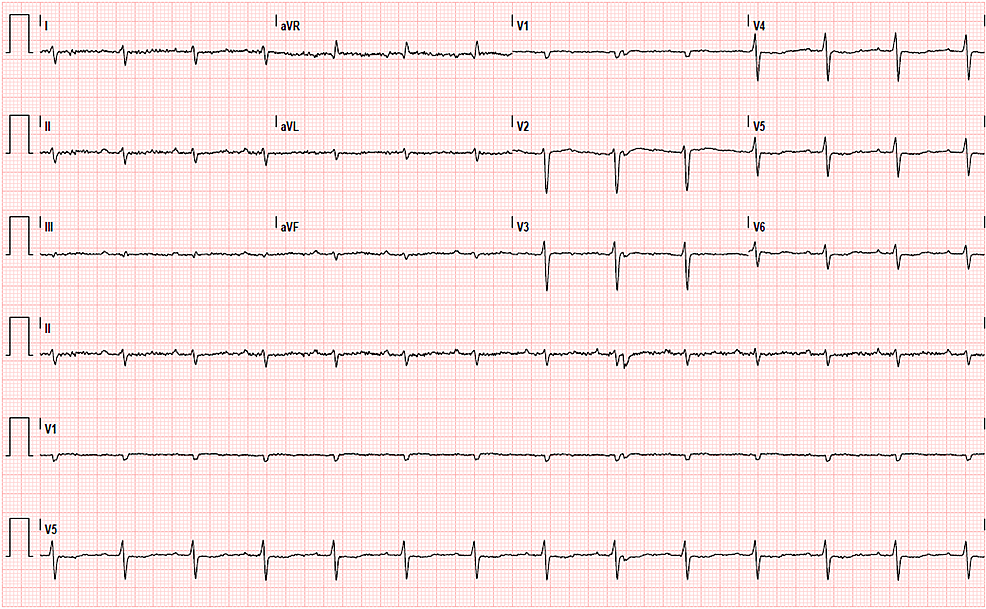 During the investigation, the patient initiated treatment for symptomatic heart failure with diuretics (furosemide) and ivabradine with slight symptom improvement. Angiotensin-converting enzyme inhibitor and beta-blocker were not tolerated due to hypotension.

A chemotherapy protocol for AL amyloidosis was initiated using cyclophosphamide, bortezomib, and dexamethasone (CyBorD), but cardiac disease progressed with a further elevation of NT-BNP (55,250 ng/mL) and the need of supplementary oxygen and vasopressor therapy, leading to death from cardiogenic shock two months after diagnosis.

This case illustrated well the classic cardiac manifestations of AL amyloidosis as well as its dysautonomic expression, and exhibited the particularity of an early cranial nerve involvement, namely peripheral facial paralysis, which is an extremely rare manifestation [4]. Peripheral facial nerve paralysis was attributed to nerve amyloid involvement considering that autoimmune, vascular, and infectious causes were excluded. Moreover, the patient fulfilled all the other criteria for AL amyloidosis, namely the presence of elevated plasmatic and urinary lambda light chains with increased bone marrow plasmocytes and documentation of amyloid protein in rectal biopsy.

AL amyloidosis is an underdiagnosed and rare cause of cranial neuropathies [4,5]. Out of the 12 cases of cranial nerve involvement associated with AL amyloidosis reviewed in the literature, facial nerve paralysis was described in seven cases [4,6-9]. In the remaining cases, the cranial nerves involved were the olfatory, oculomotor, trochlear, trigeminal, abducens, and hypoglossal [4-7,10,11]. Cranial nerve deficits usually preceded the diagnosis of AL amyloidosis. In our case, the facial peripheral paralysis presented six months before symptomatic heart failure and was the complaint that led to the initial etiologic investigation. In fact, some authors suggest that AL amyloidosis should be suspected when cranial neuropathy is associated with proteinuria or monoclonal gammopathy [4].

In the six cases described by Traynor et al. in which cranial neuropathy was a major manifestation of AL amyloidosis, three of the patients had multiple cranial nerves involvement and two had isolated peripheral facial nerve palsy [4]. The oculomotor, trochlear, trigeminal, and the facial cranial nerves were the most often affected in these cases. All had renal involvement manifested by proteinuria. Jeanning et al. reported a case of a hemorrhagic bullae at the palate and hypotrophy of the side of the tongue due to left hypoglossal paralysis which preceded the diagnosis of AL amyloidosis by two years [5]. Van Gerpen et al. described the first case of amyloidosis involving nasopharynx and multiple cranial nerves manifested by epistaxis [7]. In this patient, peripheral facial paralysis developed five years before diagnosis and monoclonal gammopathy and proteinuria were detected after two years.

Although the patient initially reported orthostatic hypotension, the detailed cardiac and laboratory investigation at that time did not identify evidence of AL amyloidosis. The typical cardiac alterations appeared five months later, namely the presence of diffuse hypokinesia with preserved ejection fraction and diastolic dysfunction in cardiac ultrasound and the elevation of cardiac biomarkers, such as troponin T and NT-BNP. At the time of diagnosis, our patient was considered to be in stage III, because of elevated NT-BNP and troponin values with a difference between involved and uninvolved free light chains (dFLC) of 171 mg/dL, which is next to the proposed cutoff for stage IV (180 ng/mL). According to this staging system, the median overall survival from diagnosis was 14 months, which was more than what we observed in our case [12]. Although dFLC was not in the range of stage IV, NT-BNP was markedly elevated, reflecting the severe cardiac involvement, which is known to predict worse prognosis and, in this case, was responsible for the fatal outcome [1].

When the patient was admitted, there were also laboratory alterations compatible with amyloid deposition in the liver, as expected at this stage of the disease, although these changes could also be explained by hepatic congestion due to right-sided heart failure. In the 12 cases reviewed with cranial nerve involvement, three patients presented altered biochemical parameters of liver function and hepatic amyloid infiltration confirmed by biopsy [4,8,9].

© Copyright 2019
Martins et al. This is an open access article distributed under the terms of the Creative Commons Attribution License CC-BY 3.0., which permits unrestricted use, distribution, and reproduction in any medium, provided the original author and source are credited.