Cite this article as: Abd Elhameed Elsayed W, Ali R A (June 20, 2019) Efficacy of Scintigraphy, Ultrasound and Both Scintigraphy and Ultrasonography in Preoperative Detection and Localization of Primary Hyperparathyroidism. Cureus 11(6): e4960. doi:10.7759/cureus.4960

Objective: The aim of our study was to evaluate the efficacy of preoperative dual-phase 99mTc-methoxyisobutylnitrile (MIBI) parathyroid scintigraphy (PS), and ultrasound (US) in primary hyperparathyroidism (pHPT) diagnosis and compare the results with the surgical findings.

Conclusions: The combination of MIBI and US appears promising for localizing parathyroid pathology in patients with primary hyperparathyroidism. The concordance rate is high together with a lower chance of missing concomitant thyroid pathology, which might alter the surgical approach.

Hyperparathyroidism is a generalized disorder of calcium (Ca), phosphate (P), and bone metabolism caused by increased secretion of parathyroid hormone (PTH). The elevation of PTH usually leads to hypercalcemia, hypophosphatemia, and relative hypocalciuria [1, 2].

In the present study, we highlight the concern regarding primary hyperparathyroidism (PHPT) as its incidence is increasing with a rate of 42:100,000 per year and can reach up to 190:100,000 per year in women over 60 years of age [4].

The size of a normal pararthyroid gland ranges between 40-50 mg and therefore is infrequently visualized; however, when adenoma or hyperplasia occur the size increases up to ten fold and it can be detected in imaging modalities [5]. Since recommended by Coakley et al. in 1989, 99mTc-methoxyisobutylnitrile (MIBI) has gained great popularity in parathyroid imaging among the various subtraction methods such as 99mTc/201Tl, 123I/201Tl, 99mTc tetrofosmin/123I, and 99mTc-MIBI/123I [6-9]. 99mTc-MIBI is a radiopharmaceutical with lipophilic cationic properties, its distribution is initially proportional to blood ﬂow, and once intracellular, it is sequestered within mitochondria most actively in normal cardiac and thyroid cells [10, 11]. The uptake is especially prominent in overactive parathyroid glands, and maximum activity in thyroid gland is reached within five minutes, whereas parathyroid activity is sustained and washout is delayed, allowing the acquisition of the parathyroid glands nearly two hours after injection [12].

In recent years, minimally invasive parathyroidectomy has challenged the traditional bilateral neck exploration for PHPT, with advantages of reducing the rate of early postoperative hypocalcemia, less postoperative pain, and smaller scar [13]. However, this new approach needs a better preoperative imaging to help in localizing the diseased parathyroid gland to help in increasing the success rate of this less invasive surgery. Surgeons and endocrinologists keenly request information about the presence and precise location of the parathyroid glands.

Thus, the aim of the current study was to assess the efficacy of both dual-phase 99mTc-MIBI and US as diagnostic imaging tools for the localization of enlarged parathyroid glands in patients admitted to our department and prepared for parathyroidectomy and compare the results with the surgical findings.

The current study is a retrospective study where US and SC examinations data of 45 operated patients with clinically and biochemically documented 1ry hyperparathyroidism were examined and analyzed. The diagnosis of 1ry hyperparathyroidism was determined based on parathyroid hormone levels, serum calcium and phosphate, in addition to clinical evaluation of the patients, which included taking medical history, physical examination, laboratory tests, neck ultrasonography and 99mTc-MIBI scintigraphy of the neck and upper mediastinum.

All patients underwent a 99mTc-hexakis-2-methoxyisobutylisonitrile (99mTc-MIBI) scintigraphy with the use of a gamma camera. LEHR (low energy high resolution) collimators were used. Images were registered with a 128 × 128 matrix. The 99mTc-MIBI 20-25 mci was injected intravenously; early dynamic images and planar images were obtained 10 minutes after injection, and this permitted diagnosis by observing the differential washout from the thyroid and hyperfuncioning parathyroid. The “late” neck acquisition was performed 120 minutes after 99mTc-MIBI injection. In delayed images, much of the thyroid uptake has washout and the typical finding of hyperfunctioning parathyroid is a focus of residual activity in the neck with a high target to background ratio. Multiple hyperplastic glands may be seen, or in some patients the washout rate of the thyroid and hyperfunctioning parathyroid will be similar. However, often in these cases, the parathyroid adenoma can be seen as a distinct focus with a background of thyroid activity. Although adenomas are commonly detected contiguous to the thyroid or occasionally intrathyroidal, they may be ectopic, anywhere from high in the neck down to the mediastinum.

It was used to assess the location of the parathyroid glands, their size, and echo structure. Cross-sectional and longitudinal images of the anterior region of the neck were also obtained. The bilateral assessment was performed in the region from the common carotid artery bifurcation to the midline and down to the sternum. An attempt to visualize the superior part of the mediastinum was performed using GE Logiq P9 medical system (GE Healthcare, Chicago, IL, USA) using the superficial transducer ML-15.

This study complies with the regional and institutional ethical guidelines and with the Declaration of Helsinki. A written informed consent was obtained from the patients or his/her relatives to participate in the study.

However, ultrasonography and scintigraphy combined showed higher sensitivity, specificity, and accuracy as shown in Tables 1-2.

Parathyroid hormone is the main regulator of calcium homeostasis in the human body. Primary hyperparathyroidism (PHPT) results from the inappropriate overproduction of parathyroid hormone from one or many parathyroid gland(s). It is the third most common endocrine disorder affecting 0.3% of the general population [14-16].

In agreement with an earlier study by Ibrahim and Elsadawy [20], it was shown in the current study that the US has a 94.6% sensitivity. Actually, ultrasonographic sensitivity could be related to the experience of the radiologist, which could explain the variability. 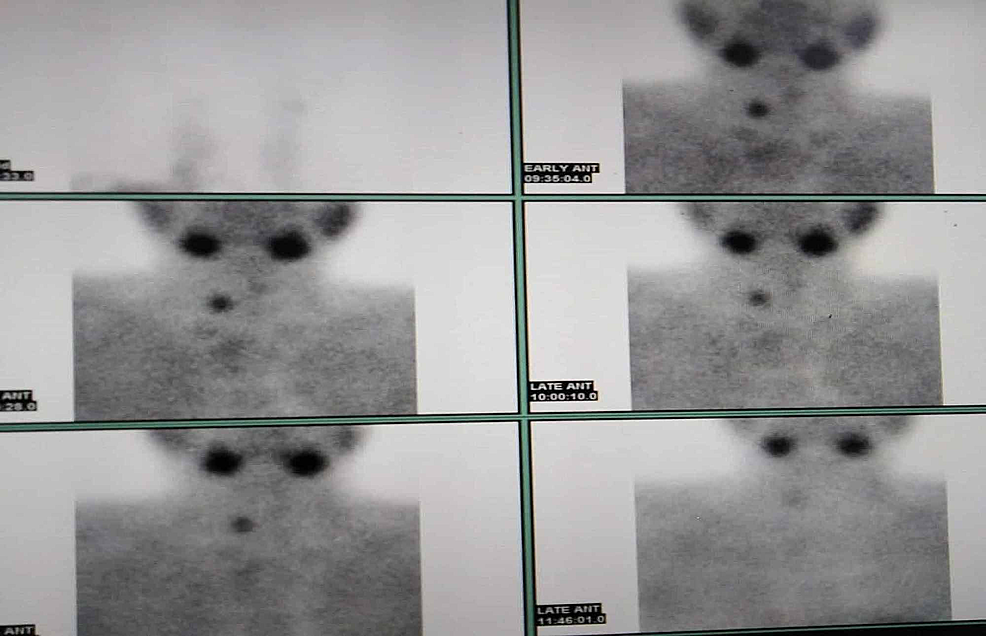 Figure 1: A female patient who complained of bony pains and had a parathormone level of 1045 underwent 99mTc-MIBI parathyroid scintigraphy that showed a rounded area of increased parathyroid activity at the lower right neck (early images) and persisted, becoming more obvious in time, denoting parathyroid adenoma.

In the current study, combined scintigraphy and ultrasound had a higher sensitivity, specificity, and accuracy than either technique alone, which is similar to the results of previous studies that noted improved accuracy, overall specificity, and positive predictive values when both techniques are combined preoperatively [5,8,22-24].

Actually, MIBI provides guidance for the interpretation of US data, especially in the case of ectopic parathyroid glands, small parathyroid adenomas, and concurrent thyroid nodules. US offers detailed anatomic information. It can also be especially helpful in patients with more than one enlarged parathyroid gland. In the majority of cases, the dual utilization of MIBI and US was able to successfully overcome the inherent limitations of each modality when employed alone. This is especially important in patients living in endemic goiter areas and it is important to screen nodular lesions of the thyroid gland as the leading cause of false positive results in both methods.

Human subjects: Consent was obtained by all participants in this study. The Scientific Research Ethics Committee for Sohag Faculty of Medicine, Sohag University, Sohag, Egypt issued approval 893456. Ethical approval of the study was obtained from the ethical committee of the Faculty of Medicine, Sohag University. Written informed consent was obtained from the patients or his/her relatives to participate in the study. Animal subjects: All authors have confirmed that this study did not involve animal subjects or tissue. Conflicts of interest: In compliance with the ICMJE uniform disclosure form, all authors declare the following: Payment/services info: All authors have declared that no financial support was received from any organization for the submitted work. Financial relationships: All authors have declared that they have no financial relationships at present or within the previous three years with any organizations that might have an interest in the submitted work. Other relationships: All authors have declared that there are no other relationships or activities that could appear to have influenced the submitted work.

© Copyright 2019
Abd Elhameed Elsayed et al. This is an open access article distributed under the terms of the Creative Commons Attribution License CC-BY 3.0., which permits unrestricted use, distribution, and reproduction in any medium, provided the original author and source are credited.

Figure 1: A female patient who complained of bony pains and had a parathormone level of 1045 underwent 99mTc-MIBI parathyroid scintigraphy that showed a rounded area of increased parathyroid activity at the lower right neck (early images) and persisted, becoming more obvious in time, denoting parathyroid adenoma.