Materials and methods: A total of 30 patients attending the out-patient clinic of the Department of Periodontology and Implantology, Faculty of Dental Sciences, Sri Ramachandra University (SRU), Chennai, India were recruited for the study. They were categorized in three groups as healthy individuals, individuals with chronic gingivitis, and individuals with chronic periodontitis gingival tissues. nTreg (CD4+ CD25+ Fox P3+) cells were isolated using flow cytometry. Different conjugated, isolated cells were then gated in the order of CD4+, CD25+, and Fox P3+ cells.

Periodontal disease is a multifactorial disease where infection and its sequel, inflammation and immunity, play a critical role in disease pathogenesis [1]. Though the indispensable role of microorganisms leads to the initiation of disease, the progression and severity of the disease are due to the exaggerated host immune response. Periodontal disease is characterized by periods of exacerbation interspersed with periods of remission and is also regarded as a healing lesion. Available evidence suggests T-regulatory (Treg) cells as key anti-inflammatory cells that are critically involved in limiting the inflammatory response [2]. These cells are described as those T cells that have escaped deletion in the thymus and later become anergic or get suppressed by various mechanisms [3]. Treg cells can be defined as a group of T-cell population that functionally suppresses an immune response by influencing the activity of another cell type [4].

A major challenge in immunology and medicine was to determine the unresponsiveness of the adaptive immune system to self-antigens (that is, immunological self tolerance), which is now well established [5]. The immune mechanism has to deal with an array of inflammatory signals during long established infections like chronic periodontitis. There may be self control mechanisms where regulation of effector cells may take place. To assess this control mechanism, our present study was carried out to determine the presence of naturally induced Treg (nTreg) cells in states of gingival health, gingivitis, and chronic periodontitis. 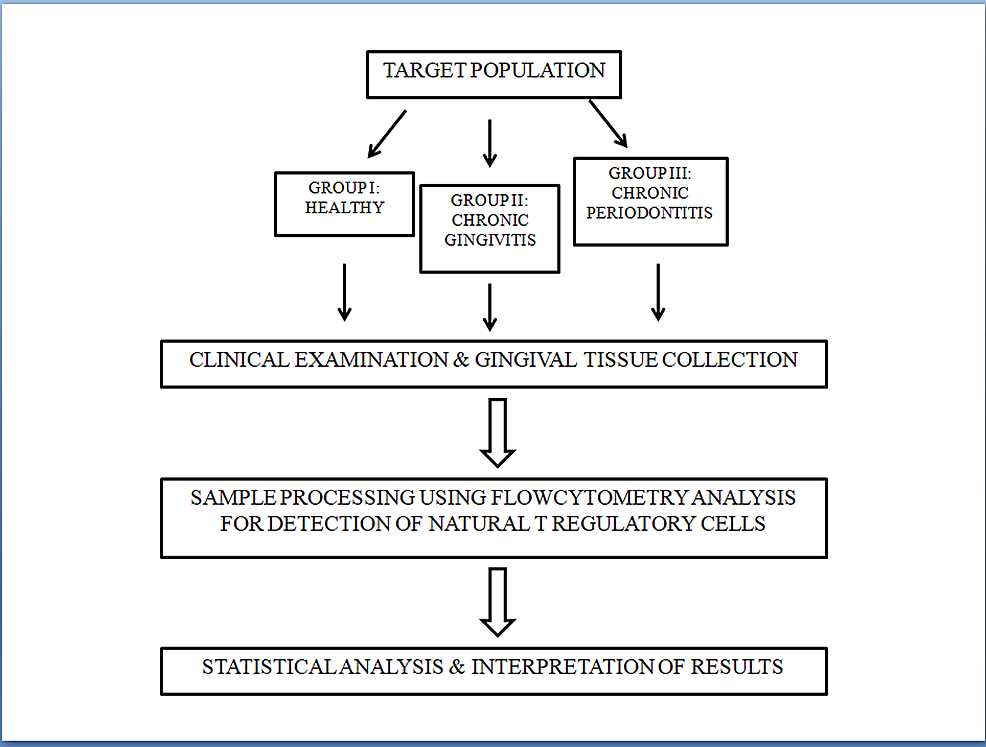 Figure 1: Selection of cases for the study.

The exclusion criteria for all the groups were presence of any systemic disease, use of tobacco in any form, previous history of periodontal therapy, and those who had taken antibiotics or analgesics recently. Pregnant and lactating women were excluded from the study.

The following markers that are specific for regulatory T cells were used in the analysis.

All samples were thawed on ice and mononuclear cell suspensions were prepared using an ultrasonic processor with 100-200 µl of phosphate buffered saline (PBS). The prepared cells were centrifuged at 1500 rpm for three minutes following which the supernatant was discarded. Then 200 µl of PBS was added to the pellet and again centrifuged at 1500 rpm for three minutes.

Thus a final cell pellet was obtained to which 100 µl of PBS, 20 µL of CD4 PECY5, 20 µl of CD25PE, and 100 µl of stain buffer were added. The samples were then incubated on ice for an hour in the dark following which they were again centrifuged. For intracellular staining, a final workable solution of Fox P3 buffer C was obtained by diluting Fox P3 buffer A and B according to the instructions of the manufacturer. 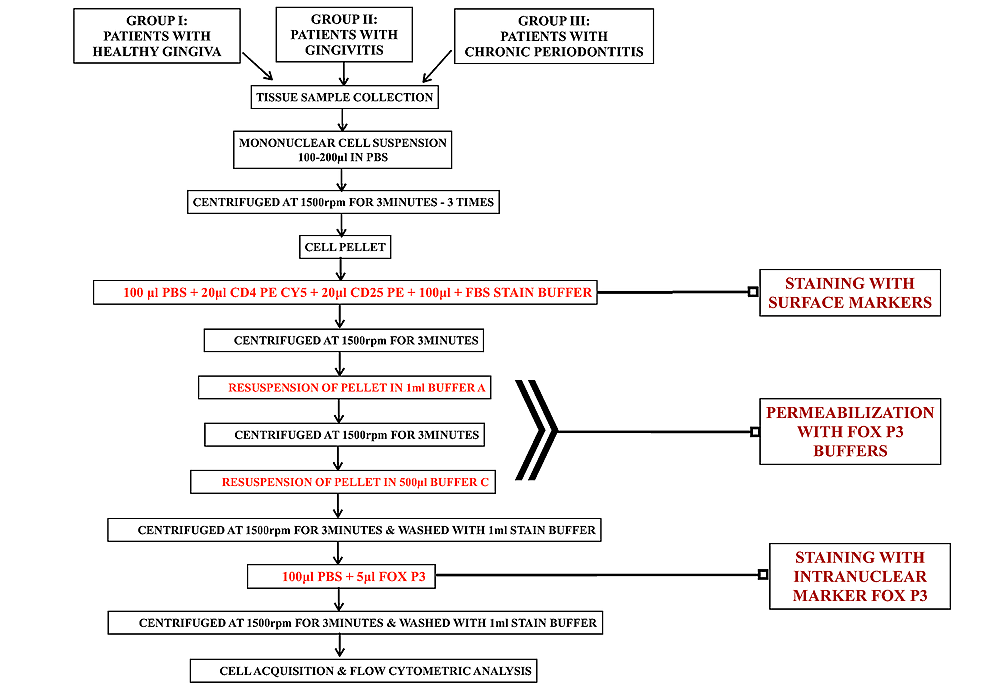 The gating of the cells in the gingival tissue was done for the lymphocyte region and the fluorescence of these samples was compared with the unstained sample. A total of 25,000 cells were acquired from each sample and the proportions of CD4, CD25, and Fox P3 were gated using the software.

A total of 30 individuals were included in this study. They were divided into three groups based on specific inclusion and exclusion criteria as healthy individuals, patients with gingivitis, and patients with chronic periodontitis. The demographic details are summarized in Table 1. There were four females and six males in the healthy group, three females and seven males in the gingivitis group, and two females and eight males in the chronic periodontitis group. The age range of the subjects in the control group was 21-30 years (mean age 24.5 ± 7.74 years), the age range of the gingivitis group was 23-35 years (mean age 27.6 ± 8.72 years), and that of the chronic periodontitis group was 36-58 years (mean age 49.4 ± 15.63 years). The mean Simplified Oral Hygiene Index (OHI (S)) score, probing depth, and clinical attachment level (CAL) are depicted as mean ± standard deviation in Table 1.

All the samples were stained initially for surface markers such as CD4 and CD25 followed by intracellular staining with Fox P3. The cells that co-expressed all the three markers (CD4, CD25, and Fox P3) were quantified as natural Tregs. ANOVA, post hoc test, and T-test were performed to analyze the results. 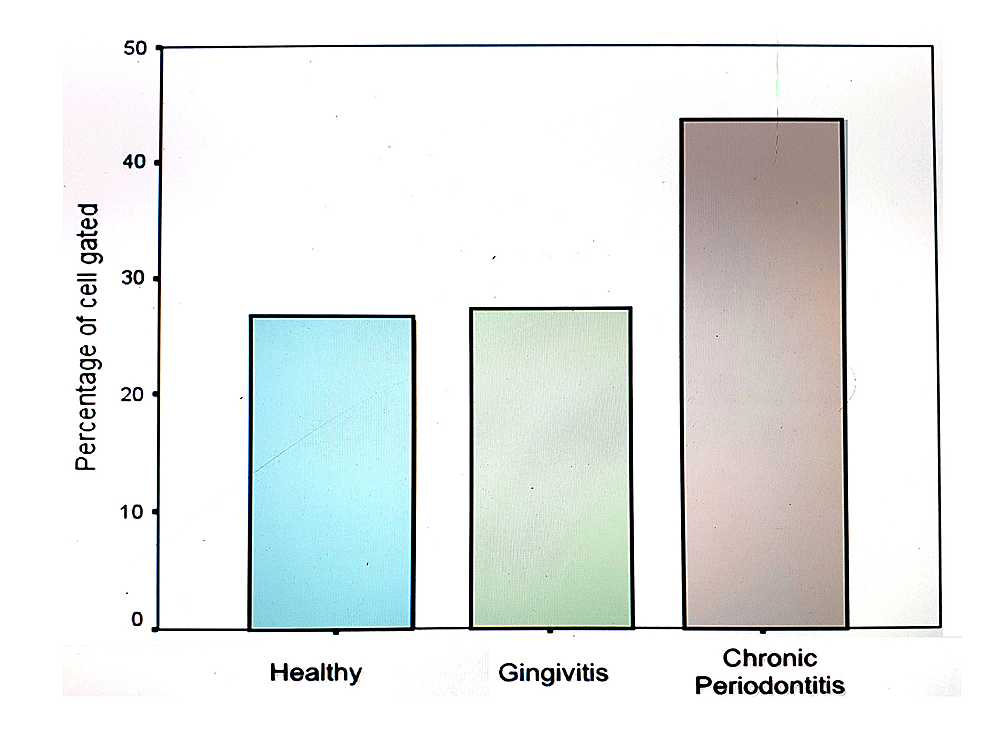 Comparison of mean values of total nTreg (CD4+ CD25+ FoxP3+) cells between the groups in the gingival tissue extracts.

Periodontal disease has inflammation as the basis with many confounding factors and hence is referred to as a multifactorial disease. It is a result of host-microbial interaction where the inflammatory component leads to major destruction. Some clarity has been obtained in the pathogenesis of the disease after decades of research, but it is still far from a clear picture. An immediate acute inflammation, innate immunity, and adaptive immunity are the three different ways a host can respond [7]. A pool of undifferentiated pre-lymphocytes from hematopoietic stem cells after many transitions stay centrally as nTreg cells. These cells after stringent selection reach the peripheral structures. In the periphery they can differentiate into effectors factors or persist as nTregs or can be made more active induced Tregs (iTregs). Of the three, nTreg is the most immunosuppressive followed by iTreg, but the maximum tissue destruction follows effector cells [8].

In the present study we used CD4, CD25, and Fox P3 as markers to isolate nTregs from gingival tissues. Nakajima et al. in 2005 demonstrated an increase of nTregs in chronic periodontitis and gingivitis in comparison to healthy groups. An immunohistochemical analysis of CD4, CD25, and CTLA-4 and gene expression analysis of Fox P3, TGF-beta, and IL-10 in gingival biopsies revealed the presence of nTregs [9].

They suggested that nTreg cells and other regulatory T cell populations exist and play a role in periodontal disease. Similarly, in our present study we showed a significant increase in the nTregs in chronic periodontitis.

Cardoso et al. in their study showed similar increase in nTreg cells in chronic periodontitis and concluded that Treg cells are involved in the modulation of local immune responses in chronic lesions [10].

Ernst et al. carried out studies correlating the levels of double positive cells with 'receptor activator of nuclear factor kappa-Β ligand' (RANKL) and reported that Treg cells are inversely proportional to RANKL levels depicting their role in chronic conditions [11]. Interestingly, RANKL levels are influenced by immune and inflammatory factors. So, probably, if nTregs are less, the local immune response could be more effector cell dominant and more destructive as evidenced by these cells.

The results of our study showed an increase in the proportion of nTregs (CD4+ CD25+ Fox P3+) in the chronic periodontitis group compared to the gingivitis and healthy tissue groups. These values were statistically significant. However, there was a noticeable nTreg cell expression in gingivitis that was not statistically significant. Thus, our study results conclude that nTregs play an important role in the disease progression of periodontitis.

© Copyright 2019
Arul et al. This is an open access article distributed under the terms of the Creative Commons Attribution License CC-BY 3.0., which permits unrestricted use, distribution, and reproduction in any medium, provided the original author and source are credited.

Figure 1: Selection of cases for the study.

Comparison of mean values of total nTreg (CD4+ CD25+ FoxP3+) cells between the groups in the gingival tissue extracts.