Cystic prostatic carcinoma is a rare entity with few cases reported in the literature [4]. Malicow and Pachter were first to describe a case of prostatic ductal adenocarcinoma in 1967 and it was suggested that tumor’s origin was of prostatic utricle (uterus masculinus) having “endometrial features” [5]. Prostatic ductal adenocarcinoma is thought to arise from primary ducts of the prostate with various studies over the last few decades using microscopic, immuno-histochemical and ultra structural methods supporting this article.

In our case report, we represented a 55-year-old man who came to our hospital with abdomen-pelvic complaints such as pain in abdomen and obstruction in urine with few episodes of hematuria and he was further clinically investigated and radiopathologically diagnosed as prostatic ductal adenocarcinoma: a cystic variant of prostatic carcinoma.

A 55-year-old man came to our hospital with complaints of vague abdominal pain, burning micturition, hematuria, increased frequency and urgency of urine, more during night and pain during defecation since four months. He was referred to the urology department where the clinical examination was done including digital rectal examination which revealed an enlarged prostate. Further, more hematological investigations were done with no abnormal findings aside from prostate-specific antigen (PSA) which was mildly raised with a value of 12.4 ng/ml. He had no remarkable medical history.

The patient was further investigated in our radiology department where an abdominal ultrasonography and intravenous pyelography (IVP) was done. On ultrasonography, he was diagnosed with moderate hydroureteronephrosis with chronic cystitis with significant post void urine and increased volume of the prostate which measured approximately (75)cc with grade-III prostatomegaly and a large cystic swelling within prostatic parenchyma. On IVP it was diagnosed as moderate hydroureteronephrosis with significant residual post void urine. 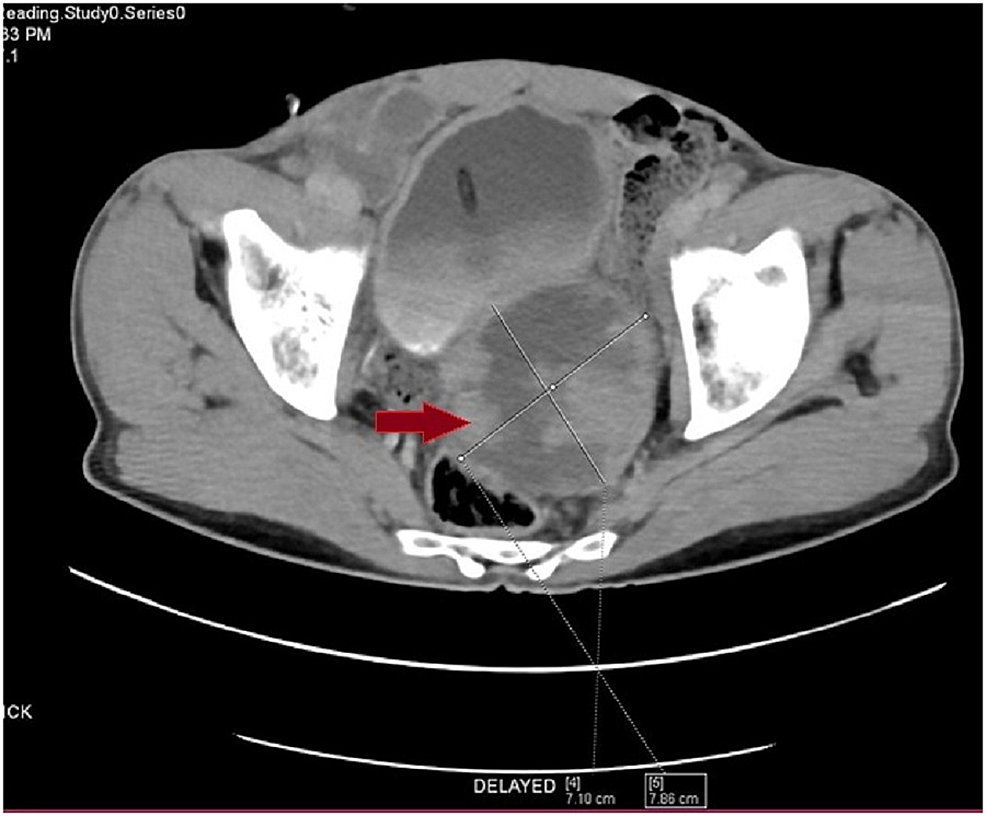 There was also mid circumferential wall thickening of the urinary bladder with few internal iliac lymph nodes as shown in Figure 2. 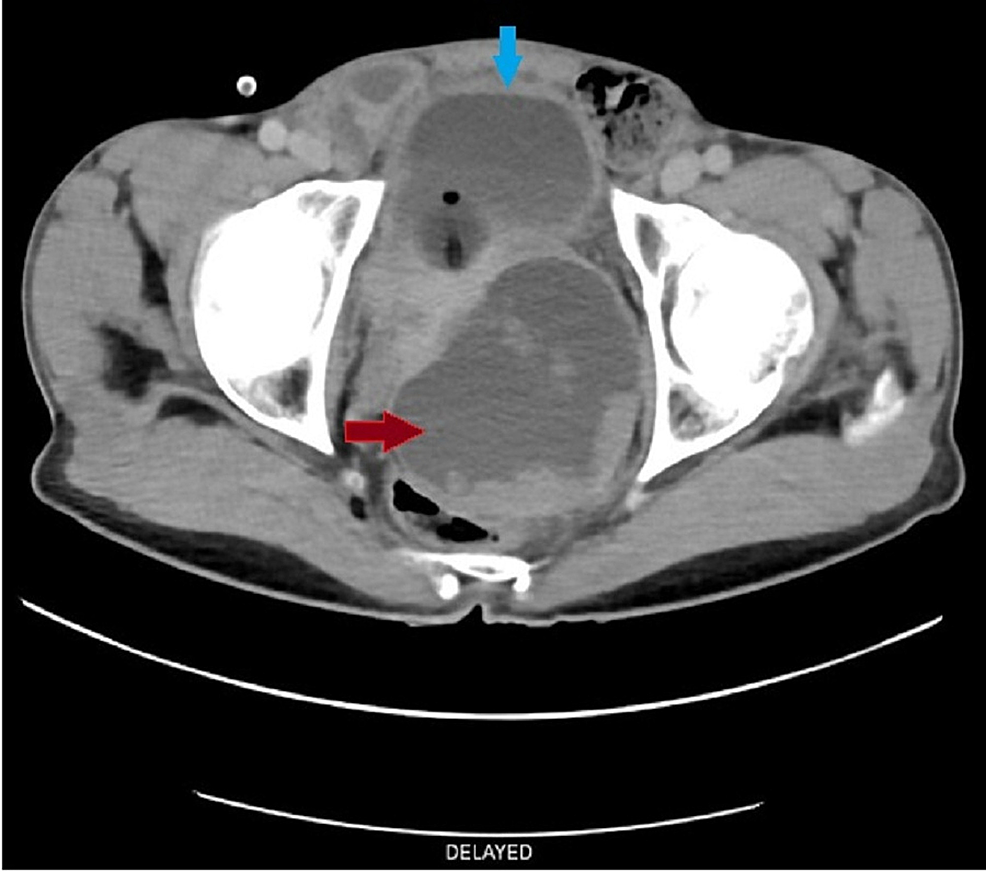 Bone scan and computed tomography (CT) of chest, abdomen, and pelvis were negative for metastasis.

Histological sections from the specimen, as seen in Figures 3-4, consist of 19 out of 22 prostatic transurethral resection of prostate (TURP) chips which showed tumor composed of medium-sized glands with irregular outline and a smooth inner surface and scanty intervening stroma. Ducts were lined by pseudostratified columnar epithelium with abundant amphophilic cytoplasm and intraluminal eosinophilic secretion. Anisonucleosis was seen. On histopathological sections, diagnosis of ductal adenocarcinoma of the prostate was made with Gleason score 5+4=9, grade group V (WHO 2016 classification). 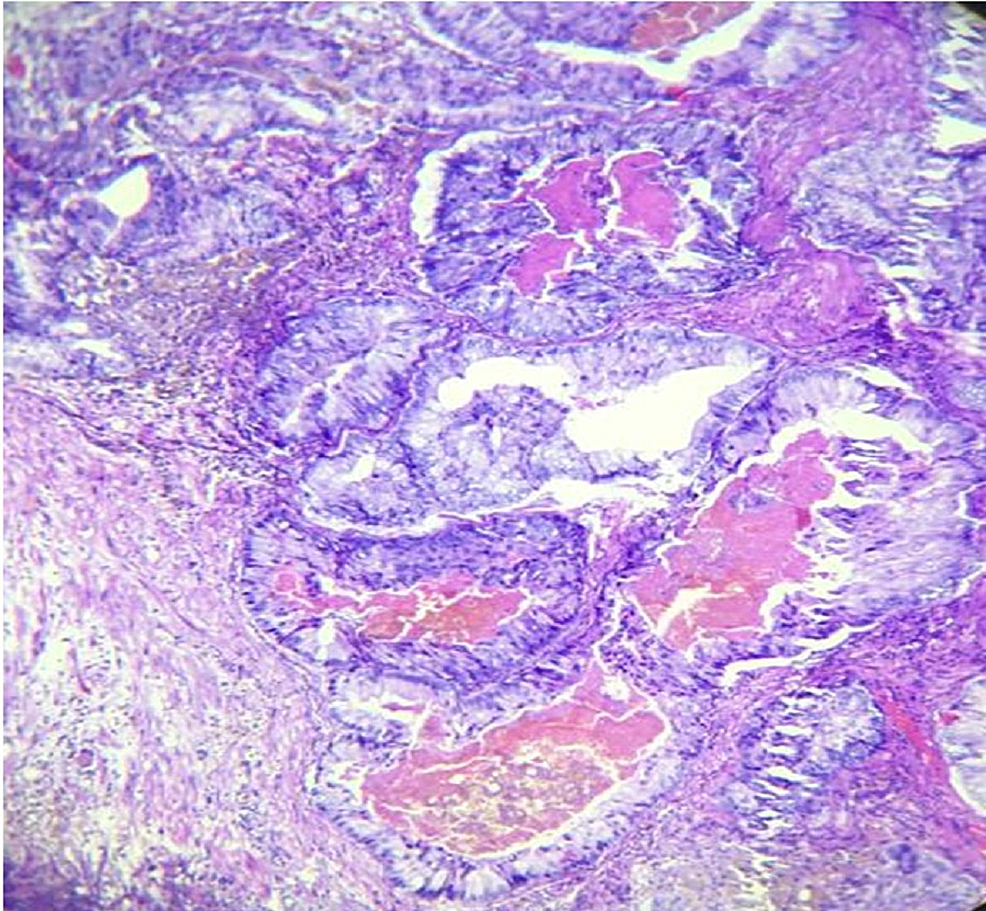 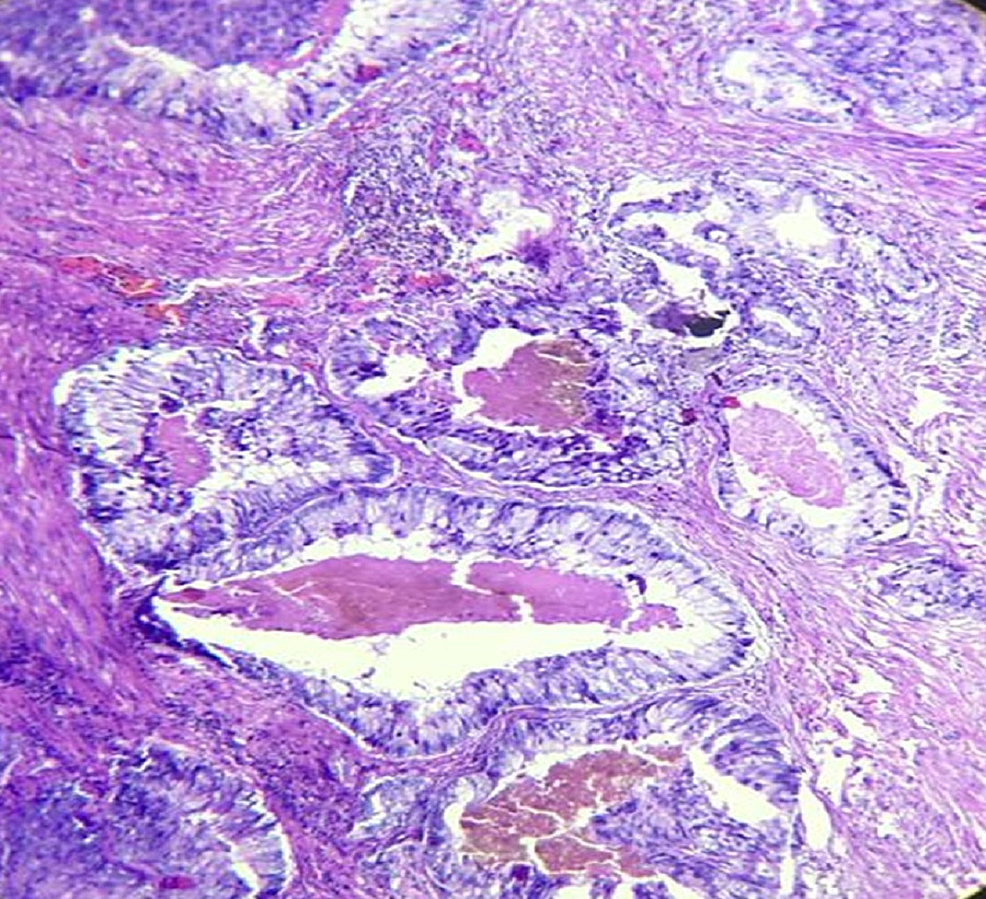 The patient underwent combination treatment open radical retropubic prostatectomy along with androgen blockade drugs, bicalutamide, and goserelin for six months. An 8-10 cm incision was made (well below the belt-line) in the skin between the umbilicus and the top of the pubic bone. The pelvis was then explored and the important structures such as the urinary bladder, prostate, urethra, blood vessels, and nerves were identified.

The prostate along with cyst was removed from the urethra below and the bladder above, and the bladder and urethra were reconnected. The yellowish color fluid was found in the cyst. The blood vessels leading to and from the prostate were divided and tied off. A catheter running through the penis into the bladder was typically required for at least a week after surgery. A surgical drain was left in the pelvis to allow drainage of blood and other fluid. Additional components of the operation include:

- Nerve-sparing surgery was attempted to protect the cavernous nerves of the penis, which control erection. These nerves are very thin and fragile and run next to the prostate and may be destroyed during surgery, leading to impotence.

- Bone scan and CT chest, abdomen, and pelvis were negative for metastasis; radiotherapy was not given to the patient. Serum PSA level was within normal range of 4 ng/ml and under follow up.

Tumor represents pathologically by tall columnar, pseudostratified epithelium with papillary architecture and macroscopically, it appears to be exophytic with villous growth and can involve the surrounding pelvic structure. Men with prostatic ductal adenocarcinoma are likely to present with locally advanced disease, although lymph nodes appear to be comparable between ductal and acinar pathology [1].

It is suggested that in prostatic ductal adenocarcinoma presenting with normal or slightly raised serum PSA level except in metastatic disease due to growth in pre-existing ducts or urethra which provide a route of egress of cellular secretions [3]. Thus, there are higher chances of under diagnosis of prostatic ductal adenocarcinoma due to normal to low level of serum PSA level.

Purely cystic prostatic ductal adenocarcinoma is a rare entity. In our case report, we diagnosed our patient with prostatic ductal adenocarcinoma on radiological basis and was further proved by histopathological examination. Our patient was diagnosed having ductal adenocarcinoma of the prostate with Gleason score 5+4=9, grade group V (WHO 2016 Classification). Our patient underwent a combination of surgical resection and androgen deprivation therapy and is under follow-up. More efforts are being made from our behalf to contribute knowledge regarding tumor biology, to understand normal to slightly raised serum PSA levels, and to assess its response to therapy.

© Copyright 2019
Khanduri et al. This is an open access article distributed under the terms of the Creative Commons Attribution License CC-BY 3.0., which permits unrestricted use, distribution, and reproduction in any medium, provided the original author and source are credited.