This is a cross-sectional study which shows the 25-OH vitamin D levels of asthma patients and compared to healthy controls followed by a tertiary pediatric clinic. We investigated the effect of 25-OH vitamin D levels on the severity of asthma. The severity of asthma was determined mainly by the duration of asthma diagnosis, a number of attacks in the previous year, anti-inflammatory medication usage in a previous year, atopy presence in the family, skin prick test positivity, and immunoglobulin E (IgE) levels of asthma patients.

Children aged between 6 and 15 years with a diagnosis of asthma followed by the Pediatric Pulmonology Clinic of Dr. Lutfi Kırdar Kartal Research and Training Hospital were included in the study. A control group of healthy patients in the same age range was selected from among patients applying for a routine check-up to general pediatrics outpatient clinic. Patients were excluded if history revealed or it was documented in patients' files that they were taking 25-OH vitamin D supplements, if they had additional chronic pulmonary conditions or if any infectious or chronic diseases were present. Data were collected between September - December 2010 and September - December 2011. The study was designed as such to exclude any bias originating from the effect of seasonal sunshine on the blood 25-OH vitamin D levels. Patients and controls were enrolled and their data were collected at the same season/time frame.

A questionnaire collecting sociodemographic information with questions to determine asthma severity in the patients was prepared by the authors and completed by patients’ parents. 25-OH vitamin D supplementation history in the first year of life was queried.

The protocol was approved by the local Ethics Committee and informed consents were obtained from each parent, including consent for publication of data.

Vital capacity and flow rates were measured by spirometry in accordance with the criteria of the American Thoracic Society (ATS) while patients were awake and in the seated position [12]. Spirometry was performed by one of the authors. The values of spirometry were expressed as the ratio of percentage of normal values based on age, gender, and height. The best value of a minimum of the three adequate measurements was taken. Reference values obtained in the study by Knudson, et al. [13] were used.

Statistical analysis was performed by Statistical Package for the Social Sciences (SPSS) 16.0. Continuous variables were described through means and standard deviations, whereas categorical variables were presented as proportions. Categorical variables were compared with Chi-square and with Fisher’s exact test when 20% of the expected frequencies were less than five. Continuous variables among two groups were compared with Student T-test, since the data followed a normal distribution. Bivariate correlations were evaluated through Pearson correlation. Spearman correlation was used to analyze the relation between FEV1, FVC and blood 25-OH vitamin D levels in terms of deficient or insufficient. A p-value < 0.05 was considered as statistically significant.

Seventy-three patients with asthma (40 male, 33 female) and an average age of 10.2±2.7 years (range 6-15 years) were enrolled in the study. The control group consisted of 44 healthy subjects (24 males, 20 females) without any chronic disease or infection, in the same age range (average age: 10.0±2.6 years). There was no statistically significant difference between the two groups in terms of age, gender, P and ALP levels. There was no statistical difference between the 25-OH vitamin D levels according to gender and age (p>0.05).

Demographic information, biochemical analyses and 25-OH vitamin D data for all subjects are shown in Table 1.

There was no relationship between the blood 25-OH vitamin D levels and the time since asthma diagnosis, the number of attacks, inhaled steroid, systemic steroid or anti-inflammatory (either inhaled corticosteroşds or leukotriene inhibitors) medication use during the last year, atopy in the family, skin prick test positivity, 25-OH vitamin D usage in first year of life and Ig E levels in asthma patients (p>0.05). 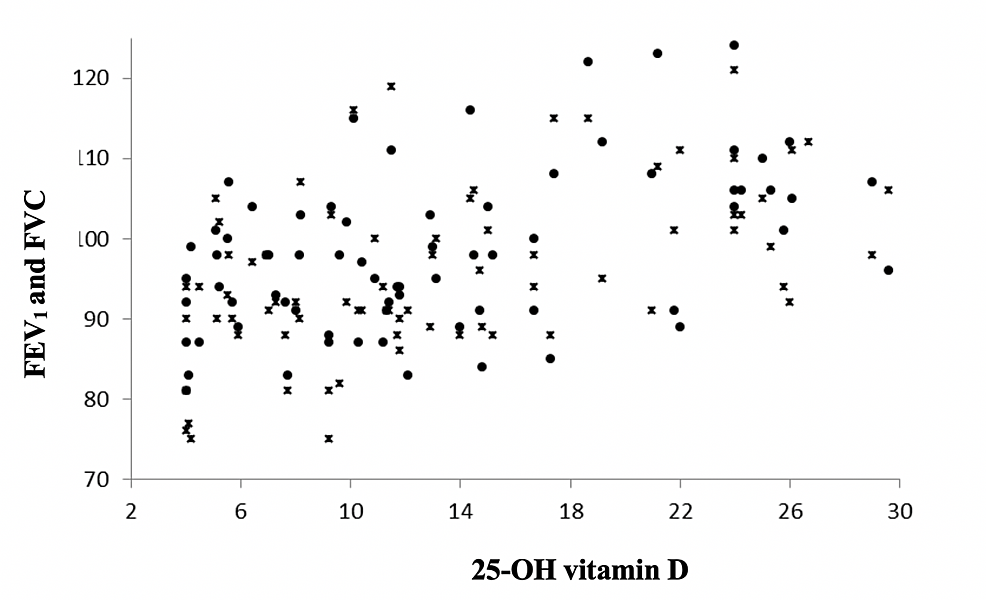 Another factor to be pointed out is that the usage of food fortified by 25-OH vitamin D is extremely low in Turkey when compared to other countries. In a study, 25-OH vitamin D deficiency was more prevalent among infants who did not receive supplementation with 25-OH vitamin D, and the seasonal effects were more pronounced in this group (78% were deficient in winter vs 4% in summer) [16]. It should be noted, however, that one weak point of our study was that we did not determine 25-OH vitamin D levels during the summer.

Another weak point of our study is the fact that we did not have the chance to evaluate other possible factors like race, sun exposure time and gene polymorphisms which might have important effects on the blood vitamin D levels. The fact that asthma patients might go outdoors less often compared to healthy children might be another reason for low vitamin D levels.

Some studies showed that 25-OH vitamin D supplementation might increase the effect of glucocorticoids in steroid resistant patients by increasing IL-10 production which is an anti-inflammatory mediator affecting the peripheral mononuclear cells [11,19-20]. One recent study showed that vitamin D alleviates airway remodeling by down-regulating the activity of Wnt/β-catenin signaling pathway [21].

Despite the great number of recently published studies on the relation of vitamin D with asthma there is still no consensus on considering 25-OH vitamin D as an alternative single treatment for inflammatory diseases but is only adviced as a supplementation [26-27].

© Copyright 2019
Ozturk Thomas et al. This is an open access article distributed under the terms of the Creative Commons Attribution License CC-BY 3.0., which permits unrestricted use, distribution, and reproduction in any medium, provided the original author and source are credited.

Early Diagnosis of Left Pulmonary Artery Sling During First Week of Life in ...