The use of orbital implants to replace lost volume was a major breakthrough in anophthalmic socket surgery. The implant aims to reduce frequent incidences and severity of infection due to the availability of immune responses, allowing soft tissue connection between the extraocular muscles and resulting in better motility and reduced implant migration and extrusion [1]. The most common porous orbital implants used today include hydroxyapatite, porous polyethylene, and aluminum oxide.

Bone derived from hydroxyapatite (bone dHA) orbital implants was first introduced by Schmidt in 1899. Jordan et al. documented that this implant had pore sizes that varied from 300 to 600 µm [2]. Pore size appears to have an effect on the rate of fibrovascular ingrowth, which occurs more rapidly in implants with a 200 µm pore size than in implants with a 500 µm pore size [3]. Porous polyethylene implants were introduced over a decade ago and have been available for orbital implantation (Medpor®, Porex Surgical Incorporation, Georgia, USA) since 1991. They have pores similar to hydroxyapatite but are less uniform in size and more irregular in shape. Commercially available Medpor® has pore sizes of 100-500 μm and 125-1000 μm.

In current practice, Medpor® has been accepted as the preferred option of orbital implant in Malaysia. However, its cost is still the most concerning drawback. The National Tissue Bank of Universiti Sains Malaysia has invented and prepared biocompatible bovine bone dHA orbital implants at a lower cost [4]. We conducted this study in order to compare clinical and pathological reactions toward locally synthesized bovine bone dHA and Medpor® orbital implants in animal models.

This experimental study was conducted at the Laboratory of Animal Research and the Laboratory of Histopathology, School of Medical Sciences, Universiti Sains Malaysia, Kubang Kerian, Kelantan, Malaysia. Approval was obtained from the Research and Ethical Committee, School of Medical Sciences, and Animal Ethics Committee, Health Campus, Universiti Sains Malaysia. The study’s protocol adhered to the Association for Research and Vision in Ophthalmology Statement for the Use of Animals in Ophthalmic and Vision Research.

Fourteen healthy New Zealand white rabbits weighing between two and three kg were included in this study. All animals were free from any eye disease and were kept, fed, and cared for in the Laboratory Animal Research, Universiti Sains Malaysia, Kubang Kerian, Kelantan, Malaysia.

The bovine dHA implants were synthesized from local bovine femoral heads and prepared at the National Tissue Bank, Universiti Sains Malaysia, Kubang Kerian, Kelantan, Malaysia [4]. Medpor® implants were supplied by the manufacturer. They were implanted after evisceration was performed on the right eye by an identified investigator (Figure 1).

Serial clinical examinations were performed on Days 1, 7, 14, 28, and 42 post-implantation by another masked investigator. The general wellbeing of the animals was assessed based on the presence of eye discharge, urine color and odor, feeding, and physical activity. The wounds were examined using a portable slit lamp for integrity, implant migration, or extrusion. On Day 42, the rabbits underwent euthanasia and the eyes with the implants were enucleated.

The orbital implants together with scleral coating were dissected and maintained in a 4% neutral formalin buffered solution. The gross appearances of the bisected implants were examined by an assigned independent examiner. The specimens were then prepared using the undecalcified method. After the fixation process, the samples were dehydrated and then embedded in a methacrylate solution (Technovit 720 Virus Creation Laboratory, Kulzer, Wehrheim, Germany).

After polymerization, they were processed according to the cutting-grinding technique and sliced between 0.1 and 0.3 mm thick [5]. The sections were stained with hematoxylin and eosin and examined using light microscopy. They were evaluated for the grade of cellular inflammation and fibrovascular ingrowth according to standardized histopathological grading as described by Tienen et al. and Chung et al. [6-7]. The findings are summarized in Tables 1-2.

Statistical analysis was performed with the Statistical Package for the Social Sciences (SPSS) version 11.0 (IBM Corp, Armonk, NY, US). Data were analyzed by a statistical test with statistical significance set at p<0.05.

In both groups, eye discharge was observed as early as Day 1 post-implantation. Three subjects (42.9%) emanated from the bovine bone dHA group and two subjects (28.6%) were derived from the Medpor® group. Conjunctival swab culture and sensitivity proved negative in all the involved subjects. They were treated with topical moxifloxacin four times per day in the affected eyes. All subjects had normal urine color, urine odor, and physical and feeding activity throughout the study period. The results are shown in Table 3.

All specimens displayed visible tissue ingrowth in between interconnecting channels from the peripheral towards the center of the implant. Specimens from the Medpor® group demonstrated a relatively smooth implant surface. Their interconnecting channels were more uniform and noticeably smaller in size than the bovine bone dHA implants. Tissue ingrowth was observed in the entire bovine bone dHA implant, whilst the central-most area was spared in the Medpor® implant (Figure 2). 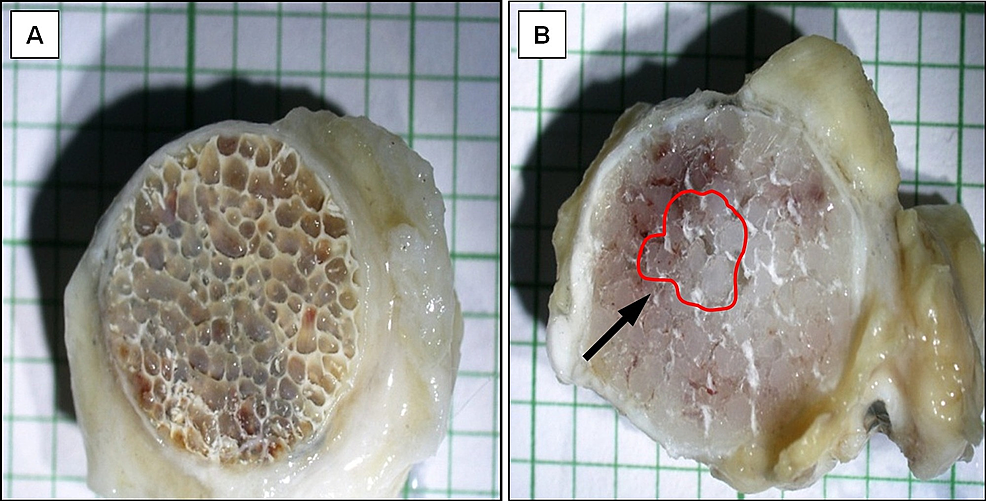 Both groups demonstrated fibrovascular tissue maturation after six weeks, as described in Tables 6-7.

Tables 8-9 present the depth of fibrovascular ingrowth at six weeks between the studied groups.

Our study demonstrated that all subjects from the bovine bone dHA group had similar clinical reactions as those in the Medpor® group. No cross-infection was demonstrated in either group. Subclinical infection, as evidenced by the presence of eye discharge that responded to a topical antibiotic, was demonstrated in five (35.7%) subjects.

The above observation is consistent with an animal study reported by Sclafani et al. [8]. They implanted expanded polytetrafluoroethylene and Medpor® in Sprague-Dawley rats. Staphylococcus aureus was inoculated 14 days after implantation to induce infection, and 75.0% of the implants remained clinically uninfected. They suggested that the presence of vascularized host tissue in and around the implant lends resistance to experimentally induced infection. Recently, Fernandez-Bueno et al. reported a similar outcome between Medpor® and a new porous implant (Oculfit I and II) [9].

Our results are consistent with findings reported by Goldberg et al. They described six cases of conjunctival dehiscence with a hydroxyapatite implant at a mean of 4.5 weeks post-implantation [10]. They hypothesized that spicules of the implant inhibited epithelialization, which subsequently led to wound dehiscence.

We noted that the bovine bone dHA group demonstrated a higher trend of tissue maturation. Grade 5 fibrovascular maturation was seen in 71.4% compared to 42.9% of subjects in the Medpor® group. However, these data were not statistically significant.

We observed that fibrovascular ingrowth developed in the centripetal progression toward the center of the implants. All of the bovine bone dHA groups showed complete fibrovascular ingrowth while only 57.1% from the Medpor® group demonstrated more than 80% depth of ingrowth towards the end of the six-week period. Our observation is parallel with a few other published studies, which reported that complete fibrovascularization occurred after the Medpor® implant was observed at 12 weeks [15-19].

Hsu et al. implanted the Medpor® implant into 12 rabbits and reported that the extent of fibrovascular ingrowth at six weeks was at an average of 76.3%. This is lower than our findings of an average of 82.9% [16]. Rubin et al. compared the extent of fibrovascular ingrowth in porous polyethylene versus hydroxyapatite [18]. They reported complete fibrovascularization at six weeks in hydroxyapatite and 12 weeks in porous polyethylene.

The size and distribution of the pores in the porous implant determined the rapidity of fibrovascular ingrowth. Generally, larger pore size will allow more rapid fibrovascularization. Our study demonstrated how the bovine bone dHA implant achieved complete fibrovascularization after six weeks. This is in keeping with gross specimen observation, which displays larger pore sizes (300-600μm) in bone dHA than in Medpor® (100-500μm). However, previous studies reported that fibrovascular ingrowth was sluggish when pore sizes were larger than 700 μm [17-18,20]. These were attributed to an insufficient supporting structure, increased fragility, decreased intensity, and higher risk of infection [17-18,20].

The authors would like to acknowledge the Universiti Sains Malaysia for providing financial support (short-term grant).

© Copyright 2019
Roslinah et al. This is an open access article distributed under the terms of the Creative Commons Attribution License CC-BY 3.0., which permits unrestricted use, distribution, and reproduction in any medium, provided the original author and source are credited.

Resolution of Corneal Dellen After an Uneventful Pterygium Surgery with Punc ...