Conclusion: Radiation therapy for EGC in our patients showed reasonable five-year LCR with larynx preservation at 83.1%, DFS 80.0%, five-year OS rate 92.6%, and DSFS rate 96.2%. We found that smoking had a significant correlation with LCR. However, large prospective trials are warranted to evaluate the efficacy of overall treatment time, dose per fraction of above 2 Gy, and smoking effect.

Compared to the rest of the world, the incidence of laryngeal squamous cell carcinoma is much lower in the Kingdom of Saudi Arabia, likely due to the recent adoption of smoking habits in the population over the last three decades [1]. In one of the retrospective reviews of head and neck (H&N) malignancies conducted between 1987 and 2000 at King Fahad Specialist Hospital (KFSH) and Prince Faisal Oncology Center (PFOC), Buraidah, Saudi Arabia, it is reported that nine out of 135 (6.7%) H&N cancer patients were diagnosed with laryngeal carcinoma [2]. According to the Saudi Cancer Registry report 2012, laryngeal carcinoma constituted 1% of all site malignancies [3]. Among those, the majority of patients presented at advanced stages.

The true vocal cords (TVC) or glottic larynx is the most commonly involved subsite, depicting approximately two-thirds of laryngeal carcinoma [4]. Glottic carcinoma typically presents early, and unlike many other H&N malignancies, lack of lymphatic drainage in the glottis mucosa fetches small risk of lymph node involvement [5]. Early glottic carcinoma (EGC) is defined as tumor confined to one TVC (T1a), both vocal cords (T1b), or tumor that extends to supraglottic or subglottic with minimal functional impairment of TVC (T2) [6]. Radical radiation therapy is the appropriate initial modality for T1 and T2 lesions, with surgery reserved for salvage after failure.

Hypofractionated regimens are undertaken routinely for treating EGC [5,6]. One of the randomized trials demonstrated the superiority of modest hypofractionation with 2.25 Gy per fraction and, in large retrospective series, fraction sizes of ≥ 2.25 Gy compared favorably with other reported series [7-9]. Many United Kingdom (UK) series have reported high rates of local control with shorter hypofractionated schedules ranging from 50-52.5 Gy delivered in 16 fractions over three weeks for T1 lesions and 55 Gy in 20 fractions for T1 and T2 lesions [10-12]. On the other hand, hyperfractionated schedules have not shown significant improvement compared with conventional fractionation [13,14].

We found hoarseness of voice as the most common presenting symptom in all the cases (100%). The majority of the cohort was with T1a EGC (70.4%, n=19) and with moderately differentiated squamous cell carcinoma histology (77.8%, n=21). Anterior commissure invasion was seen in three patients (11.1%). None of the patients had any nodal involvement or any metastatic disease.

The median duration of the follow-up was 52.83 months (range 2-103). A total of four patients (14.8%) had local recurrences with a median time to local recurrence 22.2 months from the completion of radiotherapy (range: 10-33). Two local recurrences were managed with salvage laryngectomy, while one patient refused surgery and another died of another primary (hepatocellular carcinoma). The five-year LCR of our cohort was 83.1% (Figure 1). 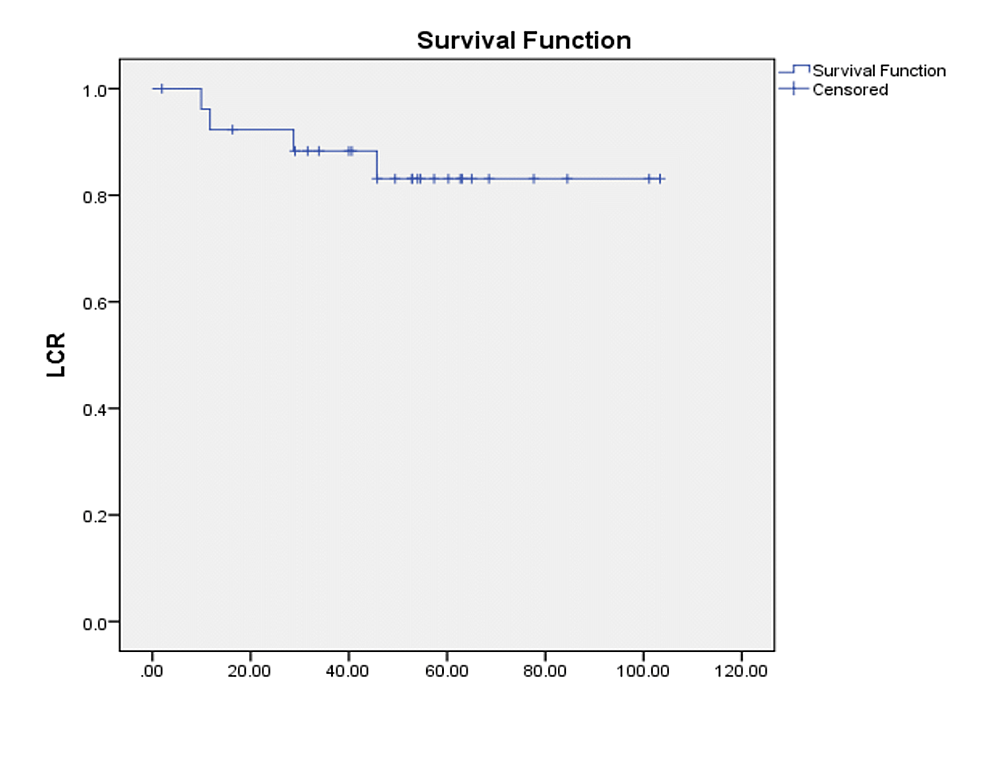 According to age, the mean LCR was 96.3 months for those below 65 years and 81.4 months for those 65 years or older. There was no statistically significant difference between these two groups (p= 0.25) and that could be explained by a lower number of patients. However, the curves showed some variation. Histopathology did not have any statistically conclusive effect on mean LCR, with 64.1 months for well-differentiated and 91.2 months for moderately differentiated cancers with a p-value of 0.761. 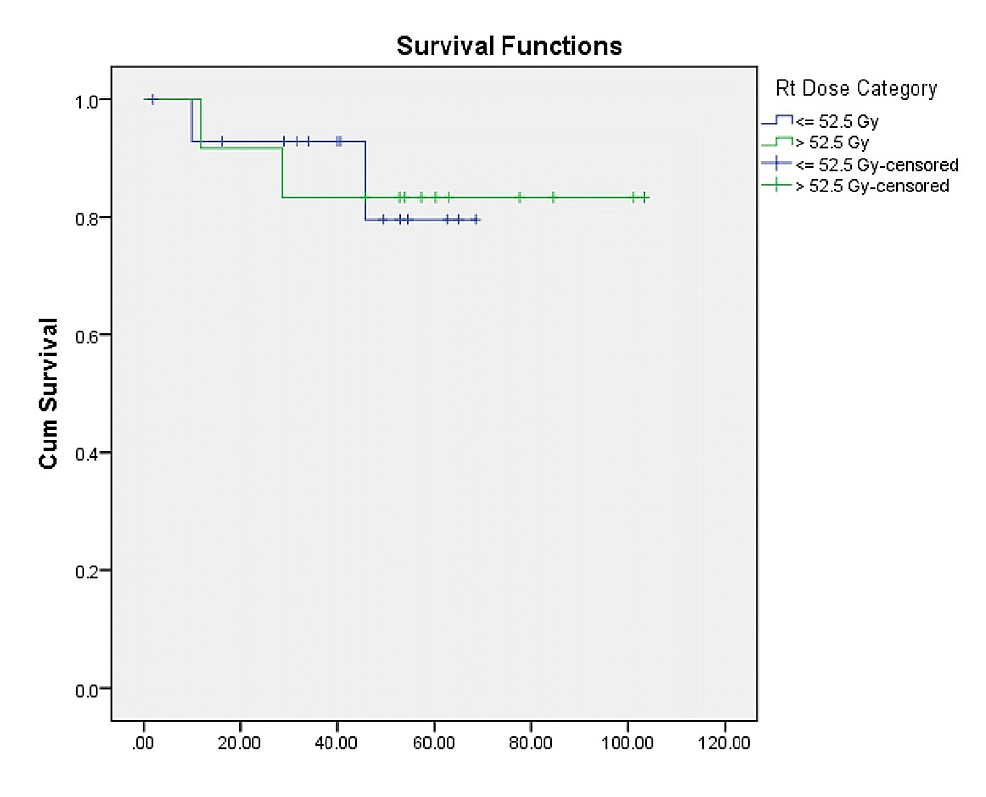 Lastly, we found that the patients who had an unknown or negative smoking history did well with a five-year LCR of 100%, while patients with a positive history of smoking had an LCR of 60.6% with a significant p-value (0.044) (Figure 3). 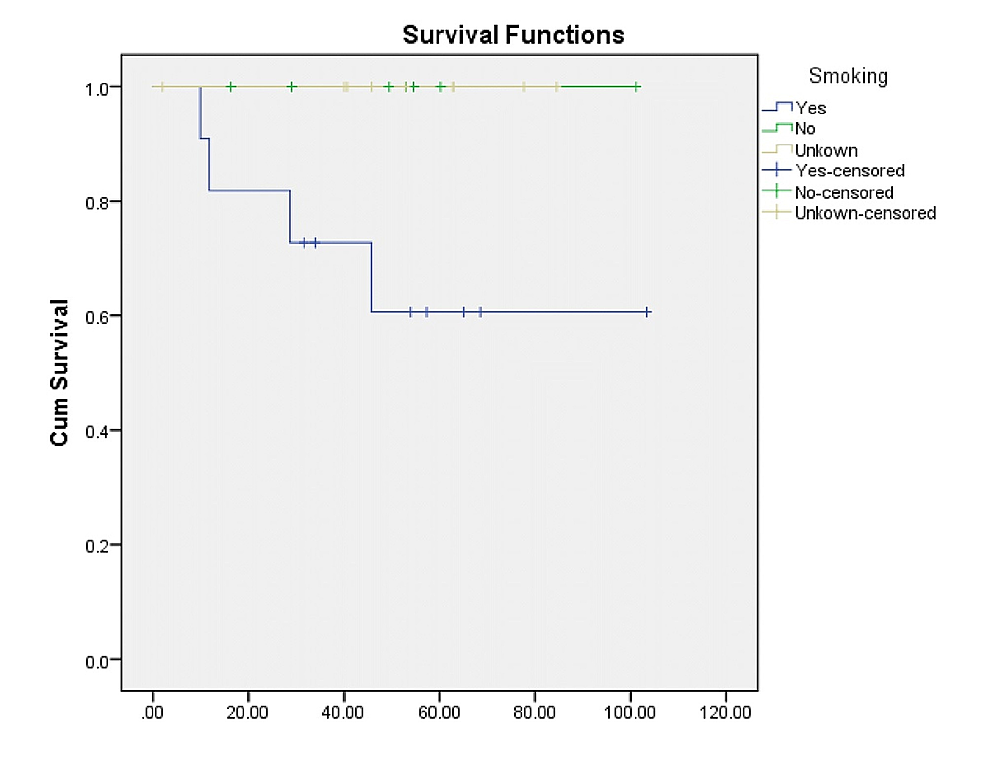 During the follow-up, four patients developed local recurrences, one developed a second primary tumor (lung cancer) and received systemic chemotherapy. The five-year DFS of our cohort was 80.0% (Figure 4). 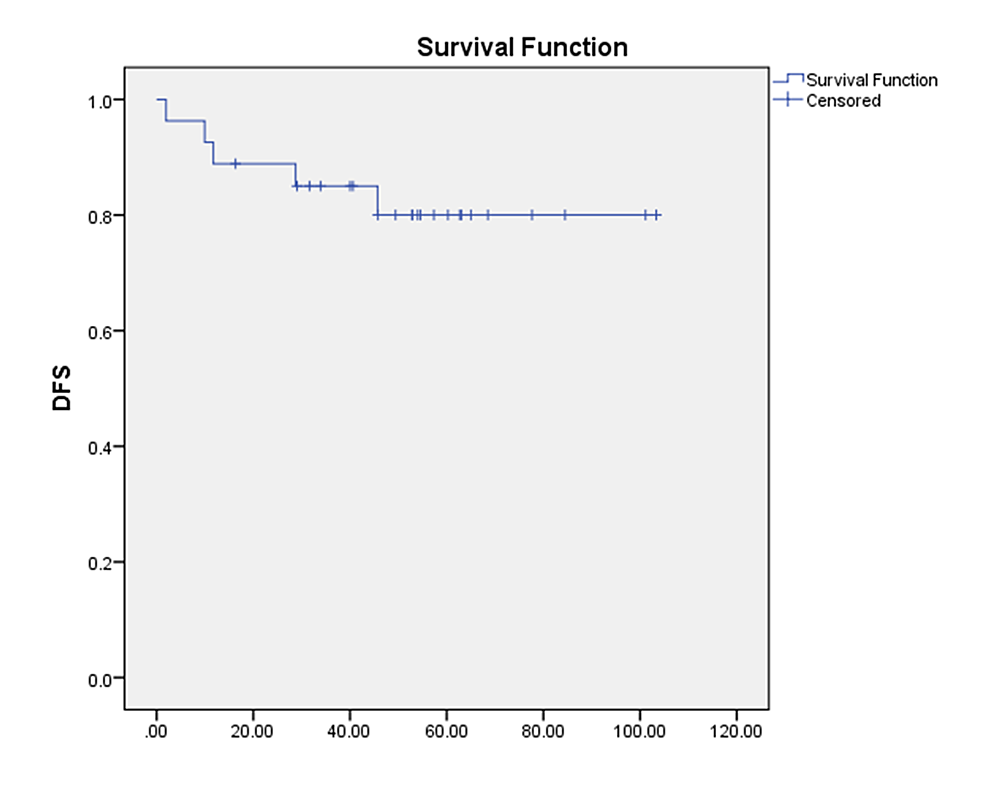 Our cohort showed only one patient who died due to progression of disease, laryngeal carcinoma, bringing the five-year DSFS to 96.2% (Figure 5). 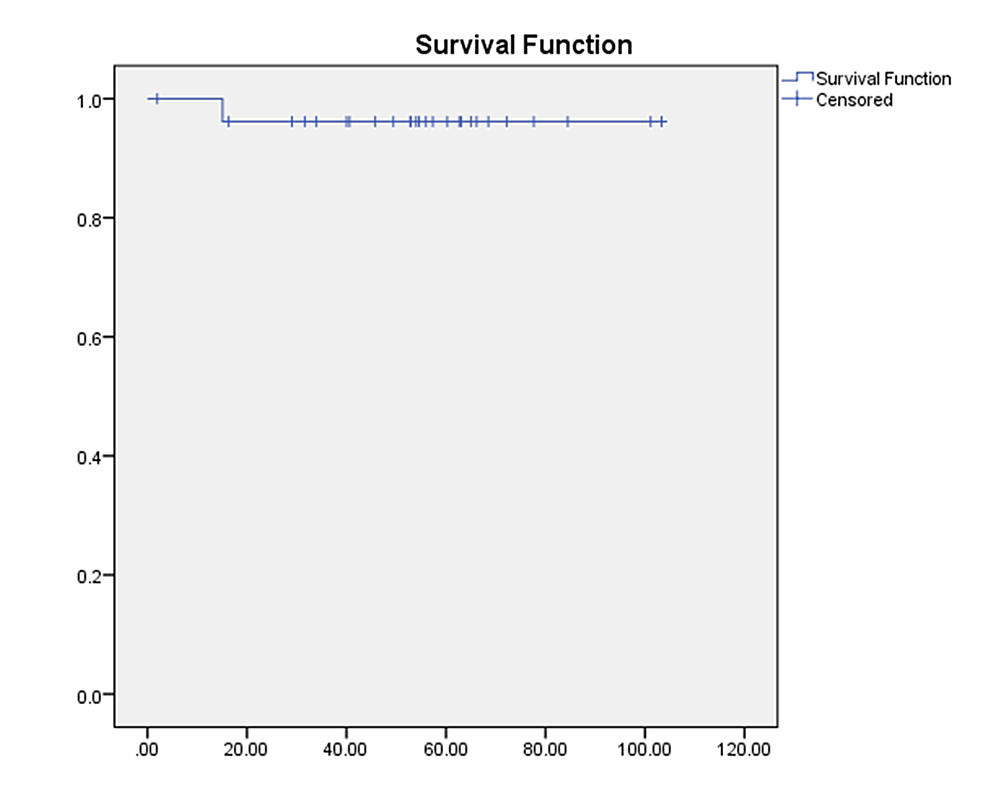 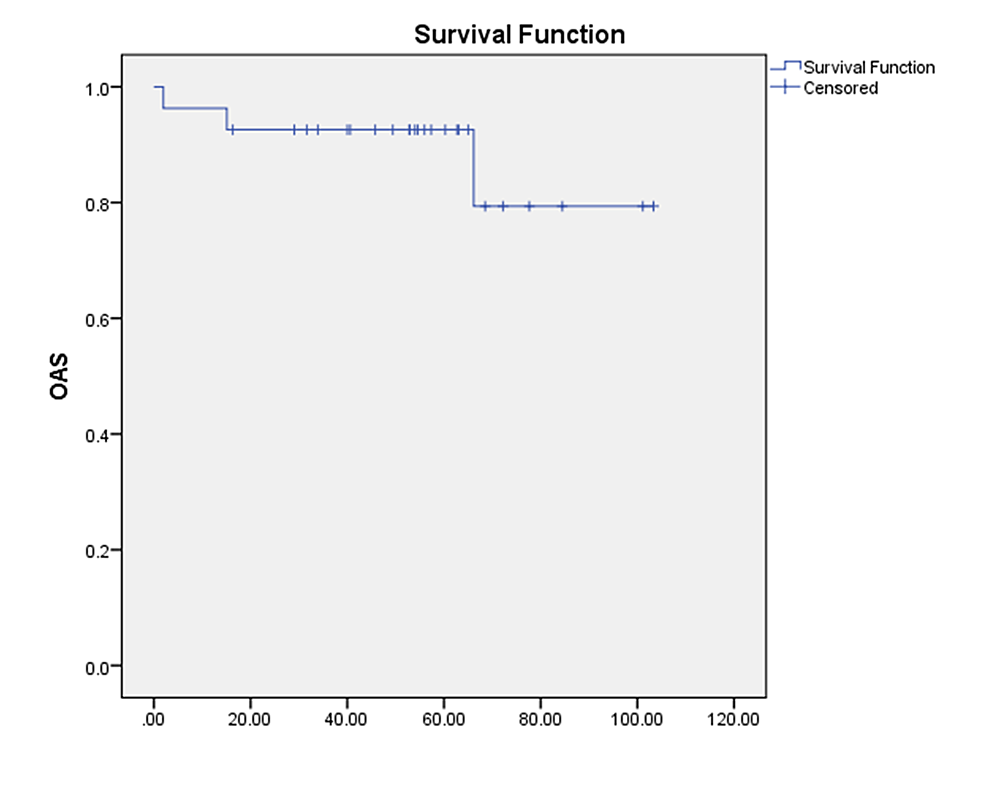 Radiotherapy is the treatment of choice with excellent laryngeal preservation rates in early glottic cancer. Various dose fractionation regimens have been used; however, trials incorporating hypofractionation schedules were found to be associated with significant local control rate (LCR) and quality of voice [6,7]. Our current retrospective study was aimed primarily to assess the efficacy of various fractionation schedules used in our institute for the treatment of EGC (T1, T2) in terms of local control rates.

LCR with a larynx preservation rate of 84.9% in our cohort was found in proximity to one large retrospective study conducted by Mendenhall et al. in which 519 patients with EGC showed a five-year LCR with a larynx preservation of 84.3% [6]. However, a study conducted at St James's Institute of Oncology at Leeds, UK showed a five-year LCR of 95.4% [12]. In our study, smoking history was found to be associated with poor LCR. Slightly inferior LCR in our research can be explained by (a) a predominantly male cohort (88.9%, n=24), as the male gender is known to be associated with decreased lower LCR after radiation therapy in previously published studies [6,15]; (b) four patients (14.8%) were treated with regular fractionation schedule, prolonged treatment time might have an impact on LCR [16]; (c) anterior commissure involvement in 11.1% (n=3) in our study, which has been addressed as an independent poor prognostic factor for local control; and (d) high percentage of positive smoking history (40.7%, n=11) [17-18].

The five-year OS rate was 92.1% in our cohort, which was found to be in agreement with other previously published studies [19-20]. No severe late toxicity was observed in our cohort, including in patients who underwent salvage laryngectomy, which was also found to be in agreement with published literature. An extensive study by Garden et al. reported 4% severe side effects following radiation therapy in 230 patients with T2 laryngeal carcinoma [21].

The limitations of our study included (a) a small sample population, (b) retrospective study design, (c) missing data regarding voice quality assessment, and (d) pretreatment hemoglobin was not evaluated.

Radiation therapy for early glottic carcinomas in our local cohort of patients showed similar outcomes in terms of control rates and overall survival when compared to international data published in the literature. We were able to achieve a reasonable five-year local control rate with larynx preservation and excellent DFS, DSFS, and five-year OS rates. We found that only smoking had a significant correlation with LCR. However, large prospective trials are warranted to evaluate the efficacy of overall treatment time, dose per fraction of larger than 2 Gy, and smoking effect on the local control.

Human subjects: Consent was obtained by all participants in this study. King Fahad Medical City Institutional Review Board (IRB) issued approval KFMC-IRB-16-028. This was a retrospective study which involved only reviewing medical records of patients treated with radiation therapy at King Fahad Medical City. There was no direct involvement of any human subject. The data was collected only after formal approval of the IRB committee. It was an IRB approved study of reviewing historical medical records, so informed consent was waived. Animal subjects: All authors have confirmed that this study did not involve animal subjects or tissue. Conflicts of interest: In compliance with the ICMJE uniform disclosure form, all authors declare the following: Payment/services info: All authors have declared that no financial support was received from any organization for the submitted work. Financial relationships: All authors have declared that they have no financial relationships at present or within the previous three years with any organizations that might have an interest in the submitted work. Other relationships: All authors have declared that there are no other relationships or activities that could appear to have influenced the submitted work.

© Copyright 2018
AlQahtani et al. This is an open access article distributed under the terms of the Creative Commons Attribution License CC-BY 3.0., which permits unrestricted use, distribution, and reproduction in any medium, provided the original author and source are credited.