Aortic stenosis is classified as stenosis that can be caused by a congenital disability in infants and children but is more commonly produced by a degenerative process of calcification and scarring of the valve in the later decades of life. High systemic pressure and hemodynamic disturbances characteristic of this area of the cardiovascular system makes the aortic valve susceptible to plaque and cholesterol buildup over time, similarly to atherosclerosis, contributing to the pathology of aortic stenosis. Thus, this study aims to assess the short and long-term clinical outcomes of risk factor reduction, post transcatheter aortic valve replacement (post-TAVR), and results of tested medication outcomes.

This study showed that therapy with aspirin and clopidogrel alone did not demonstrate a significant increase in mortality versus alternative anticoagulation therapy in patients post aortic valve replacement. Clopidogrel and statin usage post-aortic valve revascularization may have a trend towards a reduction in mortality.

As the aortic valve begins to calcify, less blood can be pumped efficiently from the left ventricle of the heart to the aorta. This lack of blood directly affects the blood supply to the brain as well as the rest of the body causing symptoms characteristic of aortic stenosis. These symptoms vary among patients but typically include angina, shortness of breath, syncope or lightheadedness, and congestive heart failure. Also, as a result of the aortic valve being narrowed, the pressure gradient between the left ventricle and the aorta increases. The left ventricle compensates for the restricted blood flow, and this overworking mechanism can cause hypertrophy of the myocardium. Symptomatic aortic stenosis narrowing of the valve along with a difference in the mean gradient of 40 mm of Hg between the left ventricle and aorta is necessary for the diagnosis and treatment of aortic stenosis. The severity of aortic valve stenosis is classified into three categories: mild, moderate, and severe [1]. These categories are based on three variables: the valve area, the peak aortic valve velocity, and the mean pressure gradient.

As transcatheter aortic valve replacement (TAVR) therapy becomes increasingly prevalent, postoperative pharmacologic treatment is also a very high yield area of research for determining the optimal care plan for these patients. Heart condition patients have typically prescribed a variety of medications to promote adequate blood perfusion and limited coagulation. These medications include aspirin and clopidogrel for antiplatelet activity as well as beta-blockers and angiotensin-converting enzyme (ACE) inhibitors for the effects on regulating blood pressure [4]. Anticoagulants may also be used to decrease blood clot formation in patients with artificial valves, depending on the type of valve utilized. Statins, including atorvastatin, rosuvastatin, and pravastatin help reduce cholesterol levels. Combination therapy of aspirin and clopidogrel has shown to be statistically relevant for lowering mortality post aortic valve replacement. Statin therapy has also shown to be associated with an improved survival time when prescribed for aortic valve replacement patients [5]. This research study intended to compare different combinations of typically prescribed medications and the risk of the average hazards associated with mortality.

Patients that received an aortic valve replacement in the form of a transcatheter aortic valve replacement between the period of January 1, 2013, and December 31, 2016, were included. The total sample size of TAVR was (n=150). Data collected from the data warehouse included account number, a medical record number, admission and discharge dates, gender, age, procedure code, and last point of contact. Further data collected from each patient chart, including past medical history, included cardiac resynchronization therapy, diabetes, coronary artery disease, and congestive heart failure status. Medications prescribed at discharge, including aspirin, clopidogrel, beta-blocker usage, ACE inhibitor usage, statin usage, and anticoagulant usage, were also collected for analysis. This data was then compiled into an excel spreadsheet with “yes” indicated by a one and “no” indicated by a zero to be used for statistical analysis. STATA/SE 11.4 (StataCorp LLC, College Station, Texas, USA) program was used to analyze the data. A Cox proportional hazards model was applied to calculate the hazard ratios regarding mortality by using the last point of contact as an indicator of death. Results of the hazard ratio for the combination of aspirin and clopidogrel were compared to new anticoagulant therapy over 365 days as well as the entire period of the study.

Results of the hazard ratio for the combination of aspirin and clopidogrel were also compared to the combination of a beta-blocker, ACE inhibitor, and a statin over 365 days as well as for the length of the study. Into graphs to visually represent the hazard comparisons over time, a p-value was calculated to compare to the standard 0.05 to determine the significance of the results. The Cox proportional hazards model investigated the effect of multiple risk factors on the time mortality would take to occur. The predictors have an equivalent impact on the expected risk. 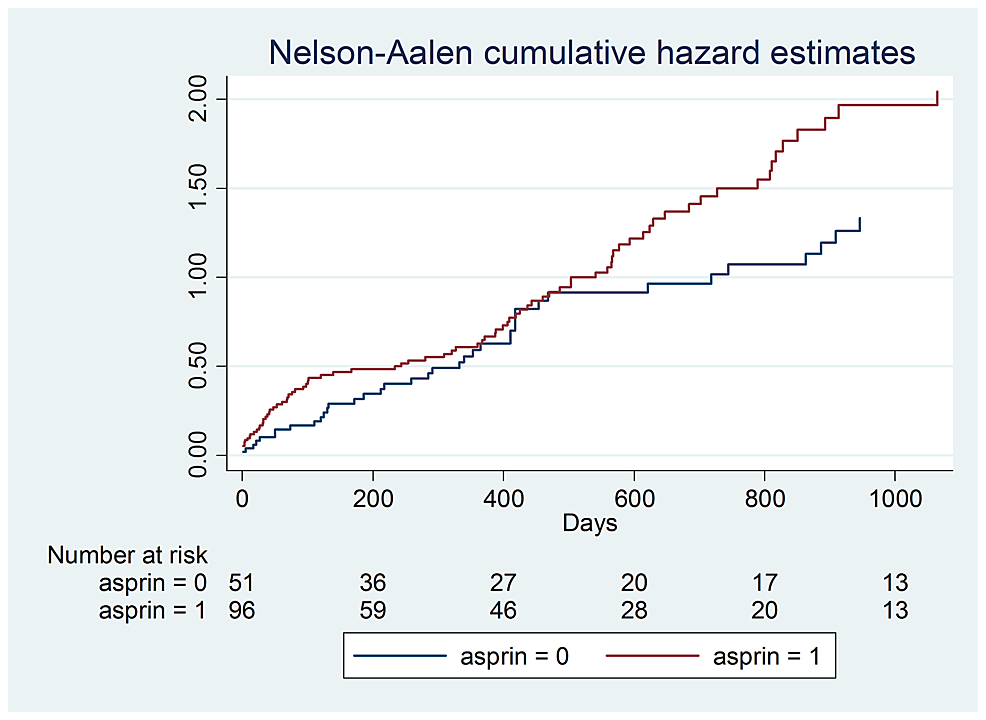 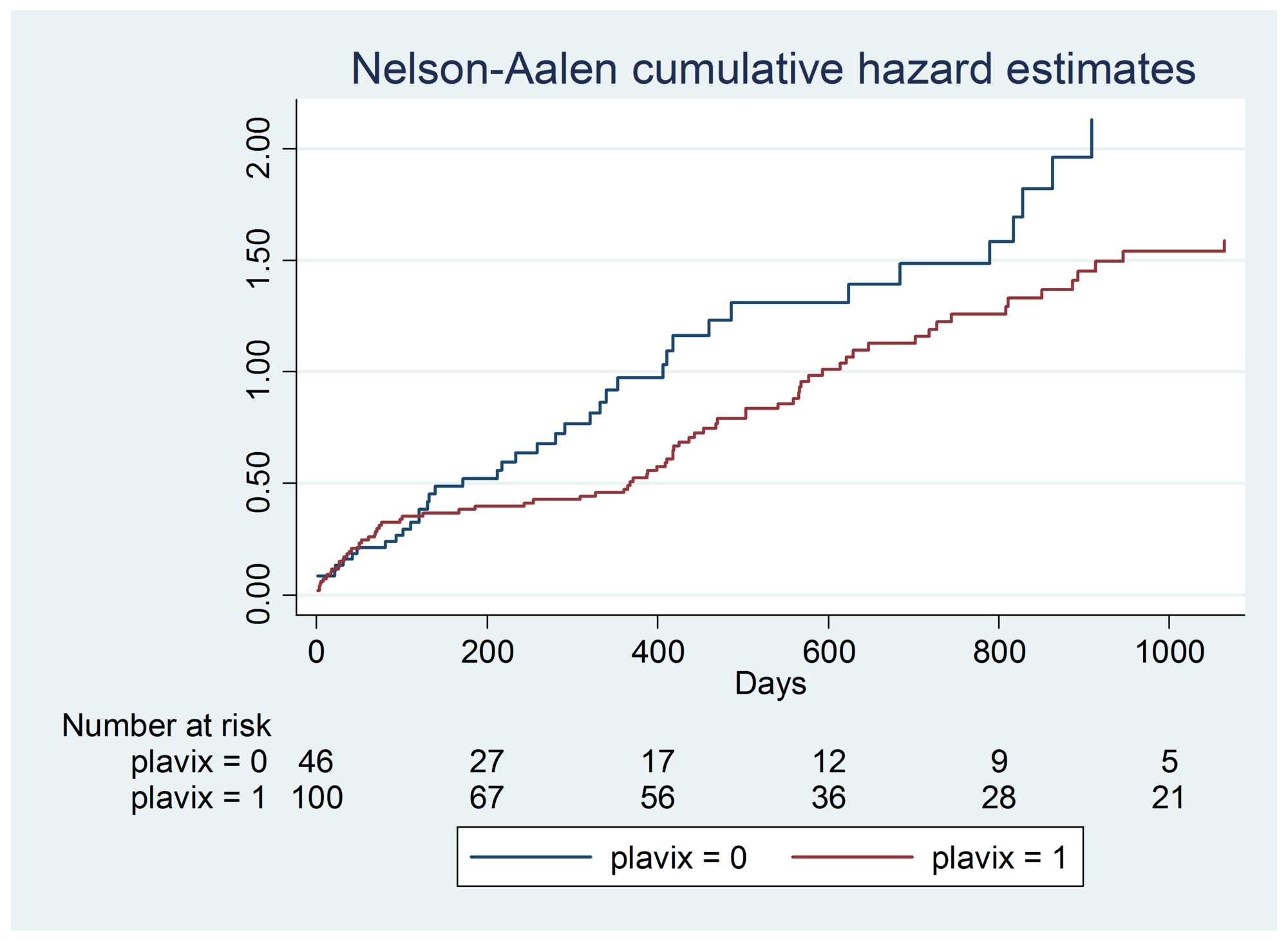 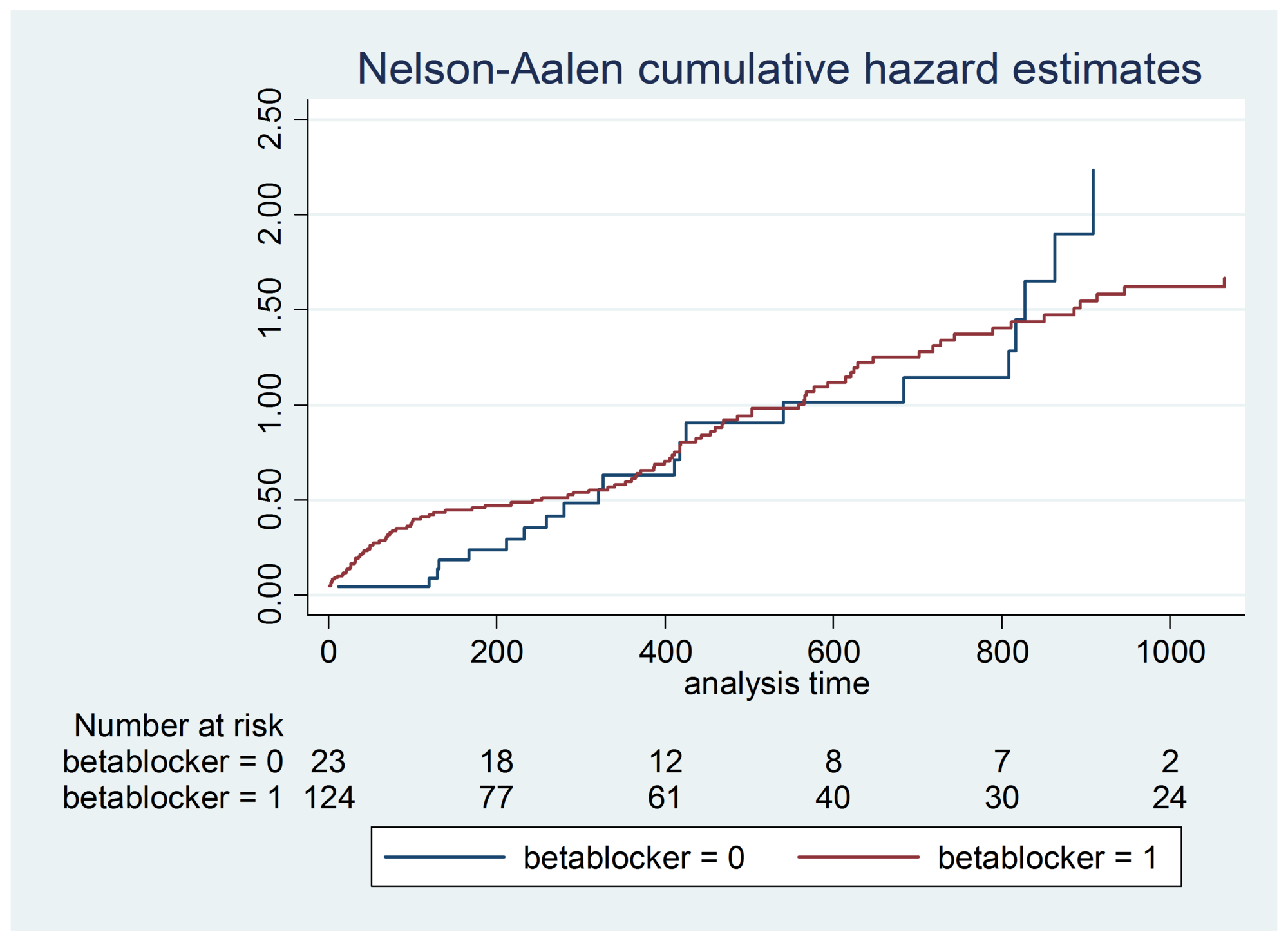 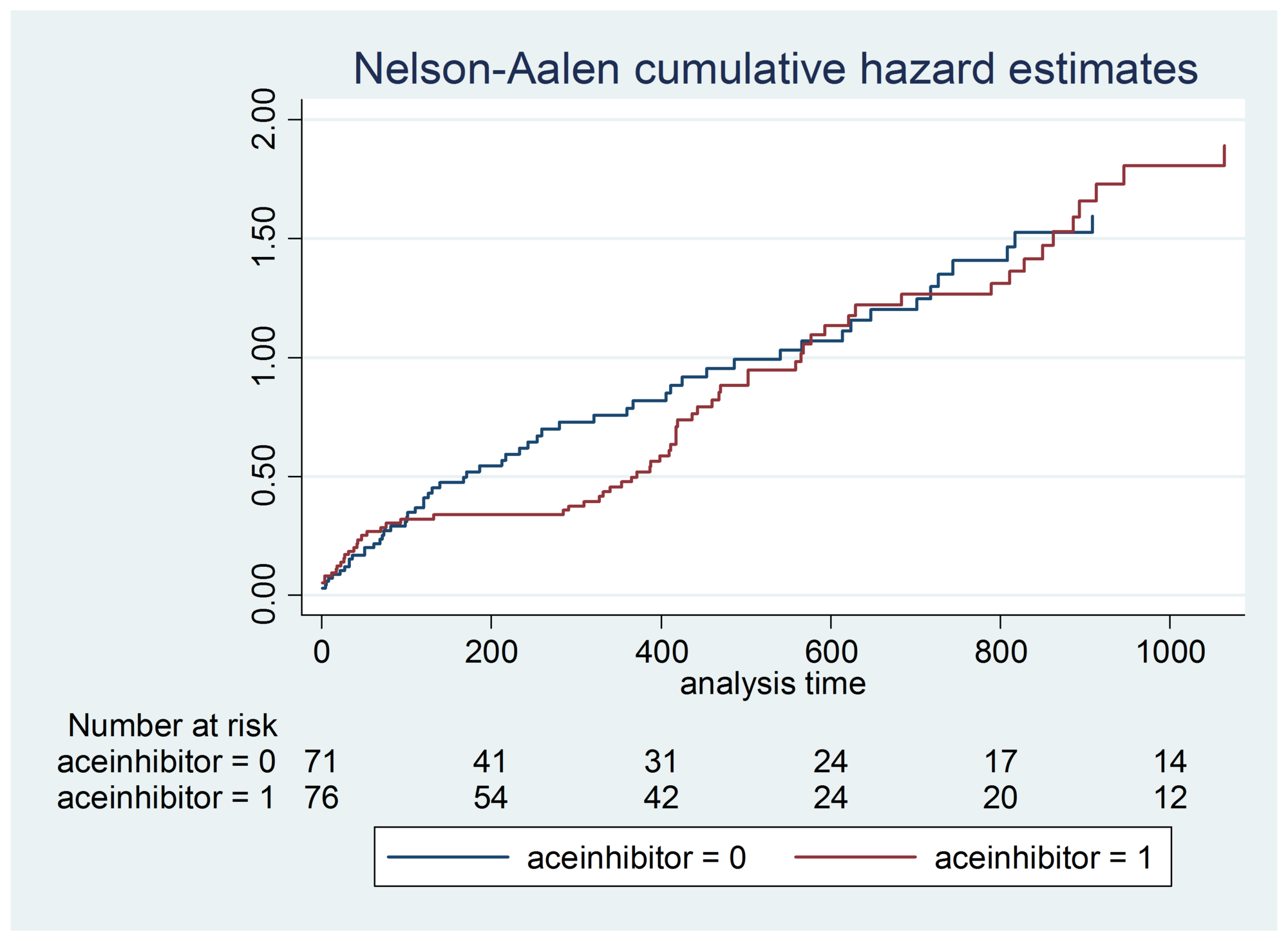 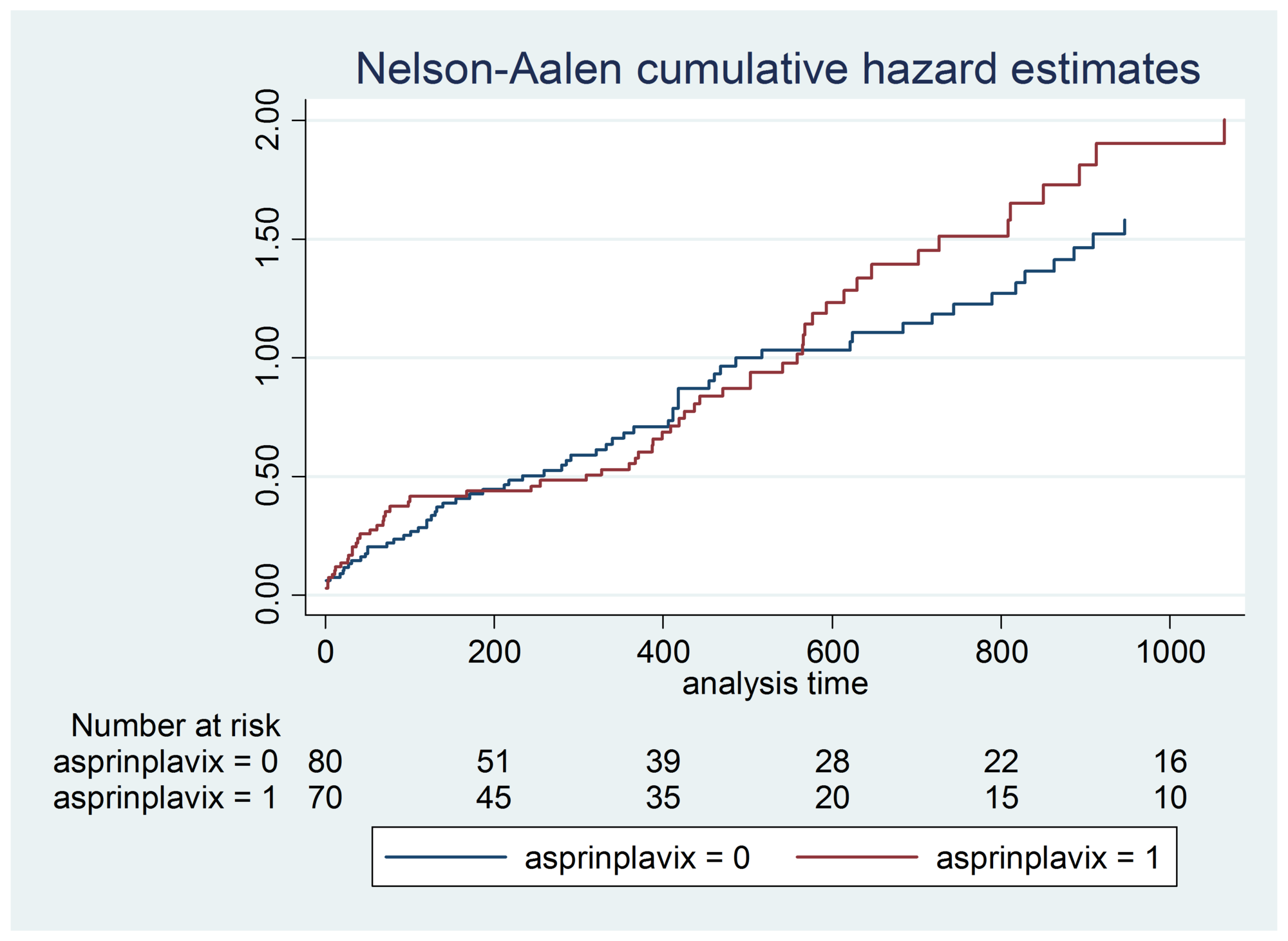 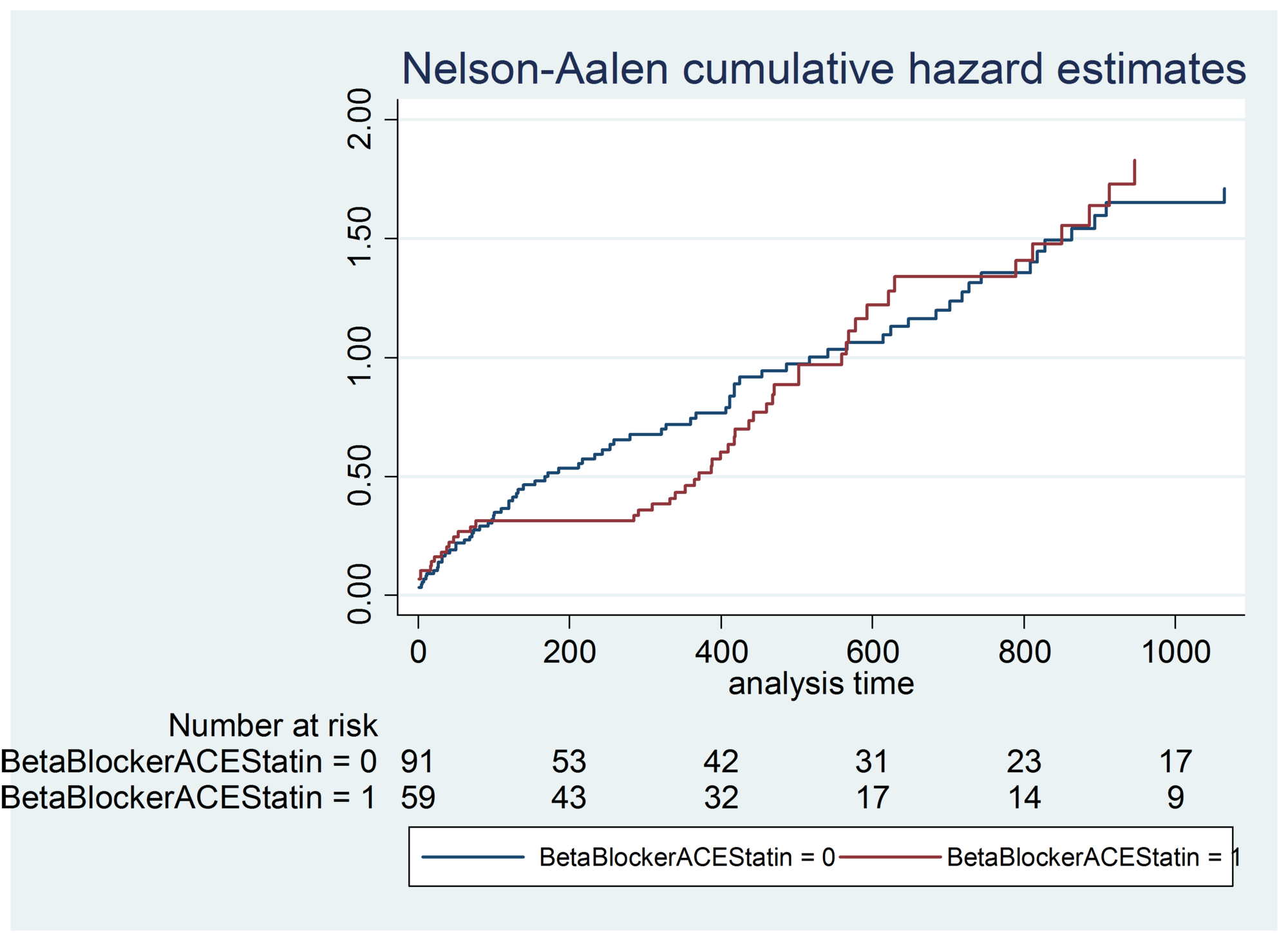 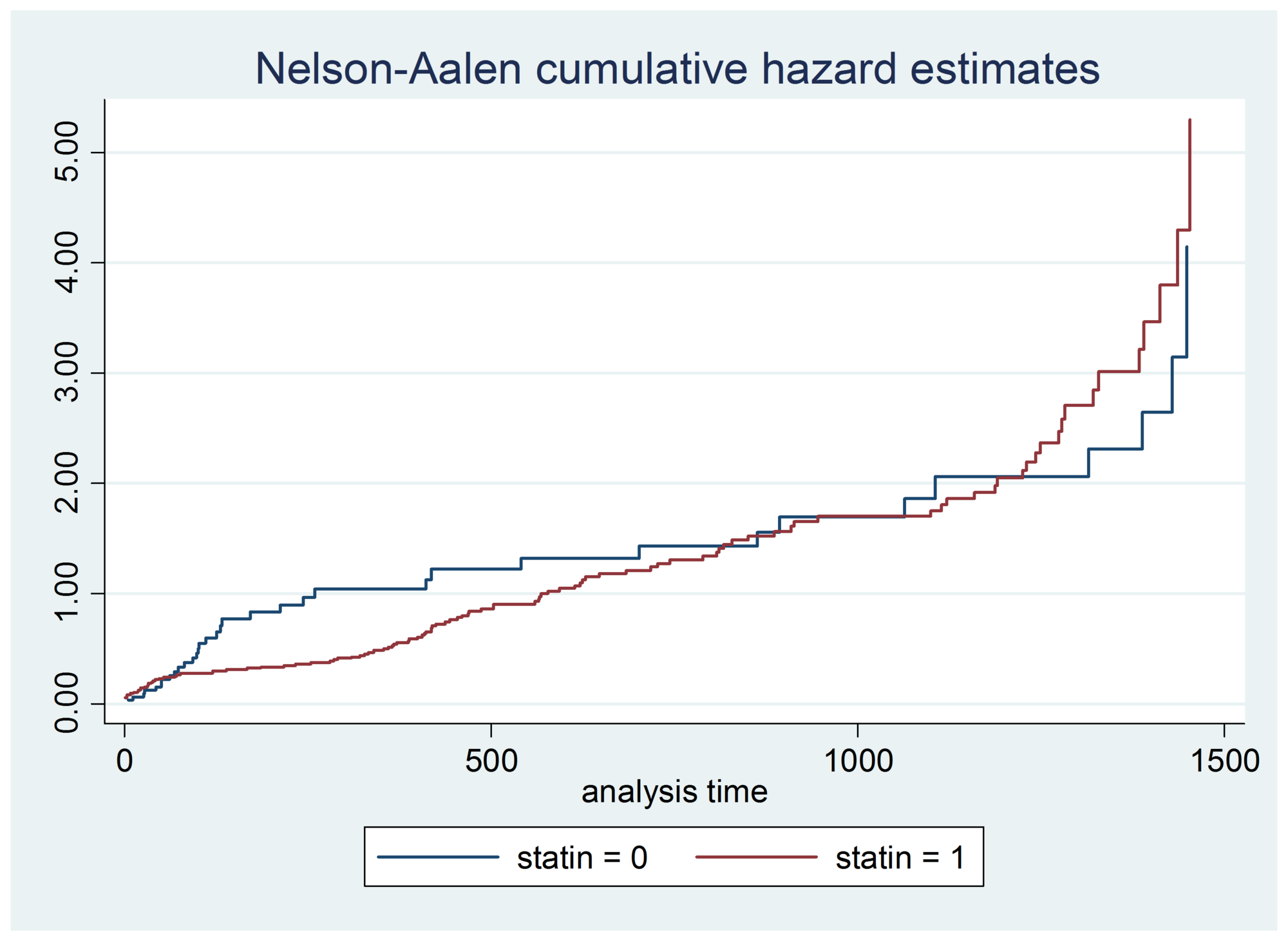 This study showed that therapy with aspirin and clopidogrel alone did not demonstrate a significant increase in mortality versus alternative anticoagulation therapy in patients post aortic valve replacement. No significant increase in mortality was found in post aortic valve replacement patients who were treated with a beta-blocker, ACE inhibitor, and statin when compared to aspirin and clopidogrel alone. We feel that these findings could help define new treatment strategies regarding patients who have undergone aortic valve replacement. As TAVR therapy has become more prevalent, the various post-procedure medication regimens have been studied as well. The post-TAVR medication strategy currently remains controversial. The American College of Cardiology Expert Consensus for the post-TAVR adult patient undergoing the procedure for aortic stenosis recommends dual antiplatelet therapy including clopidogrel 75 mg for three to six months post-procedure, and aspirin 75-100 mg. However, some studies have compared aspirin alone versus dual antiplatelet therapy that had found aspirin therapy apart to not only be non-inferior to dual antiplatelet therapy in the post-TAVR patient but to also confer less of bleeding risk in this particular patient population [6].

The standard protocol for medication utilization in aortic valve replacement patients as indicated by the American College of Cardiology and the American Heart Association states that patients receiving a transcatheter aortic valve replacement should receive pharmacological therapy consisting of aspirin and clopidogrel for a minimum of six months post-procedure [7]. The primary indication for antiplatelet therapy in the post aortic valve replacement patient is to prevent the occurrence of a thromboembolic event, namely a stroke. The majority of periprocedural strokes arise from thromboembolism from the actual valve site. The dislodgment of atheroemboli originating from an ulcerative plaque within the great vessels during maneuvering and manipulation of the catheter can lead to a stroke as well. Due to the risk of thromboembolism complications with TAVR dual antiplatelet treatment with aspirin and clopidogrel is recommended to decrease the risk of a thromboembolic event, assuming no contraindications to these medications exist [7]. However, unlike surgical aortic valve replacement, where there is a higher quantity of experience with anticoagulation, the management of anticoagulation and antiplatelet therapy in the post-TAVR patient appears to be more variable [8-10].

When reviewing the results of this research study, several limitations need to be considered. First, in retrospective studies assessing mortality, the death records are not always accurate. This data was collected through a hospital data collection, and not all death records are reported to the hospital where the aortic valve replacement was conducted. For this reason, the last point of contact for each patient with Charleston Area Medical Center was used to assess mortality. This is a limitation because it does not accurately represent mortality, and may therefore not accurately describe the results of this study. Secondly, data collected for analysis regarding past medical history, social history and medications at discharge relied solely on the accuracy of the patient chart that was taken by the attending physician. If any relevant information were omitted from the chart, this would have swayed the results of the analysis. The researchers believe that the information taken in the patient charts was accurate enough to validate the obtained results.

This study showed that therapy with aspirin and clopidogrel alone did not demonstrate a significant increase in mortality versus alternative anticoagulation therapy in patients post aortic valve replacement. As the TAVR procedure becomes more common differing medication protocols are necessary to tailer the differing medication combinations depending on both the patient and the patient population being treated. This evolution has been observed through the years as TAVR programs have become more significant over time, and differing medication diagnosis has been implemented and changed to fit individual cases. No significant increase in mortality was found in post aortic valve replacement patients who were treated with a beta-blocker, ACE inhibitor, and statin when compared to aspirin and clopidogrel alone within this study. We feel that these findings could help define new treatment strategies regarding patients who have undergone aortic valve replacement.

© Copyright 2019
Herron et al. This is an open access article distributed under the terms of the Creative Commons Attribution License CC-BY 3.0., which permits unrestricted use, distribution, and reproduction in any medium, provided the original author and source are credited.