Femoral head osteonecrosis is a condition caused by a compromise of the blood supply of the femoral head. The precarious blood supply of the head and its role as a major weight-bearing joint makes it one of the most common bones to be affected by osteonecrosis. We describe the etiology, clinical presentation, investigations and common management options used nowadays to treat it.

Osteonecrosis (ON) or avascular necrosis of the femoral head is a condition characterized by the death of osteocytes and bone marrow. Osteonecrosis is caused by an inadequate blood supply to the affected segment of the subchondral bone and is sometimes called “coronary disease of the hip” because it simulates the ischemic condition of the heart.

Osteonecrosis of the femoral head (ONFH) usually affects young adults in the third and fourth decades of life. There has been an increasing trend in its diagnosis; every year about 10,000 to 20,000 new cases are diagnosed in the United States [1]. According to the literature, about 5%-12% of hip arthroplasties are performed for the treatment of this condition per annum [2]. It starts with one femoral head being affected first; bilateral involvement occurs in two years in 72% of cases [2].

There are multiple contributory etiological factors of osteonecrosis. The use of glucocorticoids and excessive alcohol intake is associated with more than 80% of atraumatic cases. ONFH is the result of the combined effects of genetic predisposition, metabolic factors, and local factors affecting blood supply (e.g., vascular damage, increased intraosseous pressure, and mechanical stresses) [3-4]. 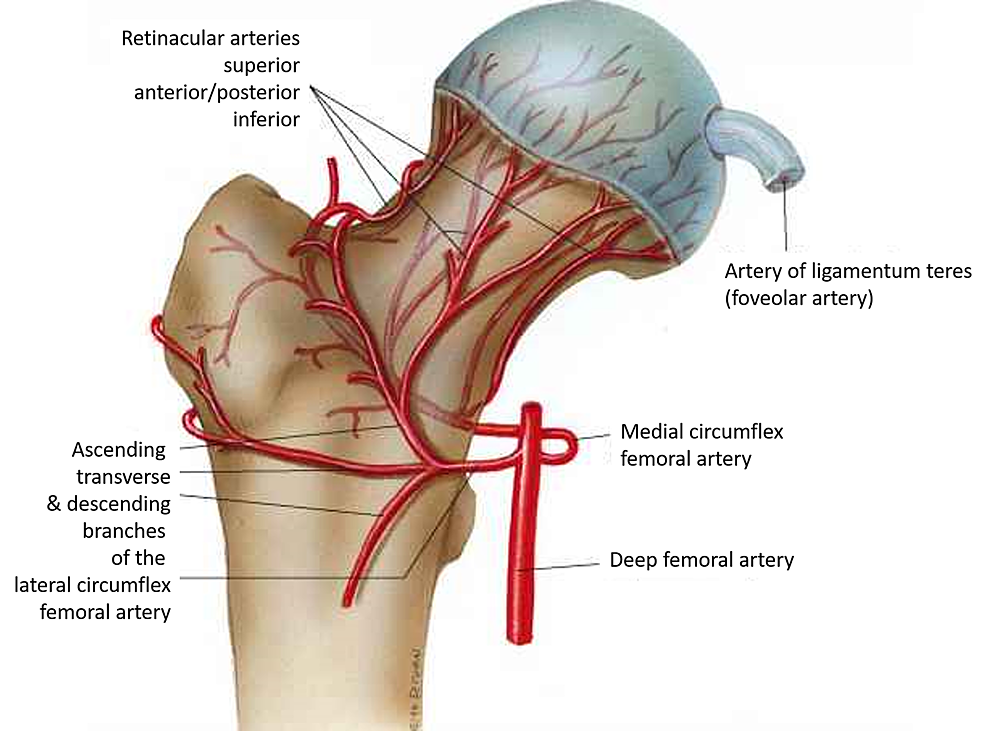 In cases of trauma, the resulting osteonecrosis is better understood because the vascularity around the femoral head is severely disturbed as a result of the injury. The most common traumatic causes of OFNH are dislocations and fractures. About 15%-50% of displaced femoral neck fractures and 10%-25% of hip dislocations end in ONFH [6].

In the cases of ONFH cited in the literature, elevated intraosseous pressure has been measured secondary to venous outflow obstruction and venous stasis. In the studies measuring intraosseous pressure, the bone is considered a closed compartment and pressure increases due to the compromised blood supply in many conditions that are known to causes OFNH.

ONFH may be asymptomatic in the early stages. Clinically, the most common symptom is a deep pain in the groin. Pain may be referred to the ipsilateral buttock or knee. Symptoms worsen with weight bearing and are relieved with rest. The range of motion becomes limited, particularly hip abduction and internal rotation; logrolling (i.e., passive internal and external rotation) elicits pain [6].

The imaging modalities that help in the diagnosis of OFNH are plain anteroposterior and lateral “frog-leg” radiographs, computed tomography (CT) scans, and magnetic resonance imaging (MRI). Plain radiographs are the first imaging investigation given their low cost, simplicity, and availability. The disadvantage of radiographs is their insensitivity for detecting ON in its early stages.

On X-rays, subchondral fracture (“crescent sign”) is one of the characteristic features usually present in the later stages of the disease (Figure 2). Advanced stages usually manifest as a degenerative joint disease (Figure 3) [7]. 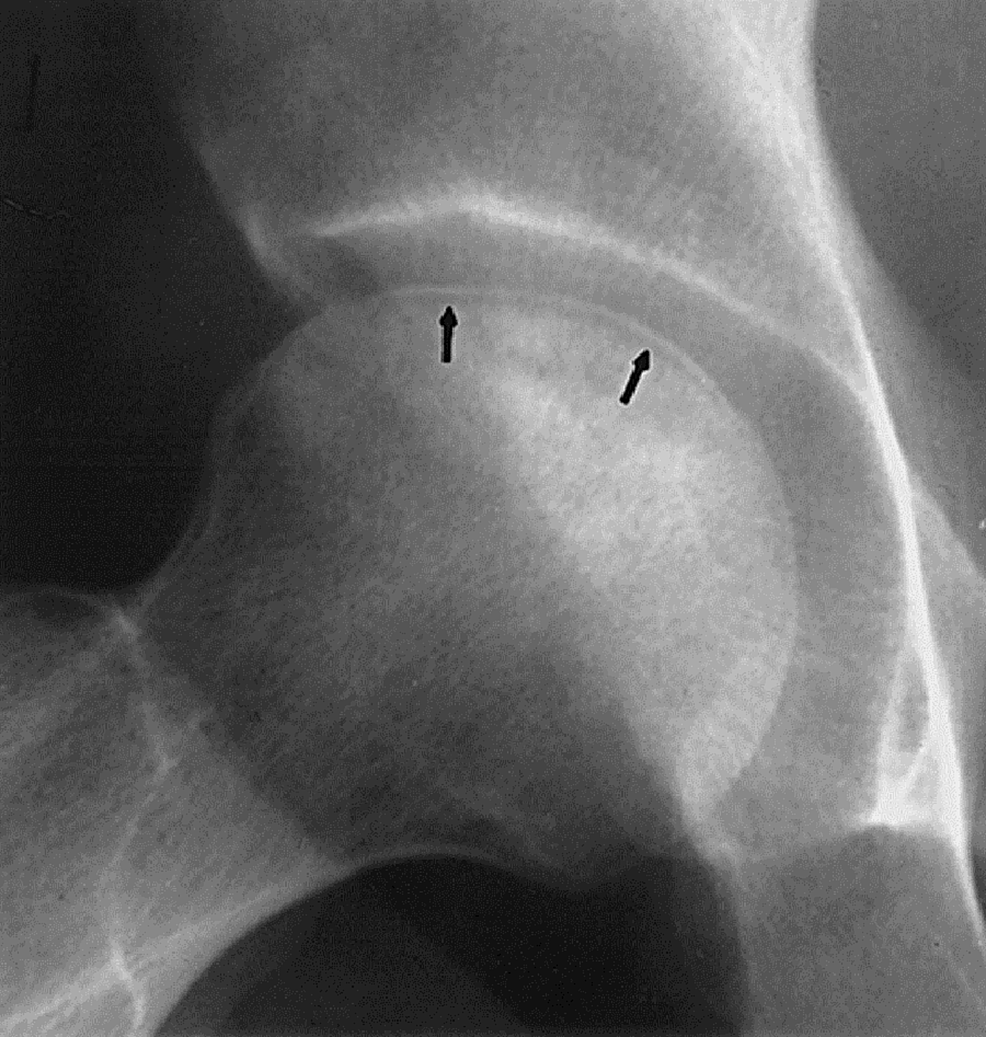 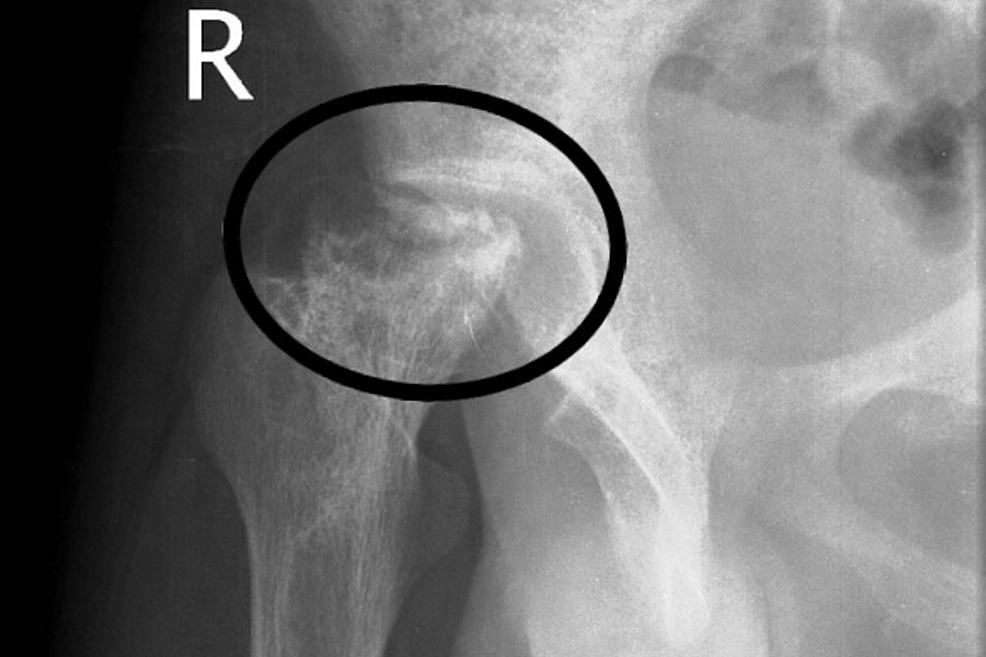 Advanced osteonecrosis shown in the circle.

CT is considered the most sensitive test for detecting subchondral fracture of the femoral head. While radiographs and MRIs are useful, a CT delineates the outline of the subchondral bone (Figure 4) [7]. 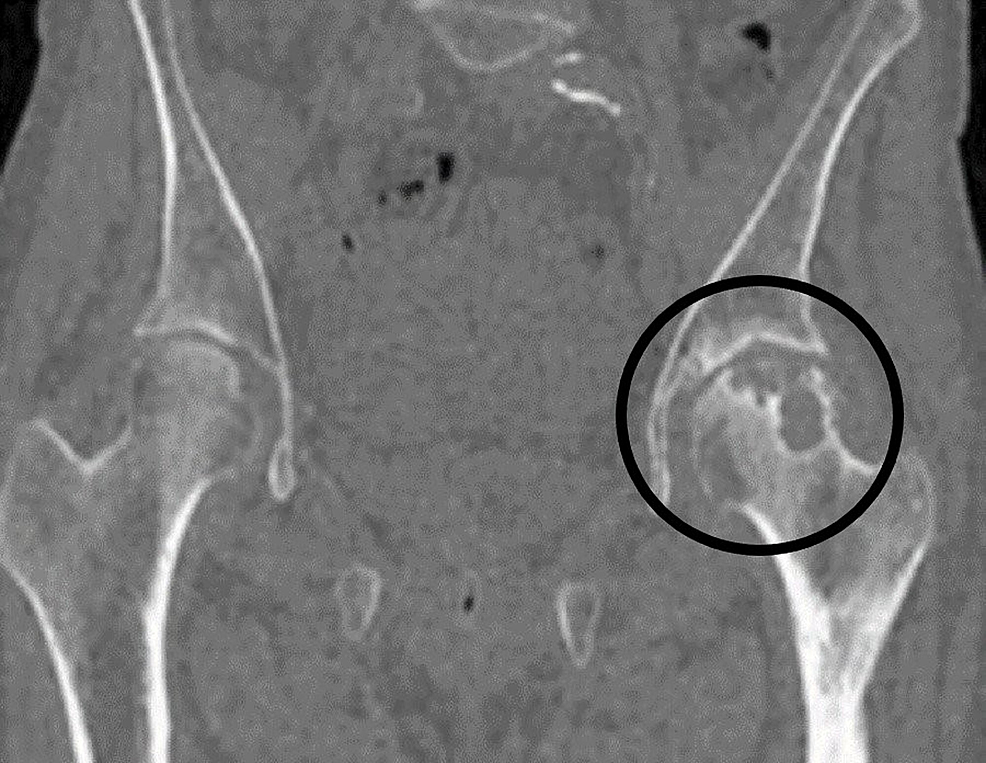 MRI is the imaging investigation of choice with the highest sensitivity (99%) and specificity (99%) as compared to plain radiographs, CT, or scintigraphy. MRI is the most useful screening tool for early diagnosis and a quantitative evaluation of the disease extent within the femoral head; it is very helpful in the staging of the disease. A single-density “band-like” lesion is seen on T1-weighted images, which is based on a signal from ischemic marrow (Figure 5). There is a “double-line” sign on T2-weighted images representing hypervascular granulation tissue [8]. 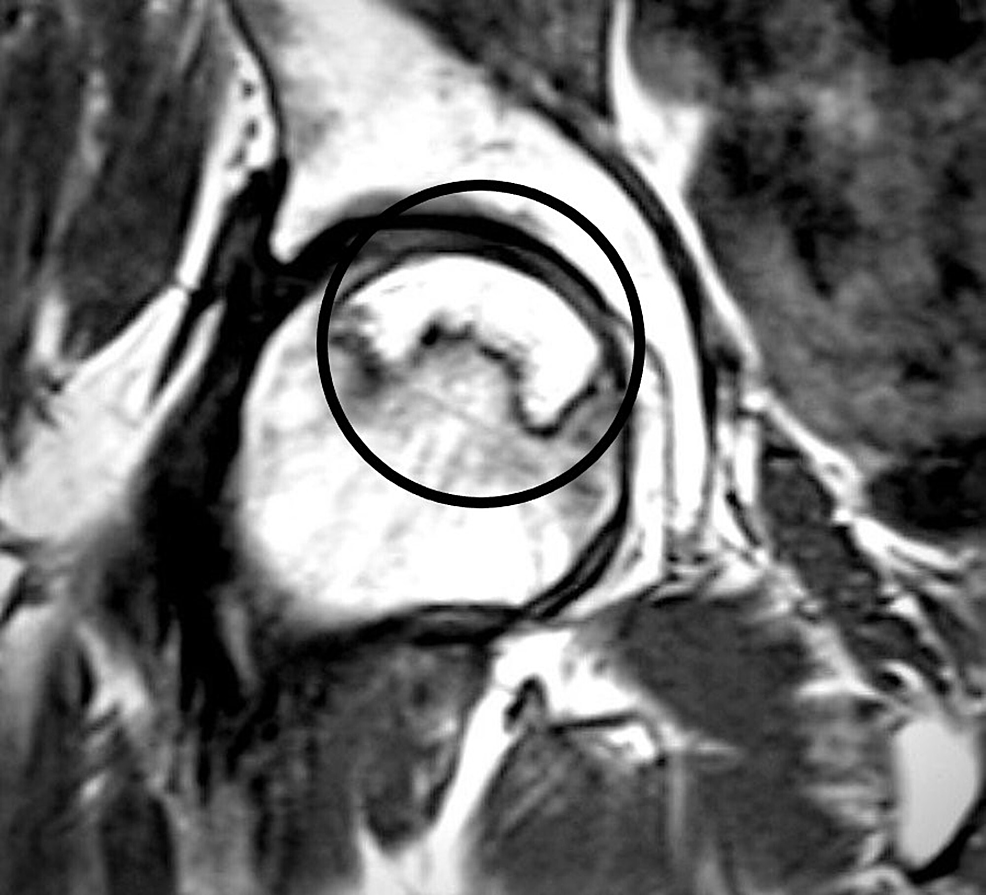 In the literature, there are several classification systems used to determine the ON stage for prognosis and assist with treatment decisions. The two most common classifications used in the diagnosis of ONFH are the Ficat and Arlet classification and the Steinberg (University of Pennsylvania) classification [9]. There are three important factors for prognosis: the extent of the osteonecrosis lesion, the location of the lesion within the femoral head, and the presence of bone marrow edema in the proximal femur.

Nonsurgical management starts with observation or protected weight bearing. It has a very limited role in the treatment of ONFH except for the follow-up of small asymptomatic lesions until they become symptomatic.

Biophysical modalities have been used as well with limited success, such as extracorporeal shock waves and pulsed electromagnetic fields, but information on their use is sparse.

Enoxaparin may prevent the progression of primary hip ON in patients with thrombophilia or hypofibrinolytic disorders [10]. Alendronate (bisphosphonate) to treat early-stage osteonecrosis was evaluated in two randomized trials, with conflicting results. The theory was the activity of osteoclasts could be inhibited to prevent or delay the collapse of the femoral head [11].

Hyperbaric oxygen therapy is a suggested joint-preserving treatment for symptomatic early-stage ONFH but is especially beneficial in Stage 1 and Stage 2 [12].

Core decompression has been widely used to treat early-stage ON and is intended to reduce intraosseous pressure in the femoral head, restore vascular flow, and improve pain. The procedure can be performed with a single core tract of varying size or with multiple small core tracts (Figure 6) [13-14]. 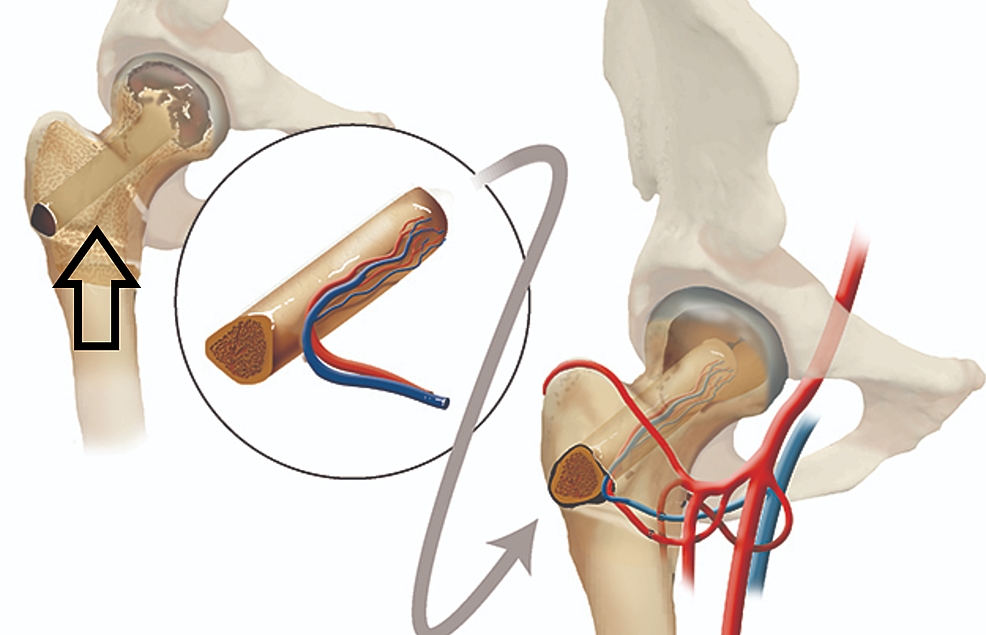 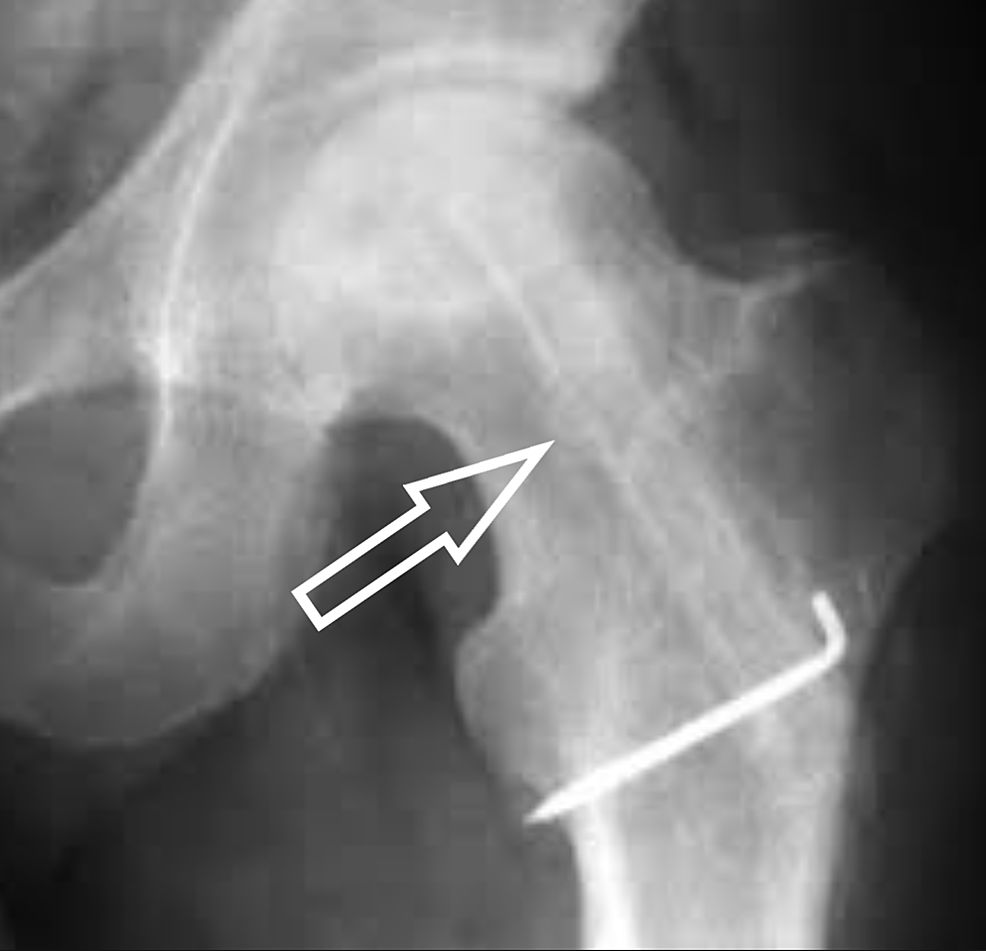 X-ray showing bone grafting after decompression with the help of k-wires (Kirschner wires).

A tantalum implant has been used as an alternative to bone grafting following core decompression. The tantalum implant should provide mechanical and structural support to the necrotic area, enhanced bone ingrowth given its highly porous nature and osteoconductive micro-texture (Figures 9-10) [17-18]. 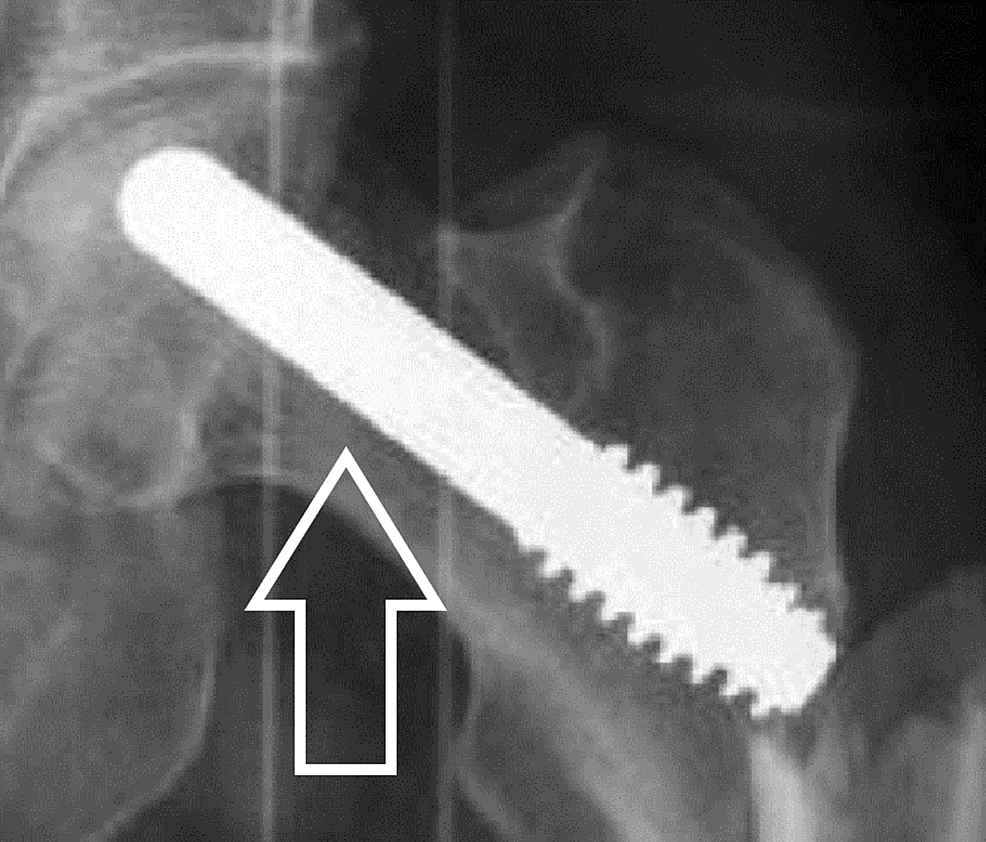 Tantalum rod in vivo highlighted by an arrow.

Osteotomies are another modality for treatment, with a goal to prevent femoral head collapse by transposing the osteonecrotic area from a weight-bearing to a non-weight-bearing area of the hip joint, thereby diverting mechanical stress from the lesion to healthy bone. Two types of osteotomies have been used: trans-trochanteric rotational osteotomies (anterior or posterior) and intertrochanteric varus or valgus osteotomies. The trans-trochanteric technique is popular in Japan, and its efficacy depends on the size of the osteonecrotic lesion. Trans-trochanteric osteotomies require a sufficiently large area of healthy bone and are technically demanding; the conversion of failed cases to total hip arthroplasty (THA) may be difficult (Figure 11) [19-20].

Total hip replacement is the surgical treatment that most reliably achieves pain relief and provides prompt functional return with a single procedure [21-22]. Patients with ON had a significantly higher dislocation rate than did patients with osteoarthritis because ON patients usually have a better preoperative range of motion compared with a patient with long-standing osteoarthritis. The revision rate in patients younger than age 50 with osteonecrosis was significantly higher compared with that in patients in the same age group with osteoarthritis [23-24].

When preparing an acetabulum in an osteonecrosis hip, the surgeon must remember that the bone quality may be poor secondary to corticosteroid use, lack of weight bearing, or the underlying disease.

Resurfacing arthroplasty preserves bone and does not compromise subsequent conversion to THA. THA may be a viable option in the management of post-collapse ON in young patients with good bone stock [25].

Advanced osteonecrosis shown in the circle.

X-ray showing bone grafting after decompression with the help of k-wires (Kirschner wires).

Tantalum rod in vivo highlighted by an arrow.