Infective endocarditis (IE) secondary to Staphylococcus lugdunensis has been increasingly recognized since 1988. IE-related thromboembolism represents an associated complication of the disease and carries a dismal prognosis. However, the incidence of cerebrovascular accident secondary to S. lugdunensis IE is relatively uncommon and its treatment has not been clearly elucidated yet.

Eighteen cases (mean age of 47.8 years, 55% male) from 17 publications with S. lugdunensis-related cerebrovascular accident (CVA) were identified. Of these, 16 (87%) cases were left-sided endocarditis and 10 (61%) cases experienced right-sided neurological deficit. The source of infection was documented in eight cases (50%) in which four cases (50%) were related to groin-related procedures and the mitral valve (52.5%) was mostly infected followed by aortic valve (37%). Surgical valve replacement was done in 61% of patients and overall mortality rate was 22%.

S. lugdunensis endocarditis is associated with high mortality and morbidity, including a higher prevalence of CVA. Early disease identification with aggressive intervention is crucial for better outcomes.

Infective endocarditis (IE) has long been recognized and treated over three centuries starting from 1674 when Lazare Riviere first noticed IE as a disease [1]. The overall annual incidence of IE varies from 3 to 7 per 100,000 person-years in the global population study while Bor et al. reported that approximately 40,000 IE cases/year with a 14.5% mortality rate occurred in the USA [2,3]. IE can be caused by various pathogens including bacteria and fungus although the former is more common. Due to frequent invasive procedures such as cardiac catheterization, defibrillator and central line placement, Staphylococcus aureus has become the most causal organism followed by Streptococcus species with an estimated incidence of 49.3% and 24.7%, respectively [2].

Coagulase-negative Staphylococci (CoNS) is known to be a nonpathogenic commensal in individuals with normal immune response. However, this concept changed when Staphylococcus lugdunensis, a member of the CoNS group, was first identified as a causal pathogen of IE in 1988 by Freney et al. [4]. Although most CoNS tend to have more latent pathogenicity, S. lugdunensis is an exception with a higher degree of virulence similar to Staphylococcus aureus. S. lugdunensis often requires immediate and aggressive treatment including surgical intervention. Embolic complications related to IE represent a more severe endpoint of the disease including S. lugdunensis endocarditis-induced embolic stroke. The question regarding how and when to start treatment remains unclear as no definitive management plan is described in the guidelines.

This review article aims to evaluate the clinical presentation, characteristics and risk factors, as well as the necessity of surgical treatment in cerebrovascular accident (CVA) due to S. lugdunensis endocarditis. 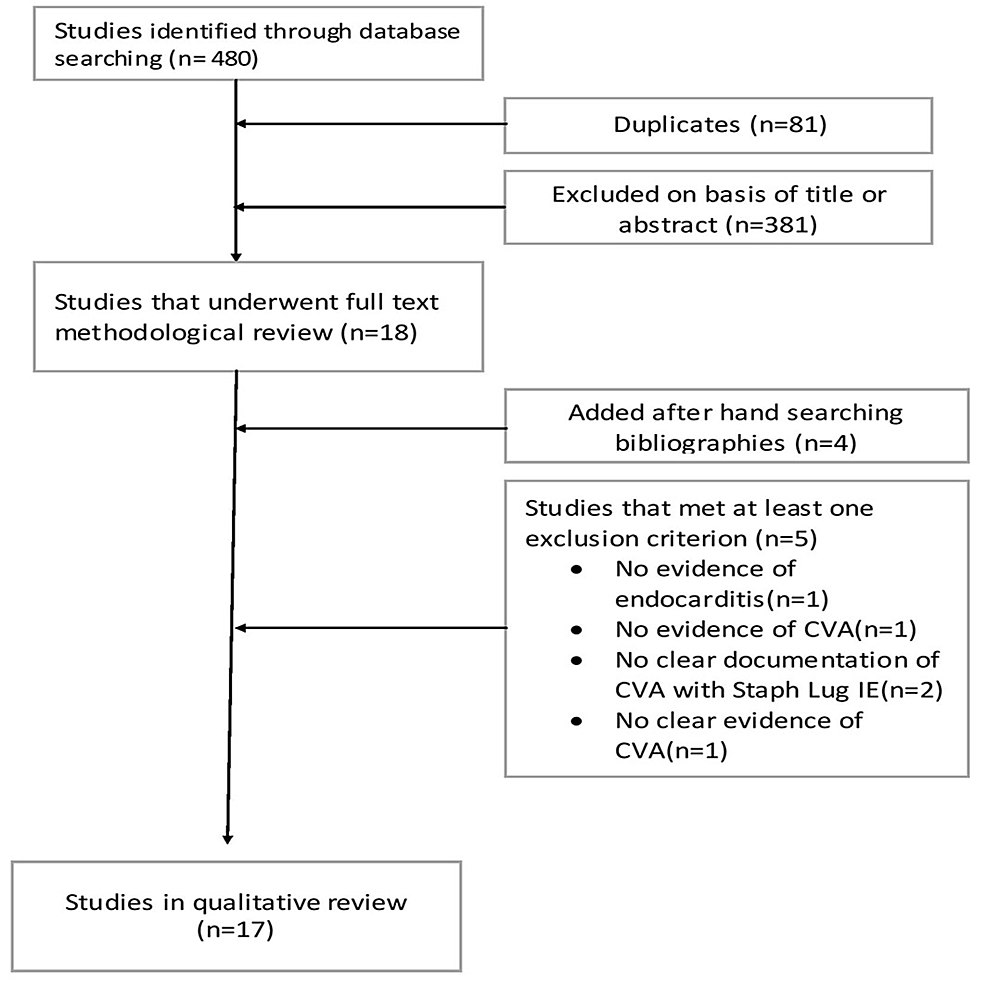 The risk factors associated with Staphylococcus lugdunensis are intravenous drug abuse, previous history of infective endocarditis, and surgical intervention in the groin area. Among patients with a documented source of infection, four cases (50%) were noted to have either vasectomy or femoral catheterization. No previous history of IE was reported in any of the cases.

Left-sided IE is the most common site involved, accounting for 94.7% of all total cases in which mitral valve, aortic valve, or both amounted to 52.5%, 37%, and 5.2%, respectively (Table 3). Foreign body-related IE comprised three cases including one case with pacemaker-related endocarditis and two cases of prosthetic valve IE. Sixteen individuals (88.88%) were found to have vegetations on echocardiogram with the largest measuring 3 cm x 3 cm in diameter on the mitral valve. The neurological deficit was mostly located in the right side (61%) with facial palsy in 17% and left-sided hemiparesis in 11% (Table 2).

Blood culture remains the gold standard to diagnose this type of bacteria and it should be in the differential whenever coagulase-negative Staphylococcus growth is present. Once S. lugdunensis is isolated, early antibiotic therapy and surgical intervention should be considered.

Antibiotic sensitivity testing showed methicillin susceptibility in most of the cases except one case (5.5%) which had penicillin resistance and was consistent with the previous reported literature. In studies by Anguera et al. and Hellbacher et al., S. lugdunensis was susceptible to penicillin with a rate of 84% and 85%, respectively [22,23]. Most of the cases were treated with sensitivity-guided medical therapy but 12 cases (66.6%) were eventually required to undergo surgical treatment. This particular finding is relatively higher than other pathogens including S. aureus.

Anguera et al. had reported a four-year study of IE in which surgical intervention was performed in Staphylococcus aureus IE (~37%), Staphylococcus epidermidis (~60%), and Staphylococcus lugdunensis (~70%) [22]. Another national study done by Ferreiros et al. and Krcmery et al. showed that surgical treatment with valve replacement was done in 26-42% of IE caused by all pathogens [24,25]. Despite S. lugdunensis IE-related CVA being mostly methicillin/penicillin sensitive, it is less likely to be eradicated by medical therapy alone and often requires surgical intervention.

Perhaps extrapolating from our experience in treating CVA associated with S. Lugdunensis IE, early surgical treatment was often required to have a better outcome. However, the latest 2015 AHA guideline has failed to mention any specific recommendation for this disease entity [26]. Thus, clinicians will have to make a decision based on their clinical experiences which could create a heterogeneity in disease management.

Unlike other organisms, S. lugdunensis is characterized by an insidious clinical course resulting in a higher mortality. The mortality rate was 22% (four out of 18 cases) but only one case out of 11 cases that underwent surgical intervention expired compared to those with medical treatment (8.3% vs 37.5%) (Table 3).

Anguera et al. disclosed that the changes in mortality rate before and after 1995 were primarily due to earlier recognition of S. lugdunensis with more aggressive management including surgical intervention [22]. According to the two studies done in 1993 and 2003, the mortality rate was 16% due to CoNS IE as well as 22.4% with S. aureus IE, which had a reduced mortality rate than our review [27,28]. In a 2010 review article done by Liu et al., among 68 patients with S. lugdunensis infective endocarditis, the mortality rate was 38.8% [29]. Although there are no randomized controlled clinical trials given the disease rarity; based on the above data and past experiences, we can at least extrapolate that early surgical intervention would be a reasonable approach especially in those with CVA related to S. lugdunensis IE.

Compared to other organisms, S. lugdunensis seems to display a higher propensity to cause CVA in our review. In addition, embolic stroke secondary to S. lugdunensis IE appears to have a higher incidence in middle age men than women. Invasive procedures such as catheterization and vasectomy should be performed with proper sterile protocol to help reduce S. lugdunensis bacteremia or endocarditis. Although broad-spectrum antibiotics are typically the first medical treatment option, some patients may require a valve replacement surgery suggesting a higher virulence compared to other CoNS organism. The efficacy of medical therapy alone compared to the possible superiority of early surgical approach needs further investigation. However, it is challenging to conduct future large-scale studies to clarify the exact timeline of the surgical approach as S. lugdunensis endocarditis-related embolic stroke is a rare disease.

© Copyright 2018
Kyaw et al. This is an open access article distributed under the terms of the Creative Commons Attribution License CC-BY 3.0., which permits unrestricted use, distribution, and reproduction in any medium, provided the original author and source are credited.