Background: Increase in visceral adiposity is characteristic of polycystic ovarian syndrome (PCOS) and is the main cause of insulin resistance and hyperandrogenism. This study tried to compare the visceral adiposity index (VAI) in PCOS women and control population, thereby exploring its correlation with ovarian morphology, hormonal and metabolic dysfunction.

Conclusion: VAI is higher in women with PCOS. It correlates positively with features of disease severity and ovarian morphology. An assessment of VAI in PCOS women could be predictive of a greater propensity for development of classical metabolic risk factors.

Polycystic ovarian syndrome (PCOS) affects 15-20% of reproductive-age women and has profound and far-reaching metabolic implications [1-3]. Insulin resistance and hyperinsulinemia are key factors in the pathogenesis of PCOS. PCOS has a characteristic increase in visceral adiposity which plays a major role in insulin resistance, compensatory systemic hyperinsulinism and hyperandrogenism [4,5]. Visceral adiposity is a surrogate marker for adipocyte dysfunction in the body. Visceral adiposity is best assessed by visceral computed tomographic scan which is both labor and cost intensive and is therefore not feasible out of a research context. Visceral adiposity index (VAI) is a mathematical model which uses simple anthropometric measurements and serum lipid parameters to reflect the visceral adiposity and insulin resistance. Because of its higher specificity and sensitivity as compared to the classical parameters (like body mass index, waist circumference, and lipids concentration), it is highly useful for cardiometabolic risk assessment [6,7]. VAI is now regarded as a surrogate marker of the function of adipose tissue and is directly proportional to the cardiometabolic risk among reproductive-age women [7]. Visceral adiposity and insulin sensitivity are both considered markers of metabolic risks in PCOS. There is no fixed cut-off value of VAI for the prediction of different parameters of cardiometabolic risk. It is a sex-specific index calculated in females by the formula [8]:

where the WC is waist circumference in centimeters, BMI is basal metabolic index in kilograms/square meters, and TG (triglyceride) and HDL (high-density lipoprotein) concentrations are expressed in mmol/L.

In females with PCOS, visceral adiposity causes premature atherosclerosis, thereby leading to low-grade chronic inflammation in the major blood vessels and increased cardiovascular mortality and morbidity. The metabolism of cortisol and sex steroids in visceral fat is altered. As a result, there is alteration in the secretion of adipokines such as leptin, which directly exert their effects on the ovary [7]. The Androgen Excess and PCOS Society has recommended that assessment of women with high BMI and cardiometabolic risk is mandatory in clinical practice [9]. Therefore, it is recommended now that visceral adiposity assessment should be performed irrespective of overall obesity for early prediction of cardiovascular morbidity in patients with PCOS and plan therapeutic plans accordingly.

The study compared the VAI in PCOS women versus non-PCOS controls and explored the correlation of VAI with menstrual disturbance, ovarian morphology, hormonal and cardiometabolic dysfunction in PCOS and non-PCOS women. Systolic and diastolic blood pressures, serum lipid profile and homeostatic model assessment of insulin resistance (HOMA-IR) were used to assess the cardiometabolic dysfunction in PCOS. This case control study was conducted in the Gynecology outpatient clinic of a tertiary care medical college over a period of one year. During the study time frame, 45 reproductive-age women (18-45 years) who fulfilled the 2003 Rotterdam Criteria for PCOS were recruited into the study [10]. The control population consisted of the same number of reproductive-age women (18-45 years) attending the Gynecology outpatient clinic who did not fulfill the 2003 Rotterdam Criteria. Informed consent was obtained from all participants. Institutional ethics committee approval was taken prior to commencement of the study. PCOS was defined as the presence of at least two of the following [10]: oligo or anovulation (less than nine menses per year); hyperandrogenism (hirsutism defined as Ferriman- Gallaway score more than eight with or without acne); hyperandrogenemia (serum testosterone > 0.8 nanogram/milliliter); and polycystic ovaries (>12 follicles of 2 to 9 mm in one or both ovaries or increase in the ovarian volume > 10 milliliters).

Participants were excluded from the study if they had existing endocrine disorders like Type 2 diabetes mellitus, abnormal thyroid function, Cushing’s syndrome, adult-onset congenital adrenal hyperplasia or hyperprolactinemia, any autoimmune disorders, overt hypo or hyperthyroidism, hepatic or renal dysfunction. Participants already on hormonal treatment and/or insulin-sensitizing drugs were also excluded from the study. Clinical data included history of menstrual irregularity, acne or hirsutism, number of menstrual cycles per year, relevant past history and family history, blood pressure (BP), Ferriman Gallaway (FG) Score, presence or absence of acne and acanthosis nigricans. Amenorrhoea was defined as absence of spontaneous menses for six months. Oligomenorrhoea was classified as severe for fewer than six cycles per year and mild for six to eight cycles per year. Hirsutism was defined as FG Score more than eight. Anthropometric data were obtained. BMI was calculated as weight (kilogram)/ square of height (meter).

A trans-vaginal (in ever-married women) or a trans-abdominal sonogram (in unmarried women or women unwilling for transvaginal scan) was conducted on the second to fifth day of spontaneous or progesterone induced menses to look for polycystic ovaries and ovarian volume on the Philips Clear Vue 350 scan machine (Philips Ultrasound, Inc, Bothell, WA, USA). Antral follicle count (AFC) included all follicles between 2 to 9 millimeters. If a dominant follicle >10 millimeters or a persisting corpus luteal cyst was seen, the scan was repeated in the next cycle. Statistical analysis was performed by SPSS Package 16 (SPSS Inc., Chicago, IL, USA). Continuous variables were presented as mean ± SD. Rates and proportions were calculated for categorical data. Student T test was used to analyze continuous variables and χ2 Test for categorical variables. Regression analysis was performed to test the association between the variables in PCOS and VAI. P<0.05 was considered statistically significant. 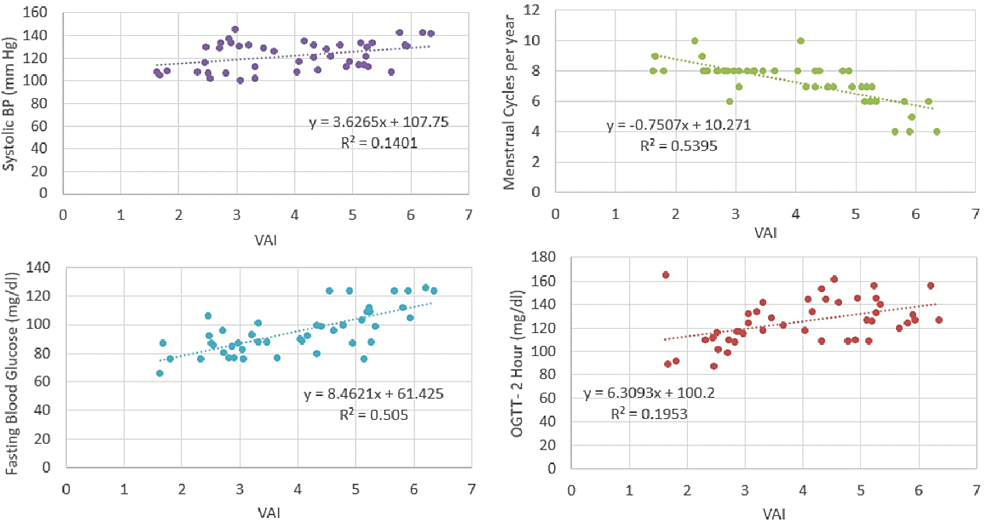 Figure 1: Correlation of VAI with severity of ovulatory and metabolic dysfunction in PCOS women

Table 2: Correlation of VAI with clinical, biochemical and sonographic features in PCOS women

Early onset adiposity has been implicated in the pathogenesis of PCOS and can be predictive of a more severe phenotype. It is also linked to the development of low-grade inflammation, greater cardiometabolic dysfunction and future risk of atherosclerosis [12-15]. Our data shows that as an indicator of visceral fat function, VAI correlates well with severity of menstrual dysfunction and ovarian dysmorphology, and seems to be predictive of impaired glucose tolerance, thus indicating propensity for development of diabetes in the future. More severe phenotypes (O+H+P) have been associated with higher VAI in PCOS women [8,16].

Recent studies have also shown that visceral adiposity is linked to the severity of anovulation, insulin resistance and cardiometabolic risk in women with PCOS [12,16,17]. We noted that increasing VAI was associated with longer menstrual cycles. Amato et al. have reported that oligomenorrhoeic subgroup of PCOS women had higher VAI than other PCOS women [16]. Similarly, another study has noted a significant inverse relation between VAI and luteal phase progesterone levels [8]. It was noted that both fasting and post-prandial blood sugars correlated positively with VAI in PCOS women, a similar trend was seen with increasing VAI in non-PCOS women as well, albeit with weaker strength. An Asian study has similarly also observed a positive correlation between VAI and OGTT correlation [18]. Other authors have demonstrated that VAI correlates inversely with insulin sensitivity evaluated by the euglycemic hyperinsulinemic clamp test [10]. Moreover, VAI cut-off of 1.675 has been proposed for identifying insulin resistance by Matsuda (< 25th percentile) [16]. A significant positive association has also been seen of VAI score with HOMA-IR score (OR: 0.82; 95% CI: 0.71-0.94) [8] and fasting hyperinsulinemia. Our study has not detected such an association. This could be attributed to our smaller sample size. We noted a positive correlation of VAI with systolic BP in PCOS women. Fonseka et al. have also noted this correlation [18]. In our study, increasing VAI correlated significantly with greater mean ovarian volume and antral follicle count. There is little literature exploring this relationship, and this association needs to be investigated further.

This study had a few limitations. It was a single center study. The sample size was less and randomization was done. There is no exact cut-off value of VAI for the prediction of different parameters of cardiometabolic risk in PCOS women. This study did not assess how menstrual irregularity and ovarian dysmorphology would have been affected in patients with high VAI without PCOS. Although VAI cannot be claimed as a diagnostic tool for ovulatory dysfunction, androgen excess, cardiovascular and cerebrovascular events, it indirectly reflects other non-classical risk factors such as altered production of adipose tissue cytokines, plasma-free fatty acids and increased lipolytic activity. Studies have shown correlation with metabolic and reproductive dysfunction, androgen excess, inflammation and liver function in PCOS women [16,19,20]. For these reasons, in the future, it is necessary to determine the precise cut-off reference value for identifying a more severe phenotype with increased cardio-metabolic risk in patients with PCOS. This could be useful for early preventive and therapeutic interventions in this high-risk group.

VAI, a marker for visceral adipocyte dysfunction, is higher in PCOS women that controls. It correlates positively with features of disease severity such as menstrual irregularity and ovarian dysmorphology. Additionally, it correlates with cardiovascular risk factors such as high blood pressure and higher blood glucose values. An independent assessment of VAI in PCOS women may help to isolate more severe phenotypes and could be predictive of a greater propensity for development of classical cardiometabolic risk factors.

Figure 1: Correlation of VAI with severity of ovulatory and metabolic dysfunction in PCOS women

Table 2: Correlation of VAI with clinical, biochemical and sonographic features in PCOS women