Percutaneous image-guided ablation is used for treatment of both benign and malignant osseous lesions often leading to substantial pain relief and local tumor control. Paired with vertebral augmentation of the affected vertebra, patients can often become functional and experience significant pain reduction. However, bone ablation must be paired with various modalities of treatment as it only provides pain relief and local tumor control and does not address systemic metastatic disease.

We describe a case of metastatic prostate cancer with epidural extension treated with percutaneous image-guided radiofrequency ablation and vertebral augmentation leading to substantial pain relief as well as resolution of the epidural disease as evidenced by short-term follow-up magnetic resonance imaging (MRI). To the best of our knowledge, the resolution of epidural disease has not been described before. This case highlights the potential of ablative therapy in metastatic bone disease, particularly in the presence of epidural disease.

Percutaneous image-guided ablation has become a common and effective management option for patients with benign and malignant osseous lesions. Multiple types of ablative modalities are available including radiofrequency, cryoablation, high intensity focused ultrasound, laser, and microwave techniques. Multiple studies have specifically centered around radiofrequency ablation for osseous lesions. Goetz et al. published the first case series in 2004 showing its palliative efficacy [1]. The safety and efficacy of radiofrequency ablation with vertebral augmentation is a safe and effective way to treat painful vertebral metastases [2-4]. The success of this technique to provide both pain palliation and the means to control local tumor spread has been well documented. However, extension of the metastasis to the epidural space is often an excluding factor for this treatment. This case describes the successful treatment of painful metastatic prostate cancer to the thoracic and lumbar spine and more importantly, the significant resolution of the epidural disease.

An 81-year-old male presented for consideration of vertebral augmentation due to diagnosis of stage IV, metastatic prostate adenocarcinoma, and worsening back pain. Lupron therapy was initiated at diagnosis four months prior. Docetaxel treatment was planned for six cycles but was subsequently stopped after the first cycle secondary to side effects. No radiation therapy was previously given. PSA level was 120.73 at diagnosis and 0.6 before radiofrequency ablation.

At the first appointment, the patient reported mild back pain and required a walker but was able to ambulate without difficulty. He did have pain upon palpation of the thoracolumbar junctional level. He did not have any neurologic deficit at presentation. Computed tomography (CT) scans showed 40% compression deformity of T12. Magnetic resonance imaging (MRI) showed pathologic involvement of T12 and L1 and metastatic involvement of the epidural component, resulting in 40% spinal canal stenosis (Figure 1). At this time, vertebral augmentation was recommended although it was believed the epidural component would not be addressed and Radiation Oncology would need to be consulted. In a short period of two months, the patient’s condition deteriorated where he was wheelchair bound due to severe pain, not controlled with NSAIDS or opioids. In addition, repeat studies showed further tumor infiltration involving T11, prompting augmentation of T11, in addition to T12 and L1. 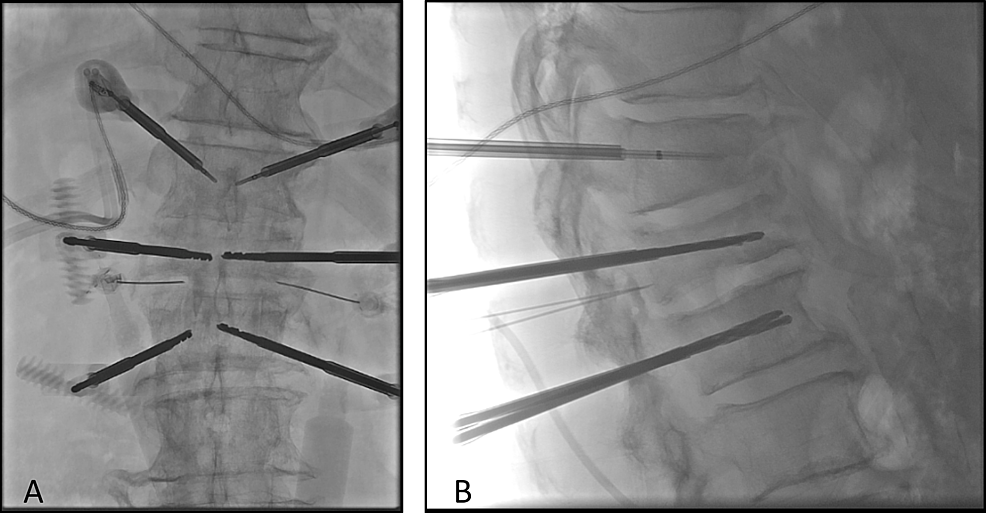 Figure 2: Intraoperative AP (A) and lateral (B) radiographic views 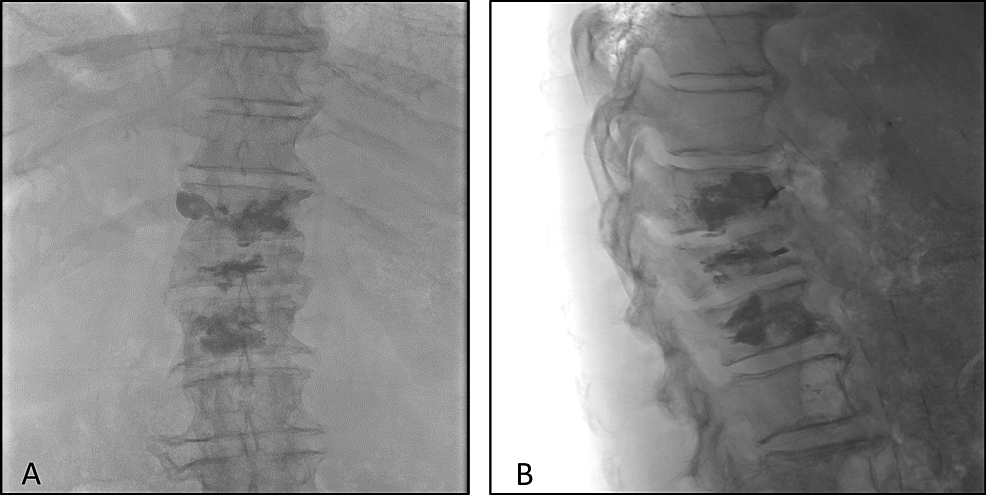 The patient reported no pain at the three-week follow-up and he was able to ambulate without assistance and continued to increase daily activities. He also no longer required any pain medication. He continued to be pain-free at the eight-week follow-up and repeat MRI showed stable vertebral changes and complete resolution of epidural disease at the T12 and L1 level (Figure 4). At nine-months post-op, the patient still had no pain and returned back to his normal activities.

Spinal metastases occur in a significant portion of cancer patients, estimated at 40%. As life expectancy increases, so will the number of these cases [5]. Spinal metastases often lead to severe pain and decline in quality of life that cannot be managed through pharmacological options. The lytic component of metastatic prostate cancer creates a local bone weakening effect. This contributes to both the painful aspect of the disease and increased risk for vertebral collapse. Image-guided radiofrequency ablation has great potential for providing significant pain relief for patients with metastatic disease of the spine as shown in this case. Multiple studies have demonstrated the efficacy of this treatment for improving the quality of life for these cancer patients [5].

Radiofrequency ablation leads to tissue breakdown through frictional heat created by high-frequency alternating current [6]. The zone of ablation created by the probe allows for controlled treatment of the target lesion. While ablation should not be used as the single treatment of metastatic cancer, it does have potential to control local tumor spread and may even lead to regression of surrounding tumor. One study showed 89% and 70% of local control at three months and one year post procedure respectively [7]. Ablation does not address the mechanical instability associated with these lesions, therefore, when paired with vertebral augmentation, the affected vertebra is stabilized to prevent future spinal complications.

© Copyright 2018
Holbert et al. This is an open access article distributed under the terms of the Creative Commons Attribution License CC-BY 3.0., which permits unrestricted use, distribution, and reproduction in any medium, provided the original author and source are credited.

Figure 2: Intraoperative AP (A) and lateral (B) radiographic views