This was a retrospective study of eight patients with Campanacci grade III giant cell tumors of distal radius treated with wide excision of distal radius followed by reconstruction at our institute. Four cases were operated on with ulnar translocation and four cases were operated on with ipsilateral proximal fibula grafting after wide excision of the distal radius. Patients were studied for the Musculoskeletal Tumor Society (MSTS) score and visual analogue scale (VAS) score for pain at one year, recurrence, and complications.

Wide excision of the distal radius followed by reconstruction with a proximal fibula or ulnar translocation is a good option to avoid repeated surgeries in patients with Campanacci grade III giant cell tumors of the distal radius and achieve acceptable functional results for the wrist and hand.

Giant cell tumors (GCTs) are locally aggressive benign bone tumors. They are commonly seen in epi-metaphyseal regions of long bones. The distal end of the radius is the third most commonly involved region after the distal femur and proximal tibia [1]. Of GCTs, 70% occur in the age group of 20-45 years [2]. Campanacci grade I and grade II GCTs of the distal radius are confined to bone and do not involve the surrounding soft tissues. They respond well to intralesional excision with extended curettage followed by filling the defect with autogenous or allogenous bone graft or bone graft substitute.

Campanacci grade III GCTs involve the surrounding soft tissues following a break in the cortex. Recurrence following extended curettage and bone grafting in Campanacci grade III lesions is high. According to a meta-analysis done by Liu et al., there was a five-fold increase in recurrence with extended curettage and bone grafting compared to en bloc excision followed by reconstruction [3]. Available reconstructive options after en bloc excision of the tumor include arthrodesis with vascularized or nonvascularized autografts like proximal fibula, distal ulna, iliac crest, or osteoarticular allograft transplantation or arthroplasty with a custom made prosthesis [4-9].

This was a retrospective study conducted by using medical records of eight patients diagnosed with Campanacci grade III GCTs of the distal end of radius treated with wide excision and reconstruction with ulnar translocation or nonvascularized proximal fibular autograft at Nizam's Institute of Medical Sciences, Hyderabad, India, between January 2016 and December 2021.

All patients presented with pain and swelling at the wrist joint. Patients were evaluated with radiographs and MRI. MRI was done to determine the presence of pathological fracture and the soft tissue extent of the tumor (Figure 1). 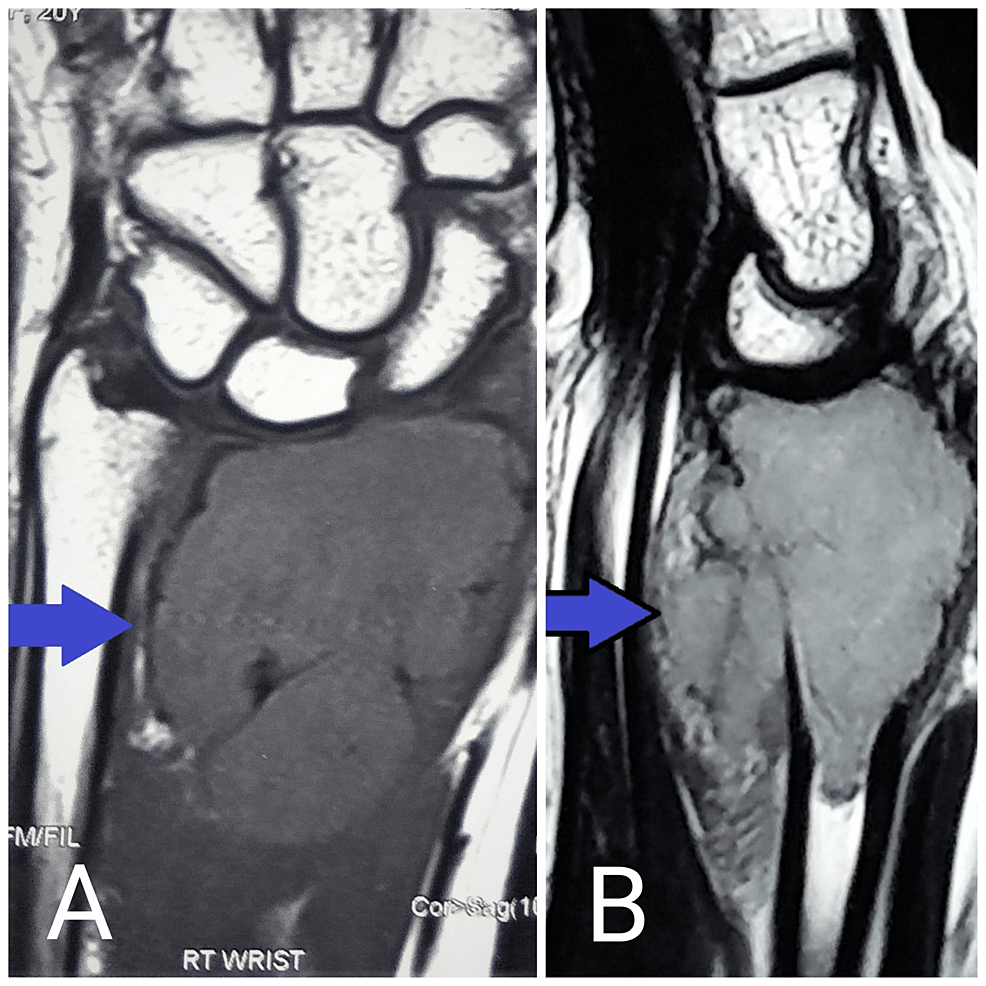 Patients were then planned for core needle biopsy. After histopathological confirmation of GCT, patients were subjected to definitive surgery. All patients were operated on under general anesthesia and tourniquet control. In all the cases, the distal radius was exposed by dorsal approach and the tumor was excised en bloc taking a clear margin of 2 cms (Figure 2). 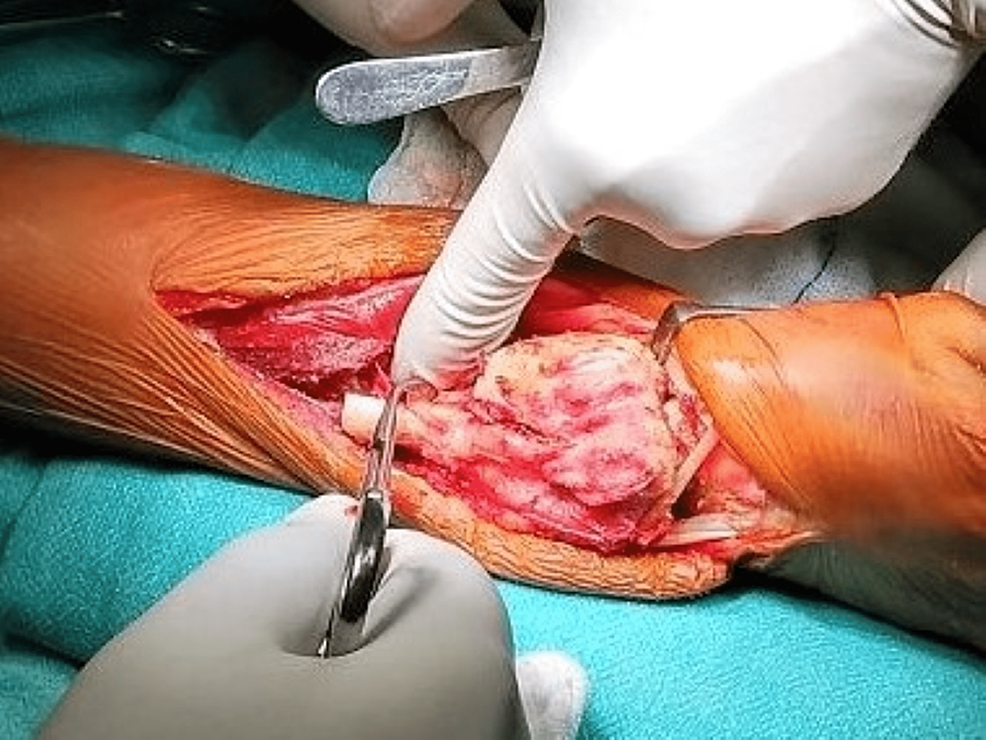 Reconstruction was done by ulnar translocation and arthrodesis or ipsilateral proximal fibular autograft. In this case series, four patients were treated with ulnar translocation and arthrodesis and another four patients were treated with ipsilateral proximal fibula autograft and arthroplasty following wide/en bloc excision of distal radius. All the subjects were assessed with MSTS score and VAS score for pain at one year, recurrence, and complications.

MSTS functional score system measures outcomes in six categories including pain, function, and emotional acceptance. For upper extremity weight lifting, hand position and lifting ability were recorded. Each parameter is scored 0 to 5 and combined for a possible total score of 30. Intermediate values of 2 or 4 were assigned, based on the examiner's judgment, when achievement or performance falls between the specified values (Table 1).

Pain relief is evaluated by VAS that grades pain from 0-10, where 0 is no pain and 10 is the worst pain. VAS score was recorded at every follow-up [11].

Table 2: Summary of eight cases included in the study 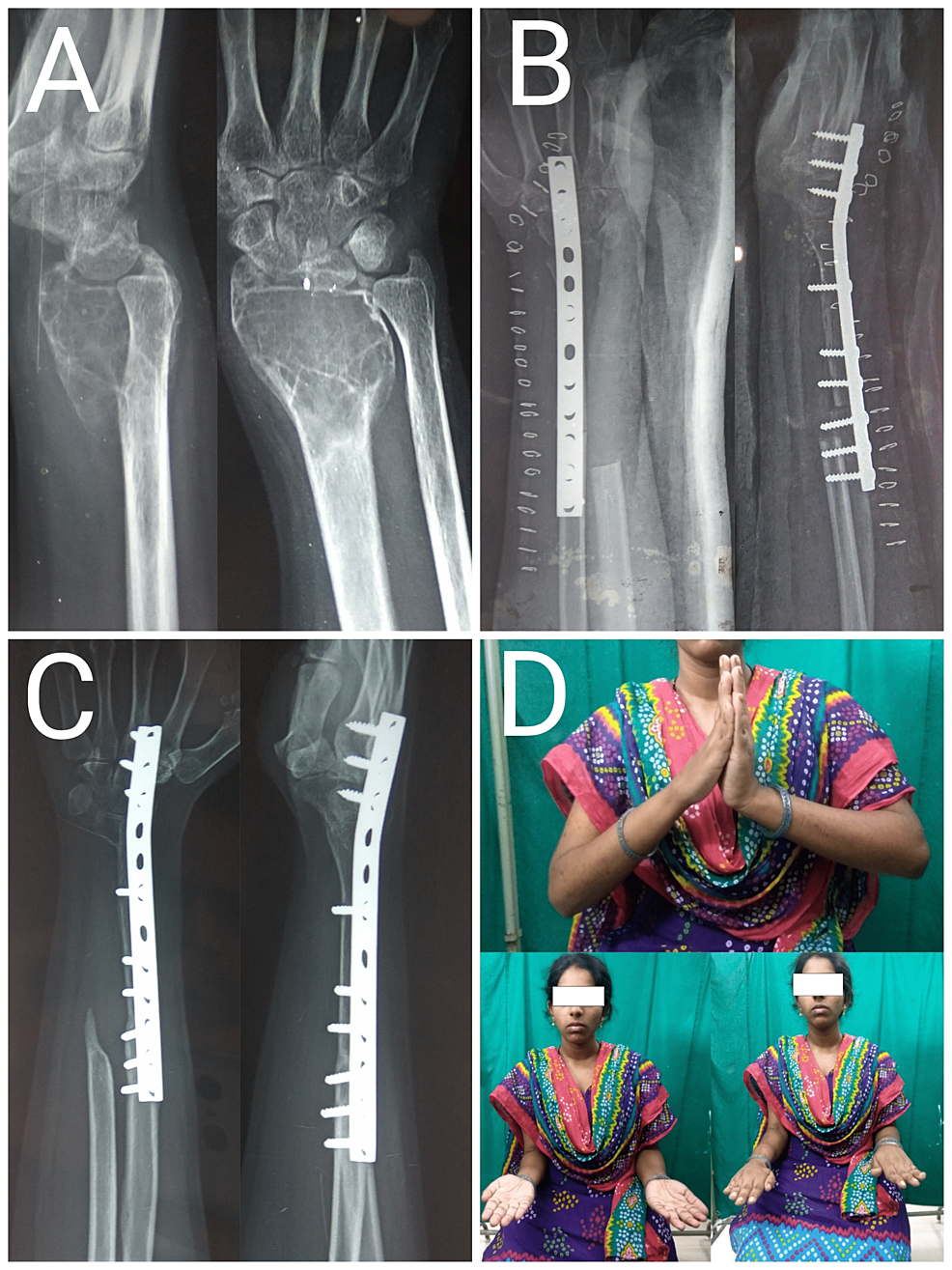 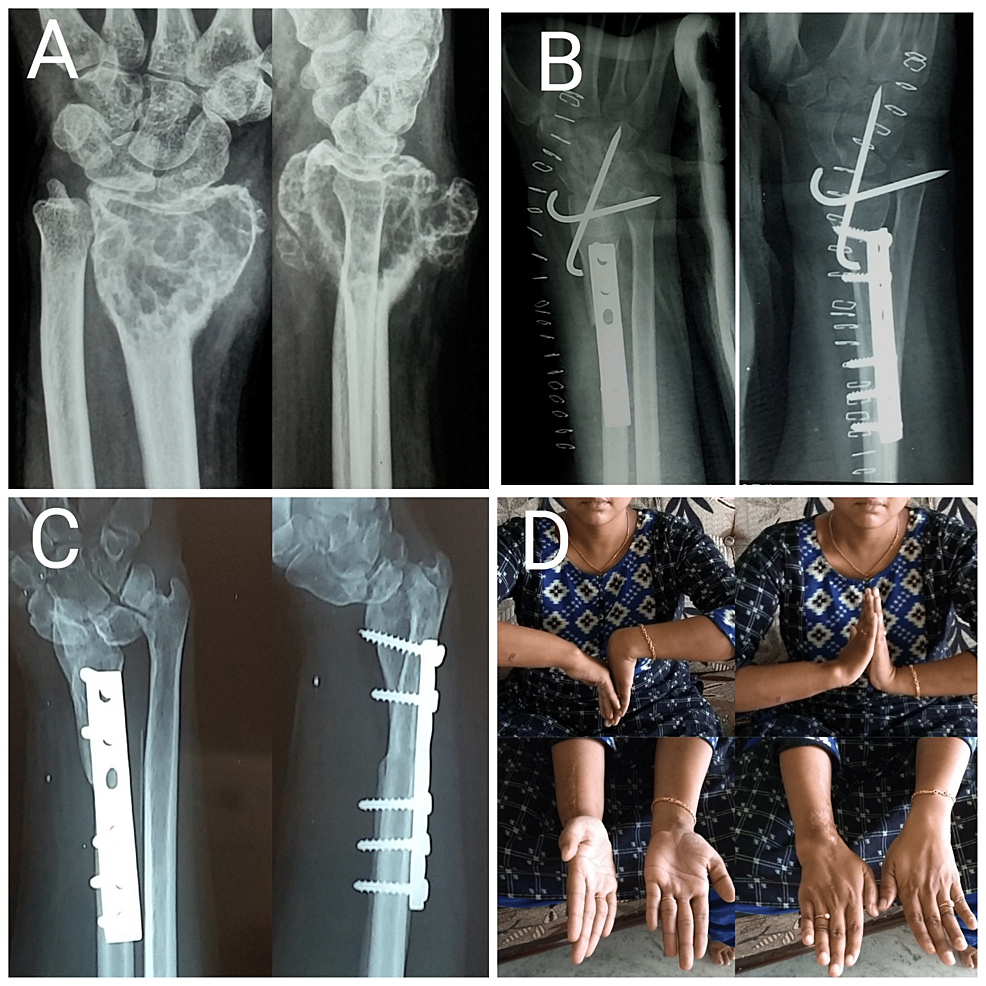 Management of Campanacci grade III GCTs of the distal radius is challenging due to the aggressive clinical behavior of the tumor and difficulty in reconstructing the radiocarpal joint owing to its complex anatomy [12]. Owing to the high risk of recurrence with extended curettage, wide excision of the distal radius followed by reconstruction with a suitable graft or prosthesis is preferred [13].

The morphology of the proximal fibula is similar to the distal radius and helps to form the wrist joint that allows an acceptable range of motion. The use of nonvascularized proximal fibula autograft to reconstruct the defect and wrist joint was described by Mays et al. [14]. This method has low donor site morbidity and relatively fewer major complications. Wrist subluxation, delayed union, nonunion, graft resorption, laxity of the lateral ligament at the knee, and peroneal nerve palsy are some of the known complications [5]. Wrist subluxation is the most common complication associated with proximal fibular grafting but it does not appear to reduce the functional outcome as seen in other studies [15-18]. Advantages of nonvascularized proximal fibula autograft is preserved movements at the wrist and cosmetically better-looking limb. Wide/en bloc excision and arthrodesis with ulnar translocation is another viable option that preserves forearm rotations and gives good grip strength. Disadvantages are complete loss of movement at the wrist and narrowing of the wrist and distal forearm giving an hourglass appearance to the upper limb.

In this study, we report eight cases of Campanacci grade III GCTs of distal radius managed with wide excision and reconstruction with an ulnar translocation or ipsilateral proximal fibular graft. The mean age in this study was 26.7 years, which was comparable to the study of Salunke et al. (29 years) [19]. The mean MSTS score in this study was 27.25 for the ulnar translocation group, which is slightly higher compared to the study reported by Salunke et al. and Puri et al. [19,20]. This may be due to the small sample size of this study. The mean MSTS score was 22.25 for the fibular grafting group and is significantly lower compared to the study of Saini et al. at 27.3 (91%) [16]. This was because of two recurrences in the fibular grafting group that affected MSTS score significantly. All the patients in this study had good pain relief with both the procedures with a mean VAS score of 1.62. In this study, two out of eight patients had local recurrence (25%). This was due to the aggressive nature of GCTs and excessive soft tissue involvement precluding complete tumor clearance despite the best possible surgical practices. These two patients were from the fibular grafting group and were reoperated with excision of the tumor and ulnar centralization described by Hey Groves [21].

Three patients had postoperative complications: one had persistent wrist pain and two patients had wrist subluxation. Wrist subluxation did not reduce the functional outcome of the procedure as both the patients were functionally doing well. There were no nonunions in both groups. There was no lateral ligament laxity or peroneal nerve palsy in fibular grafting cases. Review of the literature of previous studies with more than 10 cases is presented in Table 3.

In this study, we have taken only Campanacci grade III GCTs of distal radius as the study group, which may be considered a focused analysis. However, a comparison of ulnar translocation, fibular grafting, and distal radius prosthesis in a single study would be more useful in determining a standard treatment approach for Campanacci grade III GCTs of the distal radius. Small sample size, lack of control group, short follow-up, and retrospective nature of study are the limitations of this study.

Campanacci grade III GCTs of distal radius carry a high risk of recurrence following extended curettage and bone grafting. Wide/en bloc excision of distal radius followed by reconstruction with proximal fibular autograft or ulnar translocation is a reasonably good option to avoid repeated surgeries and achieve acceptable functional results for the wrist and hand. Both of these procedures are easy, do not need any microvascular procedures, and have fewer complications.

© Copyright 2022
Srikanth et al. This is an open access article distributed under the terms of the Creative Commons Attribution License CC-BY 4.0., which permits unrestricted use, distribution, and reproduction in any medium, provided the original author and source are credited.

Table 2: Summary of eight cases included in the study